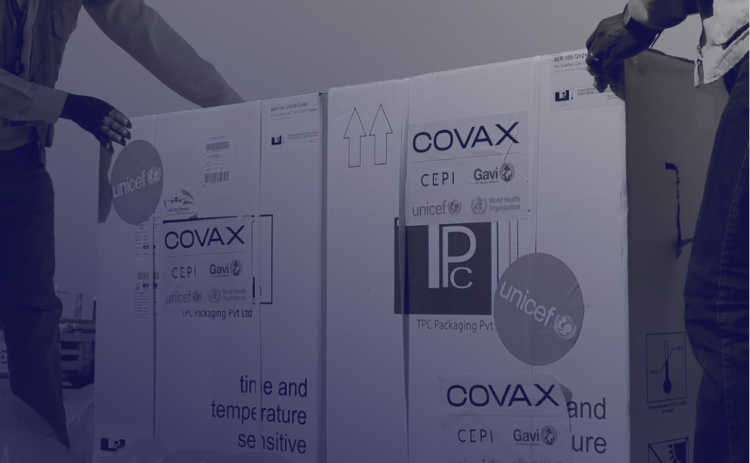 Image from the ‘End COVID for All’ coalition report: Shot of hope: Australia’s role in vaccinating the world against COVID-19.

Introduction by Croakey: A new report has been published this week looking at Australia’s role and responsibility in vaccinating the world against COVID-19 amid staggering global vaccine inequity.

The report comes from the #EndCOVIDForAll coalition, co-authored by an Expert Advisory Group of researchers, analysts, and leaders from a range of organisations, including the Burnet Institute, Australian Global Health Alliance and Médecins Sans Frontières Australia.

In the post below, originally published by the Development Policy Centre, the Burnet Institute’s Professor Brendan Crabb and Professor Mike Toole, outline the findings of the report, which urges action by Australia on ethical, public health, economic and self-interest grounds.

They note that, as New South Wales and Victoria make their way towards 80 percent fully vaccinated, joining elite ranks globally, the African continent has been able to administer just one dose to just seven percent of its population.

In a separate statement today, MSF Australia called on Australia, and other high income countries, to commit to a concrete vaccine redistribution timeline by the end of October to save lives, saying it’s estimated Australia will have 22 million surplus doses by the end of 2021.

It said that, despite the desperate need for vaccines in lower income countries, pharmaceutical corporations continue to prioritise sales to the wealthiest countries. As a result, 56 countries had missed the World Health Organization’s conservative target of 10 percent vaccination coverage for every country around the world by the end of September.

Last month Amnesty International released a report — A Double Dose of Inequality: Pharma companies and the Covid-19 vaccines crisis, saying that the six pharmaceutical companies at the helm of the Covid-19 vaccine roll-out are “fuelling an unprecedented human rights crisis” through their refusal to waive intellectual property rights and share vaccine technology.

On Monday, the ‘End COVID for All’ coalition launched its report Shot of hope: Australia’s role in vaccinating the world against COVID-19.

On the same day, the New York Times reported that around 48 percent of the world’s population had received at least one dose of a COVID-19 vaccine.

The African continent has administered one dose to just seven percent of its population.

Globally, more than 238 million cases have been reported and almost five million deaths, although the actual number could be as high as 13 million, the majority in low and middle income countries (LMIC).

The COVID-19 pandemic has had far reaching impacts. It is the biggest health, economic and societal disruption since World War II. Even countries that have had very few COVID-19 cases, such as some Pacific island countries, have suffered substantially from the effects on tourism, trade and remittances.

Since the fourth SARS-CoV-2 variant-of-concern, now known as Delta, emerged in India, it has caused massive outbreaks in countries both rich and poor.

In the Asia-Pacific region, there have been unprecedented surges in India, Pakistan, Sri Lanka, Nepal and most of Southeast Asia.

Papua New Guinea (PNG) is enduring a third wave that is probably more severe than at any time since the pandemic began. The true number of cases is probably much higher than the official figures, given the low testing rates.

So, what are the concerns raised in the report? They are a mix of ethical, public health, economic and, interestingly, Australia’s self-interest.

The main self-interest angle is based on the likelihood that new, more infectious and vaccine-resistant variants of the coronavirus may emerge if it continues to circulate unchecked in poorly vaccinated countries.

A survey of 77 epidemiologists from 28 countries found that two-thirds believed that if we didn’t act fast enough, the virus would mutate within one year to the point where the majority of first-generation vaccines are rendered ineffective. This would have a profound effect on Australia and the rest of the world.

There are many other self-interest arguments; it will be very hard for tourism and business to flourish between countries with and without high levels of COVID-19.

And then there’s the moral argument, that it is unconscionable to allow the virus to continue to spread in the poor countries of the world, resulting in many deaths, overwhelmed health systems and further economic disruption, while rich countries open up and return to a pre-pandemic quality of life.

Close to home, we have seen the devastating impact of uncontrolled outbreaks – for example, between June and September this year, more than 82,000 Indonesians lost their lives to the Delta variant of COVID-19. An outbreak of a new variant could be even more catastrophic.

Globally, around 23 low income countries have such low rates of vaccination that, on current rates, they would not vaccinate 70 percent of their populations until after 2030.

The report offers a range of recommendations about how Australia can better contribute to vaccine equity in the region and, more broadly, across the globe.

Foremost among them is the need to increase Australian support to the global vaccine facility COVAX, in the form of an additional financial contribution of $250 million and the sharing of 20 million vaccines.

COVAX aimed to provide two billion doses in 2021, but so far has only delivered 341 million doses. The report proposes that Australia provide $50 million to address vaccine hesitancy in the region; this is urgent in PNG where misinformation is rife and is a major impediment to vaccine uptake.

Now that the pace of vaccinations in Australia is rapidly increasing, and Sydney, Canberra and Melbourne face the prospect of soon coming out of lockdowns, it is time to look outwards and demonstrate the generosity that has been the hallmark of Australian responses to previous global crises.

The return on this investment is likely to be immense. A fast evolving respiratory infection cannot simply be pushed to the poorer sidelines, as has been the case for other pandemics like HIV and tuberculosis.

Ending COVID-19 everywhere is not just an ethical imperative, it is essential for a healthier, more open, and economically stronger Australia.

Read the full report Shot of hope: Australia’s role in vaccinating the world against COVID-19.

Brendan Crabb directs Burnet Institute, a not-for-profit research and public health organisation that receives funding from federal and state governments for work on COVID-19 and other global health issues. Mike Toole is a chief investigator on a study funded by the National Health and Medical Research Council.

PrevPreviousOn the ground in rural NSW, what are the lessons for ‘living with COVID’?
NextAn urgent, timely reflection on a public health champion’s legacyNext