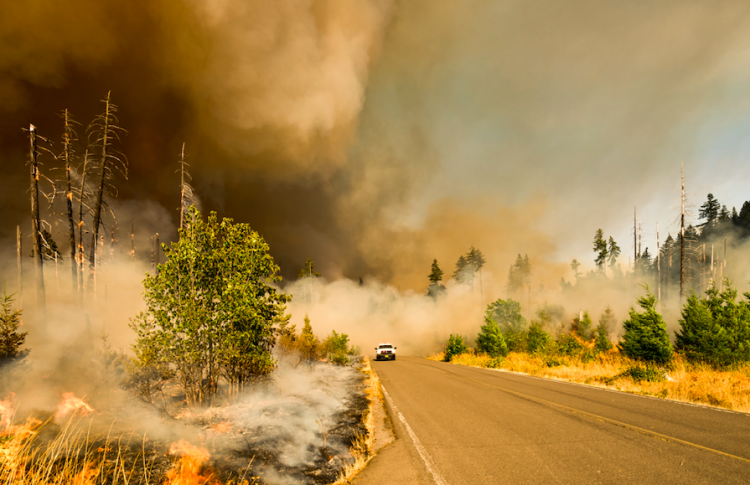 Is the media keeping up with the enormity of climate emergency coverage? Photo, Lowell fire, California: Marcus Kauffman/Unsplash

It says the year capped off a decade in which climate change hit hard around the world, ushering in “a new and dangerous era of megafires” that ravaged Australia, Brazil, Siberia and the US West Coast, as annual deaths from extreme heat worldwide are projected by 2100 to outstrip all COVID-19 deaths recorded in 2020.

So has the media reflected the scale and severity of the emergency facing the globe?

Recent investigations suggest that the media’s climate performance is improving, although the coronavirus pandemic may have bumped climate change off the agenda a little in 2020.

But they also reveal that quantity does not equal quality, reports Marie McInerney.

Her article is published as part of Croakey’s contribution to Covering Climate Now, a global journalism collaboration strengthening coverage of the climate story.

News outlets must commit to shared, sustained, and substantive climate journalism that meets the scale of the climate crisis and informs the public about potential solutions that could mitigate global warming’s worst effects, leading US media scrutiny group Media Matters for America says.

The call coincides with the release by Colorado University’s Media and Climate Change Observatory of its annual year-end retrospective, finding that the world’s media published and broadcast more climate change reports in 2020 than in any other year in the past 17 years, apart from 2019.

In Australia, the amount of climate change coverage by monitored outlets tripled in January 2020 compared with January 2019, as the country’s east coast was devastated by the 2019-20 summer bushfires.

But part of that Australian coverage included debate about the proven link between climate change and extreme weather disasters, due to “a narrative that’s been promoted for months by conservative Australian media outlets” that downplayed or rejected the role of climate change in the bushfire disaster, as the New York Times described it then.

This is also a key issue raised by Media Matters for America, an online not-for-profit monitor of US media misinformation, which warned that while 2020 saw important breakthroughs in coverage, climate still struggled to get on the agenda in 2020 and coverage was not necessarily good.

Lamenting that 2020 climate journalism did not live up to the high bar set in 2019, Media Matters for America said that not only did the quality of climate coverage decrease last year, but mainstream US news outlets “perpetuated some of their most egregious practices from years past”.

“News outlets must recognize that their audiences, and the public at large, are eager to hear news about climate change and commit to shared, sustained, and substantive climate journalism that meets the scale of the climate crisis and informs the public about potential solutions that could mitigate global warming’s worst effects,” it said in its wrap of the year.

The Media and Climate Change Observatory, which counts Australia’s University of New England among its global university partners, monitors climate change or global warming coverage in 11 languages and across 54 countries and 120 sources (TV, radio and newspapers), including outlets in Australia. It accesses archives through the Lexis Nexis, Proquest and Factiva databases and publishes detailed monthly reports as well as its end of year wrap.

The Observatory said that coverage dropped 23 percent in 2020 from 2019, the best year to date, continuing to fight for media attention amid other issues, including the coronavirus pandemic.

But climate change “nonetheless did not disappear from public conversations in 2020”, with global coverage still up 34 percent compared to 2018, continuing a trend of increasing coverage since 2015. Canadian and UK print coverage “reached all time highs in 2020”, it said.

“In fact, 2020 ranks second in terms of the amount of coverage of climate change or global warming (behind 2019) since our monitoring began 17 years ago in 2004,” it said.

Coverage ranged from Arctic and Antarctic ice loss to Zimbabwe locusts,  interwoven with stories of Australian and North American wildfires, floods in Bhutan, Bangladesh, Nepal, Sri Lanka and the UK, rainforest retreat in Congo and Russian heatwaves, it said.

Reports drawing the dots between these events and climate change drove the coverage, as did those on cyclones Nivar and Amphan, tropical storms Nangka and Saudel, typhoons Molave and Goni and hurricanes Nana, Eta and Iota.

The Observatory said political and economic-themed stories in 2020 included decarbonisation and renewables growth, corporate pledges for emissions reductions, divestment plans by BlackRock, the world’s largest asset manager, stories on the US Trump Administration’s regulatory rollbacks and climate policy “(in)action” and the 2020 US Presidential election.

“Many scientific-themed stories throughout the year included record-breaking global temperatures and new understanding of intersectional climate challenges (e.g. links between COVID-19 and climate change) and humans’ role in them,” it said.

But that quality was not universal, said Media Matters for America, which describes itself as a progressive research and information centre “dedicated to comprehensively monitoring, analyzing, and correcting conservative misinformation in the US media”.

In its end of year report card on climate coverage, it said some of the more “egregious” practices by mainstream media in 2020 included ceding the narrative to Rupert Murdoch’s Fox News, which had fed its audience “a steady diet of warmed-over climate denial, conspiracy theories, and disinformation for years”.

That had reached “a new crescendo during the waning days of the general election” and the network looked likely to continue attacking the possibility of climate action for the duration of President Joe Biden’s administration, as it sought to repeal the Trump administration’s environmental rollbacks and rejoin the Paris climate accord.

The centre said that while some of the decline in quality coverage of climate change by mainstream media could be attributed to COVID-19, even when there was a direct connection between climate and the pandemic, corporate TV news rarely covered it,” it said.

It analysed one week of broadcast TV news coverage during a heatwave in July 2020 that was subject to 40 segments broadcast by mainstream networks ABC, CBS, and NBC.

“The vast majority of mentions appeared during the networks’ weather forecasts, but none of these segments connected extreme heat to climate change,” it said. “Additionally, only three segments mentioned the heat in relation to COVID-19, and none explored the fact that extreme heat is disproportionately impacting minority communities.”

Despite that, the organisation said there were some notable highlights in climate coverage in 2020.

To the surprise of many, it said, Fox News anchor Chris Wallace led Donald Trump and Joe Biden into an 11-minute conversation about the climate crisis in their first presidential debate, “the first time in 12 years that a moderator raised the subject in a general election debate”.

Public pressure had, it said, made it “impossible for (Wallace) to ignore it” and the issue also took  centre-stage during the vice presidential debate, making it increasingly “untenable” for moderators to ignore the crisis.

But that did not mean quality scrutiny. It said moderators’ questions were far from perfect, often evinced a deep scepticism of the efficacy of climate action and were “framed around bogus right-wing media narratives”.

Media Matters for America said the sheer destructive power of the devastating 2020 US wildfire season had also shocked news media into climate coverage, spurred also by Trump’s denial of the link, and “for a brief moment, TV news outlets covered them as an indicator that the climate crisis is here, now”.

“For a moment, corporate TV news showed a glimpse of what robust climate coverage could look like,” it said, noting that on CNN, MSNBC, and Fox, 57 percent of the 150 wildfire segments aired during this time mentioned climate change, “a tremendous increase”.

That shift is likely to be well-received by audiences, it said, citing a September 2020 survey by progressive US polling firm Data for Progress that found that 77 percent of likely voters regarded it as important for news media to connect climate science to extreme weather events and that 71 percent wanted to hear if climate change is worsening an extreme weather event.

Among its highlights, Media Matters for America also included the Covering Climate Now partnership, comprising hundreds of media outlets across the globe — including Croakey — that are committed to climate journalism, describing it as “one of the most successful climate projects in recent years”.

This article is published as part of Croakey’s contribution to the Covering Climate Now initiative, an unprecedented global media collaboration launched last year to put the spotlight on the climate crisis, of which Croakey Health Media is a member. It is co-founded by The Nation and the Columbia Journalism Review (CJR), in partnership with The Guardian.

PrevPreviousInvasion Day 2021: No more about us, without us
NextNetwork connects Indigenous Knowledges in the Arctic and US SouthwestNext