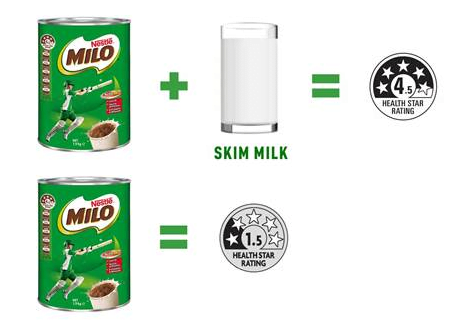 Time to close Health Star’s Milo Loophole: here’s why and how

At the heart of the problem, says Alexandra Jones from the George Institute for Global Health in the article below, is a provision that allows products to be rated ‘as prepared’ – that is, not as they come but how they are prepared for eating and drinking according to instructions on the label (which may or may not be followed).

A workshop on the ‘as prepared’ issue will be held in Melbourne this Thursday, as part of the government’s ongoing review of the Health Star Rating system.

Jones says the only viable decision for a system that requires trust and simplicity is to shift to an ‘as sold’ rating only, given that virtually all foods can be made up in different ways and combinations.

You can also read previous Croakey reports on the Health Star Rating system via this link.

If there is one reason why Australia’s front-of-pack Health Star Rating system has come under fire, it is the ‘Milo loophole’.

The chocolate powdered drink  loudly splashes 4.5 stars across its ubiquitous green tin. It’s a score that has led consumers and commentators to challenge Health Stars as dishonest, flawed and hopeless.

And it’s why the Federal Government is currently seeking feedback on how to fix this loophole, which impacts a variety of concentrated foods like cordials, seasoning mixes, packet soups, cake mixes and powdered drinks.

Right now ratings for these foods are awarded on the basis of how manufacturers claim their product should be prepared, and this can be substantially altered by the nutritional value of the suggested extra ingredients.

In Milo’s case, Nestlé says that’s three teaspoons of chocolate powder with a cup of skim milk for a score of 4.5 stars ‘as prepared’.

This conveniently ignores that most people drink full cream milk (skim makes up less than 3 per cent of all milk sales), not to mention overlooks the guilty pleasure of sprinkling Milo over ice-cream or eating it straight from the tin. The reality is that Milo powder ‘as sold’ would receive just 1.5 stars.

The problem for the government is that the media hasn’t just taken aim at food companies for exploiting this technicality. Instead media outlets have attacked Health Stars themselves.

This is disappointing given Australia’s system is at the forefront of international moves to provide simple, at-a-glance nutrition information. The food label will not be a silver bullet for Australia’s obesity crisis, but it is one of measures we dearly need to help people make healthier choices. No system is likely to start out perfect, but our research suggests Health Stars are getting it mostly right.

The committee that leads Health Stars has agreed the loophole needs to be addressed as a priority. Below are the four options that are on the table from the committee and our verdict on them:

A few bad apples must not spoil the whole bunch

Our analysis of around 40,000 Australian supermarket products in the George Institute’s FoodSwitch database suggests Milo really is an outlier here. Most ‘as prepared’ foods gain little from the current loophole, suggesting a return to a blanket ‘as sold’ would be fair. For example:

The few categories failing the ‘laugh test’ would be brought into line with consumer expectation:

It’s a well-worn industry tactic to delay public health policy by calling for more evidence and consultation. Despite agreeing the matter needs to be addressed ‘as a priority’, industry influence is clear in the prolonged review schedule for a fix, which now stretches far into 2018.

The ‘Milo loophole’ may not be the only area where Health Stars could be strengthened, but it is the one with the quickest and easiest solution.

Only about 4 per cent of supermarket products are affected by the relevant rule, and only one tenth of these currently carry a Health Star.  The cost of correcting – or simply removing – Health Stars on a few bad apples would be negligible and outweighed by the greater benefit obtained for all stakeholders in retaining the credibility of the system overall.

Technically speaking, the change should only require a clarification of terms in the Health Stars Guide for Industry. Twenty-five such changes have already been made without fanfare, including footnotes added in 2015 attempting to enhance clarity on the ‘as prepared’ issue.

Consumer trust is paramount to Health Stars working and government must act quickly to address and also resolve the Milo loophole by applying a blanket ‘as sold’ condition as a matter of priority. First and foremost Health Stars must work for consumers, not food companies.

The next stakeholder workshop on ‘As Prepared’ is in Melbourne on Thursday 12 October 2017.