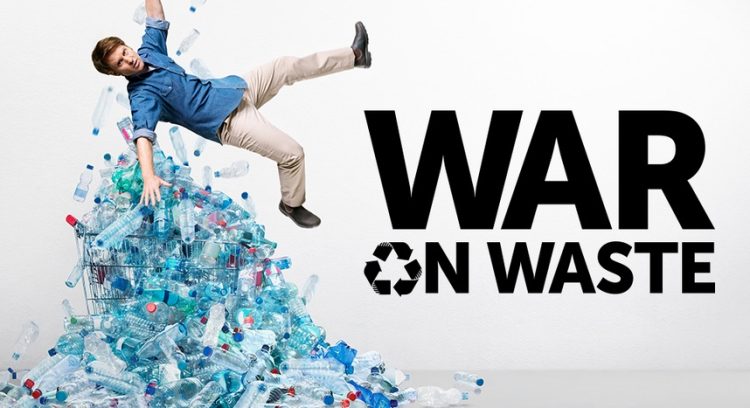 Time to declare war on wasteful and unnecessary health treatments?

The latest news from the movement to reduce unnecessary use of tests and treatments will be profiled at a conference in Melbourne tomorrow (30 May).

Marie McInerney is covering the 2019 Choosing Wisely Australia National Meeting for the Croakey Conference News Service. Follow the news on Twitter at #OKtoAsk2019.

Experts from very different worlds of media and medicine will share their insights on how to reduce overuse of medical tests and over-diagnosis of health conditions at the 2019 Choosing Wisely Australia National Meeting in Melbourne.

Craig Reucassel, the host of ABC TV’s hit series, War on Waste, will MC the event and share lessons on how the award-winning program sparked massive individual and community action to reduce Australia’s spiralling waste production.

Among many other powerful stunts over three seasons, the show packed more than 50,000 takeaway coffee cups into a Melbourne tram to highlight how many get thrown away every half hour in Australia, and also picked systematically through the rubbish of neighbourhoods and schools.

While the show also shone a big light on systemic waste issues, from excess packaging to the failure of recycling processes in Australia, it spread the message that “an enormous amount can change just by changing your habits and your awareness”.

Reucassel will be joined at the meeting by Trish Greenhalgh, Professor of Primary Health Care Sciences, who will deliver a keynote address on “the challenges of spread and scale-up”.

Greenhalgh leads a Knowledge into Action study program at Oxford University that investigates the gap “between what we know from research evidence and what we do in the clinic, at the bedside and around the policymaking table” that has remained stubbornly difficult to close despite a generation of research into implementation science.

She tweeted a preview of her talk before leaving the UK earlier this week. 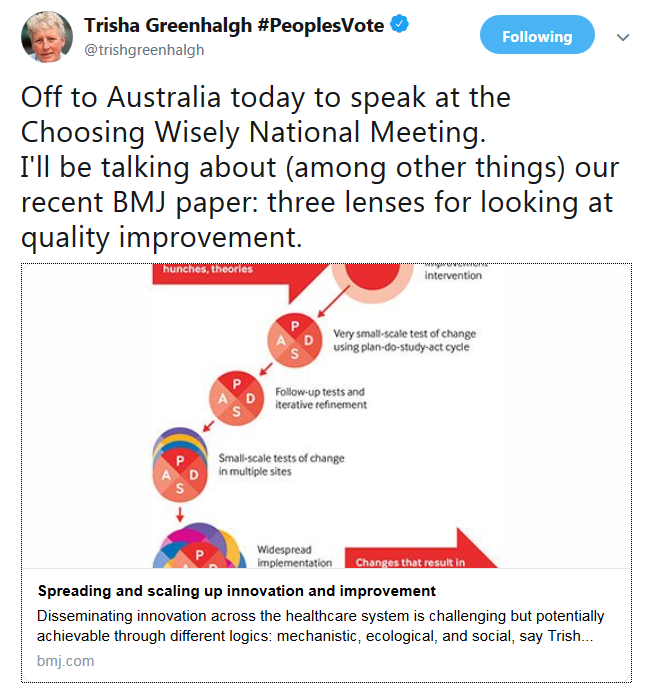 Both speakers will be able to offer different insights on key questions at the third annual Choosing Wisely meeting, to be attended by 230 health professionals, researchers, consumer advocates and government representatives from across the country.

The meeting will also hear how Victoria is delivering the first state government-funded “scale-up” of Choosing Wisely for 11 health services, an approach that’s being watched with interest by other states and territories.

Choosing Wisely has experienced significant growth since its launch in Australia in 2015, and now has 79 health and consumer organisations signed up as members and actively implementing ways to reduce unnecessary interventions.

They range from reducing unnecessary pathology tests across a number of emergency departments in Melbourne’s eastern suburbs to one health service’s focus on improving wound management after investigations revealed “duplication of services, inefficient use of consumables, high cost of consumables, repeat presentations and confusion for patients”.

Choosing Wisely has also helped generate 194 recommendations from peak medical and health colleges of the tests, treatments, and procedures that healthcare providers and consumers should question, from the use of antibiotics in patients with upper respiratory infections to imaging for non-specific low back pain.

Twenty-six recommendations were added in 2018, including an inaugural list from the Pharmaceutical Society of Australia (PSA) on prescription, over-the-counter and complementary medicines.

The PSA and other health groups may need to factor in different definitions of “unnecessary” and “harmful” following research showing that pharmaceuticals contributed to 19 per cent of the carbon footprint of Australia’s healthcare system, which was in turn responsible for seven percent of national greenhouse gas emissions.

This will be the first national meeting for Steve Morris, CEO of NPS MedicineWise,which facilitates Choosing Wisely in Australia.

Morris has previously been Chief Pharmacist for South Australia and Executive Director of SA Pharmacy and originally hails from the UK, where he was Deputy Chief Executive of the National Prescribing Centre.

He says he has joined Choosing Wisely at a “transformative time”, as it grows into new areas of healthcare education, advocacy and research, including a two-year investigation into how health professionals’ fears of being sued can lead to them prescribing low-value care.

Speaking to Croakey ahead of the event, Morris said Choosing Wisely is now looking to replicate the strong engagement it has seen so far from the hospital sector with the primary health care sector and to “turbo-charge” consumer engagement, with an overall focus on building scale and sustainability into service and system level initiatives.

There is much support in Australia and internationally for Choosing Wisely, which began in the US in 2012 and has spread to 22 countries worldwide, amid growing evidence that overdiagnosis and overtreatment are common, harmful to patients, and expensive.

There is also growing evidence of the initiative’s benefits, including reductions reported by US hospitals in unnecessary cardiac monitoring, inappropriate tests, imaging, and blood transfusions, according to an editorial published last year in the BMJ.

There’s been concern also that Choosing Wisely recommendations can focus too much on “low hanging fruit” and recognition in Australia also that many systemic issues, like fee for service funding, are critical drivers of unnecessary tests, treatments and medications.

Alison Verhoeven, CEO of the Australian Healthcare & Hospitals Association, told Croakey she welcomes how Choosing Wisely has engaged clinicians and consumers in a discussion about limiting low-value care, “which is important from the perspectives of safety and quality of care as well as costs of care”.

But low-value care is “only one part of the value equation”. She said:

There’s broader work to be done on: understanding and addressing variation in care; the outcomes that matter to patients; and how the health system might move from rewarding volume of care to incentivising high value care.”

Morris acknowledges the implications of these broader issues but says Choosing Wisely still can do very effective work without having to “pick a fight with some of the systems issues”.

A big part of that he says is through winning “heart and soul buy-in”, from clinicians, representative groups, health services and consumers, for cultural and behavioural change.

Some areas to target were highlighted recently by Choosing Wisely’s latest survey of GPs, specialists and hospital staff in member health services.

They identified that difficulties in accessing patient information from other clinicians is a common reason for requesting unnecessary medical tests, treatments or procedures, along with patient expectations, potential for medical litigation and uncertainty of diagnosis.

Published last year in The Medical Journal of Australia, they included:

Engagement of staff across all levels and disciplines is recommended, with a whole-of-hospital approach preferable (Table 2):

Allocation of sufficient resources to support implementation is critical. This includes:

Morris said Choosing Wisely does not want to spark pilot initiatives that “generate great enthusiasm but are easily forgotten” but rather to embed the principles into ‘business as usual’, such as Royal Brisbane Hospital has done.

“We want to demonstrate that you can build them to scale and then that they will be sustainable,” he said.

See the program and abstracts here.