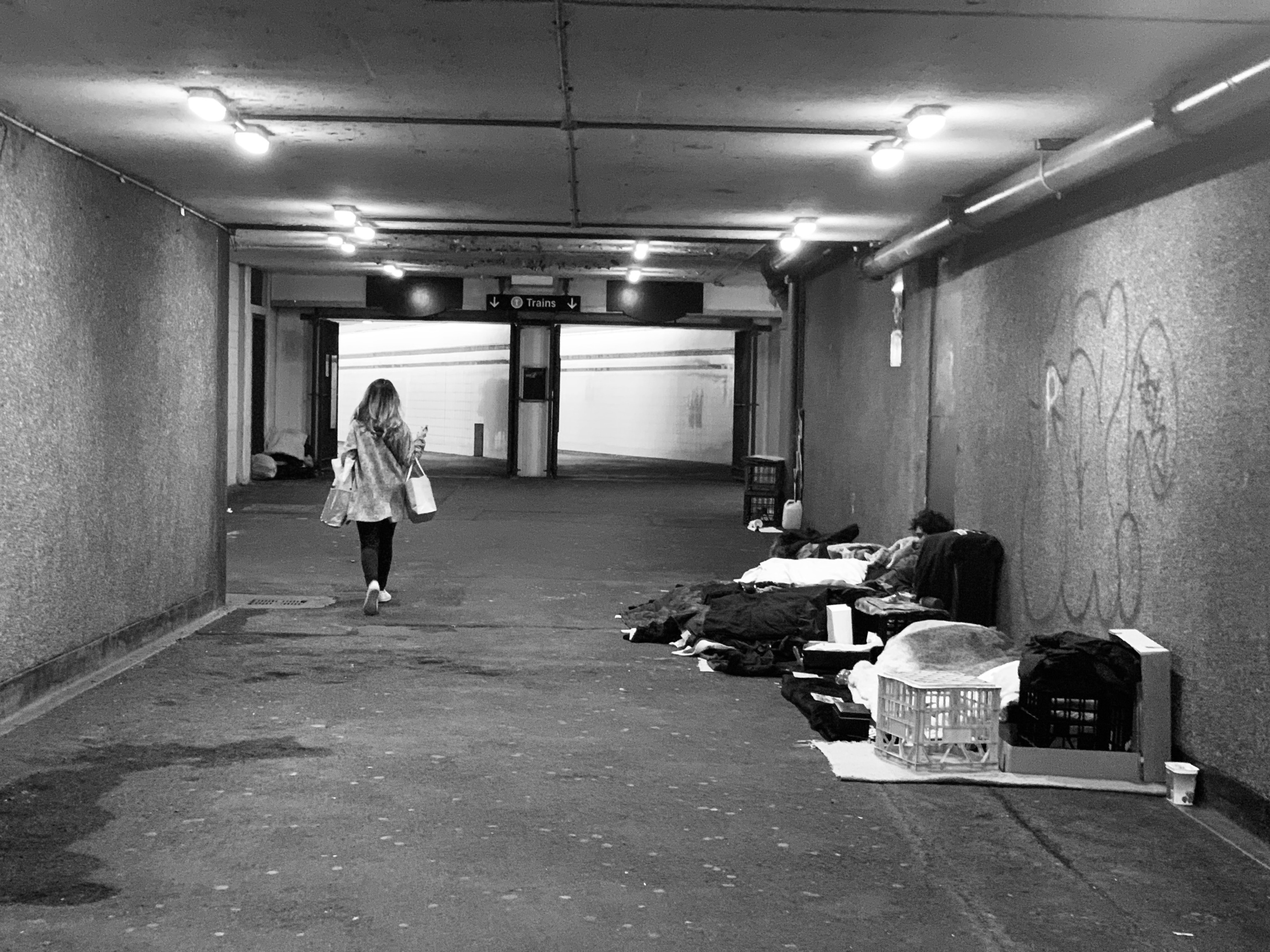 Introduction by Croakey: In the first year of the pandemic, there were hopes that a quick response and emergency accommodation programs would significantly reduce, if not end, the number of people who experience homelessness in Australia.

Some cities such as Adelaide, Sydney and Melbourne experienced significant reductions in homeless numbers. States that implemented emergency housing programs housed more than 40,000 people experiencing homelessness in the first six months of the pandemic.

Unfortunately, as Professors Hal Pawson and Cameron Parsell discuss below, “these remarkable gains were only temporary” and the number of people who are experiencing homelessness across Australia has since “risen sharply”.

In the article below, originally published in The Conversation under the title, ‘Homeless numbers have jumped since COVID housing efforts ended – and the problem is spreading beyond the big cities’, Pawson and Parsell cite housing affordability as the main cause for the increase in the number of people experiencing homelessness.

“Lengthy rough sleeping is typically a symptom of societal failure,” they write, calling on governments to overhaul Australia’s current housing system and develop a plan for “permanent supportive housing”.

The numbers of people who are homeless have risen sharply across Australia, with soaring housing costs emerging as the biggest driver of the increase.

The Australian Homelessness Monitor 2022, released on 5 December, reports that the average monthly number of people using homelessness services increased by eight percent in the four years to 2021-22. That’s double the population growth rate over that period.

Just as in other countries, the 2020 COVID-19 emergency accommodation programs achieved sudden reductions in rough sleeping in cities such as Sydney, Melbourne and Brisbane. But these remarkable gains were only temporary.

In the first major homelessness analysis spanning the COVID crisis years, we also show numbers have been rising in some parts of the country at rates far above the national trend. The problem has been growing especially rapidly in non-metropolitan areas. This trend is consistent with the boom in regional housing prices and, more especially, rents sparked by the pandemic. 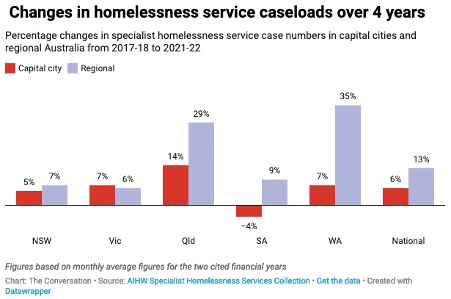 The homelessness that has long been a sad feature of our biggest cities has clearly spread to regional and rural Australia.

Many other patterns in the changing scale and nature of homelessness in Australia are ongoing trends that pre-date the 2020-21 public health emergency. This period appears to have had relatively little effect on these trajectories, which include a growing proportion of older adults, as well as First Nations peoples and those affected by mental ill-health.

As the chart below shows, unaffordable housing is playing an increasing role in people becoming homeless. 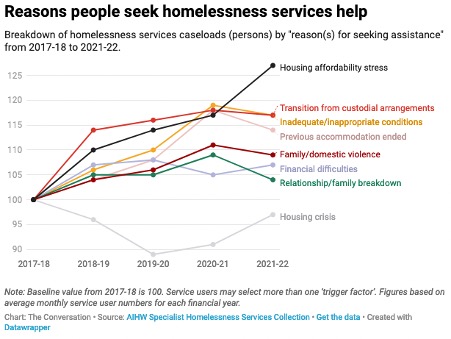 Several states had already announced a set of self-funded programs of a similar scale as part of their post-COVID economic recovery measures.

Together, these new programs will – at least temporarily – halt the long-term decline in social housing capacity. The sector’s share of the nation’s housing stock has been shrinking for most of the past 25 years.

By our reckoning, the government programs should deliver a net increase of about 9,000 social rental dwellings in 2024. This will be the first year for decades in which enough dwellings will be built to maintain the sector’s share of Australia’s occupied housing stock.

But sustaining this achievement will require more funding beyond the current commitments. Otherwise, the decline will resume.

Affordability is the big issue, but some need other help

As a recent Productivity Commission report acknowledged, homelessness is primarily a housing problem. In its words, “fundamentally, homelessness is a result of not being able to afford housing”. 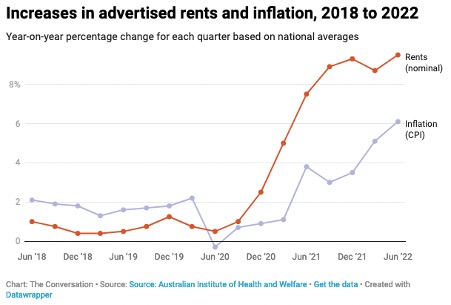 While other reasons do contribute to some people becoming homeless, most people experiencing homelessness have no long-term need for personal support. And many who do have high support needs can access and keep tenancies when suitable affordable housing is available.

At the same time, the most disadvantaged rough sleepers may require a great deal of help to overcome their problems. The widely acclaimed “housing first” model successfully does this.

As other recent research emphasises, for many chronic rough sleepers helped into secure housing, withdrawing such support – even after three years – markedly increases their risk of becoming homeless again.

Only a few such projects operate in Australia. There is no general framework to fund them, especially the support services.

Lengthy rough sleeping is typically a symptom of societal failure. All too often, for those affected, this failure starts from infancy.

Housing the chronically homeless pays for itself

The Productivity Commission report advocated a “high-needs-based [social] housing subsidy to ensure housing is affordable and tenancies can be sustained”. Logically, since this is essentially a social work (not social security) responsibility, it is the states and territories, and not the Commonwealth, that should bear the cost.

This may sound like a big ask for underfunded governments. But state and territory budgets stand to benefit from avoiding the costs that recurrent and chronic homelessness imposes on departments such as health and justice. As our previous research shows, we spend enormous amounts of public money responding to the consequences of leaving people in a state of chronic homelessness.

A model for funding permanent supportive housing needs to be developed. Ideally, this process should involve all Australian governments, perhaps as part of discussions to advance the National Housing and Homelessness Plan. Federal Labor pledged this project will take shape in 2023.

More broadly, these deliberations must be underpinned by recognition that our current ways of developing, operating and commodifying housing produce homelessness.

A plan to end homelessness requires a plan to overhaul our housing system so it produces enough suitable and affordable housing for all Australians.

Cameron Parsell is a Professor in the School of Social Science, The University of Queensland and receives funding from Launch Housing, as well as the Australian Research Council.

See Croakey’s extensive archive of articles on housing and health.

PrevPreviousFood, nutrition and climate: what was on the table at COP27?
NextMinum Barreng: The Story of the Indigenous Eye Health UnitNext