To improve children’s lives, Australia must act on alcohol marketing, pricing and availability

A clear message from this week’s Australasian Fetal Alcohol Spectrum Disorders (FASD) conference in Brisbane is the need for population-based strategies to tackle alcohol availability, marketing and pricing.

And perhaps the rest of Australia could learn from community-driven initiatives at Fitzroy Crossing, suggests journalist Mardi Chapman.

In the 20th century Australia’s economy was described as ‘riding on the sheep’s back’. Yesterday at the Australasian FASD conference, Australian society was more grimly described as floating in a sea of alcohol.

According to Sue Miers AM, chair of the National Organisation for Fetal Alcohol Spectrum Disorders (NOFASD Australia), alcohol was the elephant in the room.

For all the important work presented on understanding FASD, its prevention, diagnosis and management – the steps to making FASD history had to include a serious challenge to Australia’s infamous drinking culture.

The conference was told Australians consume about twice the amount of alcohol as comparable countries, on a per capita basis. That already alarming rate doubles again in some communities.

Conference participants also heard that young people, and women in particular, were increasingly engaging in risky behaviours such as binge drinking.

Alcohol contributes to illness, injury, violence and premature deaths, yet we remain strangely accepting of these harms.

The University of Sydney’s Professor Elizabeth Elliott AM said it was not reasonable to expect young women alone to change their drinking behaviour.

“Efforts to encourage women not to drink during pregnancy in order to avoid fetal alcohol exposure should be underpinned by strong action from government to reduce all alcohol related harms.”

There is strong evidence that population-based strategies such as alcohol pricing and taxation policy or restrictions on the density of liquor outlets and licensed premises’ opening hours are effective in reducing alcohol related harms.

Marketing and promotion of alcohol, especially through advertising and sponsorship in sport – that other great Aussie tradition – also came in for a serve during the conference. 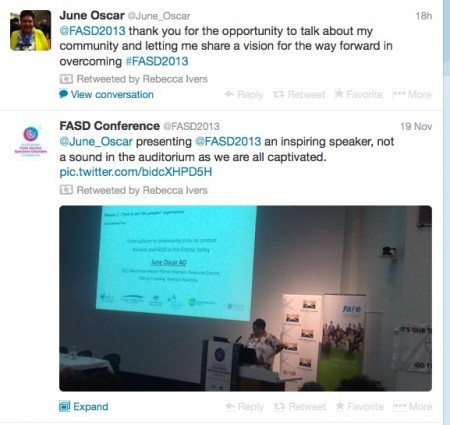 The extent of the crisis in her community, where FASD is so often ‘seen in the faces and behaviours of the children we love’ prompted locally driven alcohol restrictions, which have now been in place for six years.

It didn’t come easily and they initially faced  ‘fierce resistance from those addicted to a destructive lifestyle’.

Without change, she said, the possibilities for the future of the children and the community would have been severally and cruelly limited.

About 80 km down the road from the FASD conference, thousands of school leavers are currently indulging in the modern tradition, and excesses, of Schoolies Week on the Gold Coast.

Most are under age, some of the images are unpleasant, and there will be alcohol related harm.

It seems that the rest of Australia could learn something from an Indigenous community prepared to ‘transform the environment we were trapped in’.

Some of the tweet-reports from yesterday’s discussions 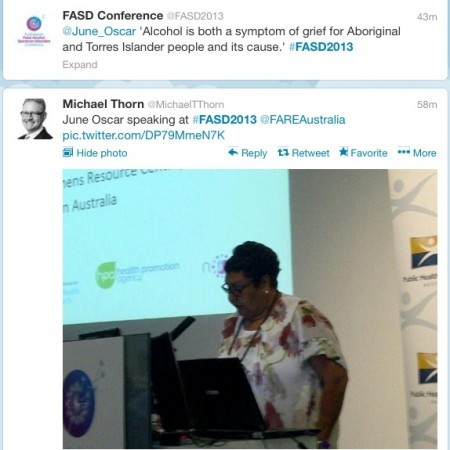 PrevPreviousHow do we build a health system that is not racist? (Start by taking this online test…)
NextCan a new breed of “coaches” help transform mental health care?Next