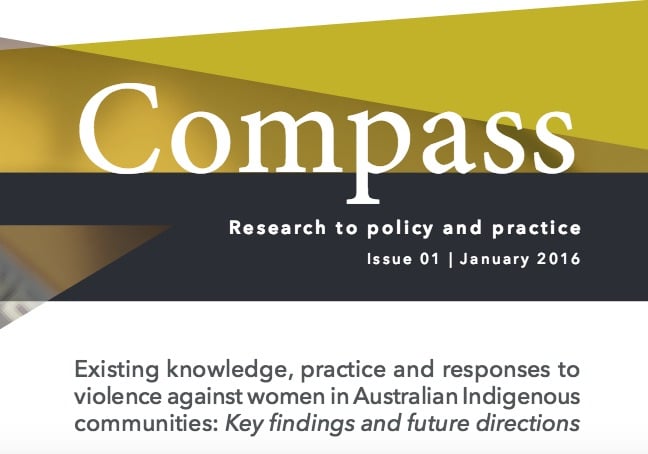 Efforts to address family violence affecting Indigenous women should be holistic, focus on intergenerational trauma and family relationships, and involve cultural-based leadership and governance, according to a wide-ranging review.

Services and programs also should be funded for adequate community input, evidence-based evaluation and longer-term operational costs, the review recommends.

Violence against women in Indigenous communities has been highlighted by politicians and the media as an issue of national importance, but less is known about Indigenous experiences and viewpoints on the issue.

We conducted a comprehensive review of published literature for Australia’s National Research Organisation for Women’s Safety (ANROWS) to present the current state of knowledge, practice and responses to violence against women in Australian Indigenous communities.

We found that Indigenous Australians see violence as a family and community issue. In general the term “family violence”, rather than domestic violence, is preferred to reflect an understanding of violence being the result of a range of community and family factors, rather than one individual’s problematic behaviour.

The literature reveals a wide array of theories about causes of violence against women but no evidence for one causal factor.

Instead, academics, advocates and community members describe a number of inter-related factors that contribute to the issue – including intergenerational trauma and the breakdown of traditional culture and kinship practices. These highlight the complex and cumulative nature of violence and victimisation.

While the evidence does suggest a higher rate of violence against Indigenous women, many authors stress that violence is not normal or customary in Indigenous communities. Instead, violence should be approached as the result of, and perpetuated by, a range of historical and contemporary social factors.

The big picture finding from this review is that the cumulative nature of socio-economic disadvantage (such as personal, family and economic related stressors) and the lasting effects of colonisation are thought to be linked to violence against women in Indigenous communities.

Much of the grey literature contained information about Indigenous viewpoints on “what works” to prevent violence against women.

Approaches to dealing effectively with violence, and solutions that are valued by Indigenous communities include cultural based leadership and governance, and programs focused on preventing the transfer of intergenerational trauma.

Because Indigenous family violence is, in part, attributed to the breakdown of culture and kinship practice, the rebuilding of these family relationships is often seen as central to developing any type of response.

Solutions developed by Indigenous people and communities are likely to focus on healing the community, restoring family cohesion, and developing processes where the victim and perpetrator can deal with their pain and suffering.

Generalised family violence services can be considered effective if they are operated in a culturally sensitive way and/or run in partnership with Indigenous organisations.

For example, family violence research suggests that Indigenous women’s experiences of the justice system are often filled with misunderstanding, fear and racism.

The criminal justice system is not necessarily considered the most appropriate means for dealing with family violence. Indigenous experiences of family violence and the justice system suggest that people are interested in programs that focus on preventing the transfer of violence, not just prosecuting of punishing people for being violence.

Instead, co-designed justice initiatives, which include Indigenous leadership and values can be more appropriate.

There is currently a patchwork of responses to family violence in Indigenous communities provided by federal, state and territory governments as well as local initiatives.

There is positive progress being made in Indigenous communities; however, quality evidence and wider information sharing is needed.

The report reviews 24 programs for which there was available evidence. However, many more programs are not widely known about as they are not evaluated and do not receive sustained funding support. More data is needed on the effectiveness of these programs, as well as broader policies.

The findings of this report suggest that there are some approaches to dealing with violence against women that may be more appropriate and successful in Indigenous communities.

PrevPreviousPublic hospitals matter. But so do public health, primary healthcare, and the wider determinants of health…
NextWhy society is making people with disabilities sickNext