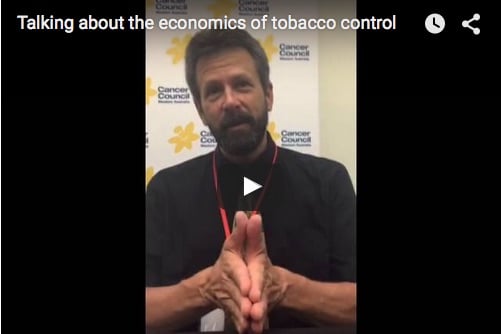 Tobacco control is smart economics (amongst other things)

After delivering multiple presentations at this week’s Oceania Tobacco Control Conference and elsewhere in Perth, US economist Professor Frank Chaloupka heads next to Geneva to work on Australia’s ongoing defence of its tobacco plain packaging laws.

Three years after introducing the laws, Australia is fighting to protect them on two front: complex legal proceedings in the World Trade Organization (WTO) and under a 1993 bilateral investment treaty between Australia and Hong Kong.

Chaloupka is instrumental in the Tobacconomics initiative based at the University of Illinois Chicago Health Policy Center, which generates and gathers growing evidence of the economic benefits of tobacco control versus the costs of continued smoking at an individual and global level. (Watch a video interview with him at the bottom of this article).

He told the conference that tobacco companies have shifted the focus of their argument away from health (having lost that convincingly) to an economic one, including seeking to be seen as champions of the poor.

He intends that they will lose that one too, saying governments should not be persuaded that tobacco controls will impose economic costs such as unemployment for tobacco farmers, lost revenue for bars and restaurants, or rising illicit trade.

These are “myths” that have slowed tobacco control in developed nations, including currently in some Australian states on smoke-free dining. But they are particularly an issue for developing nations that fear they can’t afford to pursue tobacco control.

Chaloupka argues that countries can’t afford not to take action, with tobacco driving excessive spending on healthcare, lost productivity of people getting sick and dying younger, and with its contribution to poverty. 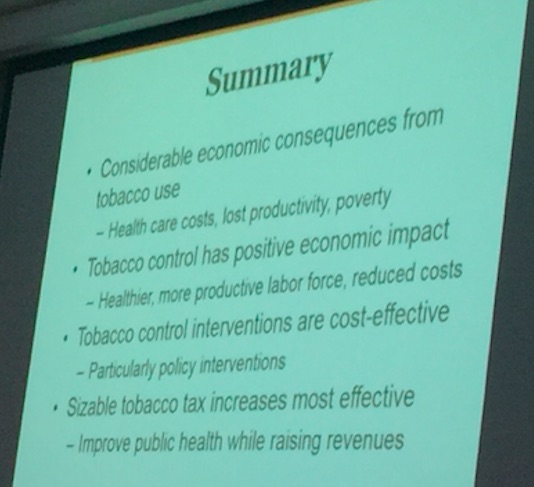 Chaloupka says the industry insists that it contributes significantly to economics, and a lot of jobs are dependent on tobacco.

But he says that when tobacco use goes down, ex-smokers shift their money to other goods and services to produce a net jobs gain. That often applies also, he said, to jobs in the hospitality sector, with smoke free areas encouraging non-smokers to go out more and spend more: “so bars and restaurants do better”.

Turkey had shown how to help tobacco farmers move into other production areas, with support from revenues from tobacco taxes. 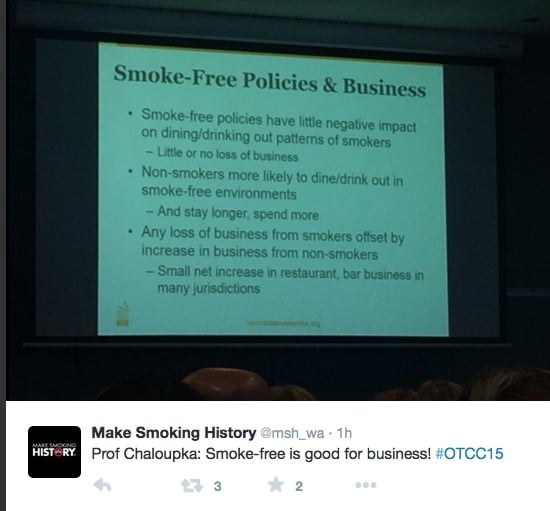 Impact of tax/excises on poor people

Chaloupka quoted a tobacco executive as saying “no other tax hurts the poor more than the cigarette tax”. He told the conference rising tobacco prices clearly have a disproportionate and often crippling effect on low-income people who find it too hard, often for complex personal and structural reasons, to quit smoking  even when it’s unaffordable.

But he said it was disingenuous of the tobacco industry to act as if it was opposing tobacco taxes out of concern for the poor when tobacco was “key determinate of poverty”. Research shows that tobacco “crowds out” spending in low income households on essential items like food, education and healthcare. He showed this slide: 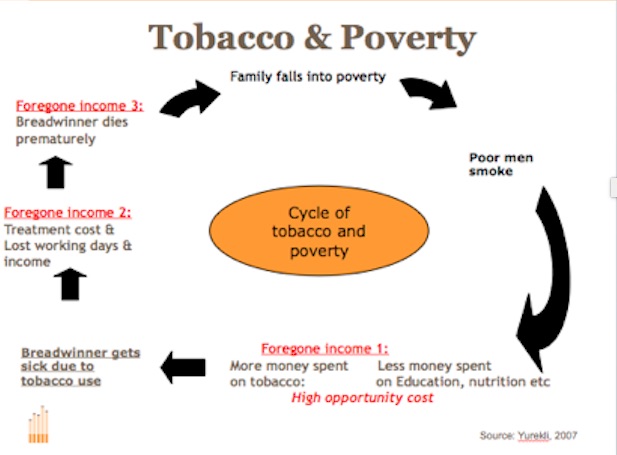 The industry’s argument also overlooked the significant health and financial benefits for many low-income households in giving up smoking, not to mention health gains.

Chaloupka said low income smokers were very responsive to price: that is many give up when the price rises. They also bear a disproportionately heavy tobacco death and disease burden, with Tobacconomics research finding about half of health inequality in most countries could be explained by tobacco use. “So we end up with a progressive effect,” he said.

But he said it is incumbent on governments to ameliorate the impact on people on low incomes who continue to smoke by dedicating revenue raised from tobacco taxes to help them give up and to address the social determinants related to high smoking levels.

He said the Philippines had directed the revenue from new major tax imposts on tobacco to finance a universal healthcare program that provided health care benefits to low-income populations.

In the US, the last major tobacco tax increased was directed to support the expansion of health insurance for low-income children. 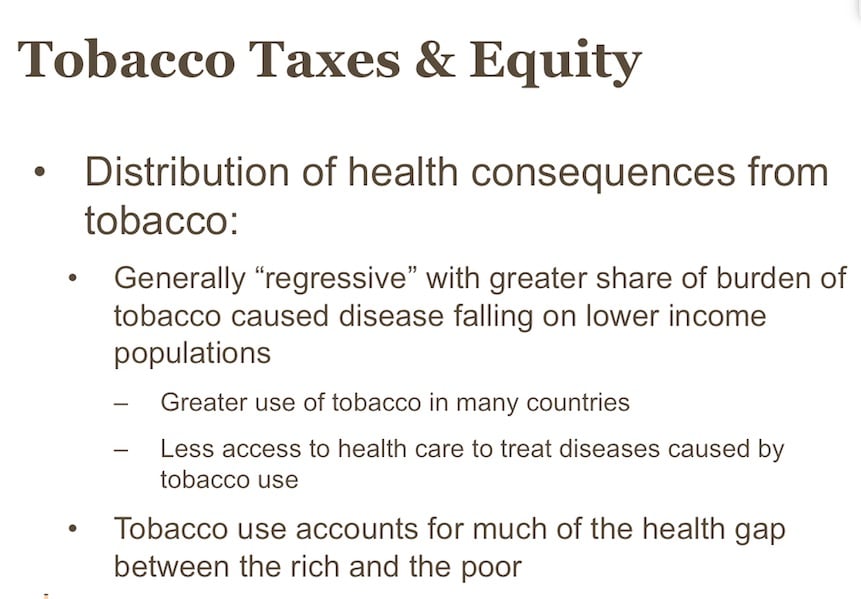 He said there’s a need to consider fairness of the overall fiscal system:

The tobacco industry has issued many dire warnings in Australia that plain packaging will lead to greater illicit trade (and a loss of official tax revenue).

However, Chapoutka says the more important factors are the strength of a country’s governance, how effectively its borders are controlled and the strength of its tax administration.

For example, 25 years ago Spain had had some of Europe’s lowest prices and taxes but some of the biggest problems with smuggling.

A crackdown has seen the illicit trade “almost eliminated at the same time they raised taxes and prices,” he said. There had been similar experiences in Canada, Brazil and the UK.

Australia will next year get its last of four 12.5 per cent tax increases introduced in 2013 by the Rudd Government and described by public health advocates as “a gold star public health policy”. The evidence shows that consumption of tobacco drops by about 4 per cent for every 10 per cent in price, and double that in an already high price environment.

Chapoutka said he is constantly asked whether excises will eventually stop having an effect. “One thing we know is that price increases work,” he said (see the slide on New Zealand below). 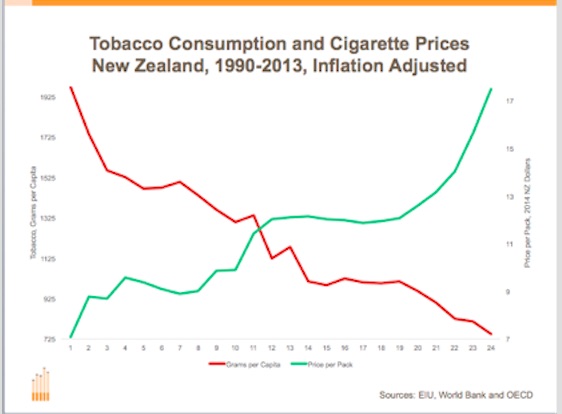 However, he said the way they are phased in also has an impact, with bigger increases that happen less frequently having a bigger impact.

Countries like Australia should consider big shock one-off excise increases (of up to 50 per cent), rather than regular incremental rises, which both the tobacco industry and many smokers try to absorb, he said.

He showed a slide showing the breakdown in promotional spending for the tobacco industry, with a huge part going towards discounting. In US, he said, every $5 of every $6 spent on tobacco marketing is to reduce the price.

“(A big one-off increase) is harder for the industry to swallow, more shock for smokers, and all the extra debate also tends to have a big impact on prevalence.”

Chapoutka said tobacco companies now provide every type of tobacco product, including their own smoking cessation products, “which they market as ways to get around controls” and e-cigarettes as “a way to maintain your addiction” or “smoke’ in smoke-free places.

Tobacco companies are also using their market power to challenge tobacco control, as they have been doing unrelentingly with Australia’s plain packaging laws.

Three years after introducing the laws, Australia continues to face complex legal proceedings in the World Trade Organization (WTO) and under a 1993 bilateral investment treaty between Australia and Hong Kong.

That’s a major issue for low and middle-income countries, where smoking rates are in some cases still on the rise. He said many hear and accept tobacco industry arguments about “all the bad things that are going to happen” if they do.

“Australia has the resources to fight those sorts of fights, but many low income countries don’t.”

Much of its work, and many tobacco control initiatives in the Oceania region, will likely depend on what is determined in Geneva.

• Watch the interview below: