In the post below, he calls for justice and mental health to be added as Closing the Gap targets and says governments need to be just as accountable for their policies and programs as they demand of the Aboriginal and Torres Strait Islander communities and organisations that they fund.

Professor Calma’s article is based on a Twitter Periscope interview he did with #JustJustice team member Summer May Finlay that attracted nearly 350 live viewers. See the Twitter record of the discussion at the end of the post.

Croakey is in urgent need of support for the #JustJustice crowdfunding campaign, which has less than two weeks to go to meet the target so we can produce a comprehensive and sustained series of articles identifying solutions to the over-incarceration of Aboriginal and Torres Strait Islander peoples. More info is here http://www.pozible.com/project/194726 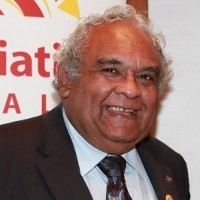 There are two immediate priority responses for reducing the shocking over-incarceration rate of Aboriginal and Torres Strait Islander people.

First, the time has come for a roll out of Justice Reinvestment initiatives across Australia that work with people before they offend, and provide support when they are released from prison so they don’t reoffend and return to prison.

Justice reinvestment is about shifting spending away from prisons and juvenile detention expansion towards prevention, such as early childhood education in vulnerable communities, targeting young people at risk of school disengagement, intensive case work support with housing and employment support, and job creation.

The Justice Reinvestment model is not ‘one size fits all’. It will look different in every community; for example, the current trials in New South Wales –  one in Bourke, the other in Cowra – are being implemented by different organisations and differ in their design and focus .

I reported on the need for and benefits of the Justice Reinvestment approach in 2009, when I was Social Justice Commissioner and it was a relatively new public policy response to the out-of-control expansion of the prison population in the United States. It is now being implemented across 19 states in the US, in Canada and the UK, where evidence shows the prison rates are being reduced.

Since 2009 we have had a Senate inquiry that confirmed the potential value of a Justice Reinvestment approach to criminal justice in Australia, and seen the launch of Just Reinvest NSW. We have much support from the judiciary and from communities, but still the ideas gather dust while politicians continue to espouse a tough on crime approach.

If politicians are not moved by the social, community and personal costs of over-incarceration, then surely they are by the economics. In New South Wales, it costs more than $650 per person per day or $230,000 per year to keep a young person incarcerated. We argue that it’s better to invest that $230,000 in the community, into services that help before someone commits a crime, rather than adding new prison beds or building new prisons.

The second priority is to improve the research base around why Aboriginal and Torres Strait Islander people are being incarcerated at such high rates in Australia for offences that are at the lower end of the scale – such as for non-payment of fines, breaches of community service orders, or disorderly behaviour.

That’s particularly important for the groups we now identify as pressure points:  young people and women whose incarceration rates are rising. We need to look hard at why that is.

I come from Darwin, from the Kungarakan people on my mother’s side, and the Iwaidja on my father’s.  We were very fortunate to have been able to get our own land back, after many years of struggle, under the Northern Territory’s Aboriginal Land Rights Act 1976. As Aboriginal and Torres Strait Islander people, it’s very important that we can maintain our relationship with our land and our culture. Yet many cannot.

This is a real issue we have to consider in relation to Indigenous over-incarceration. It’s not an excuse, but we need to acknowledge that people can commit offences because of past traumas and dissociation from land and culture – whether they were forcibly removed in past days or controlled in the way they can connect. Racism also has a big influence on the way people behave, particularly in terms of  discrimination in employment. If people can’t get meaningful work, they are left to their own devices and sometimes will turn to crime.

We know the benefits that come from a strong relationship with land and culture, from when we feel respected and safe and secure in our own identity. A very important longitudinal study of the Utopia community demonstrates how living off the land, being secure in culture, language and law practices, has produced better mental and physical health outcomes than those experienced in regional or metropolitan areas.

These are factors we have to consider in the context of the Western Australian Government’s plans to close remote Aboriginal communities; how losing connection contributes to crime and over-incarceration.

We need to continue to pressure the Federal Government to include both justice and mental health targets in the Closing the Gap framework. Once a target is set, it makes governments accountable and they have to report against those targets – that’s why they shy away from them.

Governments expect us to be accountable for the money they hand out. We also expect them to be accountable, for the funding they approve and the policy directions they select.  They need to recognise that they too are major contributors to the success or failures of our programs.

How we work with Aboriginal and Torres Strait Islander people in prison is vital to their future. There are very high levels of mental health problems for all prisoners, but the Indigenous burden is higher. We also know that people who are incarcerated, particularly over the longer-term, have a shorter life span on release. They don’t get the treatment in prison and the support is not there on release.

One of the most positive shifts in prison health has been the move towards smoke-free prisons across Australia, with Northern Territory prisons now in their second year of smoking bans. There have been a few issues with implementation, however it’s a great opportunity for our people to get healthier and stay healthier, given that smoking contributes to about 20 per cent of the burden of death for Aboriginal and Torres Strait Islander people and is a major contributor to a number of chronic diseases.

There are initiatives out there that are making a difference but we need to get the message across to a broader audience. We should promote to politicians what needs to happen at every opportunity, as well as talk to business and any other organisation or group we believe are tied to our future.

We need to keep them informed about the challenging issues we are faced with, but also talk to them about the solutions we have identified that we wish to see supported and, where we can, show them the successes.

We know most failings in Indigenous affairs are not because of Aboriginal and Torres Strait Islander people but because governments and politicians are not consistent in their approach to implementing programs and applying funding. The approach is always short-term when we need to identify a very clear long-term plan, seek bipartisan support and engage with people. That’s why the Close the Gap Campaign strategy is so important: we talk about a 25 year plan.

Like the National Justice Coalition’s Change the Record campaign, #JustJustice aims to raise awareness about over-incarceration.

It is a very important campaign that aims to provide a platform to a range of people: those who are affected by incarceration or have been working for years at trying to keep people out of prison, those trying to keep them healthy in prison, or stop them from returning to prison after release.  A platform that works with Aboriginal and Torres Strait Islander peoples to empower and educate to curb the scourge of incarceration and reduce the number of victims.  It’s a chance to give these people a voice, to get them to share their experiences, their knowledge and their solutions. Please support #JustJustice. 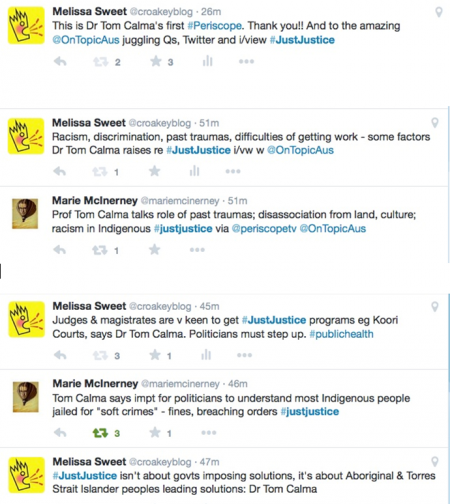 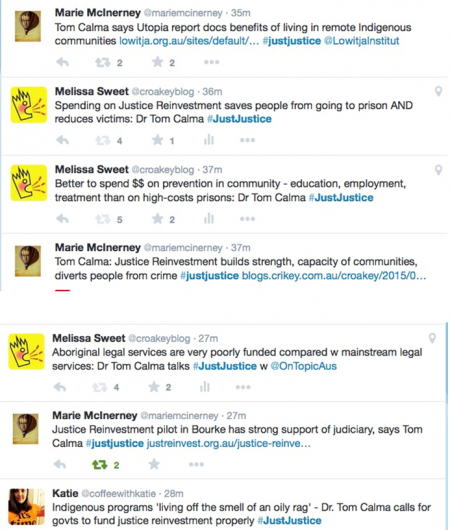 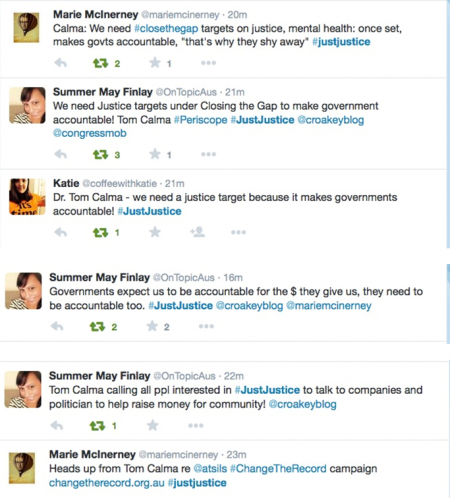