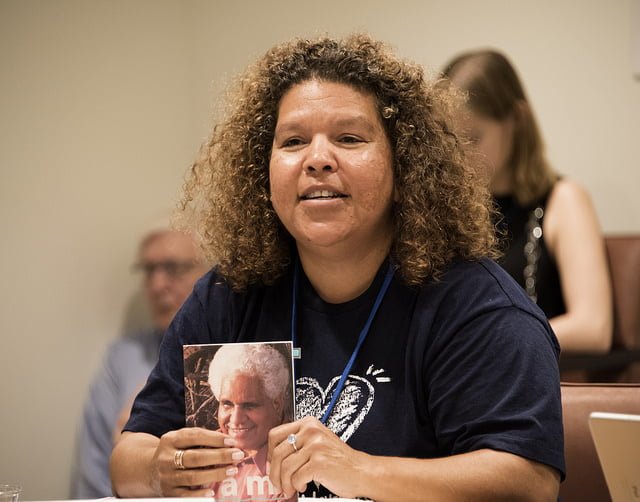 Tribute to Yami Lester: reluctant public figure who lost his sight but never his vision

**WARNING: Aboriginal and Torres Strait Islander readers are warned that this article contains the name and image of a deceased person **

Earlier this month more than 500 people, including South Australian Premier Jay Weatherill, paid their final respects to Yami Lester OAM at a state funeral at Walatina on the Anangu Pitjantjatjara Yankunytjatjara lands in the state’s far north.

As anti-nuclear campaigner Dave Sweeney said in a eulogy at the funeral, the much loved and admired Yankunytjatjara Elder, activist and leader became a reluctant public figure after being blinded by the British nuclear tests in the 1950s, when he was just a child.

Yami Lester died just weeks after his daughter Karina addressed the United Nations in New York, which in July adopted a nuclear weapons ban treaty (without Australia’s support). It recognises, for the first time in such an instrument, that Indigenous people have borne the brunt of the nuclear industry, from uranium mining through to testing.

Croakey thanks Sweeney, who is nuclear free campaigner at the Australian Conservation Foundation, for permission to publish his eulogy in full below. Yami Lester’s family has also given public approval to publish his name and image.

I would like to acknowledge and pay my respects to the Lester family, to the people of this place and to the Traditional Owners of the full sweep of the APY lands.

Yami Lester had a big family and a wide circle of people that knew and loved him.

But it is not that Yami – father, grandfather, countryman – that I speak of today.

Today I speak of Yami Lester, the reluctant public figure.

Reluctant because he didn’t look for attention and because his fame came at the cost of his sight and the health of his country.

Public because Yami’s story is a fundamental part of the wider Australian story.

When Yami was a young boy an old Empire used his ancient lands as a place to test their newest weapon.

These two worlds collided and a boy lost his sight.

But never his vision.

As we gather to farewell Yami and to put him into the embrace of his land we are book-ended by the anniversaries of the events that so shaped his life.

On August 6 in another year, Hiroshima was devastated.

On August 9 in another year, so was Nagasaki.

And the Imperial desire to catch up with the new power was why Yami’s lands were contaminated and his sight curtailed.

Yami’s story is now part of our national story – I hear, I talk, I touch but I am blind…..

It is my privilege, my honour and my sad duty today on behalf of the Australian nuclear free and environmental community – some who are here and with many others pausing across the country and around the world – to witness and mark the passing of a proud Anangu man whose story has shaped that of our so beautiful and often so flawed nation.

But today’s event and Yami’s life is not just about a passive past.

It is about an active future. Yami lost his sight. He never lost his vision.

Nor did his family.

An end to plans for South Australia to accept high level international nuclear waste – and a recent United Nations treaty to de-legitimise and end nuclear weapons.

But all of it is real. Potent. Powerful. Proper.

When Yami’s land was bombed he was not counted as a citizen.

Today when we lay Yami in the warm earth of his country his daughter has spoken to the United Nations in New York about the need for a nuclear weapons ban.

And been listened to. And had a ban treaty adopted.

I know how important and positive it was for Yami to see these moves in his final days.

Obviously, clearly, this does not mean either threat is finally over.

But it does mean they are contested and greatly reduced.

In a world without nuclear threats and risks Yami Lester would have been a great stockman.

In a world with nuclear threats and risks he cracked his whip loud, hard, sharp and constant to sound a different alarm.

We owe him a great debt.

He faced adversity with under-stated courage, humility and strength.

And he made a real and lasting difference.

And so with the thanks and the hopes of so many we say Farewell.

May nuclear weapons Rust in Pieces.

And may Yami Lester Rest in Peace.

Declaration: Marie McInerney worked with the International Campaign to Abolish Nuclear Weapons (ICAN) Australian office during the negotiations at the UN which adopted a nuclear weapons ban treaty in July.