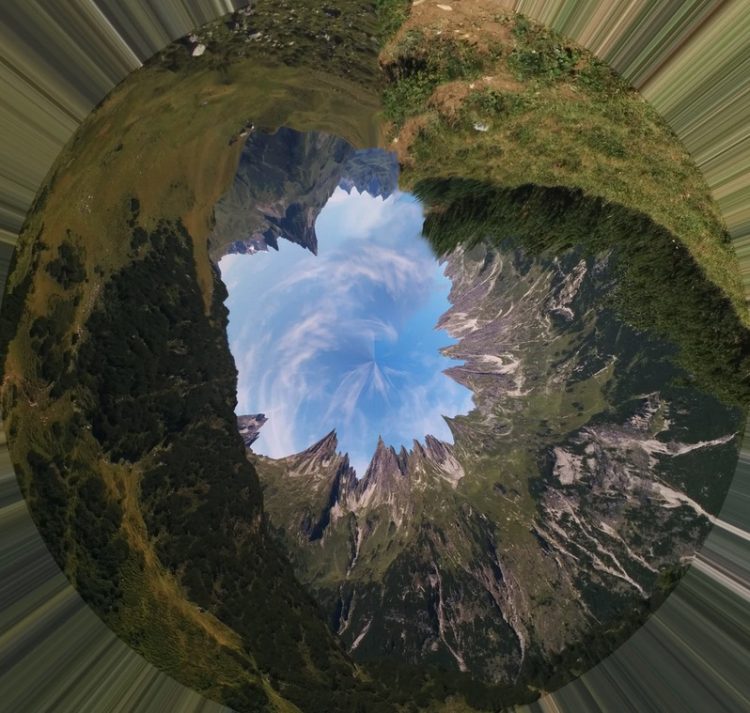 Global health under attack. Photo by Kai Dahms on Unsplash

Health leaders around the world have slammed President Donald Trump’s plans to withdraw the United States from the World Health Organization, warning the “unconscionable” move will impede global efforts to fight the COVID-19 pandemic and other health threats.

The American Public Health Association called the plan “irresponsible, illogical and dangerous”,  the American Medical Association urged Trump to reverse the decision, and the American Academy of Pediatrics warned of “grave risks for the world’s children during an unprecedented global health crisis”, including a potential surge in polio cases and children’s deaths from malaria.

The Peoples Health Movement described Trump’s plan as “shameful”, while the Global Health Council said it condemned the withdrawal of support from “an organization which provides life-saving aid to so many”, and said the US had led the creation of the WHO for a reason. “We cannot lose sight of that now.”

In commentary on Twitter, Lawrence Gostin, Professor of Global Health Law at Georgetown University, described the move as shameless, reckless, dangerous, irresponsible, foolish, arrogant, and unlawful, saying that Trump had no power to withdraw unilaterally without Congress consent.

In his 30 years of working with the WHO, Gostin said he had never seen it under such vicious attack, and described Trump’s action as “an enormous disruption and distraction during an unprecedented health crisis”.

“It will cost many lives, globally and in the US. The President has made us less safe,” he said.

Meanwhile, experts writing in the BMJ said Trump’s “anaemic response” to the pandemic had led to the US becoming its epicentre, with almost one-third of the world’s cases and a still rising number of new daily cases; as other authors wrote in The Conversation:

Not since Franklin Roosevelt in the second world war has a US president presided over the deaths of so many Americans from a single cause.”

Writing in the BMJ, Gavin Yamey, professor of global health and public policy at Duke University, and Gregg Gonsalves, assistant professor of epidemiology at the Yale School of Public Health, said Trump’s “astounding incompetence was a political determinant of the US COVID-19 epidemic”.

In our interconnected world, the uncontrolled US epidemic has become an obstacle to tackling the global pandemic.

Yet the US crisis was an avertable catastrophe.”

They highlighted Trump’s anti-scientific pronouncements during COVID-19 and his “arguably most dangerous act” in calling for mass public protests by his supporters to “liberate” states from their stay-at-home orders, targeting states with Democratic governors, while reminding US citizens of their right to be arms.

Yamey and Gonsalves said that Trump has sought to deflect blame on Obama, Democrats, China, and, most recently, WHO, halting funding to the organisation even though he had praised it in February for “working hard and very smart.”

They said the US is likely to experience years of mass unemployment, multiple cycles of stay-at-home orders, a rise in reported and unreported mental health conditions, other excess deaths otherwise avoided outside of a crisis, and other social dislocations in response to epidemic resurgence.

To get through this, the US will need unprecedented social mobilisation that pushes local, state, and federal leaders to provide universal health coverage, universal sick pay, and rent and food assistance, focusing particularly on people who are poor, homeless, marginalised and those in jail or juvenile and immigration centres, they said. 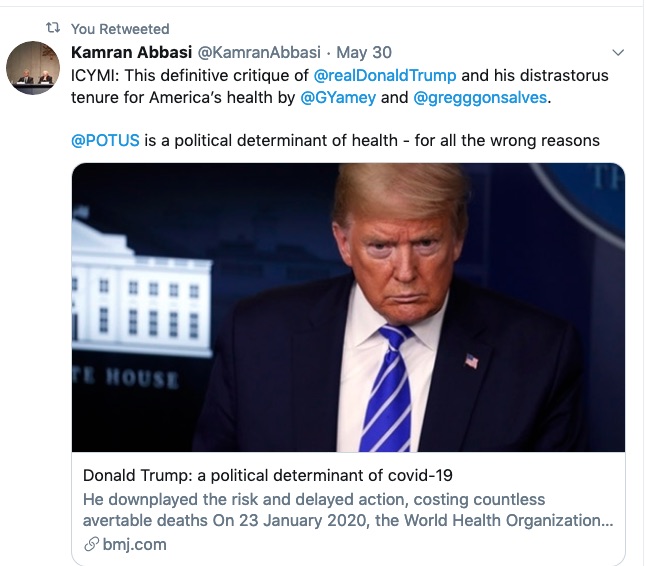 With other experts also noting that Trump may not have the powers to execute his threat to withdraw US membership of the WHO, Stat News has raised questions about the implications for the many US staff at the WHO.

These include Dr Maria Van Kerkhove, the WHO’s leading expert on coronaviruses, who accompanies Director General Tedros Adhamon Gheybreyesus during the agency’s COVID-19 press conferences, and other staff on secondment from the Centers for Disease Control and Prevention or other agencies.

Trump’s announcement came on the day that WHO and Costa Rica announced the COVID-19 Technology Access Pool, an initiative supported by 30 countries and multiple international partners and institutions with the aim of making vaccines, tests, treatments and other health technologies to fight COVID-19 accessible to all.

The widespread concerns about Trump’s announcement raise questions for the Australian Government: will it seek to support the WHO at this critical time, or follow the lead of Trump in undermining an agency so widely seen as critical for global health? Its recent actions and statements in this regard do not inspire confidence.

The question could also be put another way: will the Australian Government challenge the United States on how its own failure to manage the pandemic is threatening global health?

Richard Horton, Editor in Chief of The Lancet 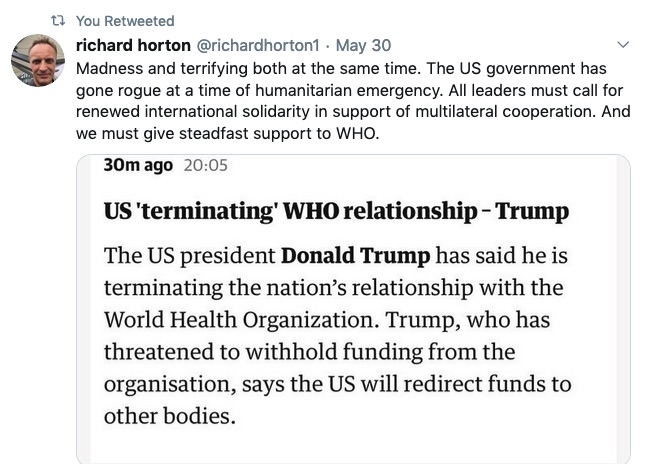 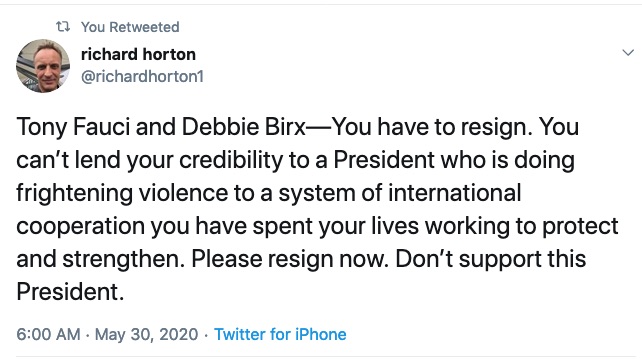 Read the article below by Chelsea Clinton and colleagues, who conclude:

In the end, it is not the WHO leadership who will become the victim of Trump’s animus toward the agency.

The real victims will be the children, parents, and grandparents in countless communities vulnerable to new and recurring communicable diseases—including COVID-19 itself, as the pandemic accelerates around the world. The WHO is essential to convene scientific experts and catalyze the world’s best thinking on COVID-19.” 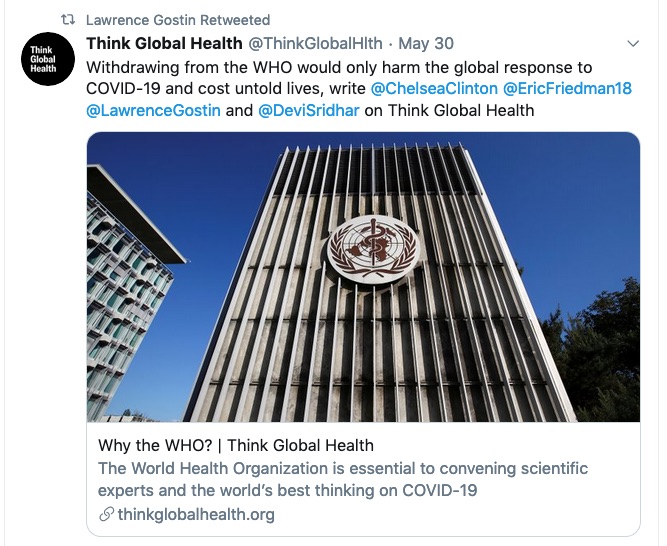 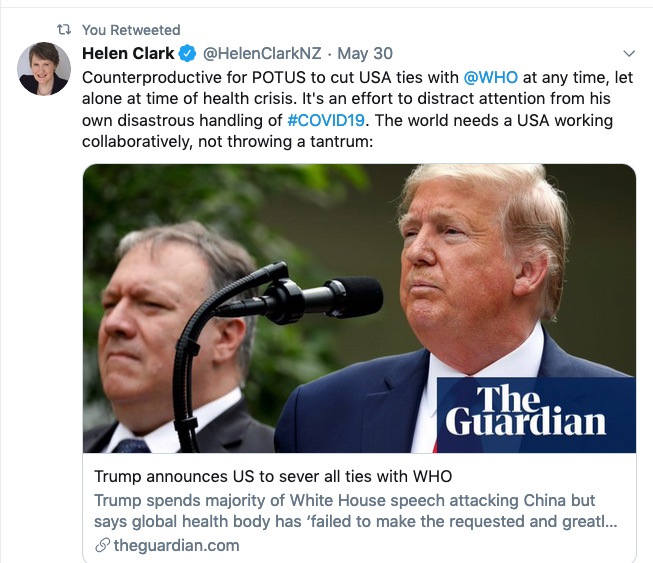 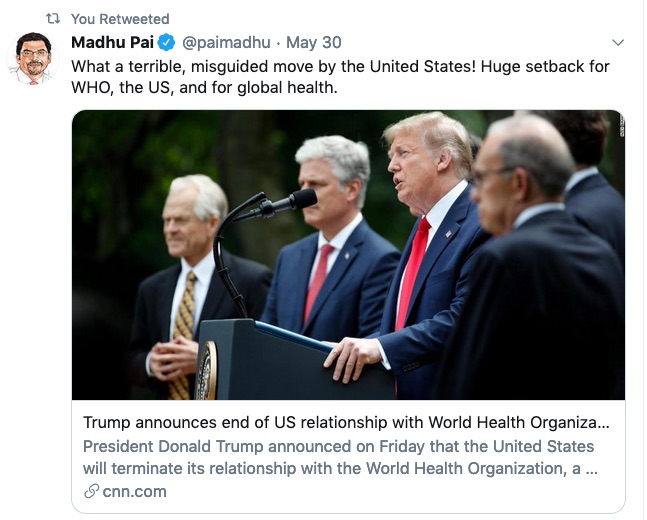 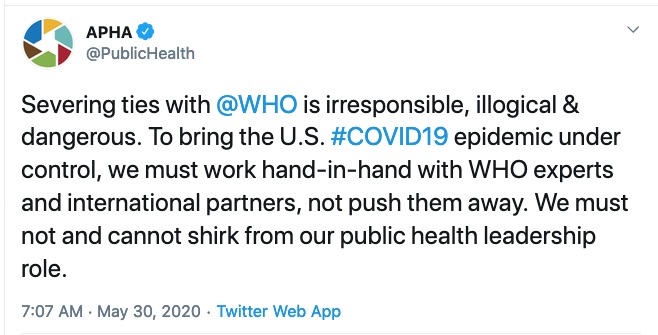 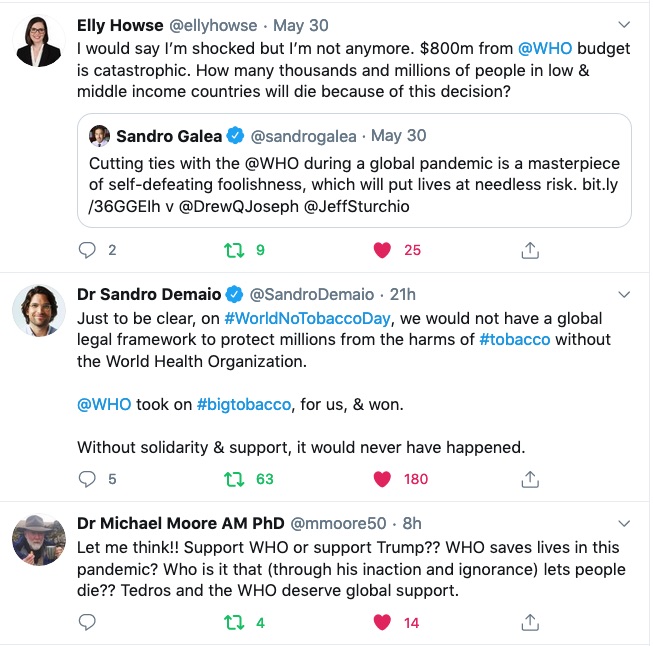 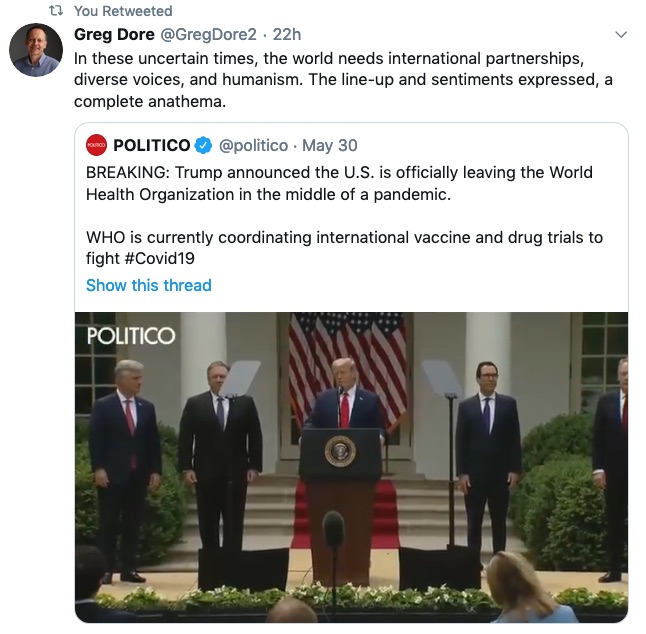 Her tweet below refers to this article in The Lancet, that says:

WHO governance provides a path for shared responsibility to realise global solidarity.

With WHO holding a vital role in coordinating the international response, states must not take deliberately divisive actions that seek to undermine global health governance.

State support for WHO remains essential through contributions to the WHO budget and adherence to WHO guidelines.” 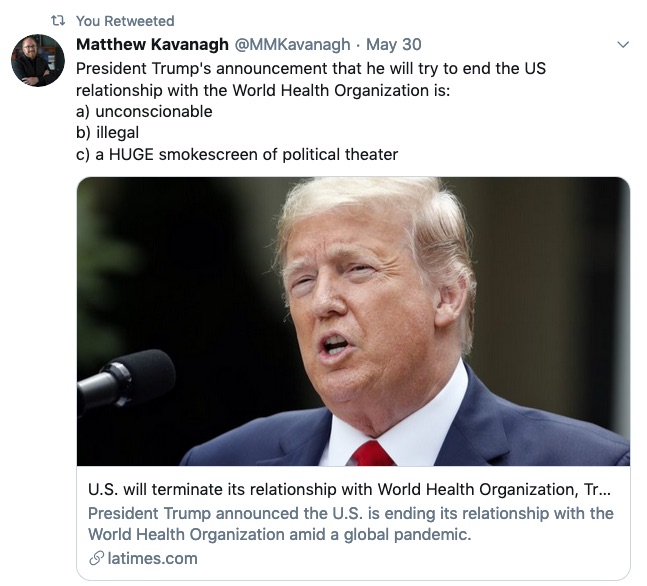 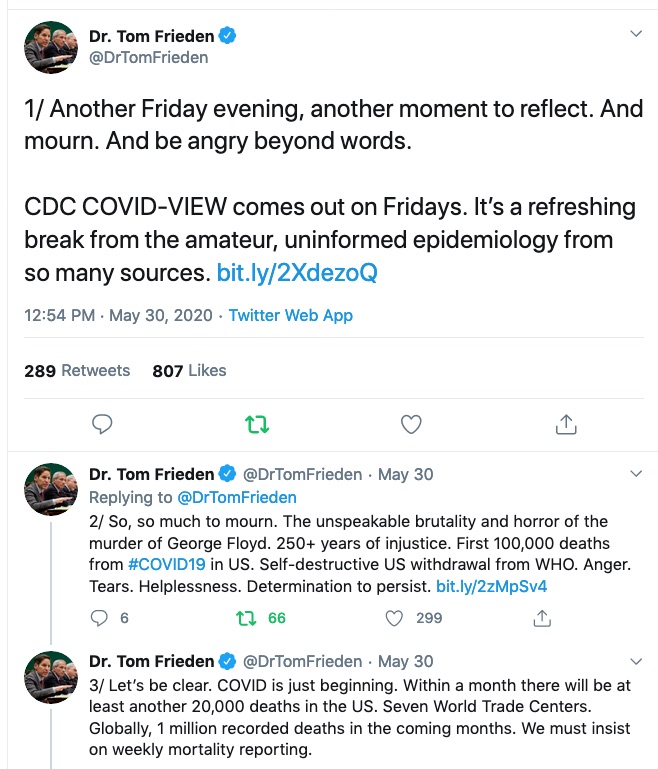 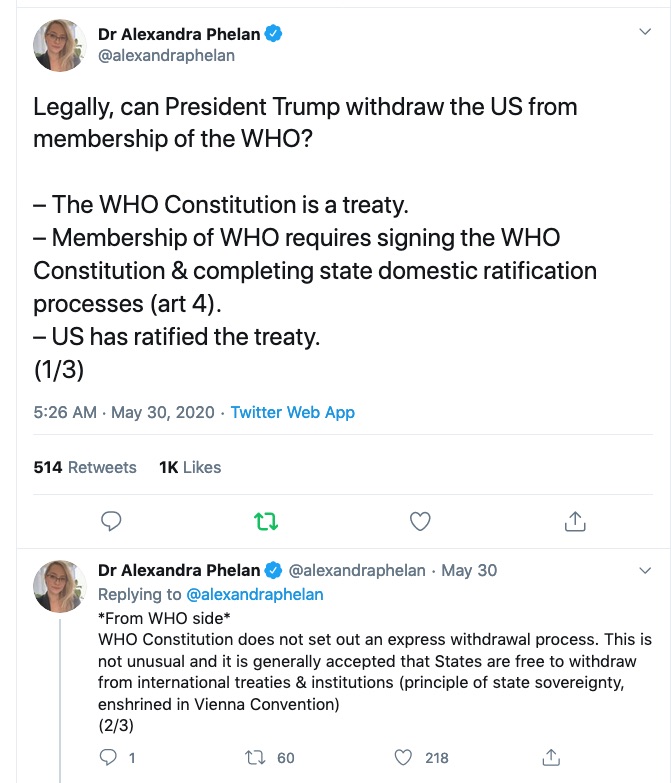 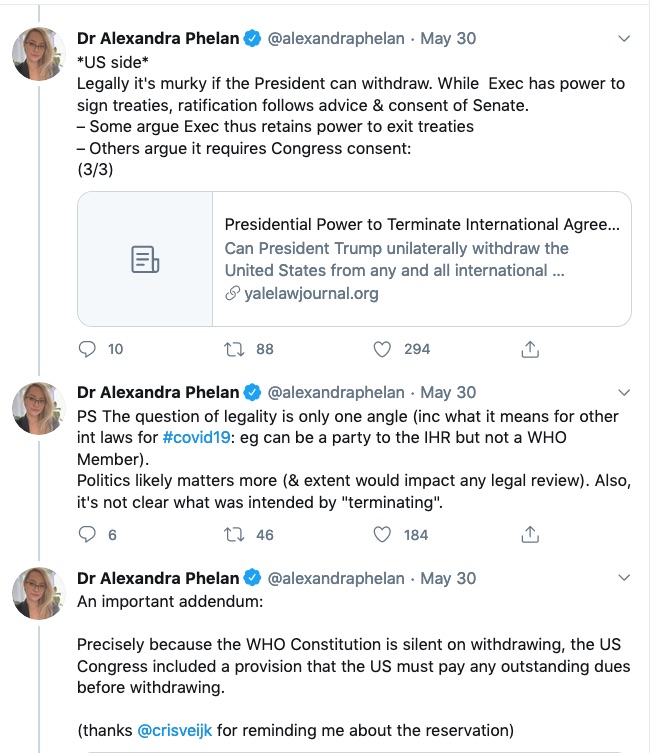 The George Institute for Global Health issued this statement of concern. 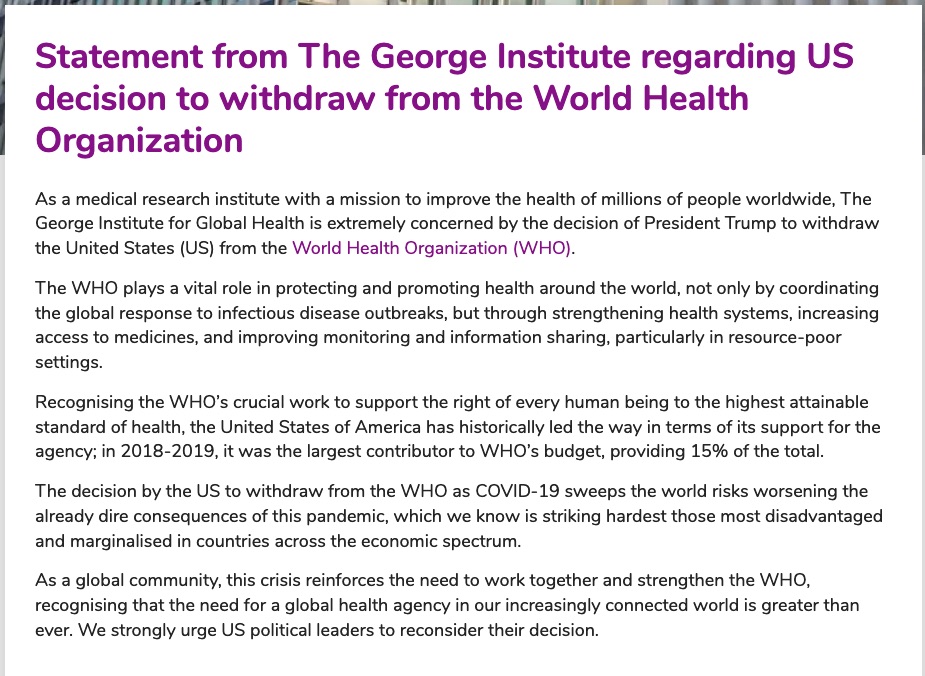