It is up to non-Aboriginal and Torres Strait Islander health professionals and policy makers to “share the load” in creating a culturally safe health system for Indigenous patients and health workers.

That was a big message from a number of speakers at this year’s Australian College of Nursing (ACN) National Nursing Forum in nipaluna/Hobart, including from Congress of Aboriginal and Torres Strait Islander Nurses and Midwives (CATSINaM) CEO Melanie Robinson.

Robinson’s keynote address began where she said policy must, in the stories of families and communities like hers, and in “truth telling” about the context in which we live and work, in the face of ongoing inaction by the Federal Government on the Uluru Statement of the Heart.

Marie McInerney reports below in her latest article for the Croakey Conference News Service from #NNF2019. Bookmark this link for all our coverage.

Melanie Robinson’s conference slide (see feature image, above) points to where some of her most effective policy work in Aboriginal and Torres Strait Islander health has been done in Perth.

But it also notes as a crucial point that the city where she did that work was once an “exclusion zone” for her people. Not back in the early days of colonisation but as recently as the 1950s.

Now CEO of the Congress of Aboriginal and Torres Strait Islander Nurses and Midwives (CATSINaM), Robinson was previously Acting Director of Aboriginal Health at the Child and Adolescent Health Service in east Perth, on Whadjuk land.

Between 1927 and 1954 it was a prohibited area for Aboriginal people, requiring Noongar people, the Aboriginal people of south-western Western Australia, to have a pass for work and for entering the area, and subject to a 6pm curfew.

“That’s not ancient history,” she said in her keynote speech to the Australian College of Nursing (ACN) National Nursing Forum. “Those people are still alive and still tell those stories.”

Finding out and telling those stories wherever she goes, particularly at mainstream conferences, is part of Robinson’s commitment to “truth telling” in the absence of a broader response urged from the Federal Government by the Uluru Statement from the Heart.

There’s the history that Australians learn at school about “settlement”, and “how great it was”, and then there’s the real story of massacres and discrimination, she says.

“I think we need to look at where we’re living, what actually went on there, what the true story was…and start sharing that with people,” she said.

“It’s not about blaming anyone but acknowledging as a broader group at a conference that we did this to people, we did trauma to people,” she said. “Telling the truth.”

Robinson, who was appointed to head CATSINaM in February 2019, has worked in diverse roles in nursing over the past 30 years, including clinical practice, education, and policy.

In a keynote address that explored the role of nurses in policy making, she won many hearts among the 600 plus delegates for the stories of her family and community that meant she didn’t want “to make policy that wasn’t going to make change”.

With cultural connections to the Gidja and Ngarinyin people, she grew up on Gibb River Station on Ngallagunda community in the Kimberley in north western Australia before moving to Derby as a young girl.

This gave her, she said, a deep personal understanding of the impacts of colonisation and the particular health challenges faced by rural and remote communities.

Her beloved grandmother was a member of the Stolen Generations, growing up at the Beagle Bay Mission near Broome, and dying at the age 52 from rheumatic heart disease which continues to have a terrible toll on Aboriginal and Torres Strait Islander people.

“All of this formed my journey,” she said, describing life growing up in a remote community where the wet season cut them off for three months a year and people relied on the Royal Flying Doctor Service for retrievals.

One memory remains etched in her mind and that of others in the community, when a young boy suffered profound burns after a jerry can of petrol caught fire.

“We remember the screams of that boy. That trauma stays with families”.

It’s better now, she says, because people have phones so and therefore greater access to health care, but remote Australia remains a difficult place.

“Whenever I sit in Canberra, I like to highlight the challenges we have in our rural and remote areas, because we take a lot for granted (in urban areas).”

Robinson’s keynote focused on her efforts as a policy advisor in Western Australia to build a better framework to encourage and support Aboriginal health workers, through university and then into good mainstream roles which many struggle to access.

She is “super proud” of the work she and her office did on the development of the WA Health Aboriginal Workforce Strategy 2014-2024, which “sets the bar across Western Australia” and is a “really important lever to really drive change”.

Robinson has written previously about the tragic 2016 death of Wiradjuri woman Naomi Williams and what it says about the need for Australia’s health system and workforce to engage meaningfully with cultural safety.

In an interview after her #NNF2019 address, she said racism in the health system is “alive and well”, with CATINaM members and students reporting that they “see it every day in their clinical placements, in their workplace”.

She called on non-Indigenous people to shoulder the “shared load” of embedding cultural safety in health care.

It was a call echoed in research presented there by Professor Odette Best, who has Wakgun, Goreng Goreng, Boonthamurra, Kombumerri and Yugambeh connnections, and her colleague Dr Melissa Carey,  who is of Anglo/Celtic and Māori descent (Ngati Raukawa Iwi).

The University of Southern Queensland academics said new requirements for teaching Indigenous health in Schools of Nursing and Midwifery will “force a paradigm shift” within the curriculum and schools, yet little is known how about prepared they are to do so.

Their research found some strength in the capacity at USQ, which has a long history of teaching Indigenous health through an Indigenous lens.

Best said this reinforced the notion that “white people don’t have a culture”, when the medical model in Australia is “very much a white-cultured response around health care”.

Failing to recognise that we are all “culture bearers” leads to “othering” of certain cultures, added Carey:

“I think as nurses it’s really important that we have the understanding that we’re all working from a context of knowledge and understanding based on how we were raised and the culture we grew up in,” she said.

Watch our interview with Best and Carey below, where they also discuss concerns about the Australian Health Practitioner Regulation Agency (AHPRA) consultations on a proposed definition of ‘cultural safety’ that may diverge from the “beautiful” definition developed by the late Maori scholar Dr Irihapeti Merenia Ramsden.

Croakey also spoke separately with Best at the ACN nursing history forum, which preceded #NNF2019, to discuss her work on creating a historiography of Aboriginal and Torres Strait Islander nurses and midwives, a group she says can “flip the deficit narrative” in Indigenous health, and bridge critical gaps in Australia’s labour workforce history. See the interview here.

Best has interviewed Aboriginal and Torres Strait Islander nurses and midwives with more than six decades’ experience in Australia’s health system and she said “without fail, every single woman talked about the racism they copped”, and not just from patients:

People get uncomfortable about (this) because everyone loves nurses and midwives, but as a workforce there are issues of racism within nursing that have impacted foundationally and fundamentally on most Aboriginal and Torres Strait Islander nurses and midwives.” 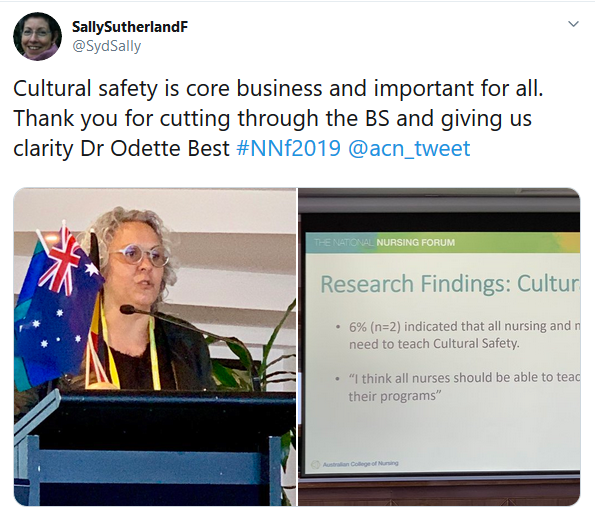 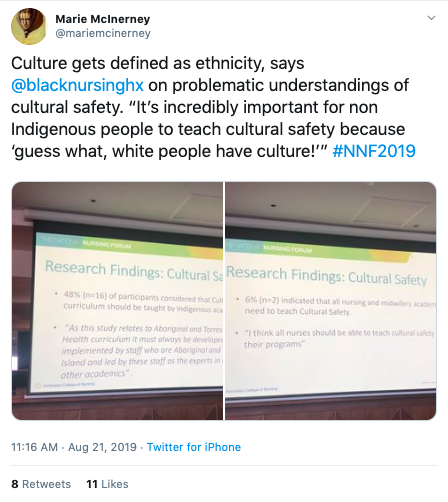 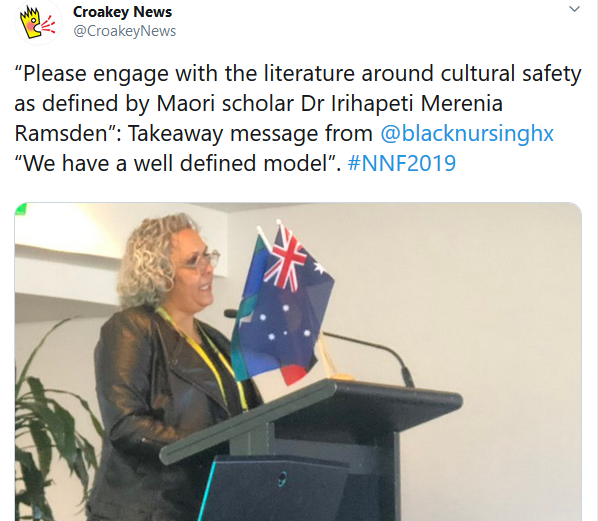 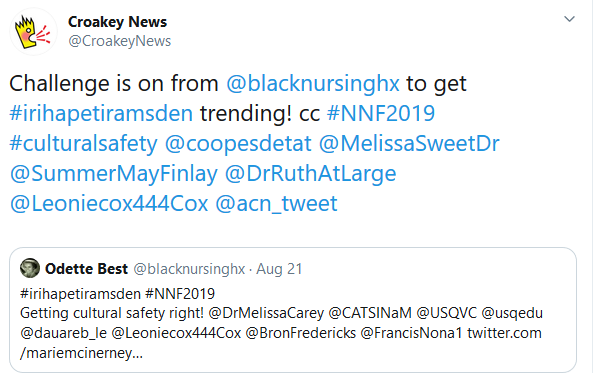 Belinda Fenney-Walch and Rosie Smith, a palawa woman and great-granddaughter of the legendary Fanny Cochrane Smith, gave a compelling presentation at #NNF2019 about why cultural safety matters. See their slides, and some of the tweets, below. 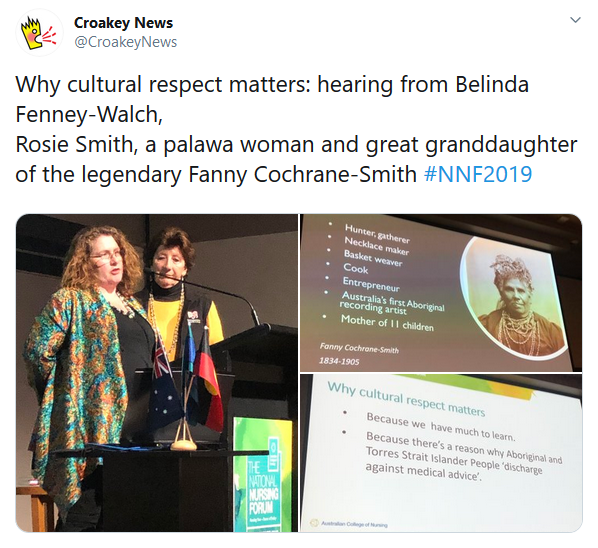 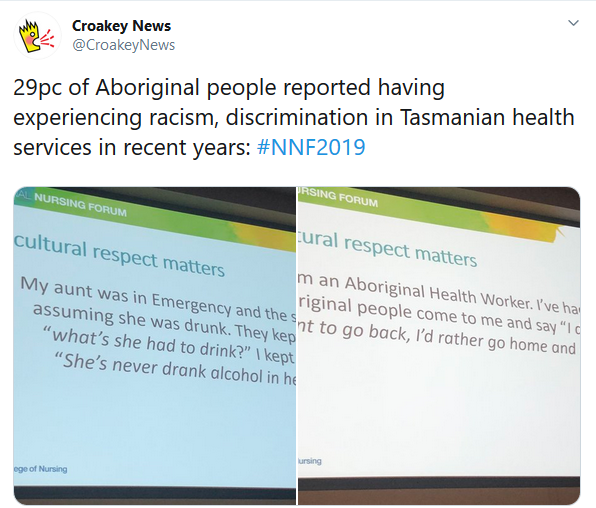 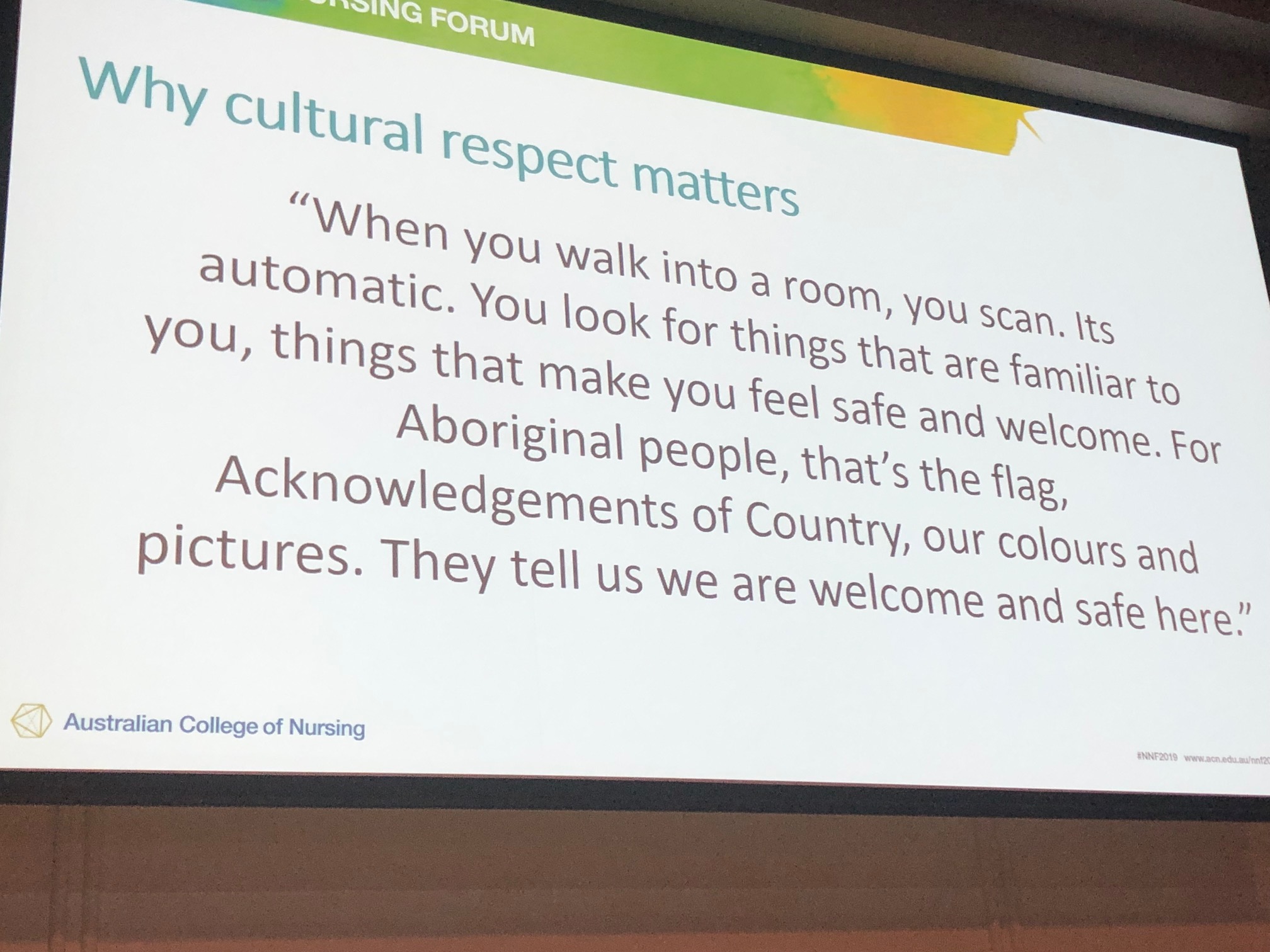 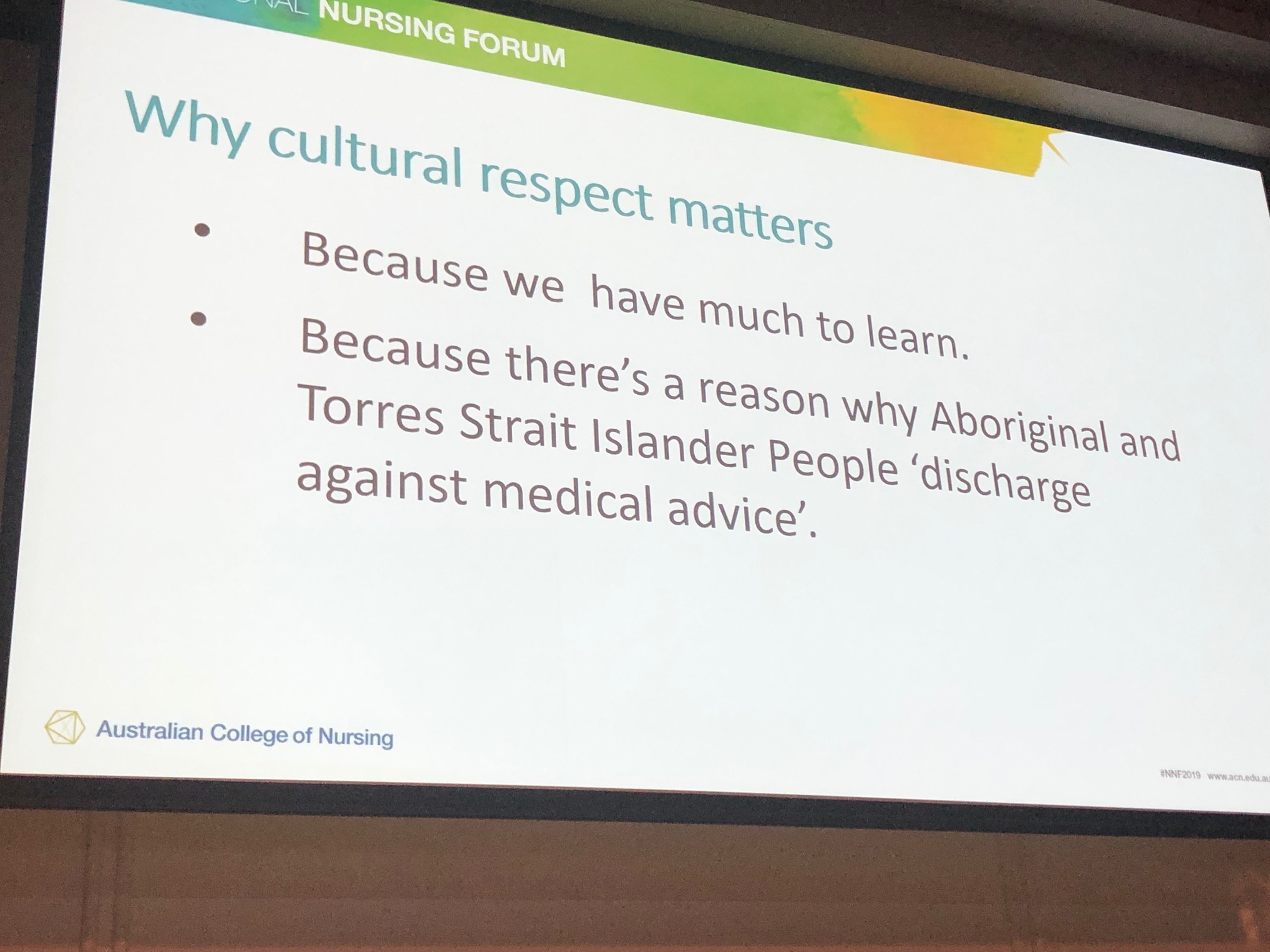 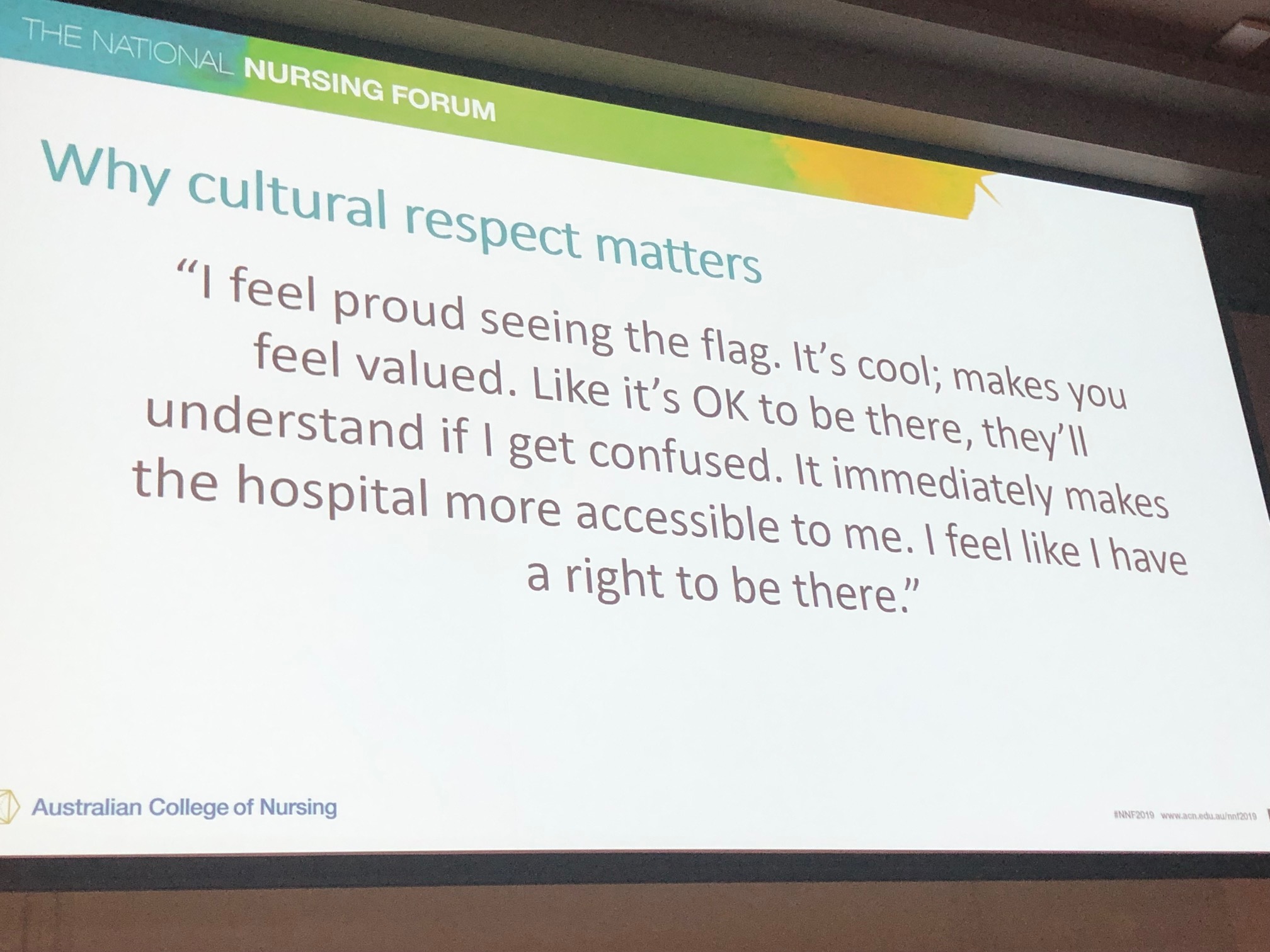 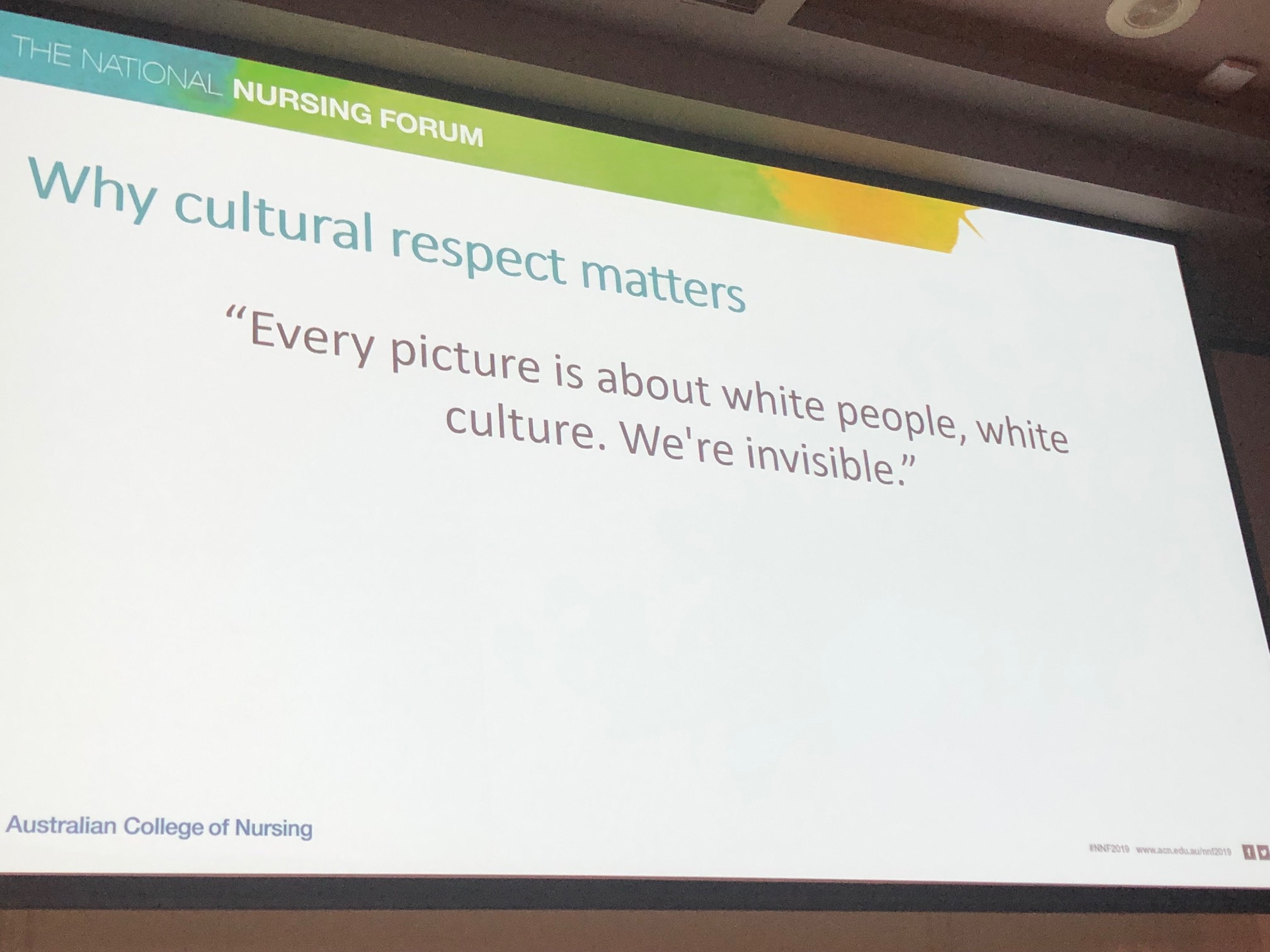 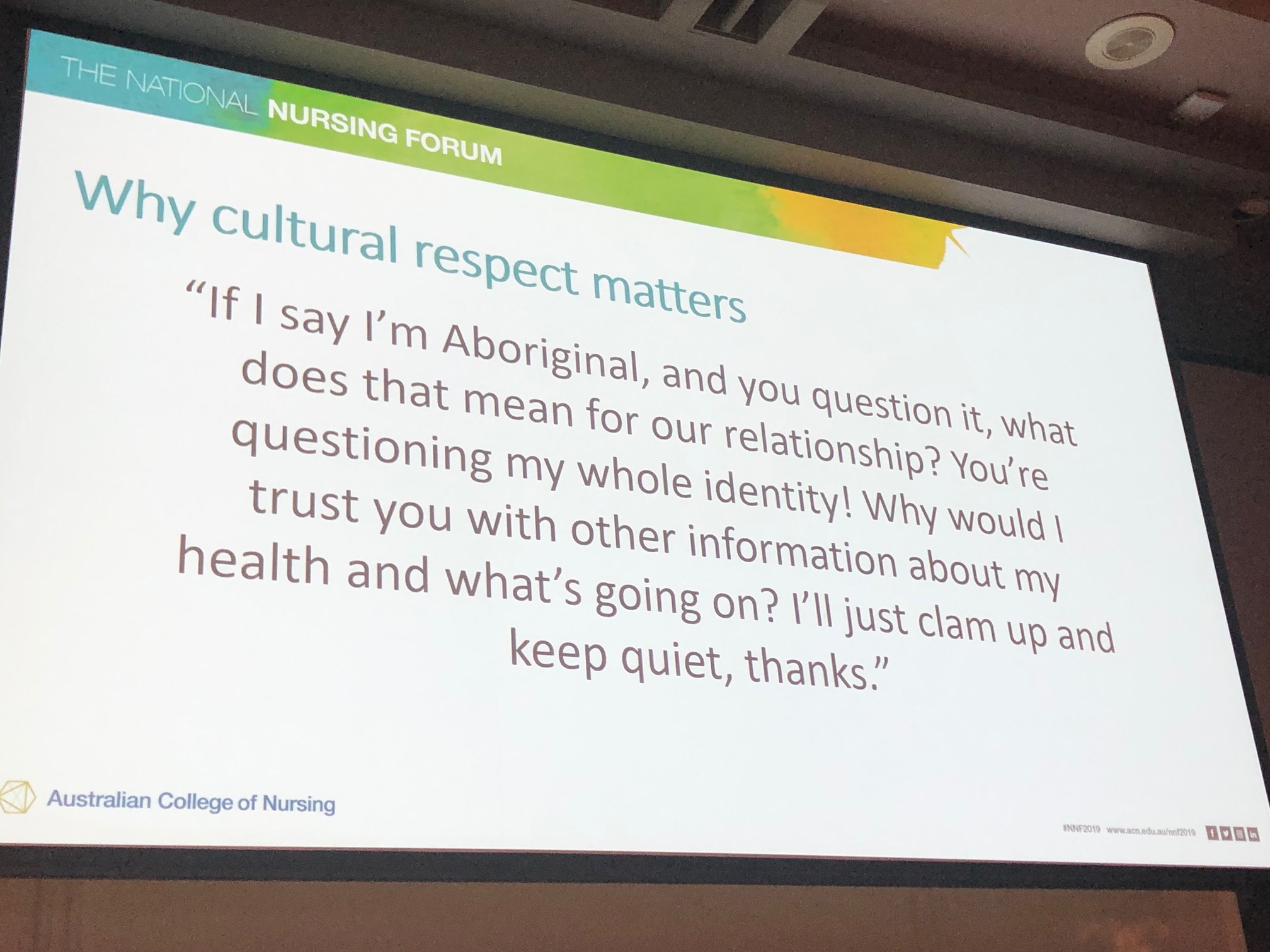 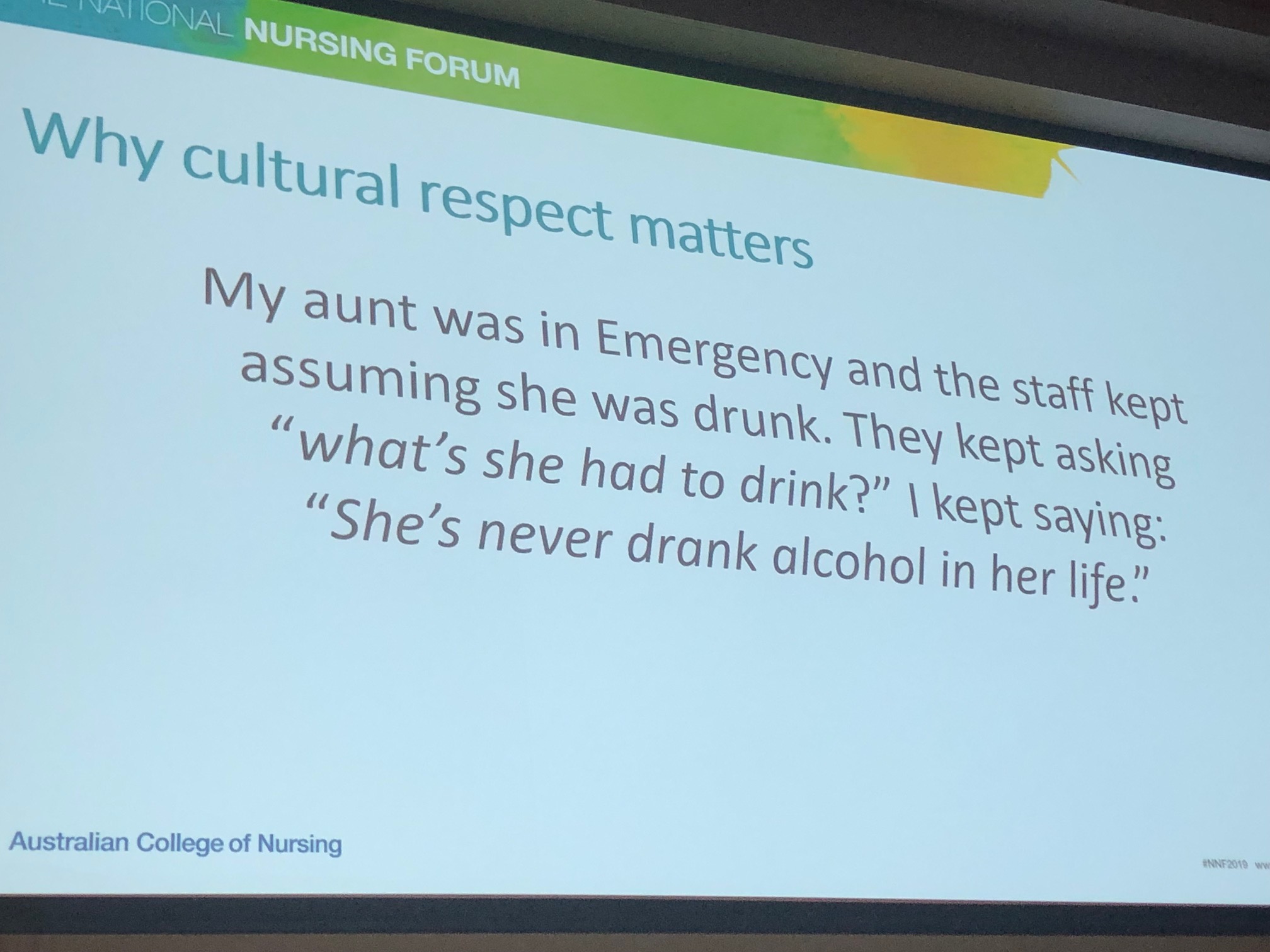 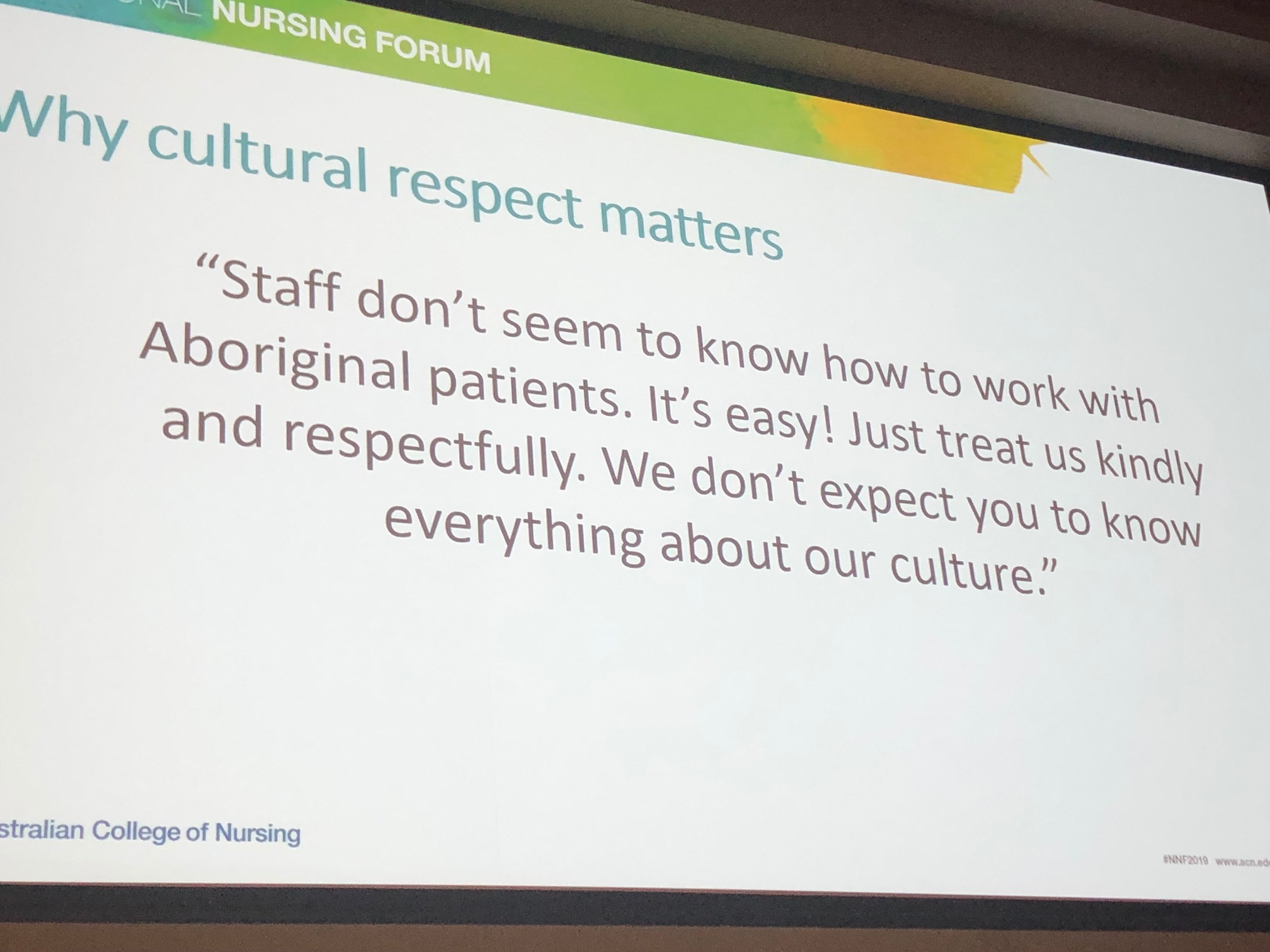 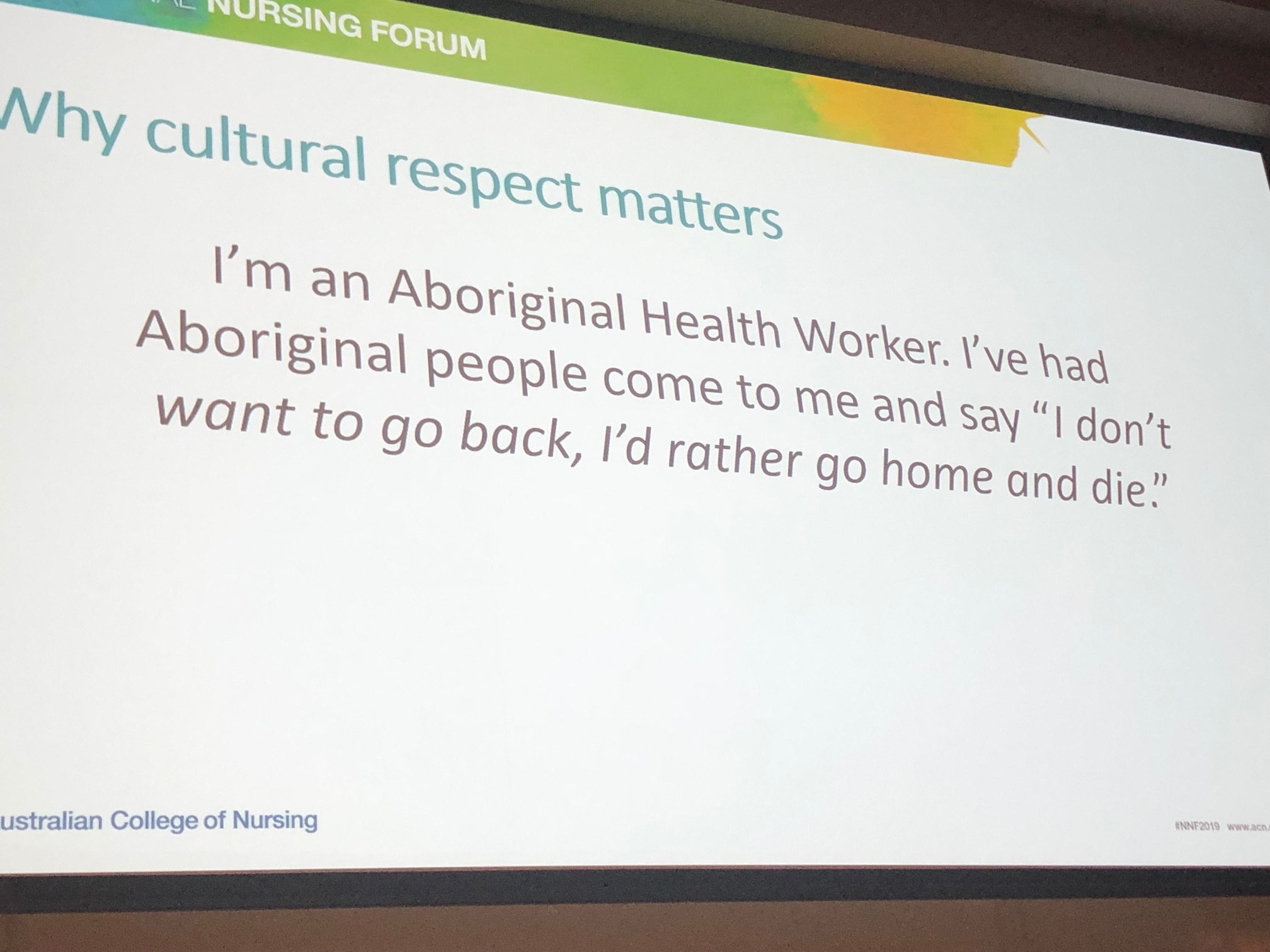 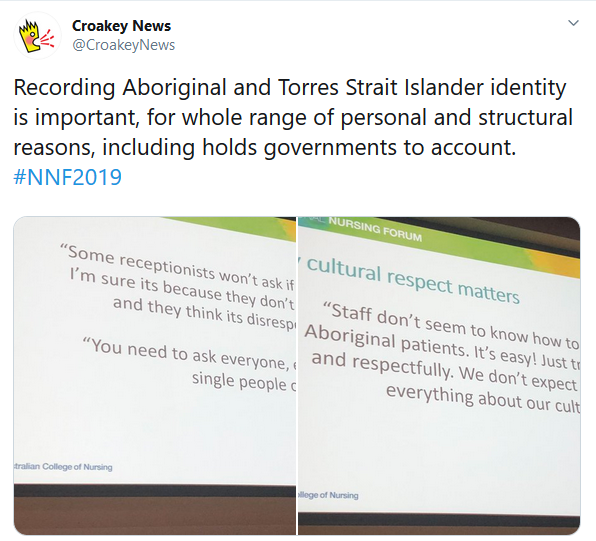 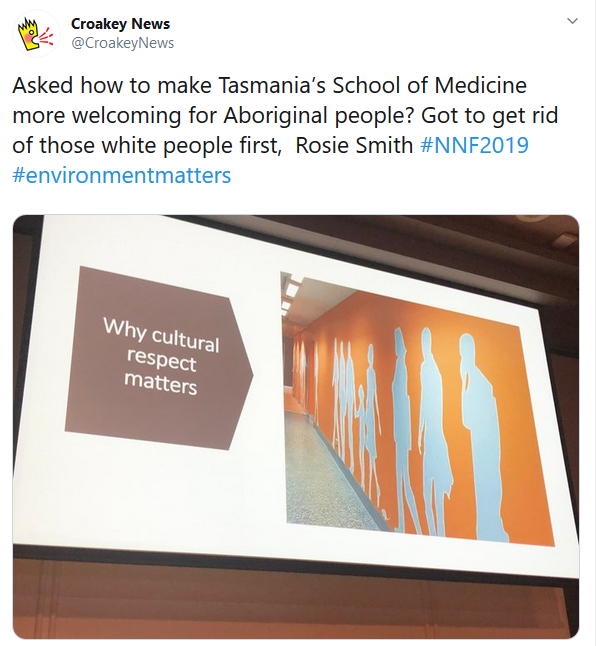 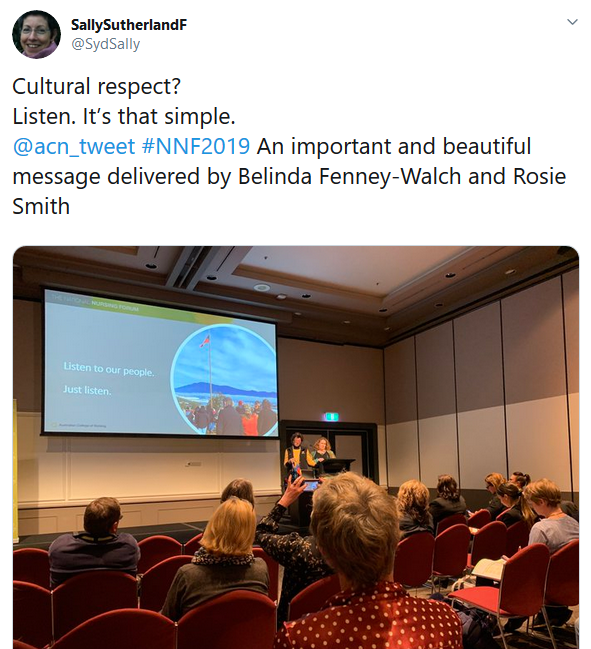 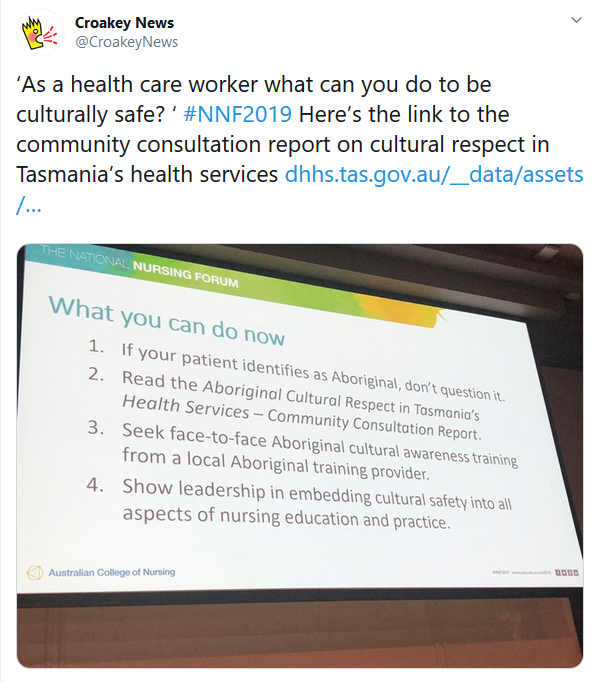 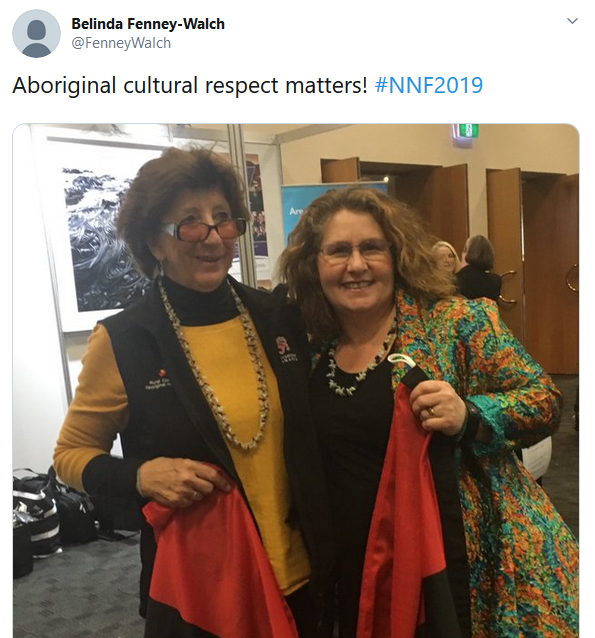 We’ve also clipped some of the Twitter reaction to Robinson’s keynote at #NNF2019. 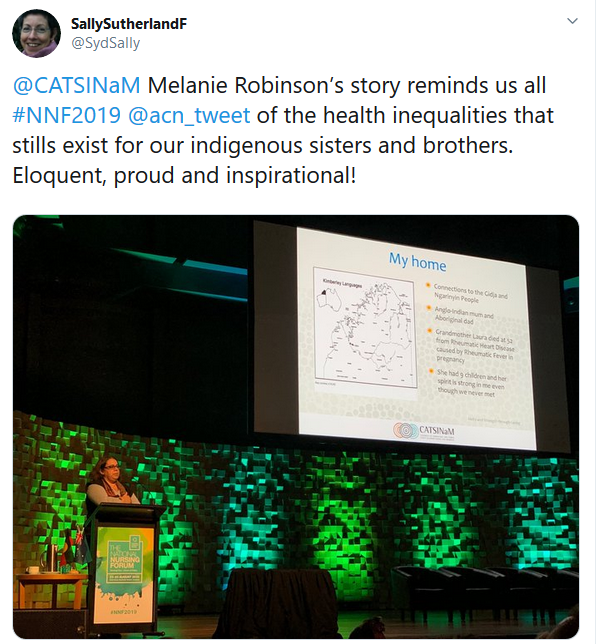 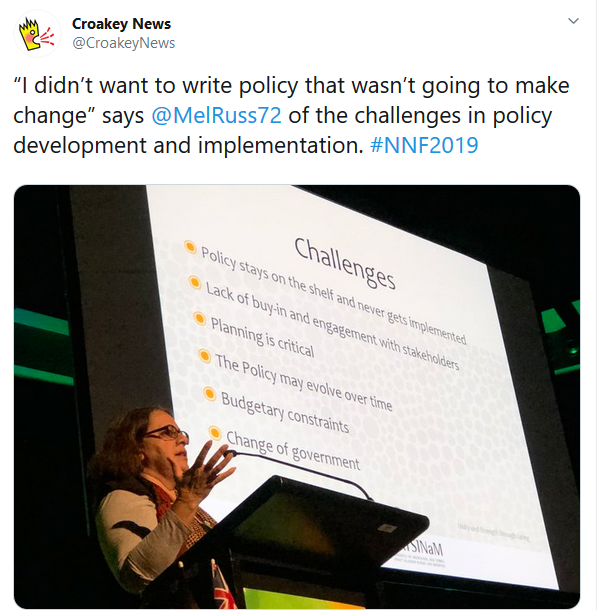 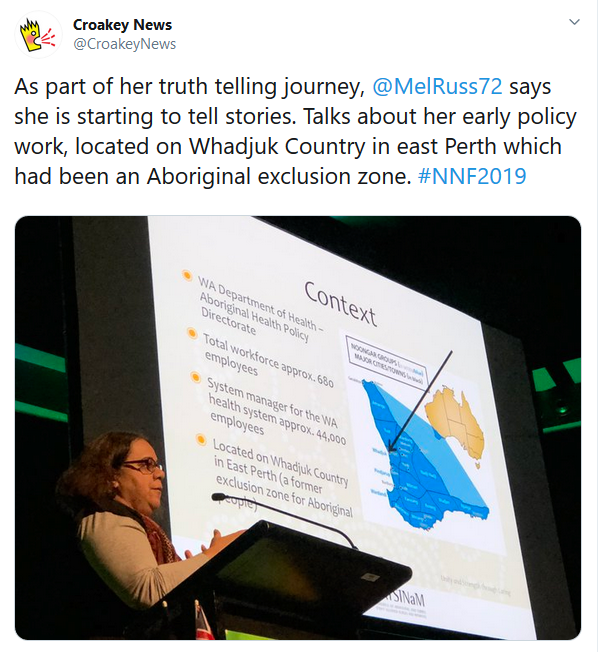 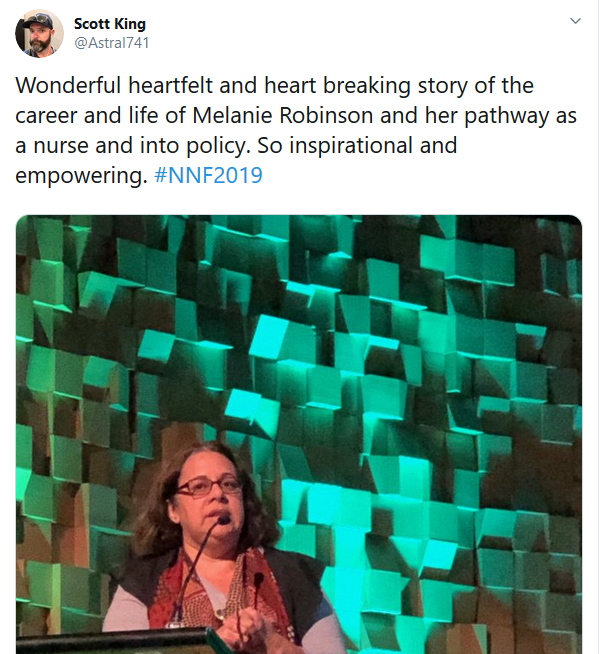 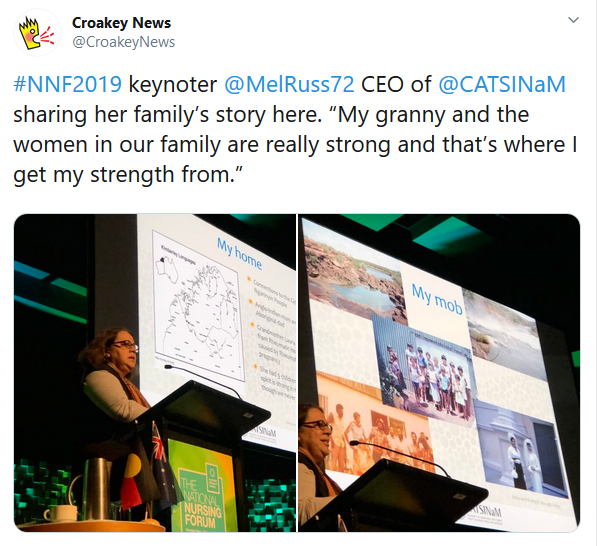