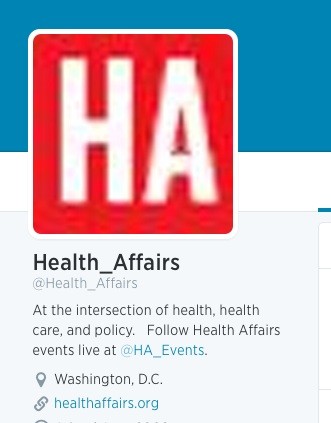 A just-released study by researchers from the University of Pennsylvania finds that only 14 percent of health policy researchers are using Twitter to communicate their research findings.

Approximately 20 percent use blogs and Facebook, but the majority (65 percent) rely on traditional media channels, such as press releases or media interviews.

It’s surprising, given that academic journals are using Twitter, along with major health agencies, health officials, and health care organisations.

The paper cites 73,000 followers for the journal Health Affairs in which it is published, the Centers for Disease Control and Prevention regularly disseminates public health information to 290,000 followers, and clinician and health policy guru Atul Gawande has 91,000 followers.

Across the Atlantic, the British Medical Journal has 126,000 followers, the National Institute for Health and Care Excellence has 49,2000 and Chris Ham, Chief Executive of the King’s Fund, has 14,600.  Here in Australia the Medical Journal of Australia has 6,193 followers and Croakey has 9,450.

It’s very likely that all of these Croakey followers are also following all of the others I have listed; but if the findings of this paper translate to Australia, it’s very unlikely they are using their Twitter feed to inform the world about their research.

There is some good company out there in the Twitterverse and some great examples of how to use it effectively.

But university-based researchers described social media as being incompatible with research, of high risk professionally, of uncertain efficacy, and – this might be important – an unfamiliar technology that they did not know how to use.

Many believe that the culture of social media is incompatible with that of science and research, describing social media as crowded with opinion and “junk.” They were concerned about allowing their scientific results to be presented in close proximity to opinion pieces and about being perceived as advocates or as self-promoting.

Many researchers confess they lack the confidence to use social media. For example, they did not think their work was amenable to communication in a 140-character limit, despite the ability to link to more substantive content. However, one suspects that many of these doubters are the same researchers who cannot write a succinct one-page media release!

Clearly what is needed is evidence – research to clarify whether Twitter is an efficacious way to communicate evidence to decision makers, media and the general public.

The authors state that determining how health researchers can best use and adapt social media to communicate evidence to policy makers should be a priority for universities, research funders, and scientists.

They cite the work in the US of the National Institutes of Health and the Patient-Centered Outcomes Research Institute in this regard.

And then what is needed is some training.  This would be a good chance for senior researchers to learn from their students!

Here in Australia perhaps we could drive our own research through the Croakey blog, collecting information about how health policy researchers currently use Twitter and what would improve their use.

After all, Health Minister Peter Dutton has 10,500 followers and the Department of Health has 16,200.  Someone must read what comes in!

On a more serious note, as someone who works in health policy (and tweets) and who cares about ensuring that the results of research investments are used to inform the process of developing, implementing, and refining health policies, it is such a pleasure to see a research paper like this in a major international journal.

I encourage you to read it – and tweet your thoughts.

And on similar themes, here is a paper by Professor Deborah Lupton of the News and Media Research Centre at the University of Canberra,‘Feeling Better Connected’: Academics’ Use of Social Media.  The abstract follows:

This report outlines findings from an international online survey of 711 academics  about their use of social media as part of their work conducted in January 2014. The  survey sought to identify the tools that the respondents used, those they found most useful and the benefits and the drawbacks of using social media as a university faculty member or postgraduate student.

The results offer insights into the sophisticated and  strategic ways in which some academics are using social media and the many benefits  they have experienced for their academic work. These benefits includedconnecting and establishing networks not only with other academics but also people or groups outside  universities, promoting openness and  s haring of information, publicising and  development of research and giving and receiving support.

While the majority of the  respondents were very positive about using social media, they also expressed a range of concerns. These included issues of privacy and the blurring of boundaries between  personal and professional use, the risk of jeopardising their career through injudicious use of social media, lack of credibility, the quality of the content they posted, time pressures, social media use becoming an obligation, becoming a target of attack, too much self-promotion by others, possible plagiarism of their ideas and the commercialisation of content and copyright issues. The report ends by contextualising the findings within the broader social and political environment and outlining areas for future research.

Growing calls for political leaders to act on the evidence, to improve COVID control