Two researchers tell of their transformative discovery of ecohealth

Discovering the field of ecohealth at a 2007 conference was a life-changing experience for two young scientists, Jonathan ‘Yotti’ Kingsley and Dr Maya Gislason.

A similar opportunity now awaits others, they say, thanks to the Oceania EcoHealth Symposium that will be held next month at The University of Melbourne.

How a conference became a life-changing experience

In late 2007 I had the privilege of attending the Asia Pacific EcoHealth conference: People & Places in a Changing World, held in Melbourne.

The conference couldn’t have come at a better time for me. I had just completed a Masters at the University of Melbourne on the health impacts of Aboriginal Victorian People’s connection to Country, had been flying in and out of community development positions in North Western Australia for 3 years as an Indigenous Community Volunteer, and had just taken up a position in the State Government.

But I found myself feeling isolated with no community to share these passions with. When I attended this conference, I realised I wasn’t alone, and felt like I could somehow contribute to making positive changes by being part of this collective.

The most fundamental shift in my thinking came on the second day of the conference. I listened to a keynote speaker, a Merriam descendant of the Torres Strait Islands, Kerry Arabena (now Professor, but at this point a PhD candidate) who blew me away with her passion and strength.

She mentioned two points that have stuck with me since. Firstly, our ecology is fundamentally linked to our health, and Aboriginal cultures around Australia have a critical part in improving this understanding.

The second point had a profound impact.  She said as young women, working in the health sector, she used to get frustrated with the lack of action occurring and poor understanding (or want to understand) how to assist the most vulnerable, at risk and marginalised people in society by individuals in positions of power.

I felt exactly the same while working in the State Government – I was totally angry at the systems in place where institutionalised racism was evident.

Kerry’s recommendation at the conference was you have to let go of this anger to make real change to individuals, communities and governments because you can get caught in a trap of blaming otherwise.

Since the conference I have never lost these ideas, passion and dedication to this cause and have embraced and immersed myself in the concept of ecohealth.

I have done this through membership in the EcoHealth Student Section, completing a PhD in a related field, participating in the EcoHealth biannual conferences, and through advocating key ecohealth concepts.

• Jonathan ‘Yotti’ Kingsley is a Research Fellow at Deakin University. 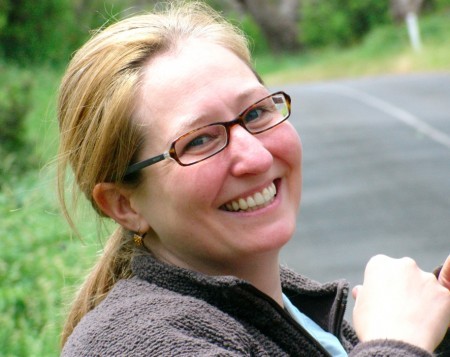 In January 2007 I left Canada for the UK to pursue a doctorate in medical sociology. I felt excited by my academic research, yet discouraged as I had yet to figure out how to link my former profession as a community development consultant working at the interface between environment, development and social justice issues with my current research.

Serendipitously, I saw the Asia Pacific EcoHealth Conference and, although I had never heard of echohealth, I was attracted to its embrace of scientific research, community engagement and the study of health in the nexus between the social and the ecological.

After feeling fragmented and isolated in my graduate work, I felt a surge of excitement and convinced the Foundation for the Sociology of Health and Illness to fund my trip to Australia.

Upon arrival, my concern about over-investing hope and resources into attending the conference began to dissolve. The warmth of the organisers and the relaxed atmosphere of the conference disarmed me as did the kind person who noticed I was a newcomer began introducing me to other participants.

I quickly recognised that a number of eminent scientists and social researchers were present and that the newly emerging field of ecohealth is being championed by visionaries, many of whom hail from Australia. By the end of the conference I knew that I had found my academic home.

Attending this conference changed my life in part because this field makes sense to my transdisciplinary orientation to scholarship and also because I have invested significant energy and time into this scholarly community.

I am now setting out an independent research career, which is rooted in ecosystem approaches to health research and actively supported by people I met at that conference. I continue to be so grateful for my time in Melbourne in 2007.

• Dr Maya Gislason is a Postdoctoral Fellow at the University of Northern BC, Canada

• For more information and to register for the Oceania EcoHealth Symposium (a free event), please go to http://www.onemda.unimelb.edu.au/oceania-eco-health-symposium-linking-peoples-landscapes-health-and-wellbeing

• Yotti would like to dedicate his reflections to Professor David Aldous, who was a gentle, compassionate and scholarly man, who guided Yotti through his Masters with care and thoughtfulness, and who will be greatly missed in academia and beyond.

PrevPreviousSimon Chapman honoured as Skeptic of the Year: a good time to look back on the historic tobacco plain packaging campaign
NextWhy mental health is music to your earsNext