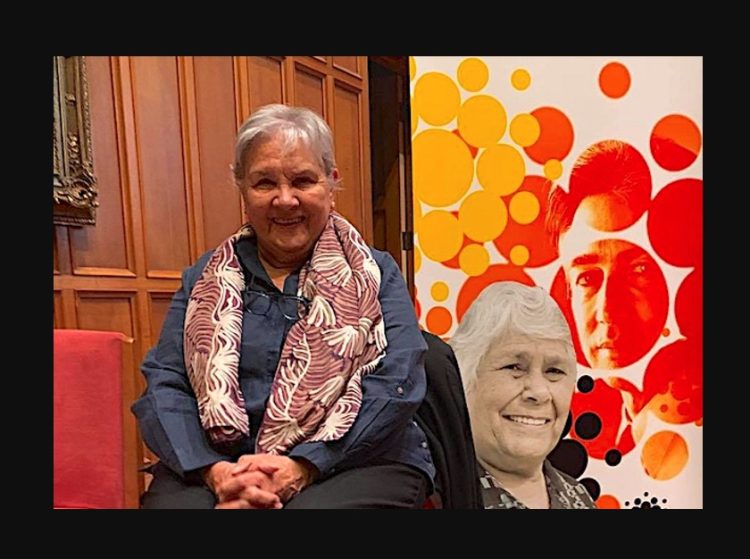 Pat Anderson, at the 2021 Lowitja O’Donoghue Oration. Photo courtesy of the Lowitja Institute

Introduction by Croakey: An Aboriginal and Torres Strait Islander Voice to Parliament could offer Australia “something powerful and unique”, including new ways to manage crises like the climate emergency and COVID-19, according to Aboriginal health leader Pat Anderson.

Delivering the 2021 Lowitja O’Donoghue Oration in Adelaide last week, Anderson called on Australians to invest determination, imagination and true generosity in embracing the calls of the Uluru Statement from The Heart, as Marie McInerney reports below.

Aboriginal health leader Pat Anderson has spoken out against the Federal Government’s co-design process for an Indigenous Voice, warning that tackling critical Indigenous rights issues “half-heartedly or high-handedly will be a recipe for continuing failure”.

Anderson, chair of the Lowitja Institute, last week delivered the 2021 Lowitja O’Donoghue Oration, hosted by the Don Dunstan Foundation in Adelaide, where she urged Australians and Australian governments to embrace the Uluru Statement from The Heart as a “gift to the nation”.

Her address came on the fourth anniversary of the Uluru Statement and just after it was awarded the 2021 Sydney Peace Prize, where it followed in the footsteps of Black Lives Matter and the #MeToo movement, Senator Pat Dodson, Archbishop Desmond Tutu, Noam Chomsky and Arundhati Roy.

The Peace Prize hailed the Uluru Statement for “bringing together Australia’s First Nations Peoples around a clear and comprehensive agenda; for healing and peace within our Nation and delivering self-determination for Aboriginal and Torres Strait Islander Peoples, that enables Australia to move into the future united and confident.”

Yet it was abruptly rejected by then Prime Minister Malcolm Turnbull soon after it was delivered in 2017. The Statement’s “carefully thought out and extensively debated proposals for truth telling and treaty making were attacked by many mainstream commentators as if the history of dispossession didn’t happen”, said Anderson.

Anderson, an Alyawarre woman from the Northern Territory, accepted the Sydney Peace Prize along with fellow Indigenous leaders Noel Pearson and Professor Megan Davis, who had also played a key role in the development of the Uluru Statement that emerged through a process of 12 Regional Dialogues, held from the Tiwi Islands to Hobart, and Perth to Sydney.

The process was, Anderson said, unprecedented, the first time First Nations people of Australia “had sat down across the nation in a formal manner to deliberate on constitutional matters”.

Agreed at the National Constitutional Convention at Uluru in 2017, the Uluru Statement calls for Voice, Treaty and Truth: a constitutionally enshrined Indigenous Voice to Parliament, formal agreements between First Nations and non-Indigenous Australia and a process of truth-telling.

Anderson said it seeks to “change the narrative about who we are as a nation” and, in doing so, “provides a way forward on some seemingly unresolvable issues facing Australia”, such as how to care for Country and find a just settlement with First Peoples.

“We have been stuck on these issues for decades now,” she said, but the Uluru Statement proposes “a process and a structure within which we can bring to light the hidden histories and assumptions that continue to hold us back” and which could see Australians embark on a “journey of healing for the nation and the Land that sustains us”.

Anderson focused much of her address on the Uluru Statement proposal for a Voice to Parliament, which was, she said, “modest and reasonable” and “the only constitutional reform which accords with the stated wishes of our peoples”.

“And it is proportionate to the level of distress, anger and powerlessness being felt in our communities,” she said, rejecting the Federal Government’s co-design process for an Indigenous Voice as “a significant step away” from what the delegates at Uluru called for.

Anderson said a Voice to Parliament could also offer Australia “something powerful and unique” for addressing critical crises, like climate change and the COVID-19 pandemic.

“We are the oldest living culture on earth and the nation-state in particular at the moment could really use our knowledge,” she said, reminding the packed hall in Adelaide that looking after Country had been “our job” for thousands of generations.

“We cherished the land, understanding that our health relies upon its health,” she said.

However, in less than 250 years of colonisation, Aboriginal and Torres Strait Islander peoples’ knowledge and practices, developed and refined over millennia, “have been marginalised just as we have”.

“Our adaptability, creativity and wisdom has been ignored, sidelined or suppressed, or seen to be of no value, our ability to care for Country has been profoundly undermined,” she said.

And the results “are all around us”, she said, citing increasing numbers of ever larger, ever fiercer bushfires, rivers running dry, oceans filled with rubbish and toxins, “in a crisis that poses an unparalleled threat to the sustainability of life in this land”.

Aboriginal and Torres Strait Islander knowledge “could help halt and turn back the destruction we see”, with a Voice to Parliament creating a permanent place in which to share that knowledge, she said.

In the oration, Anderson paid homage to O’Donoghue, a member of the Stolen Generations who went on to be founding Chair of the Aboriginal and Torres Strait Islander Commission (ATSIC) and to play a key role in drafting native title legislation that arose from the historic Mabo decision.

Anderson described O’Donoghue, now in her 80s and retired from public life, as formidable, “someone whose intellect and determination we were in awe of”, recalling times “when we were all quaking in our boots, and that includes Cabinet ministers”.

But despite this toughness, O’Donoghue was a very gracious person – “she doesn’t hold a grudge, is always willing to build bridges, and is always respectful of other people” she said.

As the theme for her speech, Anderson recalled O’Donoghue making a National Press Club address in 1997 where she, like so many Indigenous leaders before her, called for her people to have a voice in the affairs of the nation state that affect them.

It was then “the latest chapter in that long story that we have been telling since the beginning of colonisation: this is our place, and we demand a voice on matters that concern us,” Anderson said.

“We have been making this point for a long time, but too few of those in power ever seem able to hear us,” she said.

“We have been here for at least 65,000 years, according to the scientists, but we believe from the beginning of time. We have always been here.”

Anderson said what is being offered by the Uluru Statement from the Heart is transformative but it also demanded that non-Indigenous Australians ask themselves: “What are my values? What kind of country do I want to live in?  How do I want to relate to First Nations peoples, the ones who were on this land for thousands of generations before my mob arrived here?”

She left the audience with O’Donoghue’s words from her 1997 address:

We cannot lose the will to resolve these issues, because they will not go away. But tackling them half-heartedly or high-handedly will be a recipe for continuing failure. I believe that solutions are at hand. But they will require determination and patient effort, negotiation and compromise, imagination and true generosity.” 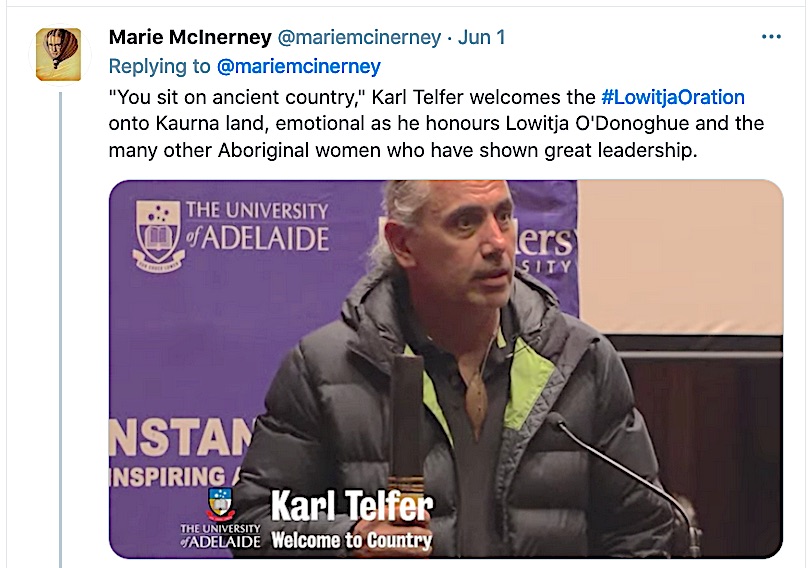 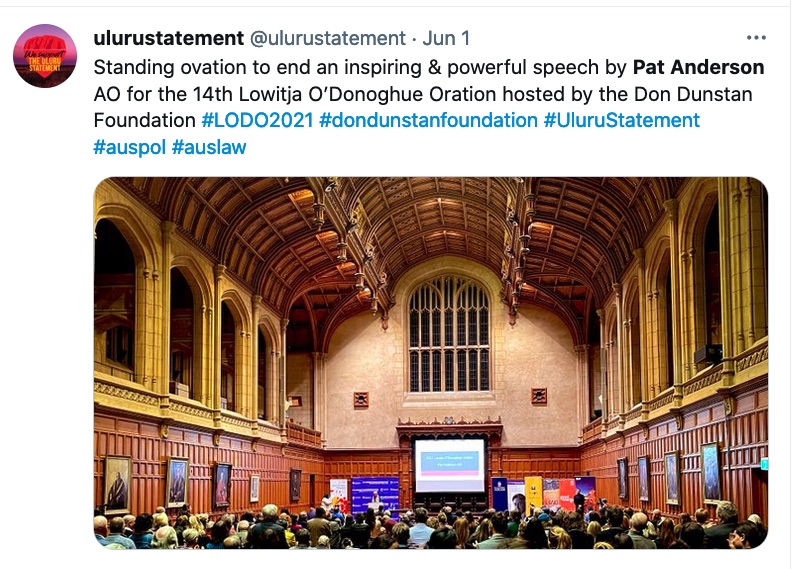 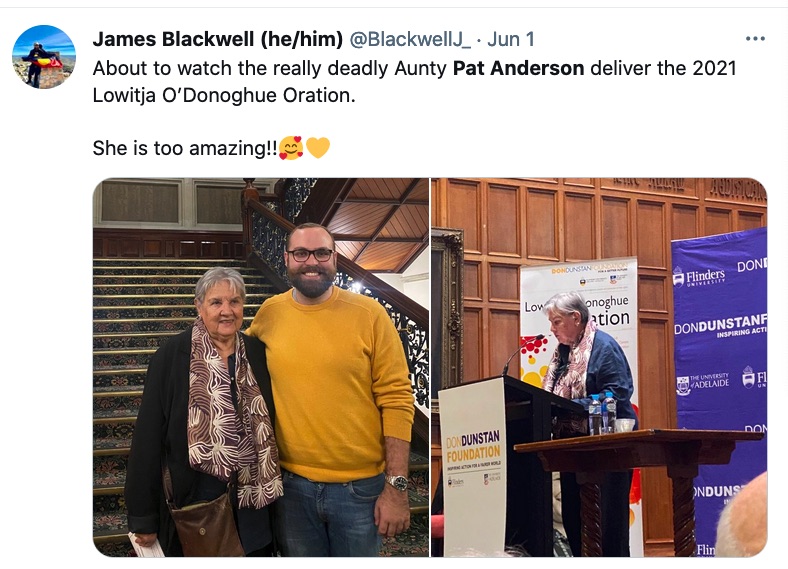