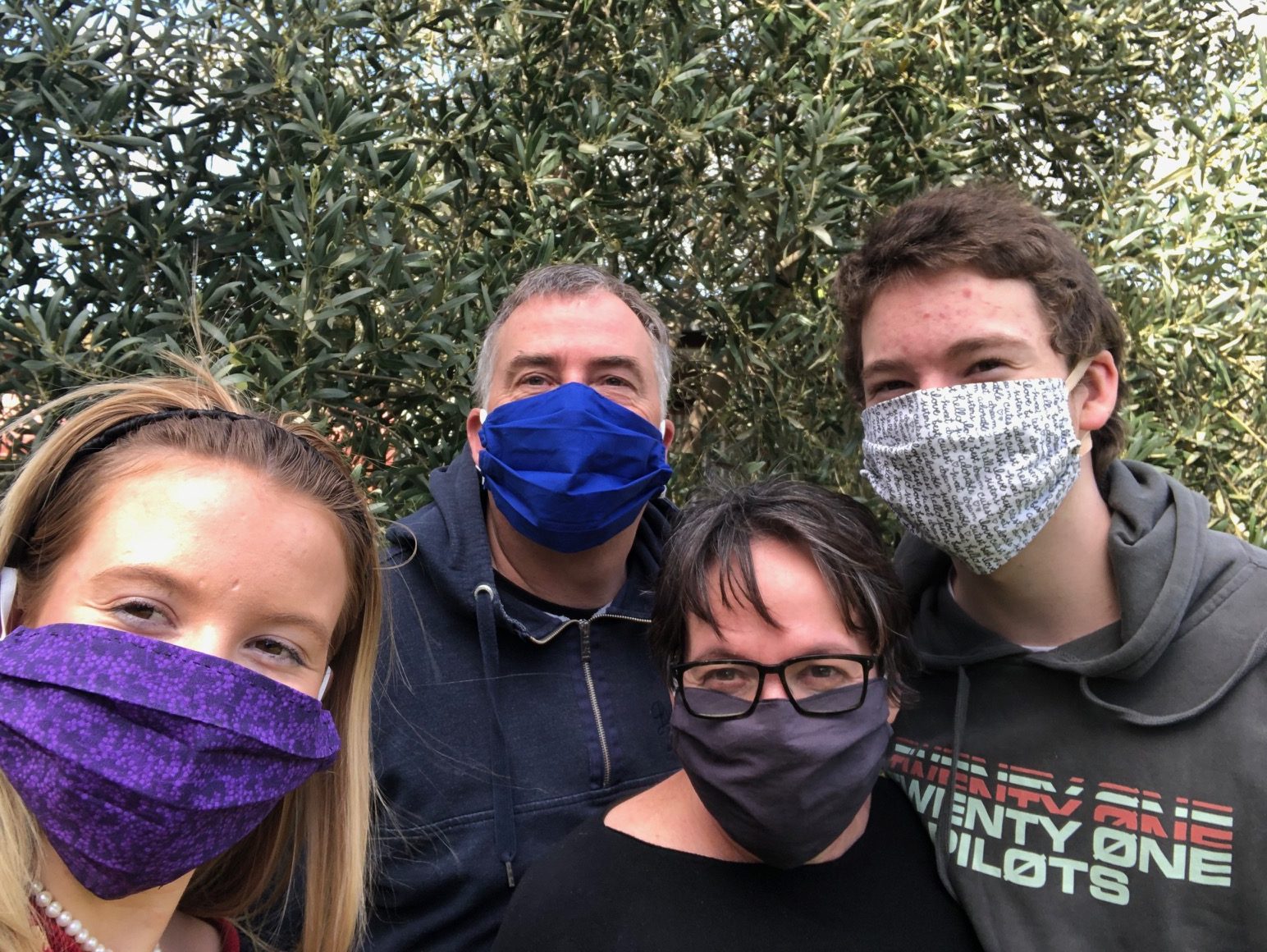 Unmasking privilege, stress, anxiety and cruelty in the pandemic

In Victoria, Premier Daniel Andrews has been under pressure from the Federal Government, State Opposition and many business leaders after unveiling a “safe and cautious” roadmap that likely won’t see Melbourne residents emerge fully from tough restrictions until the end of November.

I’m not sure when I properly noticed that it had become harder in Melbourne’s Stage 4 lockdown.

None of us liked going into it in early August, and much was spoken and written about how “it’s different this time”. But we were, mostly, convinced of the need.

It was clear that many were doing it very tough, losing jobs and loved ones, but the lockdown also started to bite in ways I hadn’t expected.

Previously addicted to live-tweeting the daily Daniel Andrews media conferences, it wasn’t too long into Stage 4 before I had to force myself to watch them, even for work.

I began thinking in capitals, like when a Sydney friend asked whether Stage 4 was any different to the first national lockdown we all did together. “ARE YOU KIDDING! THERE’S A CURFEW.  PRETTY MUCH EVERY SHOP IS SHUT. HAIRDRESSERS! BUNNINGS!

Or when I realised, in a phone call with a friend, how pessimistic I had become that it will ever be over. She’s recently gone through a marriage breakup and, during the pandemic, treatment for breast cancer, yet she was making plans by the truckload while I played mental Scrooge.

Hopefully we’ll get to see some live music again soon, she said. “Don’t think so,” I thought. Catch up with interstate family for Christmas? “Yeah right”. An overseas trip? “Ha!”.

There’s a hum of anxiety in increasing numbers of people around me, and of loss and grief, made worse of course by learning that we won’t loosen up this Sunday, as the initial plans had promised.

We know whatever we are feeling, many others – millions – are doing it tougher across the state. We wonder how the city will emerge, and how much of what people loved about it – not just its cafes and laneways but its cultural and civic life – will survive.

Conversations with colleagues that were always friendly but kept a professional distance now often involve tears and sharing stories – of a father with cancer who lives an hour away but hasn’t been hugged in months, parents of young children at their wits end trying to juggle work and school, adult kids stuck far away, major milestones cancelled.

One is having a down day today as the case numbers lift slightly again, while her colleague was in tears. Normally, she says, if you’re struggling and exhausted, you could pick a colleague or friend who was in a better place and they could help lift you up. But during the pandemic, “we’re all struggling and exhausted and trying to support each other as well”, she observes.

It goes beyond work, of course. A friend whose aunt has dementia and COVID-19 and lives in a nursing home sends me the spreadsheet she’s made tracking the facility’s growing cases.

Over the fence, I can hear the frustration and, sometimes, distress of our eight-year-old neighbour, a boy with disabilities who has been stuck at home, away from his friends, for so much of this year.

And then at times we want to shoot the messenger.

My sister was so excited about the pending relaxation of rules to enable people who live on their own to have an outside ‘bubble’ – only to find the fine print almost impenetrable.

“What are these guys doing FFS,” she texts. “This bubble thing is sounding so complicated I almost can’t be bothered.”

None of it, of course, is unendurable for most. But it’s been going a long time.

My Sydney friend, off to the cinema that night, was shocked to hear we hadn’t been out to dinner since she had visited in March. We were too cautious to rush out in those few weeks that we had between lockdowns in Melbourne.

Discussing all this, a local friend – pretty much confined to quarters through the pandemic by chronic illness – shared an article that contends that, in the early months of the pandemic, we used “surge capacity” to operate. US psychologist Ann Masten, who coined the term, says it refers to a collection of mental and physical adaptive systems that are designed for short-term survival in acutely stressful situations, such as natural disasters.

“When it’s depleted, it has to be renewed. But what happens when you struggle to renew it because the emergency phase has now become chronic?”

Today the Victorian Premier marked his 70th consecutive media conference in 70 days, marathon affairs where he stays until there are no more questions.

Earlier this week, we saw him asked by a journalist about mental health impacts of the news that we are not emerging from Stage 4 this weekend, as we’d hoped. Viewing via Facebook, I notice a comment from someone else watching. It’s not the pandemic nor the lockdown that’s getting them down, they say. It’s the relentless politicisation of it all.

There is much to critique – the hotel quarantine breach requires serious accountability, and it’s clear there are lessons to be learnt in contact tracing, as well as the erosion of public health investment over decades, although I don’t recall hearing the Victorian Liberals arguing on that front in the past.

That’s also the case for the Federal Government with its shocking record on public health, as my Croakey colleague Dr Melissa Sweet pointed out on Twitter, noting also it would be unwise of the media to uncritically amplify the Prime Minister’s talking up of the NSW response versus Victoria’s when the outcomes in NSW “are still unfolding”.

Amid the toxic acrimony, Dr Mya Cubitt, the Victorian Faculty Chair of the Australasian College for Emergency Medicine, last month advocated a move away from a “culture of blame” where “everyone tries to protect themselves, so you can’t get to the truth”.

Writing for Croakey, she urged politicians to learn “systems thinking” from the medical sector, warning that “if every error needs somebody to take the fall, people will hide mistakes, nobody will admit to them and the system will never be fixed”.

Just days later, Cubitt tested positive for COVID-19 and went into isolation away from her family and work.

Now recovered, she wrote about seeing the pandemic from the other side, and of feeling guilt for having contracted the virus – unwarranted but part of many unfolding stigmas. Above all, she felt a terrible sense of her privilege, compared to how so many others are faring.

In Melbourne, we’re still restricted to just one hour’s exercise a day.

If I pick up my preferred pace a little, it’s the time I need for the round trip from home to the Mantra Bell hotel in Preston. On its third floor, separate from all other guests, 65 refugees are detained. Some have been there for nearly a year.

Sometimes they are at the window, and can wave to supporters who walk by, but they are not permitted visitors or to step outside the hotel. They can be sent books and clothes but not medication or food. Not even treats. Chocolates and biscuits are confiscated or thrown away.

Moz Azimi is among them. He is a member of Iran’s Kurdish minority who fled persecution and sought to come to Australia by boat. He was granted refugee status in 2017 but is among those who were told, first by Labor Prime Minister Kevin Rudd and then Liberal leaders Tony Abbott, Malcolm Turnbull and Scott Morrison, that they can never settle here.

He was held in offshore detention on Manus for seven years but was among the Medevac refugees brought to Australia last year. He has been held — yes, captive — in the Mantra ever since.

“Inside this lockdown,” he told Croakey on Tuesday, “I personally spend 23 hours a day in my room. The other hour I am walking in the narrow corridor, going to the kitchen to make coffee or tea or to play ping pong in another room. We don’t go outside. We are not allowed to walk outside the building.”

He has deep sympathies for others in Melbourne, but he makes the point:

We have been locked up for seven years and our lockdown is indefinite.”

Like acclaimed Kurdish-Iranian journalist Behrouz Boochani, who finally won his freedom in New Zealand this year (told in an Australian Story episode this week), Azimi keeps himself going by being creative and courageous, for him through music and art.

Like Boochani, he’s made big connections. A recent song that he wrote, Love, was mixed and produced by Midnight Oil’s Jim Moginie, played on a guitar given to him by Jimmy Barnes.

But his world keeps getting smaller.

Before lockdown, the men at the Mantra were able to go on trips to the Melbourne Immigration Detention Centre. It had a bigger compound to walk around, a gym, and they could catch up with fellow refugees from Manus and Nauru.

Now, in the pandemic, all visits are cancelled and the only space where they can get fresh air is an enclosure that Azimi describes as a dungeon. He says it gets no sunshine, “no matter what hour the day”. Even their fellow Medevac evacuees, held in a motel in Brisbane, have balconies.

“It’s a big, big pressure on us,” Azimi says. “There are just 65 people in the whole of Australia, among 25 million people, who have been deprived of sunlight for more than 150 days.”

It’s a terrible measure of the distance between us, despite our proximity.

During the first national lockdown in March, I was struck, almost viscerally, by the joy that I found in hanging out the washing on our backyard clothesline. Fresh air, warmth of the sun, sounds of the birds.

Back then, at the start of the pandemic for us, and sometimes since, I was convinced of the chance for real critical change in this country. There have been some silver linings, of course, not least lifting the rate of Newstart, or JobSeeker as it’s now called, in belated recognition of its insufficiency.

I was sure that a State Labor Government like Victoria’s would take the opportunity – seeing the coronavirus spread “like wildfire” through US prisons – to dramatically reduce numbers of people in the state’s prisons and juvenile justice centres, so cruelly and stupidly inflated by a ‘tough on crime’ agenda played out by both sides.

I thought even the Federal Government would use the coronavirus as an excuse to finally release refugees like Azimi into the community, under cover of the dire health warnings from specialists that they too were at great risk in the pandemic.

Instead, the politics of incarceration threatens to get worse. Legislation giving Border Force officers the power to confiscate refugees’ mobile phones is heading soon to the Senate, where it will be in the hands of Tasmanian Senator Jacqui Lambie to determine (as she did the end of Medevac).

For Azimi, his phone is his lifeline. He calls his family every day, and uses it to stay in touch with all his supporters – lawyers, doctors, friends and allies.

At one point, I ask him what people could do for those held in the Mantra now. Send books? Movies?

He has one request: “Please ring Senator Lambie and tell her we are not bad people.”

That much we all know.

PrevPreviousCooperate on climate or we will be ‘doomed’: United Nations chief
NextOpening pubs, bars and nightclubs: what are the risks?Next