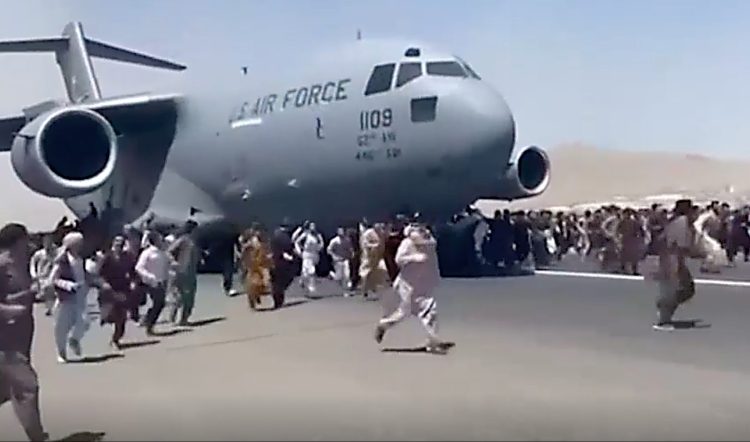 Traumatic scenes from Afghanistan are sending shockwaves around the world, with distressing repercussions for thousands of Afghan people living in Australia.

Together with a range of community groups, they are pleading for the Federal Government to step up its response, and local mental health services will also need to be responsive, writes journalist Cate Carrigan.

As chaos and confusion reign on the streets of Kabul, Australia’s Afghan community and peak refugee agencies are urging the Federal Government to implement an emergency intake of those most at risk from the Taliban.

The NSW Service for the Treatment of Rehabilitation of Torture and Trauma Survivors (STARTTS), the Asylum Seeker Resource Center (ASRC), and the Refugee Council of Australia have joined Afghan community groups and other human rights organisations backing calls for 20,000 to be resettled.

This follows a weekend offer from Canada to resettle more than 20,000 people at risk and the US accelerating its visa application process.

At a press conference yesterday Prime Minister Scott Morrison ruled out an emergency intake, saying Australia will only be resettling people through its official humanitarian program. However, the Prime Minister said the Government would resettle around 3,000 Afghans this year – double the usual number – through existing humanitarian channels.

The Prime Minister also announced the start of Australia’s emergency operation to evacuate Australians and visa holders, Afghan nationals, and others from Kabul, with many more flights to come.

A migrant and refugee resettlement agency, AMES Australia, welcomed efforts to bring more Afghans to Australia, and said they may require ongoing support, both financial and emotional.

AMES Australia CEO Cath Scarth said support does not end when they step off a plane in Australia and that they may well have experienced trauma, violence and fear, and need trauma counselling and ongoing case management.

The ASRC said human rights advocates, journalists, women professionals, activists and people who assisted the Australian Defence Force are at extreme risk, as well as ethnic and religious groups facing discrimination and violence under the Taliban.

Meanwhile, the Media Entertainment and Arts Alliance (MEAA) and the International Federation of Journalists have called on the Federal Government to provide humanitarian visas to Afghan journalists and media workers.

This year alone, more than 30 media workers have been killed, wounded, kidnapped or tortured in Afghanistan, the MEAA said in a statement.

While women journalists are particularly fearful, the Taliban are targeting all media workers including drivers, interpreters and fixers.

Barat Batoor, Organiser at Asylum Seeker Resource Centre (ASRC), said Australia is home to the fourth-largest Hazara population in the world: “There are thousands of people in the Australian community who have family members at grave risk right now from the Taliban.”

“We need to know what the Australian Government is doing alongside the international community to protect people in this emergency.”

Sayed Hussainizada, of the Australian Afghan Noor Association in Sydney’s south-west, whose members are predominantly from the Hazara, told Croakey that people in Afghanistan are “desperate, shocked and confused, and don’t know what to do”.

“The people don’t really want to leave their homes. It’s chaos, absolute chaos. People are scared and desperate for help.”

Hussainizada, who has extended family in Afghanistan, said there is a lot of fear amongst minority groups, as they await the next move of the Taliban.

“They [the Taliban] haven’t started killing people but the anxiety over the reimposition of a repressive regime is there. The brunt of it is being felt by ethnic minorities, women and girls.”

Hussainizada backs calls for a 20,000-place resettlement program to target ethnic and religious minorities, women and girls, and people in the arts and education.

The CEO of STARTTS, Jorge Aroche, told Croakey that Sydney’s Afghan community is facing a ‘double whammy’ at present with mounting concern about the situation in Afghanistan coupled with stress over the COVID outbreak.

“People are very distressed and terribly worried about loved ones, family and others they know in Afghanistan.

“It’s very difficult to contact family members, which is adding to their stress.”

On top of this, many of the Hazara community – about 60 per cent of Australia’s Afghan community – live around Auburn, Merrylands and Blacktown, which are some of the areas worst affected by COVID, he said.

STARTTS backs a seven-point plan from the Refugee Council of Australia – sent to Prime Minister Scott  Morrison – to support and protect the Afghan people.

The letter calls on the Federal Government to:

Aroche said the large proportion of Afghans who are in Australia as refugees are fearful of what might happen to their families and loved ones under the Taliban.

“We are very concerned because this community is quite vulnerable and has had fairly high rates of suicide ideation,” he said.

Aroche pointed out the many Hazaras on bridging and temporary protection visas remain very vulnerable.

“They have no permanent protection status and their lives have been pretty much on hold.

“They can’t bring family to Australia and they have also been affected by COVID-19 more than many because they live in the LGAs of concern in west and south-west Sydney.

“This [what’s happening in Afghanistan] will have an impact on mental health. We have seen quite high levels of stress and anxiety just in the last few days and I’m expecting this will grow.

“My fear is that because of COVID, isolation and other stressors, it will take longer for people to seek help.

“That of course will lead to a worse situation because people begin to deteriorate in a situation where they are isolated from family and regular social supports.”

Aroche points out that people on bridging visas and those without permanent residency are in an insecure limbo, where they are reliant on aid provided by NGOs and charities.

Access to social security is essential as it’s “more continuous and reliable income’’, he said.

For Sayed Hussainizada, of the Australian Afghan Noor Association, the fear is that the worst is yet to come in Afghanistan.

The future of the country depends on its people and the reaction of the international community and whether it remains silent on the previous brutal rule of the Taliban.

“The worst is yet to come and we are scared and feel betrayed. The future looks bleak at this stage but we hope the people of Afghanistan and hope will prevail.”