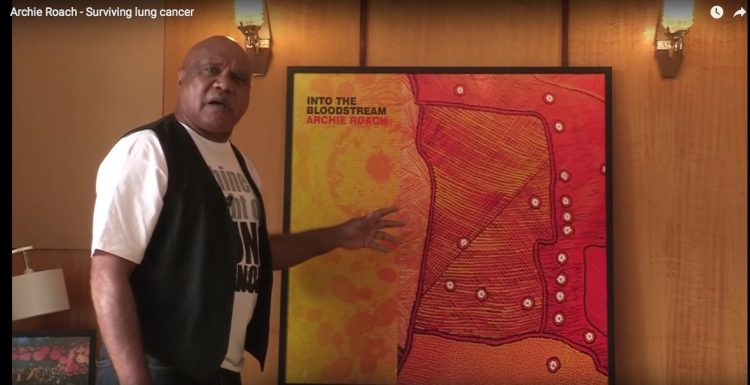 Using stories to tackle tobacco and related diseases: Hearing from the AHMRC conference 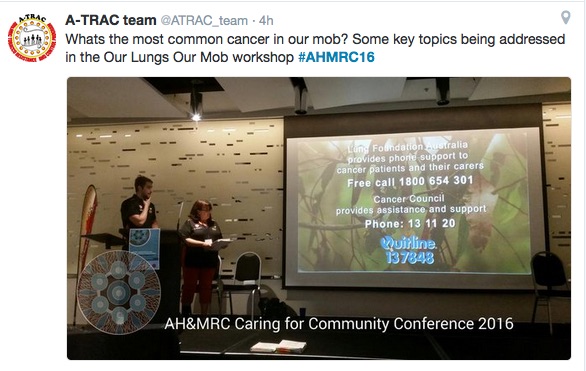 Stories from Aboriginal people who have had cancer are at the heart of two programs being rolled out across Australia to help combat high cancer mortality rates among Aboriginal and Torres Strait Islander people.

The Our Lungs Our Mob and Women’s Business programs are being delivered nationally by the Aboriginal Health Council of South Australia Inc (AHCSA) for Cancer Australia.

They were showcased recently at the Aboriginal Health and Medical Research Council of NSW conference in Sydney, Tackling Tobacco and Chronic Conditions.

“She touched many peoples’ hearts”

Mary Buckskin was one of the first Aboriginal health professionals employed in South Australia, firstly as a nurse, then as Aboriginal hospital liaison officer, clinical educator and policy adviser.

She was hailed in this obituary for helping to establish critical partnerships, projects and initiatives at the Council of Australian Government’s National Reforms in Aboriginal Health and being instrumental in South Australia’s bipartisan signing of the Oxfam Closing the Gap Statement of Intent to address Aboriginal health inequities.

“She was very dear to us all, she touched many peoples’ hearts and we really miss her,” Williams told Croakey at the conference.

“When she was diagnosed, she sent out an email urging everyone to get their health checks, so we’re really engaged personally and professionally on these programs. It’s a part of the healing, to get the information out as far and wide as we can.”

Our Lungs Our Mob and Women’s Business workshops are being offered to Indigenous health workers and Aboriginal community controlled health organisations so they can in turn offer them to their own local communities, whether as formal presentations or informal yarning sessions.

Coming with step-by-step instructions (see the Our Lungs Our Mob resource), they aim to provide culturally relevant and appropriate tools and resources to combat lower screening and later diagnosis rates among Aboriginal and Torres Strait Islander people that have been limiting their options for treatment and contributing to higher mortality rates.

The need is high: between 1998 and 2012, the cancer mortality rate for non-Indigenous Australians fell by 10 per cent, but rose for Indigenous Australians by 16 per cent. Recent research found that cervical cancer screening rates for Aboriginal and Torres Strait Islander women had not improved at all through the 25 years of the National Screening program.

In this video (below) made for the Our Lungs Our Mob program, Archie Roach talks in detail about how he initially wanted to ignore the symptoms of lung cancer that he was experiencing – “sometimes gasping for breath”.

He also describes how he felt when the diagnosis was delivered. “To be honest, I was pretty scared,” he said.

Archie then describes the surgery, which was much less invasive than he had feared but nonetheless knocked him around for some time.

He says his message is: If you’re starting to show symptoms, you need to go and see a doctor, have a thorough medical examination, because “if you leave it too long, it could kill you.”

(See also this previous Croakey story featuring Archie and his physician, that discussed the impact of trauma and racism on health, and the experience of Indigenous peoples in unequal access to and treatment in the health system.)

In another video, a young man called Bobby describes his experience, of how scared he was that he had cancer when he began to cough up blood. In fact, it turned out to just be a chest infection, and a very valuable prompt to give up smoking.

Hearing from Merle and her family

In this video, Merle and her daughter Valda talk about the impact on their family of Merle’s cancer diagnosis and treatment and what the recovery process involves.

The aims are to increase community awareness of the symptoms of lung cancer, so participants:

“It’s not rocket science. I always say I’m not a cancer specialist but I’m here to deliver this education around awareness about cancer.

Now is the time to start talking about cancer as we know how hard this is and it isn’t discussed often enough within our families. AHCSA plays a role in generating these sensitive discussions within the communities.

With a lot of the Aunties or Elders that I work with in the Women’s Business program, when I ask at the end what they’re going to do differently, they all say: ‘I’m going to tell my grannies, tell my nieces, going to talk to my family about the importance of having checks.’

Many of our services are overstretched and under-resourced so it’s finding the right person and using those ambassadors to drive the messages.” 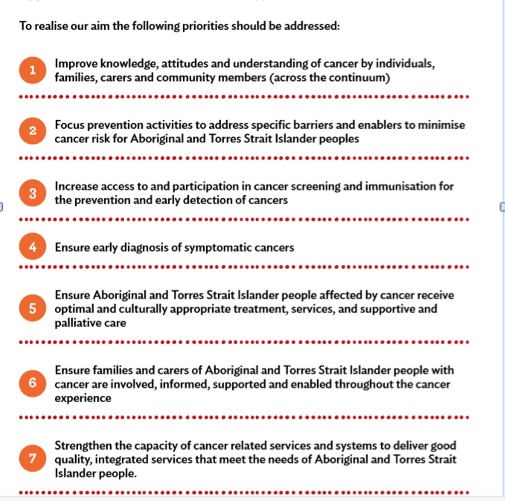 Williams said evaluation is a very important part of the Our Lungs Our Mob program. Evaluation forms are handed out at the end of each workshop and followed up after two weeks and again after three months.

“ACHSA is very proud to be delivering this,” she said. “Cancer is very common in all Aboriginal communities and it particularly affected us last year with Mary passing away from cancer. So we’re really proud that we’re able to take this on, because cancer doesn’t discriminate, it affects everyone and we’ve not been untouched by it.”

Addressing smoking in the Illawarra

The conference also heard about moves to create a more smoke-free environment at the Illawarra Koori Men’s Support Group, where Elders recognised smoking was causing both economic and health harms, but no-one wanted to discourage smokers from being involved in the group.

“We weren’t doing this to punish men who smoke,” said Stuart Porter from New South Wales who led the project.

“They’re all welcome but we’re trying to protect the health of young people, people who don’t smoke and those who are trying to quit. We’re serious about not smoking but not that serious that we don’t make smokers welcome.”

The initiative began with moving anti-smoking information outside to where the smokers were, acknowledging also that many were not seeing social media messages or watching TV campaigns.

With the help of high school students, the group did an “environmental scan”, taking photos of where butts were being left and stopped smoking near doorways or food, even outside.

The group also talked about how much support was being offered to its members who might want to quit, and how much it could shift expectations.

It’s an issue being increasingly discussed between health and social services, to challenge what VicHealth has described “the cultural acceptance of high smoking rates within marginalised communities”.

The group introduced a question on the form for new members asking ‘do you smoke?’. If the answer was yes, they were asked ‘would you like help to give up?’.

“Some were drinking 14 cups a day of coffee, dealing with custody issues, and were stressed to the eyeballs,” Porter said. “I try to get them to cut down caffeine, (and say): ‘You told me you got off the ice, you got off the alcohol: if you can do that, you can get off smoking’.”

Porter presented some of the lessons of the project, including the need to bust myths (such as that ‘rolling your own’ is safer for health) and the value of hearing Elders’ stories about the introduction of tobacco in their lives, such as one who talked about cigarette machines being introduced on the mission he grew up in. 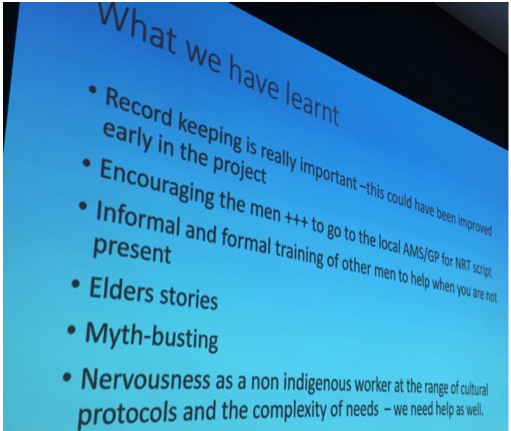 One of its most effective messages to women who were worried that they would put on weight if they gave up smoking was to cite evidence that they would have to gain over 40 kilograms above their recommended weight to equal the risk of heart disease posed by smoking. 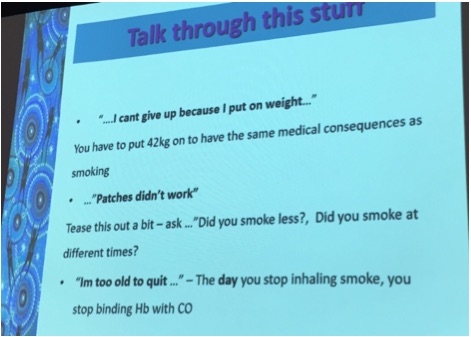 And watch another video about the Solid Mob’s Amazing Race to Happy, using game-based interactive learning to engage young people in health promotion, run by the Bullinah Aboriginal Health Service. 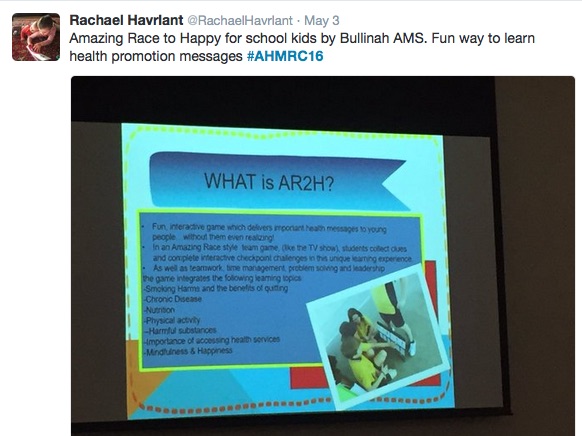 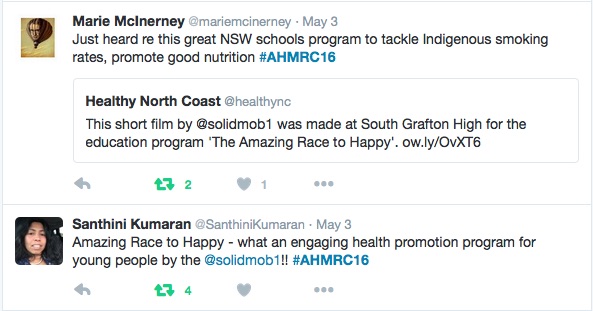 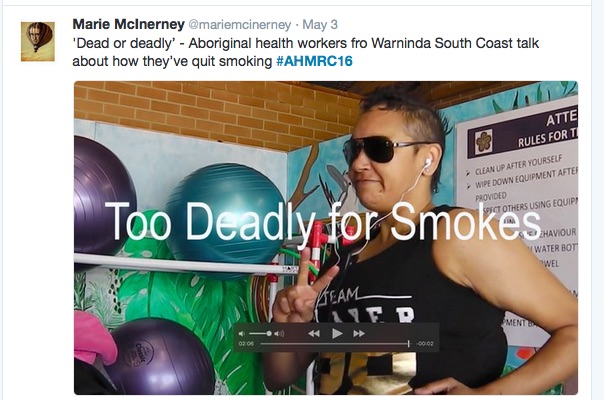 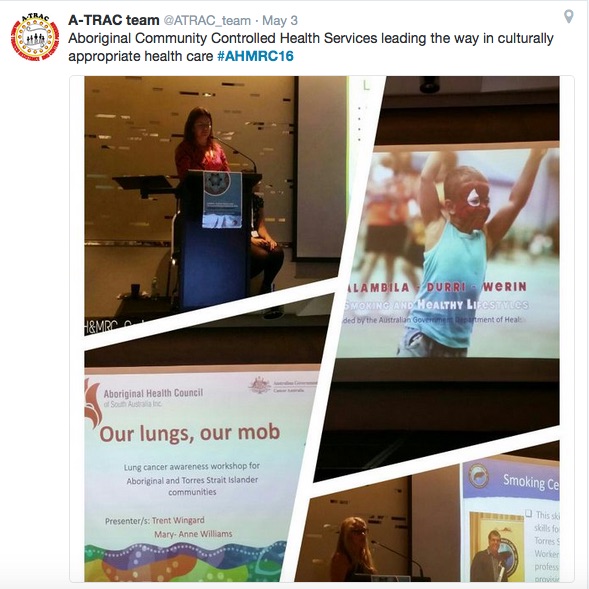 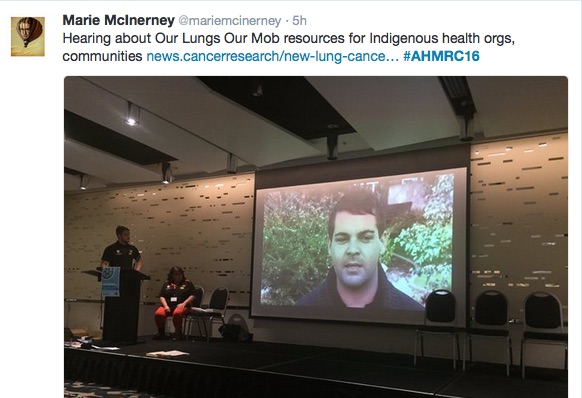 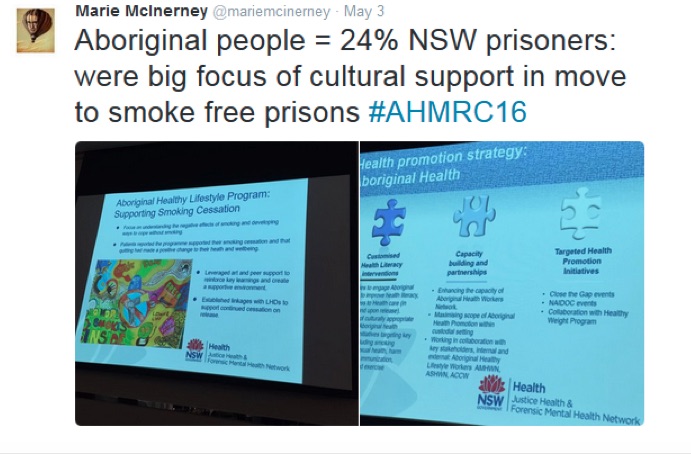 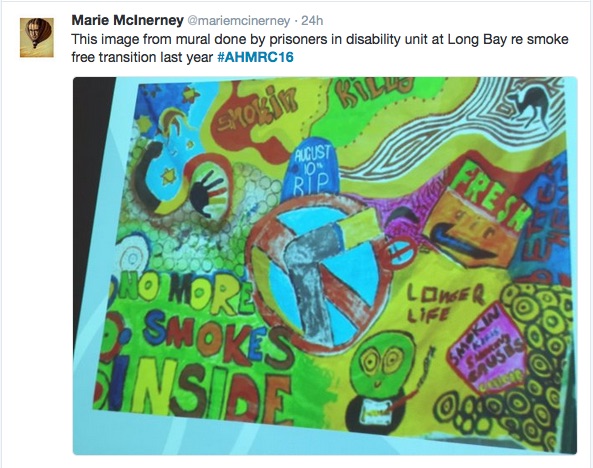 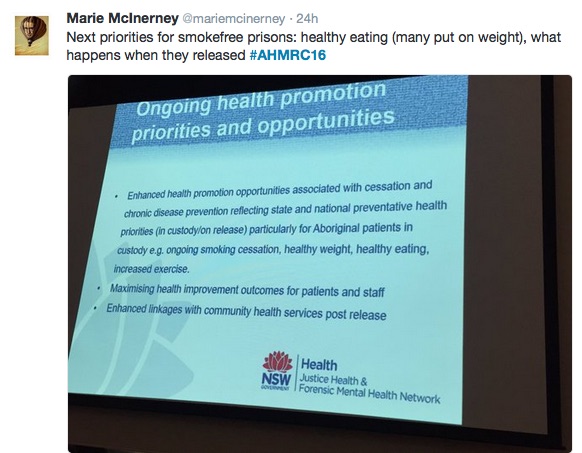 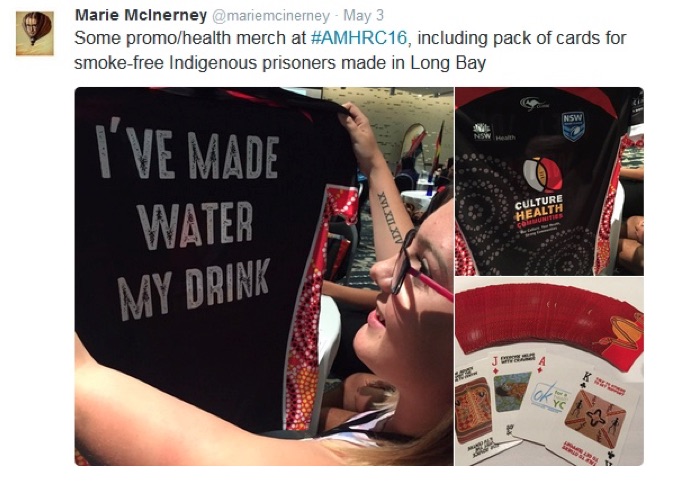 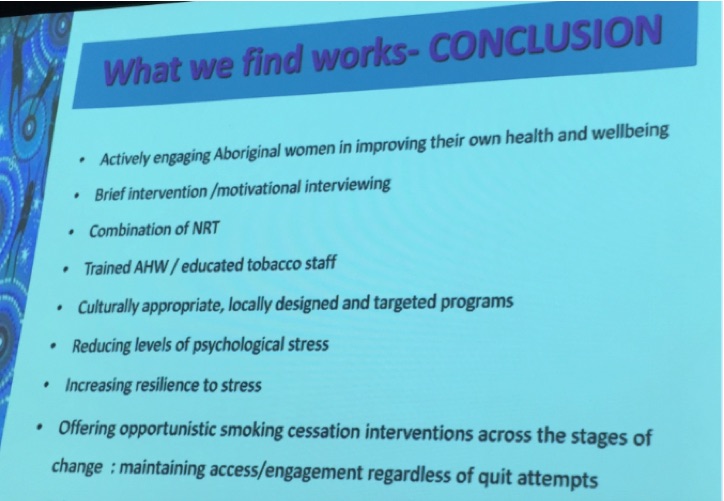 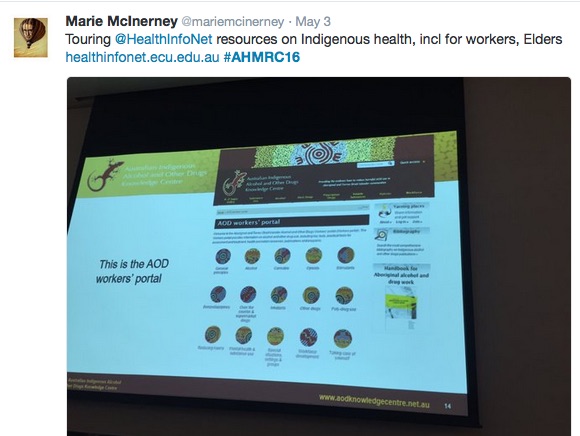 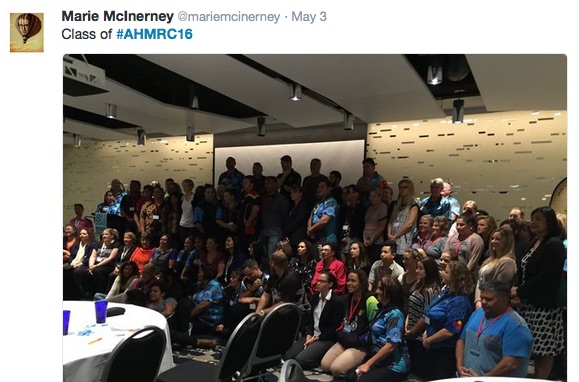 • Marie McInerney is covering the #AHMRC16 conference for the Croakey Conference News Service. Stay tuned for more reports, and bookmark this link to follow the coverage. On Twitter, check #AHMRC16.