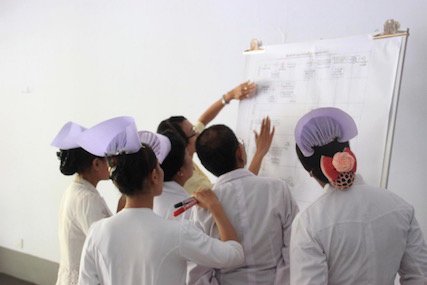 Using the data revolution to agitate for health policy

A themed edition of The Lancet, published today, marks the 20th anniversary of the Global Burden of Disease (GBD) study, and presents the findings for 2016.

Over the years, you will have seen much of the output of this study, which is the world’s largest scientific collaboration on population health, currently including data from more than 130 countries and territories.

The study tracks life expectancy and mortality, causes of death, overall disease burden, years lived with disability and risk factors that lead to health loss, allowing global and national health bodies to focus their efforts in the right directions.

But it can’t track data that is not collected.

In the post below, one of the founders of the GBD study, Laureate Professor Alan Lopez AC explains how innovative thinking and information technology, along with simple footwork, are filling the data gap in countries that have lacked the resources to collect health statistics.

It’s an exciting initiative that we know from experience, will ultimately lead to better policy, more accountability and improved health.

It’s 2017 and we’re amid a Data Revolution. Wearable technology tells us everything we’ve ever wished to know. In the age of data, we believe that the more information our fitness tracker gives us, the more we know about our health, and what we can do to improve it.

What if I told you that many nations around the world don’t have the population health data equivalent of fitness tracker? How can countries that lack basic data about births and deaths formulate plans for improvement?

The health data drought in low and middle-income countries.

Around half of deaths worldwide are uncounted (around 25 million each year). And of those that are counted, many don’t have a cause of death logged.

Many records do not provide medically accurate or specific information. Without this information, government officials, public health leaders and donors cannot make informed decisions on priorities, including how and where to direct public health resources.

To give you a real example of the repercussions of the lack of death data we have around the world, take Myanmar.

There are about 450,000 deaths that occur each year in Myanmar, but of these about 80 per cent occur outside urban areas and outside of medical facilities. Each year, 250,000 deaths are simply registered with little or no information on what caused or contributed to them.

Twenty-five years ago, Christopher Murray and I co-founded the Global Burden of Disease Study  – to provide the sort of evidence policy makers need to guide the way health dollars were spent.

The singular focus in global health spending for decades had been on infant and maternal death but, using the most comprehensive dataset worldwide to measure the world’s health problems, we argued that it was just as important to acknowledge that adults were dying prematurely in similar, if not greater, proportions to infants and their mothers.

Data told us this, and luckily governments took notice.

Now, governments such as the Australian Government can monitor the trends in previously ignored areas such as mental health and Aboriginal and Torres Strait Islander health, and use the data to inform their efforts to to reduce the burden of disease.

Twenty years later, I am still working to help countries improve their health data, and to agitate for policy change using innovative methods to collect data in some of the world’s hard-to-reach areas. And technology is now bridging the gap.

The Data for Health Initiative

Through the Bloomberg Philanthropies Data for Health Initiative I’m leading at the University of Melbourne, in partnership with other grantee organisations, we are using innovative technological interventions to bolster the civil registration and vital statistics (CRVS) systems in 20 middle-and-low income countries, to make over one billion people count.

This is important, because the availability and use of such data has seen a huge change in increasing the quality and length of human lives.

Counting deaths to save lives

With more accurate data, policymakers can develop an accurate roadmap, with which they can make sure their tax dollars are going to the health conditions that really need addressing.

The biggest misconception is that it’s too hard and can’t be done. The Bloomberg project is about countering that myth. That it actually can be done; we’ve developed new, more cost-effective measurement methods we’re starting to exploit.

Major research achievements in measuring population health coupled with Information Technology advances that are 1000 times faster than they were when I started in this field 30 years ago have huge potential to better target health dollars where they are needed.

We’re making use of these innovations, these methodological advances, packaging them, talking to countries, getting countries interested to see that this is possible, that they can benefit from these scientific and technological advances.

Our work includes providing technical assistance to increase the registration of births and deaths, and improve the quality of cause of death reporting in hospitals.

We also provide assistance with the use of verbal autopsy (see below) to better understand probable causes of death in communities, and produce high-quality datasets.

Along with these interventions, assistance is provided to improve data analysis skills for policy and program analysis.

A recent article tells the story of how the University of Melbourne’s Data for Health Initiative is training midwives in Myanmar to gather so-called ‘verbal autopsies’ on computer tablets.

Once collected, the information is fed into a laptop where pattern recognition software automatically generates a probable cause of death, all without the need for a doctor.

A verbal autopsy is when, instead of relying on a doctor’s examination of a body, the cause of death is determined by interviewing relatives about the deceased’s symptoms and lifestyle.

Verbal autopsies need less expertise than physical autopsies but, in the past, the results have still needed to be interpreted by a doctor, taking doctors away from their critical health care duties.

To bypass the need for a doctor, the University of Melbourne and the University of Washington developed software that allows the midwives to load the data they gather from household interviews directly into a program called SmartVA, which then generates a probable cause of death.

Suddenly in Myanmar, where midwives had been collecting and shipping around pieces of paper on births and deaths in communities, they are now conducting 20 minute interviews on tablets and then feeding the data back into laptops to get reliable cause of death data in real time for rural populations for whom no such information existed before.

Breaking through decades of inertia

In the Solomon Islands, the Data for Health Initiative has been rolling out training to improve the medical certification of deaths in hospitals and, in April, the country was able for the first time to report its leading cause of death.

It proved to be heart disease followed by diabetes. That was surprise to many people who thought diseases such as malaria, diarrhoea and pneumonia killed most people. They don’t.

We are trying to achieve bold changes in these countries and to break through decades of inertia with their data collection systems. This takes time.

The Data for Health Initiative enables us to keep going back to governments to provide the technical assistance we promised, to keep making the case, establishing trust, and encouraging them to make sustainable improvements.

* Alan Lopez AC is a Laureate Professor of Population and Global Health at the University of Melbourne. He is leader of the Data for Health Initiative.

*The work by the University of Melbourne on the Data for Health Initiative is funded by Bloomberg Philanthropies and the Australian Government’s Department of Foreign Affairs and Trade.

This piece was based on the story, How Death by Numbers Promotes Global Health, by Pursuit. Read the original article here https://pursuit.unimelb.edu.au/articles/how-death-by-numbers-promotes-global-health.

The Global Burden of Disease Study 2016 edition of The Lancet, much of which is open access, can be found here.

PrevPreviousFit for purpose: change is afoot in the accreditation of Australia’s health workforce
NextProfiling innovation and lived experience in mental health services – get your #TheMHS2017 conference report hereNext