Using the law to create healthier environments: recent developments from NYC to Victoria

New York City and its Mayor Michael Bloomberg are high on the list of those to watch when it comes to public health progress.

Mayor Bloomberg plans to ban the sales of large sized soft drinks and other sugary drinks at restaurants, movie theatres and street carts, according to The New York Times.

The proposed ban would affect the sales of popular sugary drinks found in delis, fast-food franchises and even sports arenas, from energy drinks to pre-sweetened iced teas. The sale of any cup or bottle of sweetened drink larger than 16 fluid ounces – about the size of a medium coffee, and smaller than a common soft drink bottle – would be banned under his plan (which is not a fait accompli).

The article quotes the NYC health commissioner, Dr Thomas Farley, blaming sweetened drinks for up to half of the increase in the city’s obesity rates over the last 30 years.

While the NYC announcement is big news, we haven’t heard as much as we should have about a new Victorian report which could also be seen as a public health trailblazer, says Jane Martin, executive manager of the Obesity Policy Coalition.

The report from an Inquiry into Environmental Design and Public Health in Victoria, was undertaken by the Legislative Council’s Environment and Planning References Committee, and emphasises the importance of considering health in the design of communities, such as:

• That the Victorian Government amends section 12 of the Planning and Environment Act 1987 to require planning authorities to conduct a Health Impact Assessment for key planning decisions, such as major urban developments or making or amending a planning scheme.

• That the Victorian Government works with VicHealth to commission further Victorian research into the cumulative health and wellbeing impacts of the density of fast food outlets on a community; assists local governments to map all food outlets within a local government area; develops a planning mechanism that can be used by local councils to limit the oversupply of fast food outlets in communities; and develops a plan to facilitate the supply of healthy food choices to Victorians. 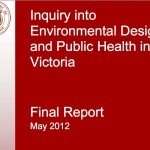 In stark contrast to the media flurry around the Darebin City Council’s proposal to use a differential rates’ system to attempt to dissuade fast food outlets from the City, an excellent report on environmental design and public health in Victoria was released last week with relatively little fanfare.

The result of a year-long Parliamentary Inquiry including public submissions and hearings, the report makes 36 recommendations, with an important first step to embed considerations of health and wellbeing throughout the planning system’s legislative and policy framework.

The timing for the report couldn’t be better with a new planning strategy for metro Melbourne and a review of the Planning and Environment Act currently underway.

This provides a real opportunity for some of the recommendations to be taken up.

It is widely recognized that planning and its influence on the environment in which people live, work, learn, play and shop can either support or undermine healthy and active lifestyles.

For example, difficulties accessing healthy food, increased availability of unhealthy foods (in particular processed and fast foods) and loss of agricultural land to urban development are all factors known to contribute to the consumption of unhealthy food.

Increased reliance on motor vehicles, lack of safe, well lit and well-connected walking and cycling paths and a lack of public transport options are all well-known contributors to inadequate levels of physical activity among children and
adults.

The report contains a range of recommendations particularly around fast food outlets such as:

There is international evidence that greater fast food outlet density may be associated with an increased risk of overweight and obesity, including among children and particularly within disadvantaged communities.

Currently it is difficult for community members and local councils (such as Darebin) to rely on zoning restrictions and planning schemes to oppose development and placement of new chain fast food outlets.

Limited grounds currently exist to oppose their development on the basis of concerns about overweight, obesity and chronic disease within the community.

Further, councils can also be reluctant to pursue their concerns at the Victorian Civil and Administrative Tribunal given the extensive resources available to large fast food companies to fight these matters.

The recommendations in this report are great news, particularly for those local councils who are now being funded by state and commonwealth governments to decrease obesity rates in their municipality.

Now it the onus sits with the state government to give these councils the ability to influence one of the major drivers of unhealthy eating in their communities.