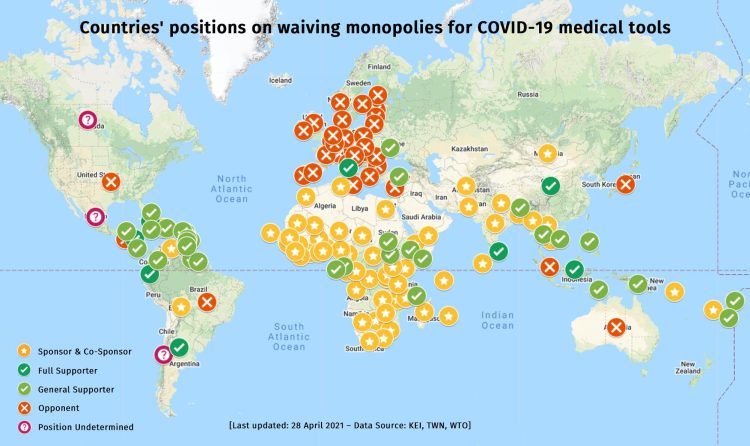 Vaccine inequity across the globe: “Our racism is dangerous for our own health, too”

Introduction by Croakey: Healthcare workers across the globe are being urged today by Public Services International, Amnesty International and the People’s Health Movement to join a global call on nations to support a temporary TRIPS waiver proposal, a relaxation of intellectual property laws to allow more manufacturers to produce COVID-19 vaccines and medicines.

The COVID-19 waiver is supported by the World Health Organization, UN Human Rights Experts, UNITAID and UNAIDS, and many nations (see feature image above), though not yet key countries like the United Kingdom and United States, nor Australia, despite much urging from the Public Health Association of Australia (PHAA) and others here.

The refusal of many of the world’s richer countries to support the #TRIPSwaiver is “with no exaggeration, the biggest scandal of our time”, according to Andrew Stroehlein, European Media Director of Human Rights Watch in a Twitter thread which is republished below with his permission.

Stroehlein says you can’t look at the map of which countries are opposing the waiver without seeing “an ugly, familiar pattern”.

What many people living in the richer countries don’t seem to realise, he says, is that “their own dismissive attitude toward the rights and needs of those living in poorer countries is actually self-destructive. In short, our racism is dangerous for our own health, too,” he tweeted.

La Trobe University Public Health Associate Professor Dr Deborah Gleeson, Co-convener of the PHAA’s Political Economy of Health Special Interest Group, said she believed the TRIPS waiver is being discussed at the World Trade Organization General Council again this week. She said a reliable source had reported that a revised waiver proposal is expected to be discussed later in May, ahead of a formal TRIPS Council meeting in June.

Croakey has reported extensively on the importance of global vaccine equity and the need to share vaccine knowledge and expand global capacity for vaccine production, including this  backgrounder from Gleeson and colleagues.

In a recent article at BMJ, leading UK health experts, Professor Maggie Rae, president of the Faculty of Public Health and Professor Helen Stokes-Lampard, chair of the Academy of Medical Royal Colleges, also urge UK action to support the rapid development of the manufacturing capacity of trusted vaccine producers in developing countries. 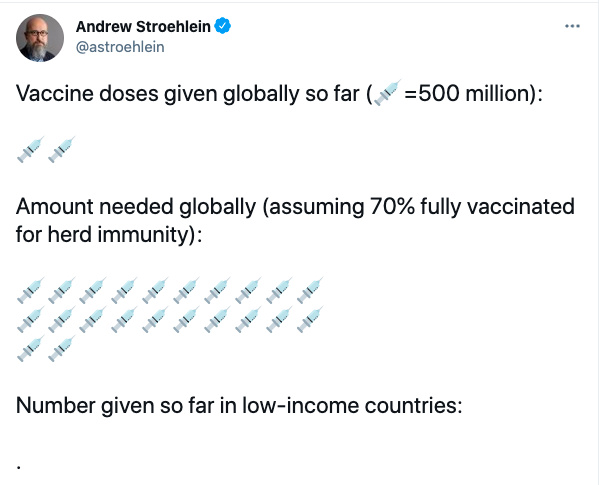 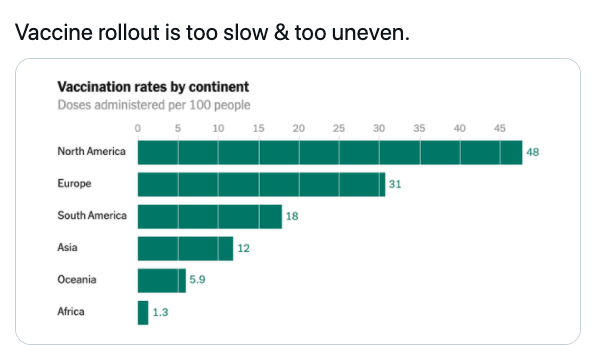 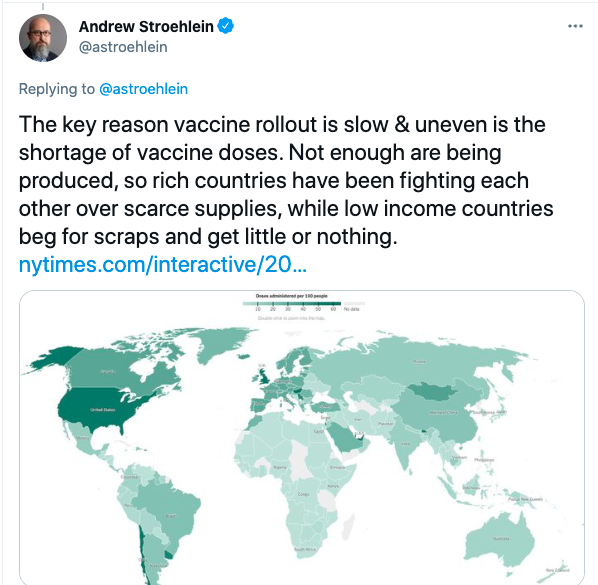 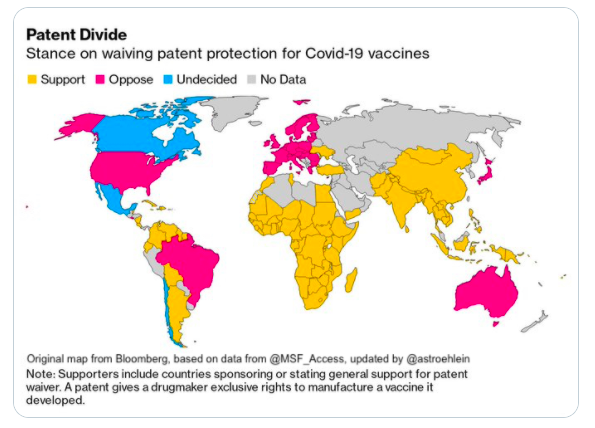 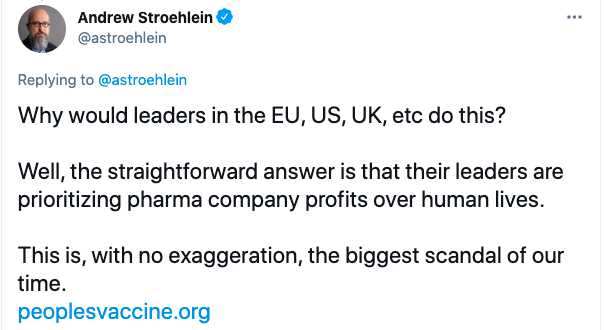 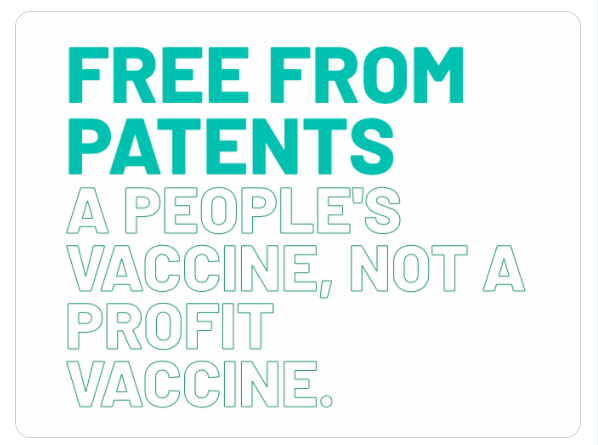 There’s also something darker going on, too, I suspect… A “first world” attitude that disregards the rights of people in other countries… A deeply engrained pathway in the brains of many in the EU, US, UK, etc… A mental conditioning that says those other lives don’t matter…

Call it the lifetime brainwashing of racism & white supremacy we all get… Call it the long colonial hangover… But whatever you call it, you can’t look at this map and – despite a few exceptions – not see an ugly, familiar pattern… 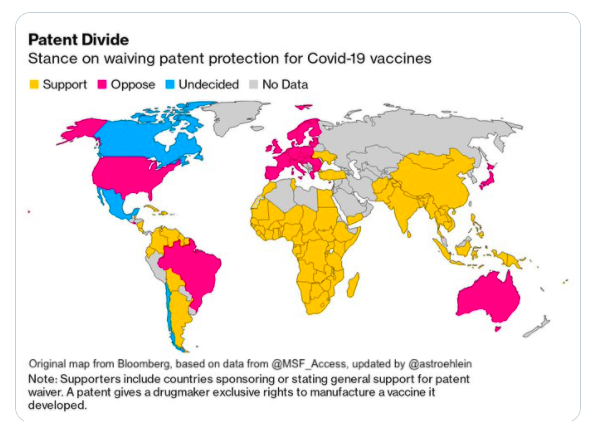 Some see the problem but think that the only solution is charity – again, it’s a well-worn mental pathway when those in rich countries think about solutions for low-income countries…

Rich governments are donating money to COVAX, a global vaccine procurement facility. But while COVAX may help get 20% of some poorer countries’ doses, that’s not nearly herd immunity level, which is 70% at least. And rich countries use COVAX as an excuse to do nothing further.

The idea that you can throw money at a problem when that problem is scarcity… that’s madness. The monopoly position of pharma companies – supported by the rich governments – means that vaccine production is limited to whatever the companies want it to be.

Remember, a business aims to maximize profits, not production necessarily.

So, the rich governments are helping the pharma companies boost their profits, enhancing scarcity. Great for the pharma companies. Terrible for global public health. And they get away with it in part because people have been conditioned not to care about certain others.

And what many people living in the richer countries don’t seem to realize is that their own dismissive attitude toward the rights and needs of those living in poorer countries is actually self-destructive. In short, our racism is dangerous for our own health, too.

Even if you can somehow disregard the suffering & death of others, and even if you think continued economic disruption won’t affect you… In prolonging the pandemic by blocking wider vaccine production globally, rich governments are endangering us all – everywhere. You too.

Prolonging the pandemic means giving more chances for new variants of the virus to emerge that are: more deadly, more virulent, and/or resistant to the current vaccines.

This affects everyone. Even those already vaccinated. 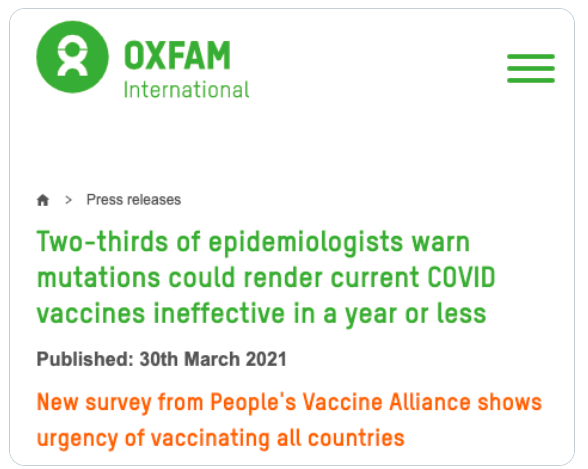 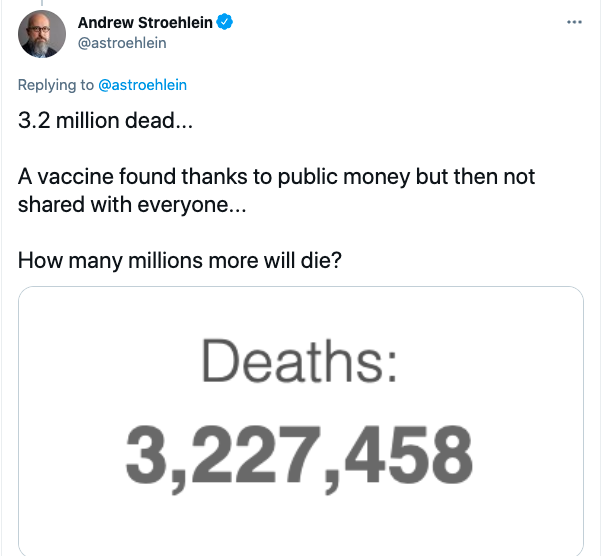 The death toll will mount ever higher due to those who seek to profit on suffering & their powerful allies in rich governments.

But it’s also due in part to deep, long-standing prejudices that keep people locked in national & racist mindsets, so that they cannot even comprehend that the phrase, “no one is safe until everyone is safe”, in actual fact includes them, too.

(Editor’s note: The feature image first published with this story was replaced following advice that Canada, marked in the original map as opposing the TRIPS waiver, is yet to come to a decision)

PrevPreviousMale voices dominate the news. Here’s how journalists and female experts can turn this around
NextHealth and medical leaders urge the Prime Minister to act on climate crisisNext