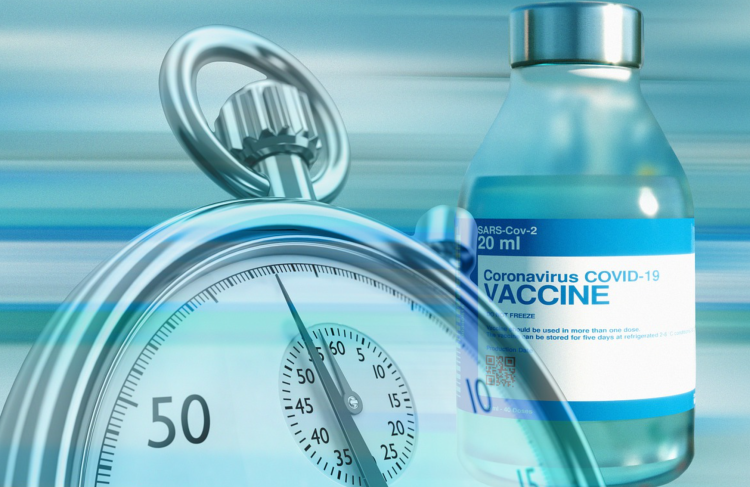 The government’s credibility is in the spotlight after the Prime Minister’s announcement that changes are being made to the COVID-19 vaccine rollout, based on advice from the Australian Technical Advisory Group on Immunisation.

Coming on the back of ongoing delays in the rollout, this change of advice was generally seen as damaging public trust in the vaccine program and undermining the political gains made by the government based on Australia’s (relative) success in controlling the spread of COVID-19. 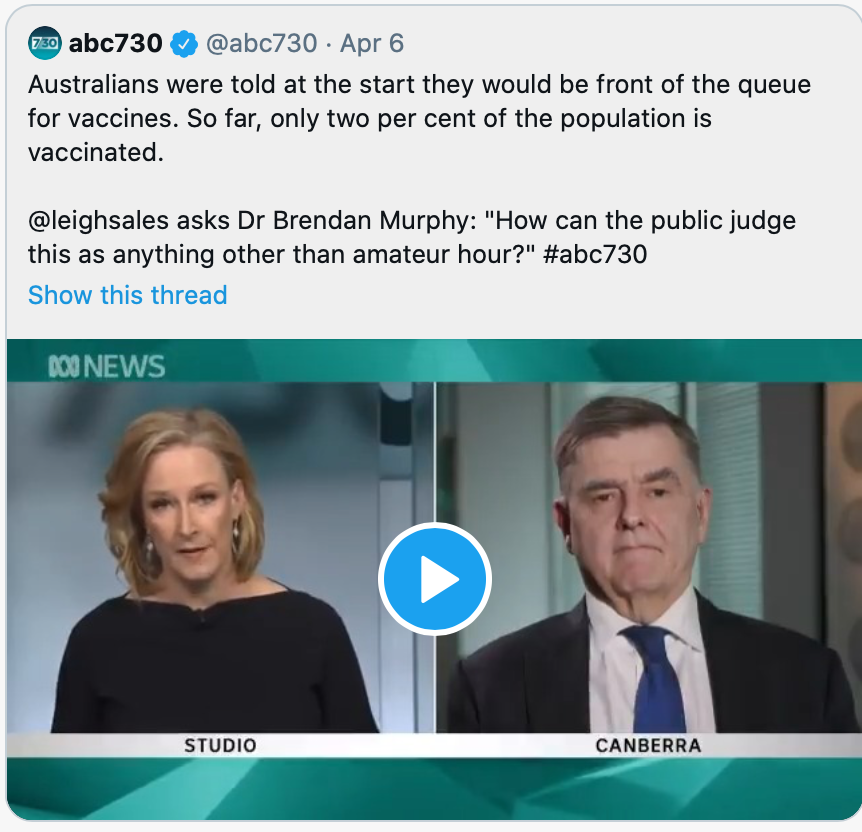 Commentators and advocates also raised some broader implications of the changed advice including the impact of delays in the rollout for Australian workers, general practice and vulnerable communities.

Below Croakey editor Jennifer Doggett summarises health sector and community reactions to the announcement and highlights some key challenges for the government in moving forward.

Disappointment was evident in reactions from people who had been holding out for the vaccine to make long awaited visits to family and friends.

Cynicism about the government’s ability to effectively manage the rollout was also a common reaction, highlighting the repair work that the government needs to do to rebuild the trust it needs to successfully deliver this important public health program.

Unsurprisingly, Labor seized the opportunity to highlight the problems with the program, targeting the Prime Minister in an attempt to gain traction for the negative “Scotty from marketing” image promoted by his critics.

However, some people speculated that the decision could add to the government’s credibility in reinforcing its commitment to acting on expert medical advice.

Ongoing problems with federal government press conferences on COVID-19  were highlighted in reactions in social media, including difficulties in hearing questions from journalists, a lack of easy read information and inadequate sign language interpretation which made this important communication inaccessible to the Deaf community. 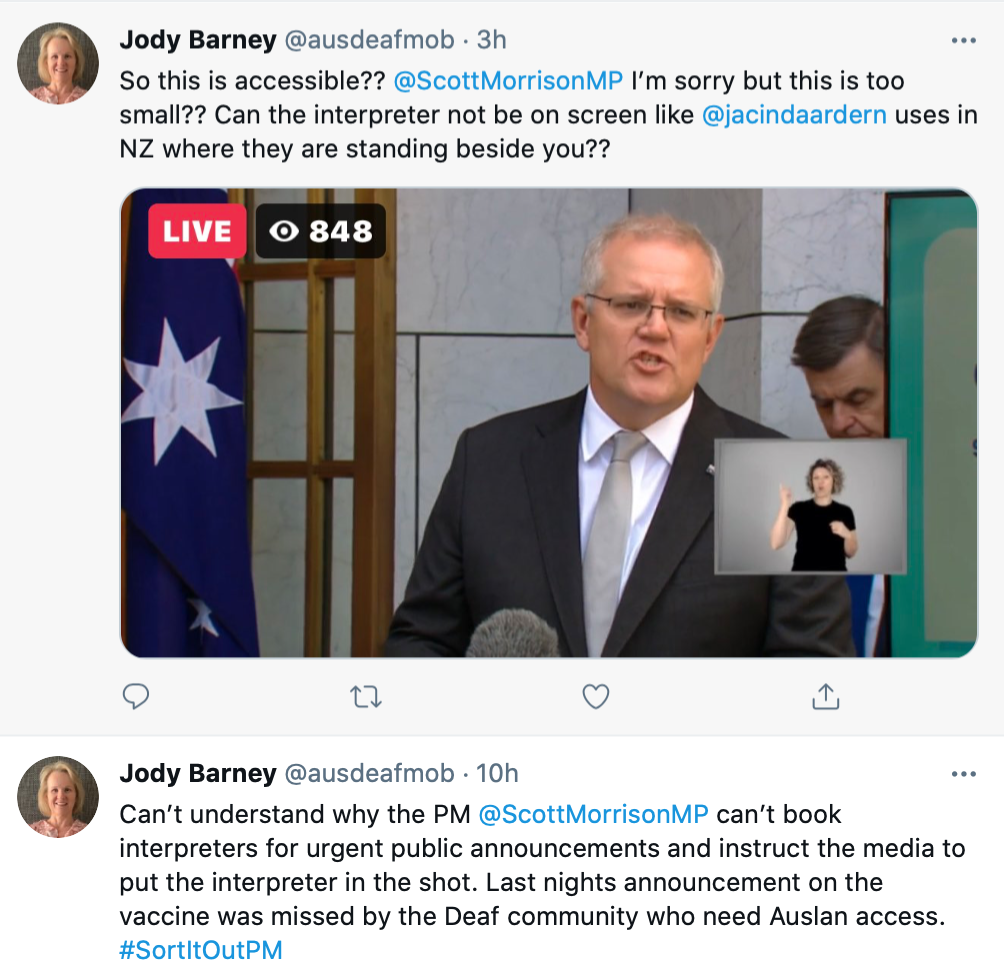 On the plus side, advocate for homebound and bedridden people Ricky Buchanan, welcomed the information from the government for providers on how to provide vaccine services to those unable to attend clinics. 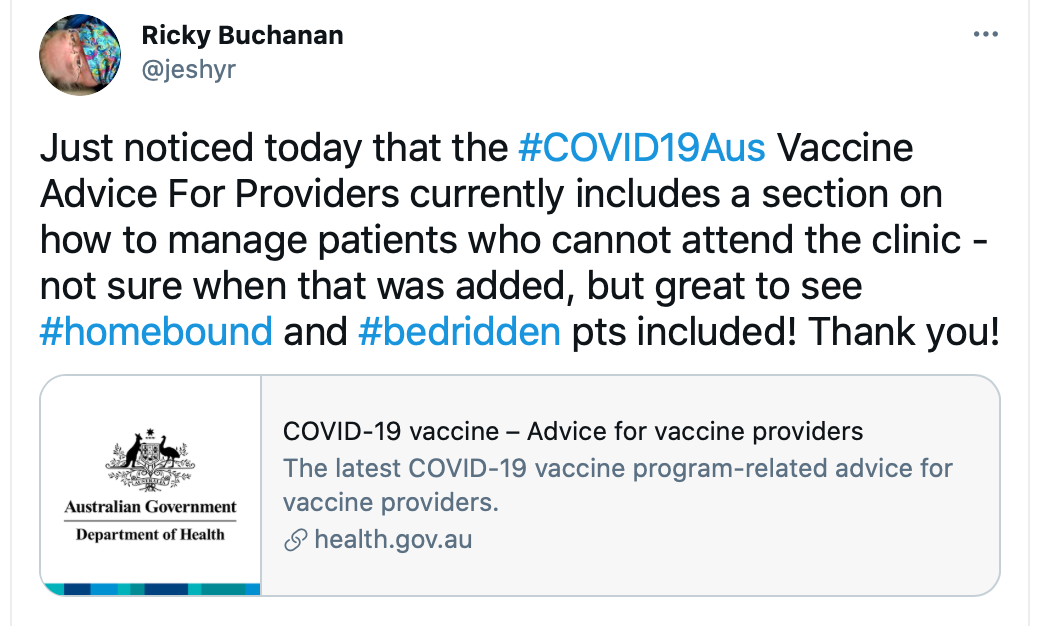 Questions were raised about the implications for the vaccine program for Aboriginal and Torres Strait Islander communities.   Given the poorer health status (on average) of Aboriginal and Torres Strait Islander Australians and the proximity of many Indigenous communities to Papua New Guinea, it is critical that this issue is resolved to ensure the work being done by Aboriginal Community Controlled Health Organisations to roll out the vaccine continues. 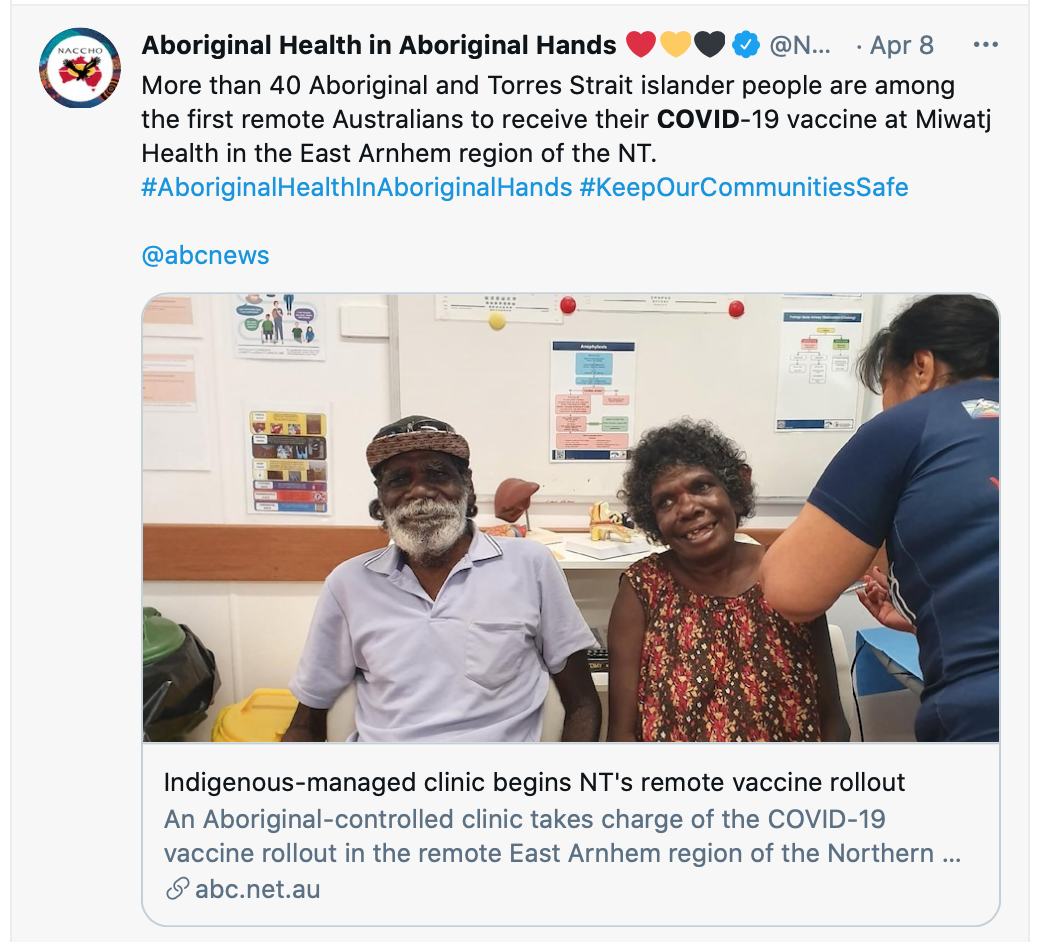 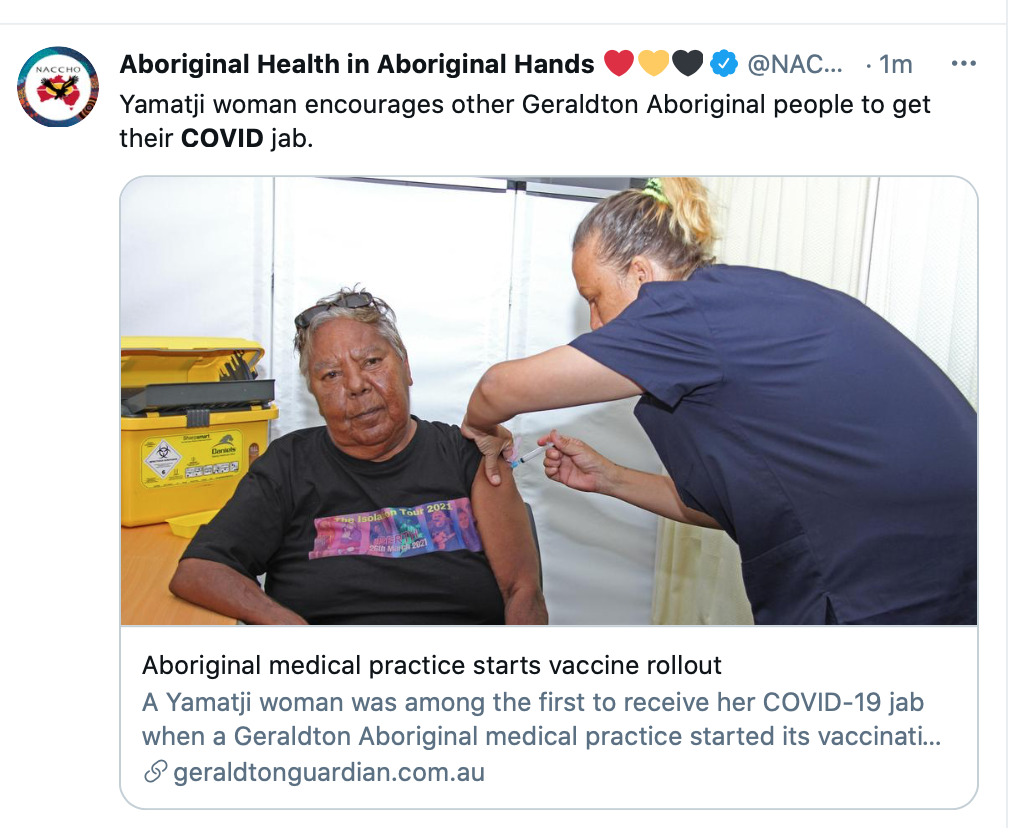 Delays in the rollout of the vaccine program also prompted calls for the restoration of the JobKeeper payments to ensure businesses affected by the pandemic can continue to pay workers.

The role of general practice in the vaccine program was already fraught and this announcement has added to these problems, with media reports that GPs are “being inundated with calls from confused patients….and grappling with the prospect of far longer consult times for each vaccination.”

In addition to the challenges practices face in dealing with vaccine issues, commentators noted that this additional burden is likely to make it more difficult for already over-burdened GPs to provide routine care to their patients. Concerns were also raised about the long term impact on GPs’ engagement in government programs. 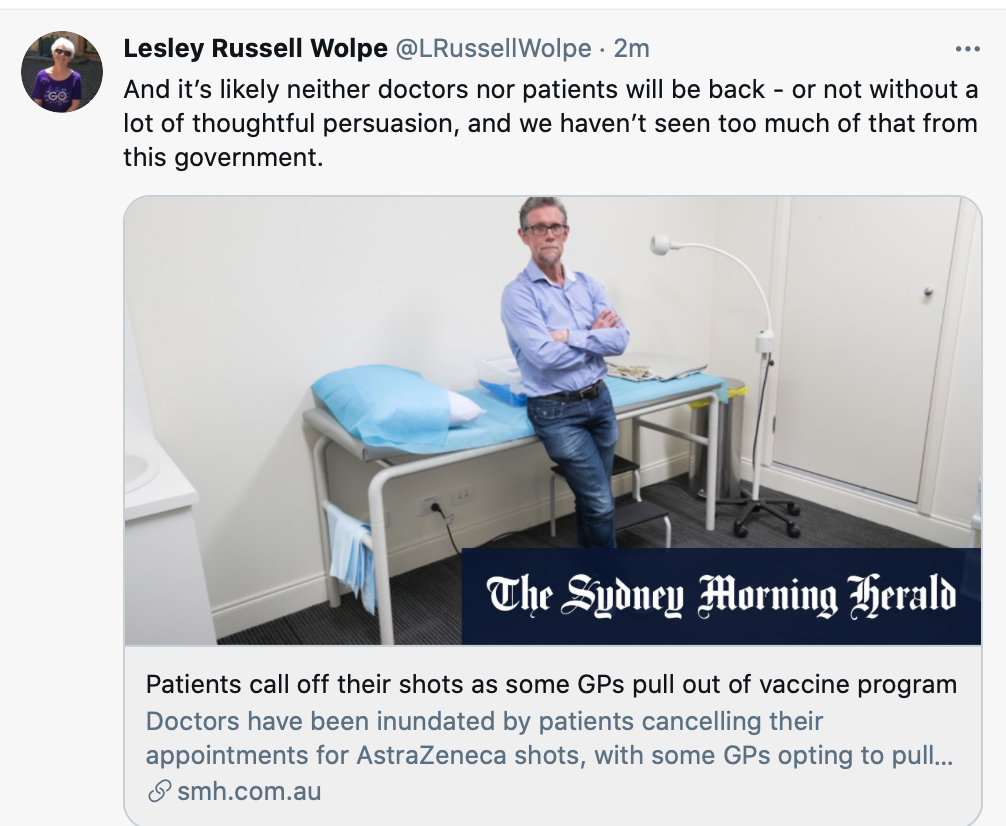 The complexity of risk communication and the need for the government to seek expert advice to help restore public confidence in the vaccine program was also raised by a number of commentators.

Writing in The Conversation, Adrian Esterman, Professor of Biostatistics and Epidemiology at the University of South Australia, highlighted the need for the government to “reinstate confidence” among people over 50 that the AstraZeneca vaccine is safe.  He argued that this will require “a major effort using Australia’s best marketing brains.”

Some useful examples of clear risk communication were shared on social media, including graphics illustrating the risk-benefit equations for different age groups. 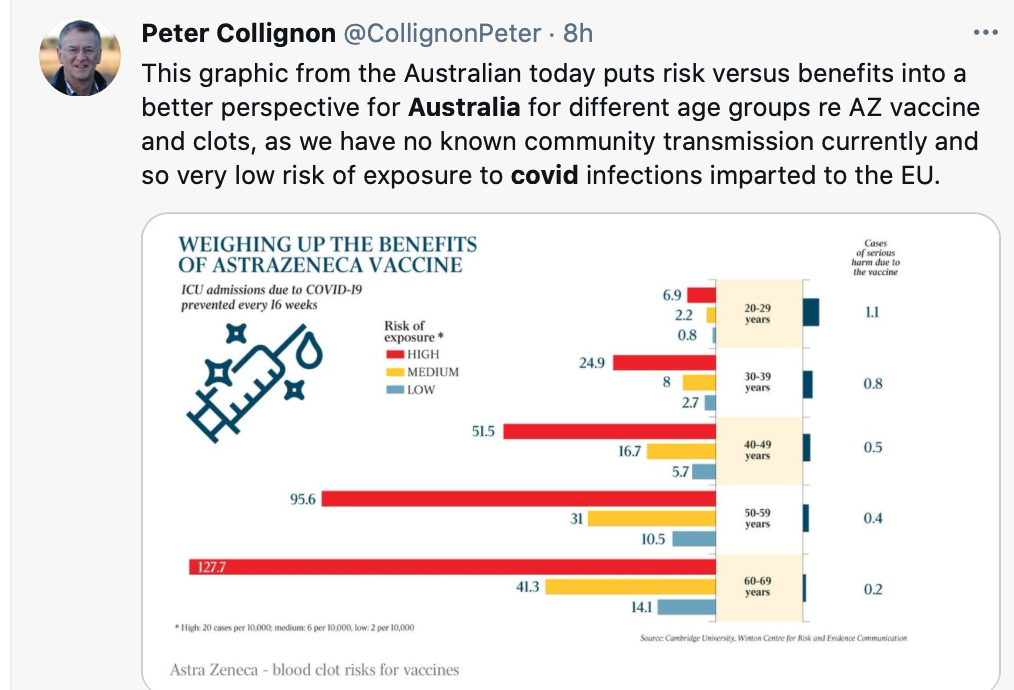 Comparisons were made between the communications from the Australian government with those in the UK and New Zealand with Australia’s falling short on transparency and detail. 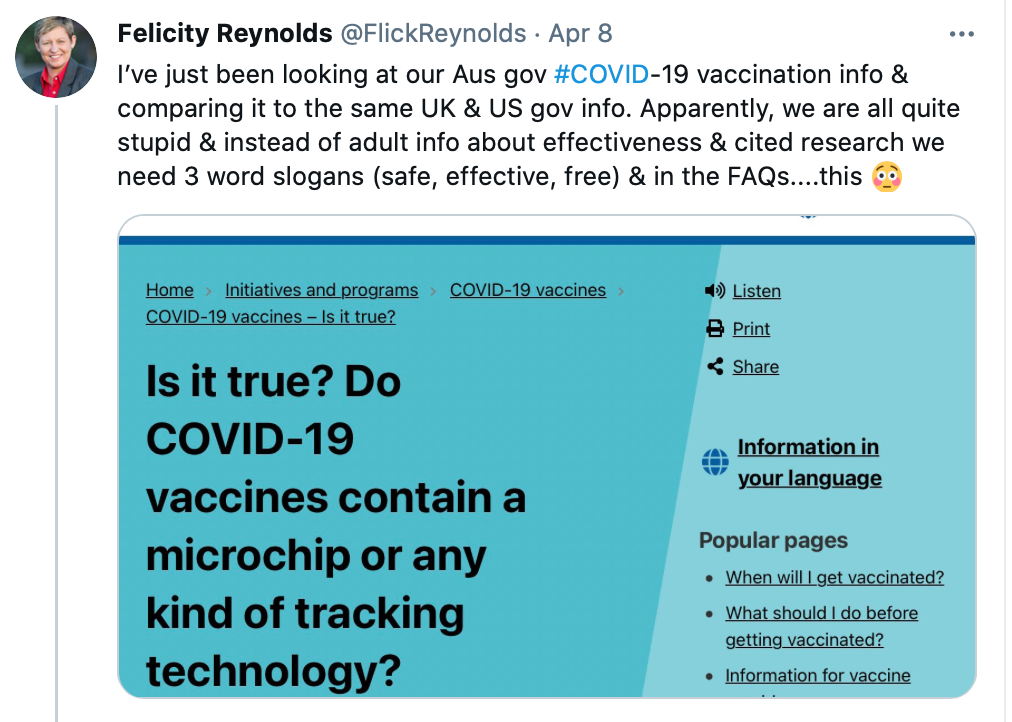 Some experts were more sympathetic to the challenges facing the government, including vaccine communication specialist Professor Julie Leask who highlighted the complexity of the issues involved in this decision.

Dr Marco Giuseppin, Chair AMA Council of Rural Doctors, highlighted the impact of the announcement on rural doctors and communities. He challenged the conception in the mainstream media that COVID 19 is predominantly a “disease of cities”, describing the impacts of the pandemic on rural Australia as “profound”.

Dr Guiseppin described the vaccine program as “ultimately controlled by a small number of senior people (clinical and non clinical) in our major cities” and argued that a city-centred approach will lead to a “two tier” system where “vulnerable populations in major cities will likely have access to a vaccine candidate far earlier than those in rural areas.”

He also described how these issues have been raised previously by rural doctors but have been brushed off by their “metrocentric leadership”.

The announcement of the planned travel bubble between Australia and New Zealand prompted suggestions for some trans-Tasman “vaccine tourism”, highlighting again how much Australia can learn from our Kiwi neighbours.

Declaration: Jennifer Doggett provides consultancy services to a range of organisations in the health sector, including providers of physiotherapy, medical technology, nursing, medical education and training and medical services, including the current COVID-19 vaccine program.

For more of Croakey’s reporting on COVID see the archives of our COVID wrap, prepared by public health researcher Alison Barrett.

PrevPreviousOn COVID vaccination, weighing up risks and benefits, and clear communications
NextBack to the Fire: the Congress of Aboriginal and Torres Strait Islander Nurses and MidwivesNext