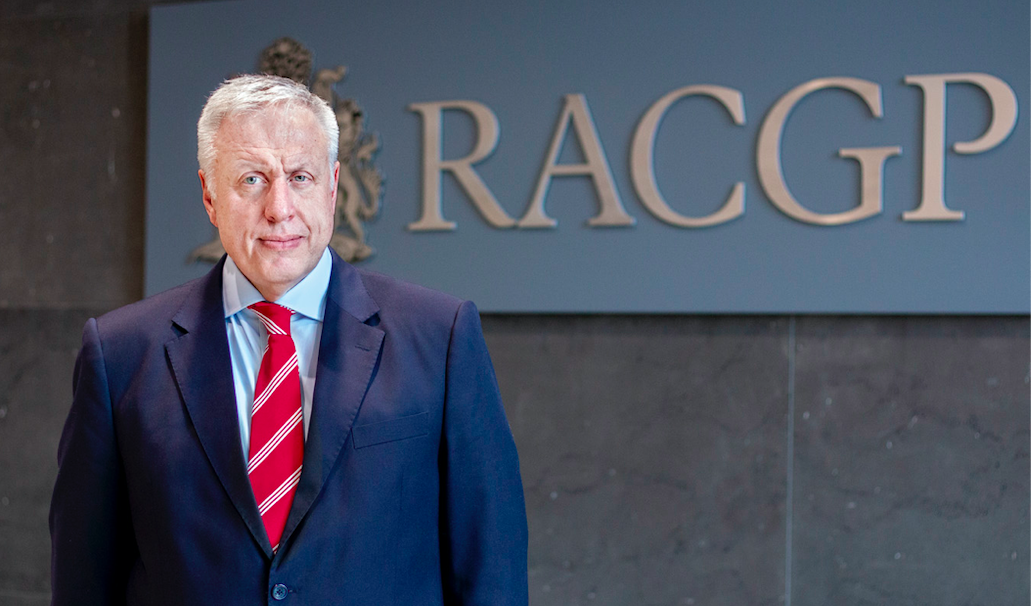 “Dr Nespolon was a giant of general practice,” the RACGP said in a statement.

“We have lost a great friend, advocate and mentor, who worked tirelessly to advocate on behalf of the profession of general practice and Australia’s 41,000 GPs,” it said, leading a wave of tributes from politicians, peers and media. 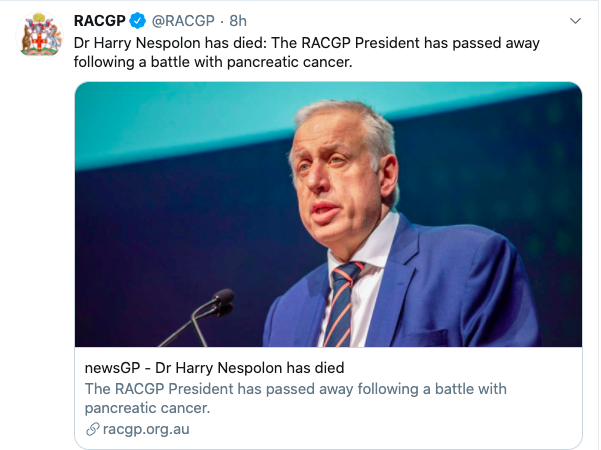 Those who had worked with him in multiple ways honoured his passion and dedication, right up to his death, particularly through two of Australia’s biggest emergencies – the 2019-20 bushfires and the ongoing coronavirus pandemic.

Nespolon, a Sydney-based GP and practice owner who was elected RACGP President in July 2018, played a critical part in the roll out of telehealth across Australia in the pandemic and the doubling the bulk-billing incentive for GPs.

Many, including Australian Medical Association President Dr Tony Bartone, noted that Nespolon had kept working “full pace” on behalf of GPs, even during the final stages of his illness.

“Harry was a great defender of General Practice,” Bartone said. “He stood up for doctors…He simply was passionate about his patients and their care.”

RACGP board chair Christine Nixon said the Board was “in awe of everything Harry has been able to achieve, particularly over the last seven months”.

Health Minister Greg Hunt also extended his deepest condolences, on behalf of the Australian Government, saying Nespolon  was “a passionate but also reasoned advocate for GPs and, above all, for their patients— the Australian people.”

“His tenure as president coincided with a period of reform and then, of emergency—both the bushfire emergency and more recently the ongoing COVID-19 pandemic.”

“Throughout these challenges, and his own personal battle with cancer over the past nine months, he remained tireless, eloquent and cogent in his leadership and drive for positive change.” 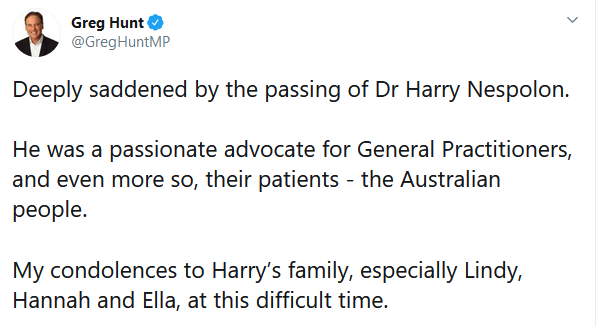 Hunt said Nespolon had played a critical role in health responses during the pandemic, including dozens of new telehealth measures under Medicare and incentives for GPs to keep their practices open for patients who required face to face consultations.

“These measures allowed Australians to continue receiving vital health care, while keeping doctors and patients safe. They were a critical element in Australia’s very successful national response to the coronavirus threat,” he said.

Opposition health spokesman Chris Bowen said Labor was “deeply saddened” by Nespolon’s death, who had been a “fierce advocate” for Australia’s GPs over a long career.

“He continued to fight for better health for all Australians as recently as last week,” Bowen said.

Nespolon’s death was a great loss to his medical colleagues but also to all Australians seeking to make Australia’s health system even better, the Consumers Health Forum of Australia CEO Leanne Well said.

“We deeply appreciated his support for jointly working with CHF in areas including primary health reform and in supporting CHF on issues that matter to consumers like social prescribing,” she said.

Detailing his many contributions, the RACGP said Nespolon had worked as an RACGP examiner and was a representative on the Code of Conduct Committee for Medicines Australia for more than 10 years.

But it said his ambitions were not limited to medicine. While still practising as a GP, he completed a Master of Business Administration (MBA), a Bachelor of Economics and Bachelor of Laws (Honours) and a Master of Health Law.

“As RACGP President, a partner, a father to two children and a GP, he leaves a lasting legacy,” it said.

“Spirited, sharp-minded and indefatigable to the very end, Dr Nespolon will not be forgotten by those who worked alongside him.” it said 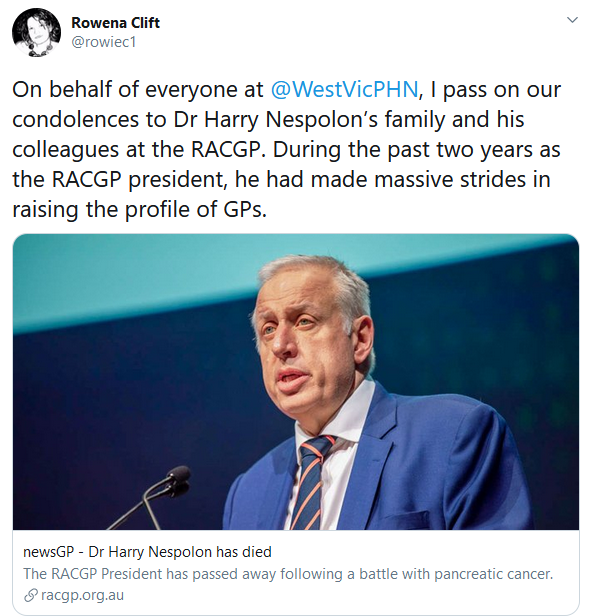 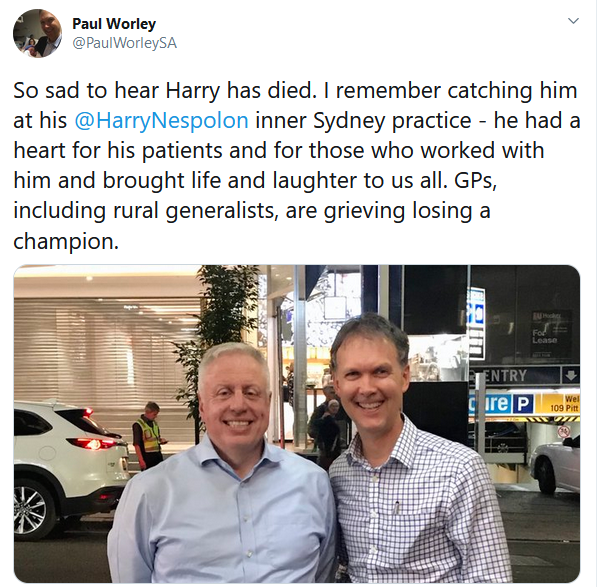 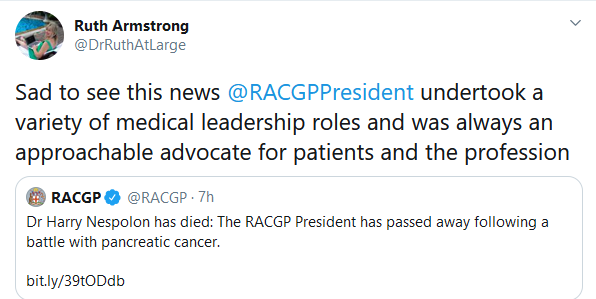 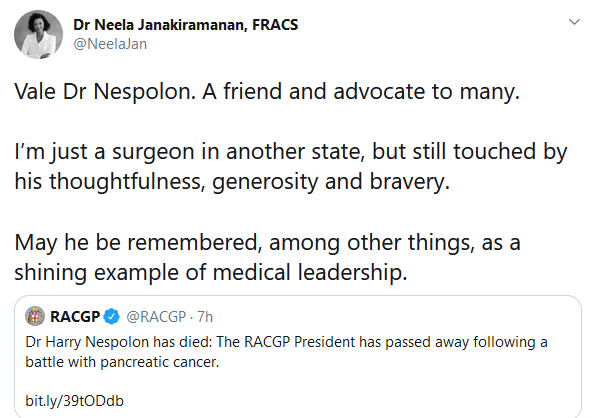