Profound tributes have flowed today following news of the death of Kirby Institute Director Professor David Cooper, who was recognised globally for his pioneering research work in HIV/AIDS and as a passionate LGBTI health advocate.

Cooper’s death was announced by the Kirby Institute, which said he died on Sunday afternoon after a short illness and that it was “devastated to lose him”. It said:

“David was among the first responders when the HIV epidemic reached Australia in the 1980s, and has been pivotal in the ongoing fight against HIV. David was an internationally renowned leader, initiating ground-breaking, collaborative infectious disease research that has saved countless lives in Australia, and globally.”

See its full statement below, which outlines his many achievements, or read more about his work here.

Cooper’s close friend, the Hon. Michael Kirby, in whose honour the Kirby Institute is named, also said in the statement:

“David’s special gift was having both a huge intellect and a huge heart. It was his intellect that made him a leader in the global response to the AIDS epidemic and led to the building of the Kirby Institute.

But it was his great heart that all who knew him, his family, his colleagues and his patients, could witness every day. He was first a clinician, and that made him a great scientist. We will miss him terribly and be all too aware of his absence.”

Among many others to mourn his loss on Twitter, Brendan Crabb, Director & CEO of the Burnet Institute said Cooper’s death was “devastating news, most especially to the individuals and communities that were the focus of David’s work. He said:

“So many once highly vulnerable people are alive, live healthily and are empowered because of David. While he leaves an incredible and enduring legacy, his loss is immense.

See more tributes below. The Kirby Institute is collecting messages, stories, memories and photos about the life of Professor Cooper. It asks that if you have something to share, please send it to lbamford@kirby.unsw.edu.au.

Croakey will continue to add to this post, as more tributes flow from around the world.

Statement from the Kirby Institute

The Kirby Institute at UNSW Sydney is mourning the loss of our Director, Scientia Professor David Cooper, who passed away on Sunday afternoon after a short illness.

David’s life was dedicated to the prevention, treatment and cure of HIV and other infectious diseases. These diseases disproportionately affect the world’s most disadvantaged communities, and David firmly advocated health as a fundamental human right in all of his endeavours.

His leadership as a clinician and researcher was extraordinary, and it is difficult to imagine our many collaborative efforts without David at the helm.

David was our inaugural Director at the establishment, in 1986, of the research centre that ultimately became the Kirby Institute, so he has served as Director for the entirety of our history.

David was among the first responders when the HIV epidemic reached Australia in the 1980s, and has been pivotal in the ongoing fight against HIV.

“David’s special gift was having both a huge intellect and a huge heart. It was his intellect that made him a leader in the global response to the AIDS epidemic and led to the building of the Kirby Institute. But it was his great heart that all who knew him, his family, his colleagues and his patients, could witness every day. He was first a clinician, and that made him a great scientist,” said The Hon. Michael Kirby, who was a close friend of David, and in whose honour our Institute is named.

“We will miss him terribly and be all too aware of his absence.”

David’s record of clinical and academic achievement is unparalleled. In the mid-1980s, his research led to the first description of the seroconversion illness which accompanies initial HIV infection in many people. He then proceeded to take a leading role in most of the key trials that ultimately led to the optimal use of life-saving combination treatments that are now widely available to people with HIV all over the world.

In 2003, he was made Officer in the General Division of the Order of Australia (AO) for “service to medicine as a clinician, researcher and leading contributor in the field of HIV/AIDS research and to the development of new treatment approaches.”

David was working right up to the time of his illness, running large-scale international clinical trials to improve HIV treatment, building research capacity in Indonesia and Myanmar, and leading the trial of pre-exposure prophylaxis to eliminate HIV transmission in New South Wales.

Under David’s leadership, the Kirby Institute grew from a national centre with a handful of staff formed to respond to the emerging HIV crisis, into what is now a globally renowned research institute with more than 300 staff and students, working at the forefront of the latest discoveries and innovations in HIV, viral hepatitis and sexually transmissible infections.

Our Institute is David’s legacy, and while we are devastated to lose him, we carry on his work with immense dedication, honour and pride.

Though he was humble about his scientific achievements, David spoke with the greatest pride about his family. His wife Dorrie and their daughters Becky and Ilana were as unfailingly supportive of his work as he was of them. To them we extend our deepest condolences.

Vale David. Our Director, our mentor, our friend.

The Board and staff of ACON, NSW’s leading HIV prevention, support and LGBTI health organisation, mourn the passing of one of Australia’s pioneering researchers into HIV/AIDS, and passionate LGBTI health advocate, Scientia Professor David Cooper AO.

Credited with diagnosing some of the first cases of HIV in Australia and being one of the architects for Australia’s response to the epidemic – that would later become a world-leading response – Professor Cooper was appointed the inaugural director of the Kirby Institute, or the National Centre in HIV Epidemiology and Clinical Research as it was then known, in 1986.

Throughout its history and due in large part to the leadership demonstrated by Professor Cooper, the Kirby Institute spearheaded research into HIV and contributed invaluable information towards a complete transformation of the virus. This shift saw the diagnosis for people living with HIV from that of a near certain death sentence, to a chronic manageable condition which can be treated with one pill a day.

Ever since its establishment in 1985, ACON has had an extremely close relationship with Professor Kirby and all the staff at the Kirby Institute; working in collaboration towards shared goals of zero transmissions and effective support and treatment for people living with HIV in NSW.

Led by Professor Cooper and the Kirby Institute, most recently this relationship has seen overwhelmingly successful implementation of EPIC-NSW, the world’s largest – and world-leading – clinical trial of pre-exposure prophylaxis, a daily pill that prevents the transmission of HIV, which now has over 9,000 people enrolled in NSW.

ACON President Dr Justin Koonin said that the loss of such a giant will indelibly leave its mark on the Australian and international HIV/AIDS landscape.

“David’s contribution to the health and wellbeing of people affected by HIV and LGBTI people has been immeasurable. We have all benefitted from his uncompromising principles and integrity, his passion, his fierce intelligence and intellect, his pioneering spirit and his compassion,” Dr Koonin said.

“From only being able to offer compassionate palliative care to gay men succumbing to AIDS-related illnesses in his ward at St Vincent’s Hospital, to spearheading research showing that HIV treatment leading to an undetectable viral load prevents HIV transmission, David’s lifelong dedication to people living with HIV and broader LGBTI health and wellbeing has improved countless lives of people in Australia and around the world.

“ACON has been privileged to share a close working relationship with David as the head of the Kirby Institute for many decades,” Dr Koonin added. “Our progress and achievements in the fight against HIV/AIDS is the result of collaboration and partnership and, in 2017, ACON was proud to honour David and his Kirby Institute colleagues with the ACON President’s award at the annual Honour Awards.

“We extend our deepest sympathies to David’s family and loved ones, as well as the staff of the Kirby Institute. He will be greatly missed by all of us here at ACON as well as more broadly across the HIV and health sectors in NSW, Australia and internationally,” Dr Koonin said.

Gay Star News: ‘Architect’ of Australia’s battle against HIV has passed away

Plus Magazine: Pioneering Global Leader in the Fight Against HIV has Died 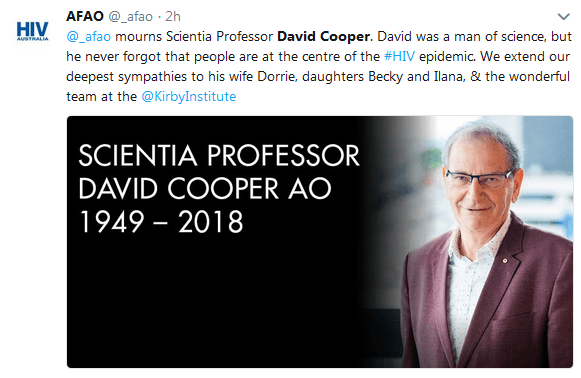 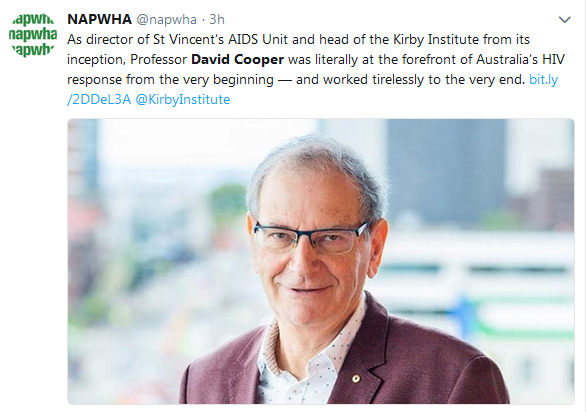 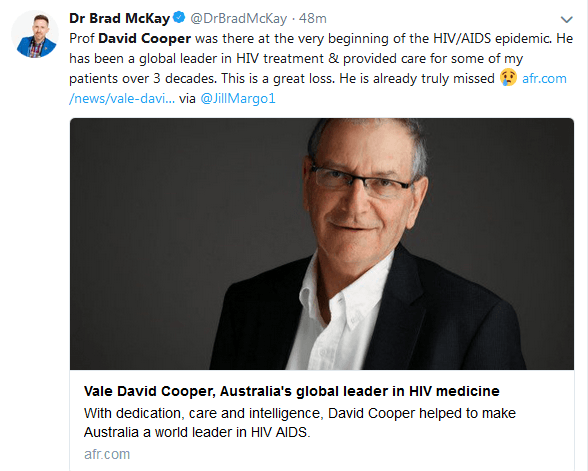 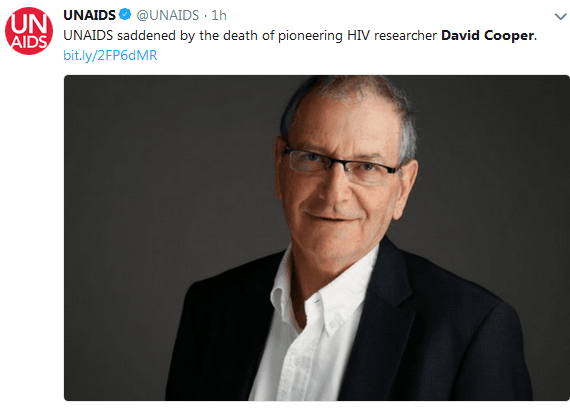 PrevPrevious“I was unwilling to accept the status quo”: Vonda Malone on her leadership journey (so far)
NextCall to action: ‘Serious threat to our right to speak out for a healthy community’Next