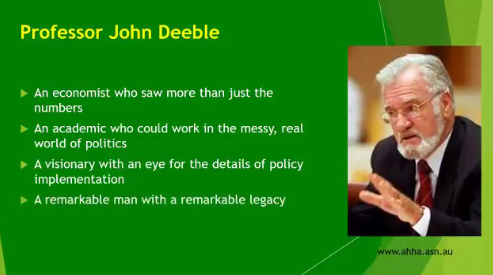 Still from a Twitter tribute to Prof John Deeble from AHCRA

Tributes have been flowing to Professor John Deeble AO, often dubbed the “father of Medicare”, who has died at the age of 87.

I honour the life and work of John Deeble. His dedication to quality health care for all Australians made Medicare among our greatest national achievements. I appreciated working with him. We are grateful for his vision, commitment, and leadership to advance our public health.

Among many other roles in an illustrious and pioneering health career, Deeble was Special Adviser to the Health Ministers in both the Whitlam and Hawke Governments, Chairman of the Planning Committees for both Medibank and Medicare, Founding Director of the Australian Institute of Health and Welfare, and a World Bank Consultant on healthcare financing.

The Australian Healthcare and Hospitals Association (AHHA), which named its health policy research institute after Deeble, paid a moving tribute to him, published in full below.

His funeral will be held on Friday 19 October at 1pm at St John’s Church, Reid, Canberra and afterwards at Old Parliament House.

AHCRA was saddened yesterday to hear of the death of Professor John Deeble and has prepared this brief tribute to his life and work pic.twitter.com/2N2kiKhPuo

Statement from the AHHA

‘It is with great sadness that we report the death of Professor John Deeble AO at the age of 87 years’, Australian Healthcare and Hospitals Association (AHHA) Chief Executive Alison Verhoeven said today.

Often dubbed ‘the father of Medicare’, John Deeble co-authored, with Dr Dick Scotton, the original proposals for universal health insurance in Australia in 1968, when they worked together at the Melbourne University Institute of Applied Economic Research.

The original proposals led to the establishment of Medicare’s forerunner Medibank during the term of the Whitlam Government.

Professor Deeble was subsequently closely involved as the architect of the reintroduction of universal healthcare in Australia, by then known as Medicare, in 1984.

‘John was most recently Emeritus Fellow of the Australian National University, a Sax Medallist and life member of the AHHA’, Ms Verhoeven said.

He was also Patron of the Deeble Institute for Health Policy Research, the AHHA’s research arm.

He was Special Adviser to the ministers for health in the Whitlam and Hawke Governments, Chairman of the Planning Committees for both Medibank and Medicare and a Commissioner of the Health Insurance Commission for 16 years.

His other appointments included First Assistant Secretary in the Commonwealth Department of Health, Founding Director of the Australian Institute of Health and Welfare, and from 1989 to 2005, Senior Fellow in Epidemiology and Adjunct Professor in Economics at the National Centre for Epidemiology and Population Health at the ANU.

Professor Deeble was also a World Bank Consultant on healthcare financing in Hungary, Turkey and Indonesia, and for over 10 years to 2005, an adviser to the government of South Africa.

‘He was an apolitical academic who, once he had identified a solution to a problem, regarded policy and advocacy as part of the job. He was a crusader against social injustice.

‘There was a familiar pattern to all of his work: he would identify emerging problems; follow up with extensive data collection and analysis; then formulate policy responses that fitted the facts rather than pre-conceived positions’, Dr Cole said

‘John’s social attitude and work ethic was exemplified by his studies in later years of the deteriorating building and equipment capital stock of public hospitals.

‘Because it was becoming a problem, he developed a methodology for valuing and depreciating the useable life of hospital buildings and equipment.

‘That is just typical of the many ways he applied his skills and ingenuity as a health economist and statistician on the national stage.

‘It was an amazing life of achievement for a boy born in the Wimmera wheatfield town of Donald, not far from the South Australian border, and who left school at the age of 15.’ 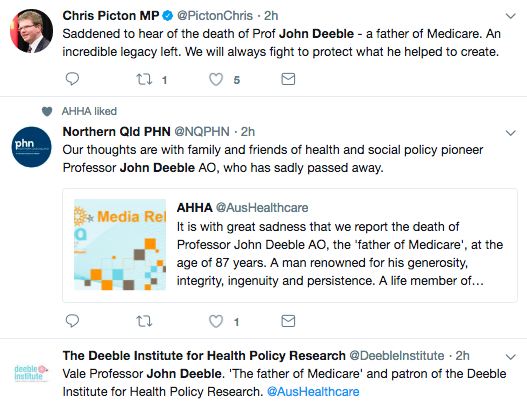