Tributes have flowed from around the world honouring the legacy of Emeritus Professor Judith Lumley AM, who died on 25 October. A notice published in The Age said she “died peacefully with the love of her family”.

La Trobe University, in an announcement published on 26 October, described Lumley as “a ground-breaking and world-renowned researcher and teacher who spent her career working towards better health outcomes for pregnant women and their children”, who would also “be remembered as a most generous person and a great mentor to many”.

La Trobe also published a series of tributes, and the University’s Judith Lumley Centre published this acknowledgement below:

Judith Lumley had a distinguished career in public health, with a major focus on perinatal epidemiology and maternity services research.

Following medical studies begun in Cambridge and completed at Monash University, Judith undertook her PhD in fetal physiology in the Department of Obstetrics and Gynaecology at Monash. While her three sons were small, Judith worked part-time in academic teaching and research (both in O&G and Paediatrics at Monash), and was also editor of Australian Family Physician for several years.

In 1982 Judith established and directed the Victorian Perinatal Data Collection Unit in the Department of Health, which to this day continues to collect high quality data on all births in Victoria – in no small part a legacy of Judith’s commitment to the importance of accurate and reliable routine data in public health surveillance and research.

Judith chaired the Victorian Ministerial Review of Birthing Services in 1988, conducting a landmark review which included the first ever survey in Australia of women’s views of their maternity care.

In 1991 Judith established the Centre for the Study of Mothers’ and Children’s Health, later called Mother & Child Health Research, with a program grant from the Victorian Health Promotion Foundation.

Approached to head the prestigious National Perinatal Epidemiology Unit in Oxford, she held that post in 1994 and 1995, returning to the Centre in 1996, where she remained Director, and a wonderful mentor to many staff and students, until her retirement in December 2008.

Judith’s research on the aetiology of preterm birth is world renowned, as is her work reviewing the evidence for interventions to reduce smoking in pregnancy. Involved in the Cochrane Collaboration since its establishment, Judith was a longstanding advocate not only for evidence-based clinical care, but also for evidence-based public health policy and practice.

She served as an advisor to the Canadian Perinatal Surveillance System from 1995 to 2008, served on the International Advisory Board for the Lancet for many years, and contributed tirelessly to the work of the National Health and Medical Research Council, reviewing grants and fellowships and participating on Council committees.

Judith co-edited the Australian and New Zealand Journal of Public Health with A/Prof Jeanne Daly from 2000 to 2008. Her work with the Journal was characterised by a clear focus on the quality of the evidence in articles, resting on the appropriate use of the right research method. She believed firmly that one of the tasks of a Journal is educational and argued that all manuscripts should be reviewed to give guidance to authors.

See also these tributes published upon her retirement in 2008. 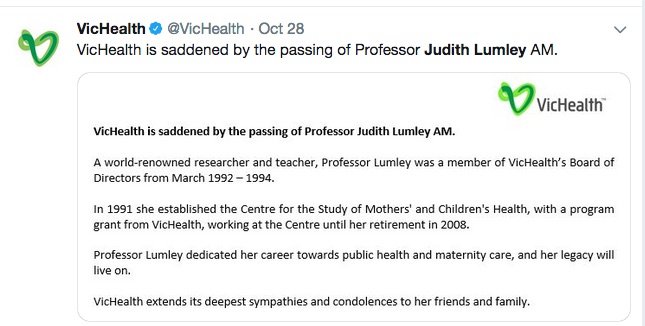 Also read Hilda Bastian’s article cited below, first published at her blog on the Scientific American website, which was cross-posted in Croakey in 2014. 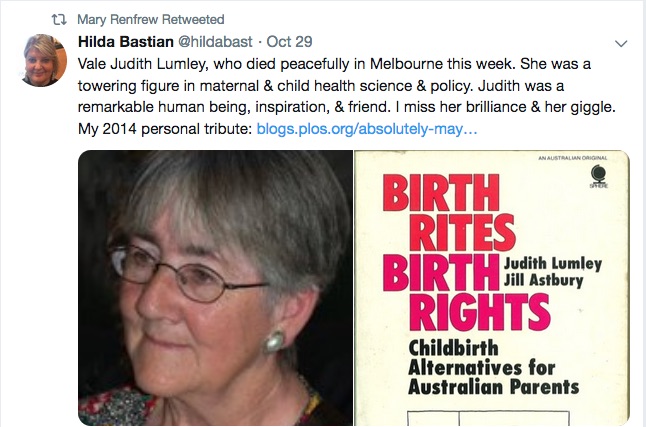 The funeral will be held in Melbourne on 2 November; details are here.