Attendees at the launch of the Top 10 public health successes report. Photo supplied by PHAA.

Introduction by Croakey: The value of investing in preventive health is highlighted in a new report by the Public Health Association of Australia (PHAA) Victorian branch.

The report, Public Health in Victoria: Ten Successes to Guide a Healthier Future, puts the spotlight on preventive and public health successes in Victoria such as tobacco control, establishment of Victorian Health Promotion Foundation (VicHealth) and improving road safety.

“With the additions of an ageing population and the rise of non-communicable diseases, there has perhaps never been a stronger basis for investing in public health and preventative action to support all in Victoria to live longer and healthier lives,” PHAA Victorian branch committee member Dr Laksmi Govindasamy writes below.

Govindasamy reports on last month’s launch of the report that was attended by Nicola Roxon, former Attorney-General of Australia and Chair of the VicHealth Board, Ted Baillieu AO, former Premier of Victoria, John Thwaites AM, former Deputy Premier of Victoria and PHAA Chief Executive Adjunct Professor Terry Slevin.

This article is republished from PHAA Intouch public health blog with permission.

Last month at Victoria’s Parliament House, the Public Health Association of Australia (PHAA) Victorian branch celebrated the launch of a report that will guide Victoria to a healthier future.

The #Top10Report highlights the essential public health and preventative interventions that have created safer and healthier communities and supported many people in Victoria to live longer and healthier over the past century.

These include world-first initiatives like the introduction of tobacco controls, prevention efforts for skin and cervical cancers, accident and injury prevention at work and on our roads, and the formation of a dedicated health promotion organisation, VicHealth.

These successes have resulted from the collaborative efforts of Victorian governments, political leaders, public health researchers, advocates and – most importantly – the Victorian community.

The report also aims to present a plan for how governments can further invest in public health to generate a sustainable, future-oriented Victorian health system and improve the health of all people in Victoria.

The event recording is available here.

Roxon and Thwaites reflected on the challenges they navigated in initiating legislative changes to support tobacco control, which has had a lasting legacy for community wellbeing. However, as reflected in the report, the work to limit tobacco exposure should not be considered complete.

The rise of e-cigarettes and vaping, particularly among young people, emphasises the importance of ongoing public health efforts.

Baillieu said that these include efforts in the building industry around asbestos management and cladding controls. He also suggested online safety, the built environment and air pollution as future public health priorities, in addition to those outlined in the report.

The former premier also emphasised the importance of bipartisan approaches to progress public health priorities that benefit all Victorians.

Despite significant public health achievements, the COVID-19 pandemic has brought new challenges for public health in Victoria and called attention to existing issues.

“The COVID-19 pandemic has shown us where the gaps are and highlighted the need for greater investment in preventive public health,” PHAA Victoria President Nicholson, said. Nicholson stressed that increased investment will help “create a nimbler, stronger, and more sustainable health system that can withstand future challenges.”

“These ten challenges include embedding diversity, equity and inclusion in all policies, acting on climate change and its impact on health, and enacting mental health system reform. Doing so means we must shift the health system and health budget towards prevention and increase investment in preventive health to five percent of total health expenditure by 2030 from the current two percent.

“That will bring Victoria in line with the National Preventive Health Strategy 2021–2030 released last year, and make a real difference to current and future generations.”

Currently, Victoria’s investment in public health is only about two percent of the health budget, with no overall growth over time. At the same time, Victoria’s total health expenditure is trending up in an unsustainable manner.

As Slevin noted, public health interventions have a tangible impact in reducing demand for health services. He acknowledged the persisting confusion between public health and public hospital services, though the two are intertwined.

“When public health fails, we put pressure on our public hospital system,” Slevin said. “One in four of the people admitted to hospital today in Victoria, that hospital admission could have been prevented if we got public health right.”

With the additions of an ageing population and the rise of non-communicable diseases, there has perhaps never been a stronger basis for investing in public health and preventative action to support all in Victoria to live longer and healthier lives.

Follow the hashtag #Top10Report for more tweets from the report and launch. 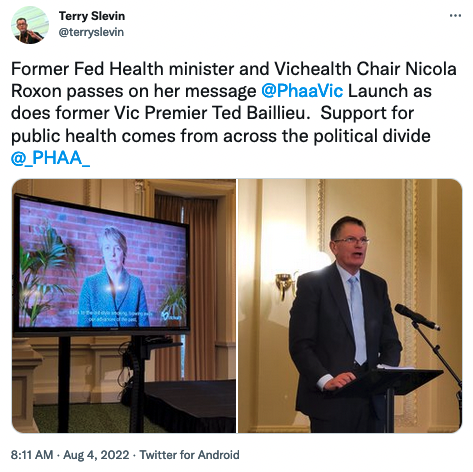 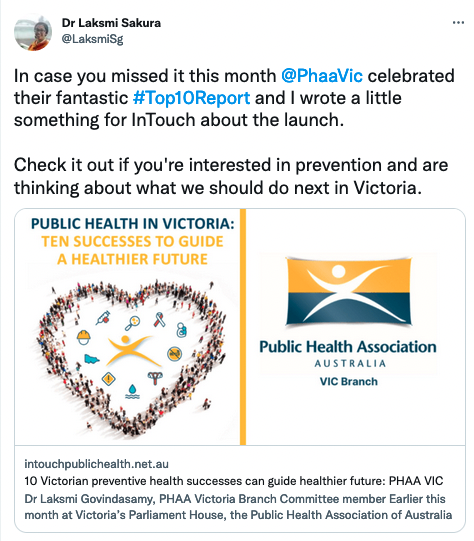 PrevPreviousPlease read and share this new report from National Rural Health Conference, with a focus on innovation and collaboration
NextRepresentation, understanding and equity: a call for a better NDIS for Australians with multiple sclerosisNext