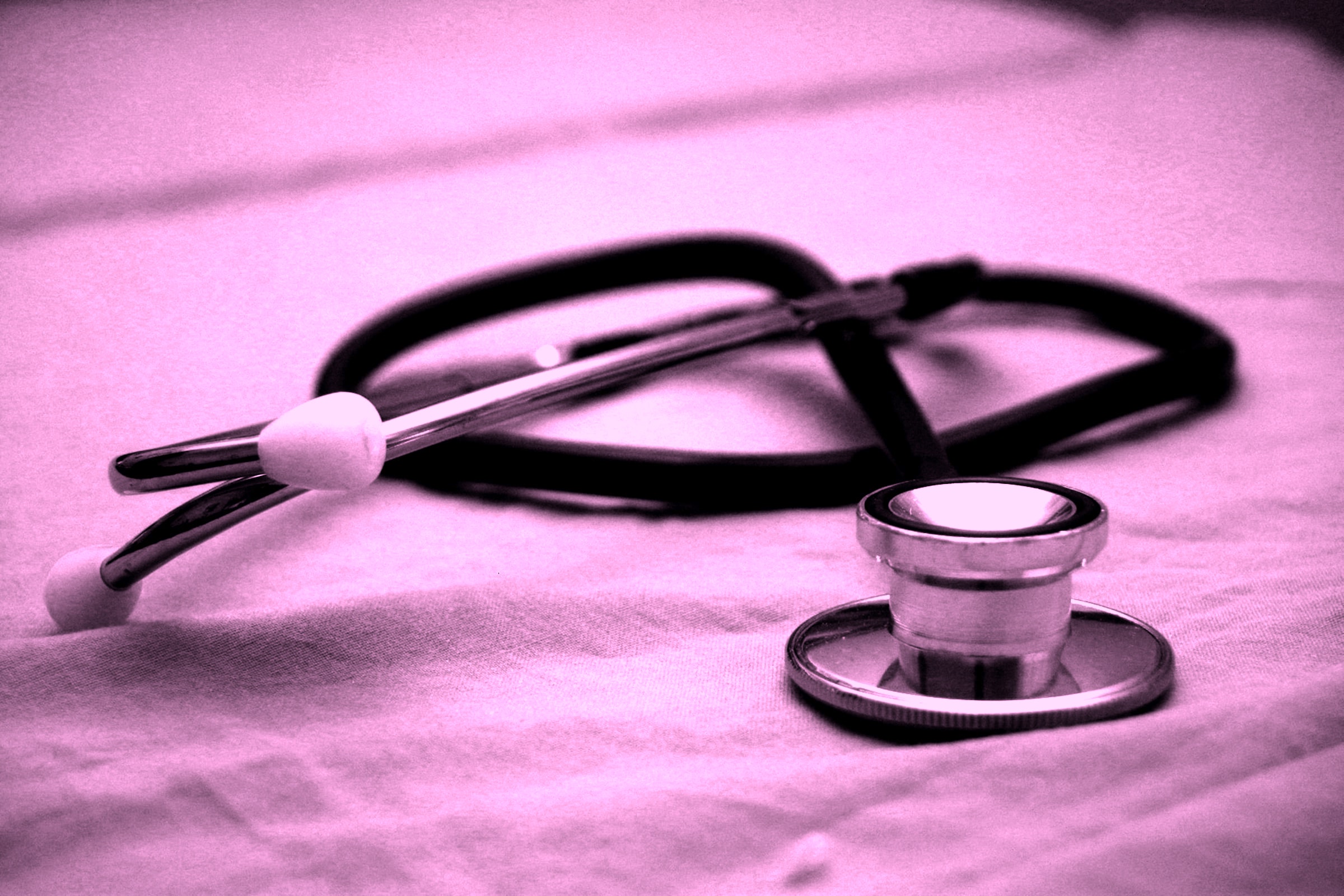 The Victorian Government’s move to make nursing and midwifery education free will have national repercussions, and is a timely development ahead of the Federal Government’s Jobs and Skills Summit this week.

In her final story from the Australian College of Nursing’s National Nursing Forum, Coopes also reports that The Greens will push at the Summit for a national ‘NurseKeeper’ initiative.

Victoria’s announcement that it would make nursing and midwifery education free to staunch a post-pandemic burnout exodus has heaped pressure on the Federal Government to fund debt forgiveness nationally for nurses, including retrospectively, ahead of this week’s Jobs and Skills Summit in Canberra.

Premier Daniel Andrews made headlines over the weekend with an announcement that his state would pay the HECS debt of more than 10,000 aspiring nurses and midwives under a $270 million scheme aimed at bolstering health workforce recruitment as the system continues to feel the strain of COVID-19.

The initiative will see all 2023-24 enrolments to professional-entry nursing and midwifery courses in Victoria supported with a $16,500 bursary, $9,000 of which will be paid up front, with the balance granted once the recipient has worked in a public health service for two years post-graduation.

As well, $10,000 will be available to support the post-graduate course fees of up to 3,000 nurses looking to advance their skills and training.

Peak nursing groups, including the Australian Nursing and Midwifery Federation, welcomed the “sophisticated and targeted” plan, but warned that – unless replicated nationally – it risked reinforcing shortages in other states and increasing disparities in wages and conditions.

The Council of Deans of Nursing and Midwifery was among those expressing concern about the “unintended consequences” of the Victorian plan for other jurisdictions and calling for “urgent action to remedy the likely movement of nurses and midwives from other parts of Australia” in response.

The CDNM described fee relief as a “critical lever to enhance recruitment and retention” but said it required a “sustained national program of investment” that provided for equitable access, uniform pathways into practice and targeted support for nurses to enter primary and rural and remote care.

This perspective was strongly advocated for by the Australian College of Nursing at last week’s Health Workforce Roundtable held in Canberra ahead of the Jobs and Skills Summit on 1-2 September.

Acting ACN CEO Yvonne Mckinlay said a debt amnesty had to be national, and apply both retrospectively – forgiving the debts of nurses currently working – and prospectively.

“It will provide much-deserved recognition of the immense sacrifice nurses have made to protect our communities through the COVID-19 pandemic,” Mckinlay said of widening the amnesty’s scope to include practicing nurses.

Both the ANMF and ACN advocated at last week’s Roundtable for a suite of initiatives to boost the nursing pipeline, including improved pay and conditions and streamlining the visa and registration processes for nurses from overseas.

Immediate actions like these were required to address critical shortfalls in rural and remote nursing and the aged care sector, ACN said.

The workforce crisis in nursing was a priority discussion at the recent National Nursing Forum in Darwin, where Health Minister Mark Butler told delegates extending the scope of practice for nurses and recognising their value through reforms to the MBS was “unfinished business for the new Labor Government”.

“At a time where healthcare demand is soaring and workforce pressures are very severe, it just doesn’t make sense not to have all of our healthcare professionals working as close as possible to the top of their scope of practice,” Butler told the NNF in a pre-recorded video address.

“That’s nowhere more important than for the more than 400,000 nurses we have here in Australia.”

Butler said one of the priorities of the Strengthening Medicare Taskforce would be to examine how to better utilise and maximise the skills of nurses in the primary care setting.

He also spoke to the importance of implementing the Uluru Statement from the Heart in full, something the Labor Government has committed to. 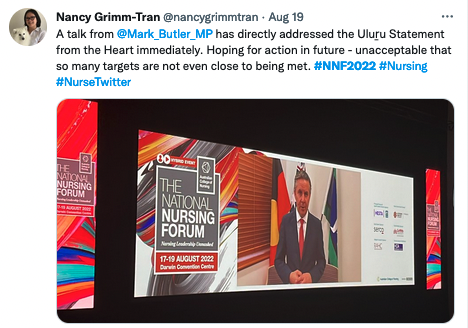 Greens leader Adam Bandt also addressed the Forum virtually, telling delegates his wife is retraining to become a nurse – a female-dominated profession that he said was “underpaid, overworked and all too often overlooked”.

In the last three years, nurses have held the world together. They have held the country together, and they have held our communities together. Whether it was holding up iPads to dying patients, holding lonely folks’ hands, a kind word or a clean wound.

Holding it together and keeping people safe, all while wearing personal protective gear day in and day out, without breaks, with leave often denied. All while doing more and more with less. You deserve more than this.”

Bandt said the Greens would be pushing at this week’s Jobs and Skills Summit for a national ‘NurseKeeper’ initiative, providing an upfront retention bonus payment of $5,000 to Australia’s nurses and paramedics, with a second to follow in 12 months’ time.

At about one percent of the cost of the ALP’s contested Stage Three tax cuts, which he said would advantage men at twice the quantum of women and deliver the same amount to the top one percent income backets as the bottom 65 percent combined, Bandt described NurseKeeper as “thoroughly affordable”.

“Instead of spending $244 billion on tax cuts for billionaires and the wealthy, the government should give $3 billion to nurses to reward them and stop them leaving the profession.”

He told the NNF it was also incumbent on Labor to ensure that nurses were adequately paid for their work, with nationally consistent shift penalties, as well as mandated nurse to patient ratios.

“At the jobs summit we will push the Government to change the law to require award wages in women-dominated industries like healthcare to increase by 0.5 percent above CPI each year, for the next ten years, to push women’s wages up and close the gender pay gap,” he said.

“When you or your family is in trouble, you want the person looking after you to be a well-trained, well-funded and well-resourced nurse, not a nurse being paid in platitudes.”

Presaging the Andrews Government announcement, Bandt said free training for nurses and the abolition of current nursing education debt was an important piece of the puzzle.

“We have an ageing population and a crisis of inequality,” said Bandt. “It’s time to really confront and overcome these profound challenges we face as a nation.” 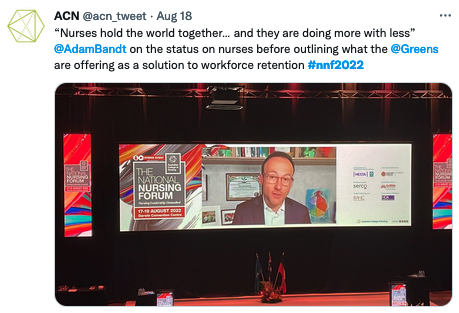 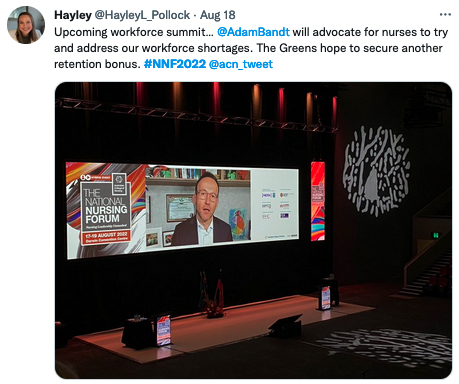 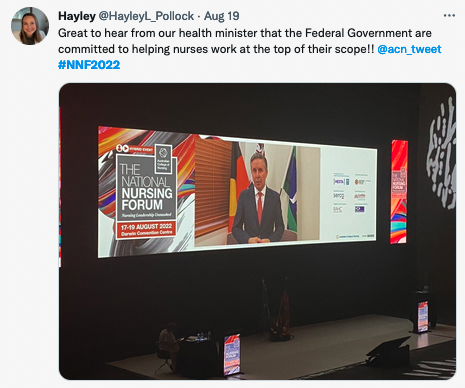 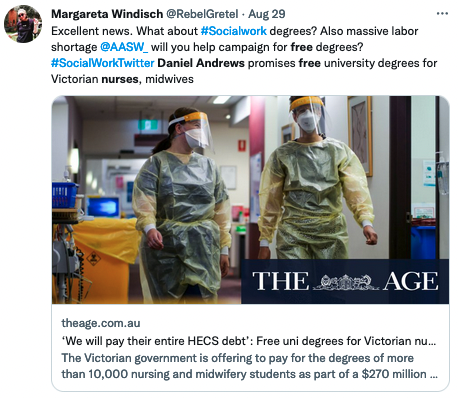 This is the final story from Croakey Conference News Service’s coverage of the ACN – National Nursing Forum 2022. Visit this link for all stories from #NNF2022.