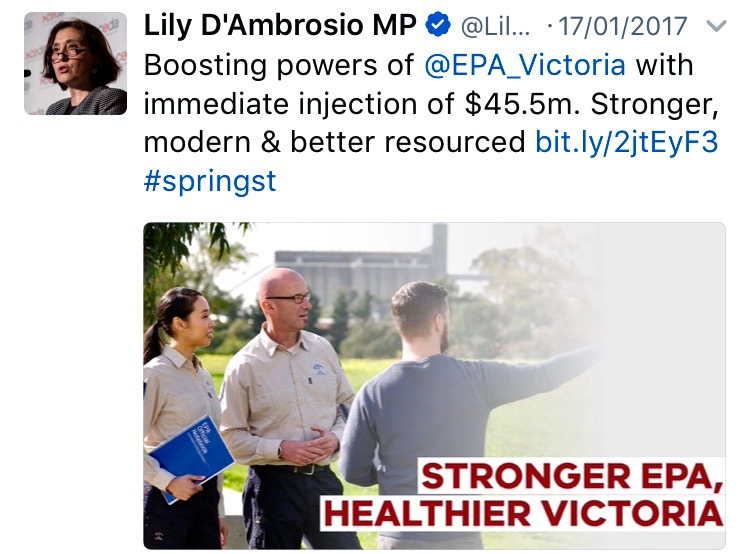 The changes were laid out in an official response to the findings of the Independent Inquiry into the Victorian EPA, an exhaustive review which was commissioned in 2015 amid perceptions that the EPA was sluggish and lacking in potency.

As the post below affirms, the government’s overhaul of the EPA will address these weaknesses, as well as having broader positive effects on human health.

In fact, write Dr Karen Kiang and Professor David Shearman AM, from  Doctors for the Environment Australia it’s the sort of reform that should and could be rolled out nationally.

The independent Inquiry into the Victorian Environmental Protection Agency (EPA) evoked a response from the Andrews government recently, that will have positive effects on human health.

In their reports on this response, The Guardian and The Age emphasised the introduction on new measures to enforce and more effectively prosecute breeches of environmental standards. While reform and strengthening these activities is essential, even more importantly, the government’s response recognised the importance of preventative health.

An environmental health team has now been established within the EPA, and the relationship between EPA and the Victorian Department of Health and Human Services (DHHS) has been formalised. In addition, a health expert will be added to the EPA’s Board, and the DHHS Chief Health Officer will be on the Board’s science, engineering, and health advisory panel.

Writing last week for Independent Australia we sought to provide a clinical perspective, emphasising the huge burden imposed on society by the harmful health effects of air pollution. We suggested that the EPA reforms provide a good model for other states to emulate and, indeed, for a reforming a federal government response – should one arise

Public accountability and incentives for change

The lessons of the Hazelwood mine fire have been learned. The Victorian government has recognised that “public information on emissions is essential for transparency, incentivising emissions reduction, increasing public awareness of human health risks, meeting community expectations and informing regulation”.

As detailed by Doctors for the Environment Australia, it could be a means to encourage closure of coal-fired power stations in other states as well, enabling them to transition away from coal combustion at a time when the federal government sits on its hands.

The Victorian government response says, “A simplified set of legislated principles will be introduced. The principles recommended by the Committee form a sound starting point, and will support delivery of other reforms such as the EPA’s increased focus on prevention, public health and environmental health”.

The Independent Inquiry had asked for:

Health professionals who have waded through Environmental Impact Assessments and approvals for mining and gas developments in many states will have found a failure to meet some or all of these principles. These principles need to be enforced. With these new reforms, the Victorian government promises to provide “strengthened governance for the EPA, providing independence and accountability”.

One possible reason for inadequate assessments is that state governments want development, and become back door proponents rather than arbiters. Another possible reason is that states do not have the expertise nor funds similar to those now promised by Victoria – $45.5 million over two years added to an already large budget.

If all states and territories were to adopt these important reforms, the cumulative cost would be enormous, providing a case for an independent national EPA.

A national EPA would set standards based on the best national expertise, after which the states would take responsibility for delivering outcomes. A national EPA would have significant input into complex issues such as unconventional gas mining or air pollution and could minimize duplication of activities; currently, each state undergoes its own costly enquiry, producing its own regulatory outcome, based on the same scientific and health principles.

Finally, a national EPA could institute major health reforms like the US Clean Air Act, saving thousands of lives and huge health cost (that is if the US Act cannot be Trumped). Australian Governments are fearful of such reform and cite Constitutional barriers.

The US was able to find a way through the federal/state entanglements; similarly, there are legal mechanisms that can be used if the Australian government is willing and brave enough to implement reform. The benefits to human health are clear.

*Doctors for the Environment Australia made a submission to the Independent Inquiry into the Victorian Environmental Protection Agency on the reforms necessary in order to include human health as a priority. www.dea.org.au

Dr. Karen Kiang is a paediatrician, working in the area of refugee and international child health in a hospital in Melbourne. She is particularly interested in climate change and its substantial negative health impacts on children in developing countries.

Dr David Shearman AM is Emeritus Professor of Medicine at the University of Adelaide. He has previously been a faculty member at Edinburgh and Yale Universities, and is now Honorary Secretary of Doctors for the Environment Australia, an organisation which concerns itself with links between the environment (particularly climate change), and human health.