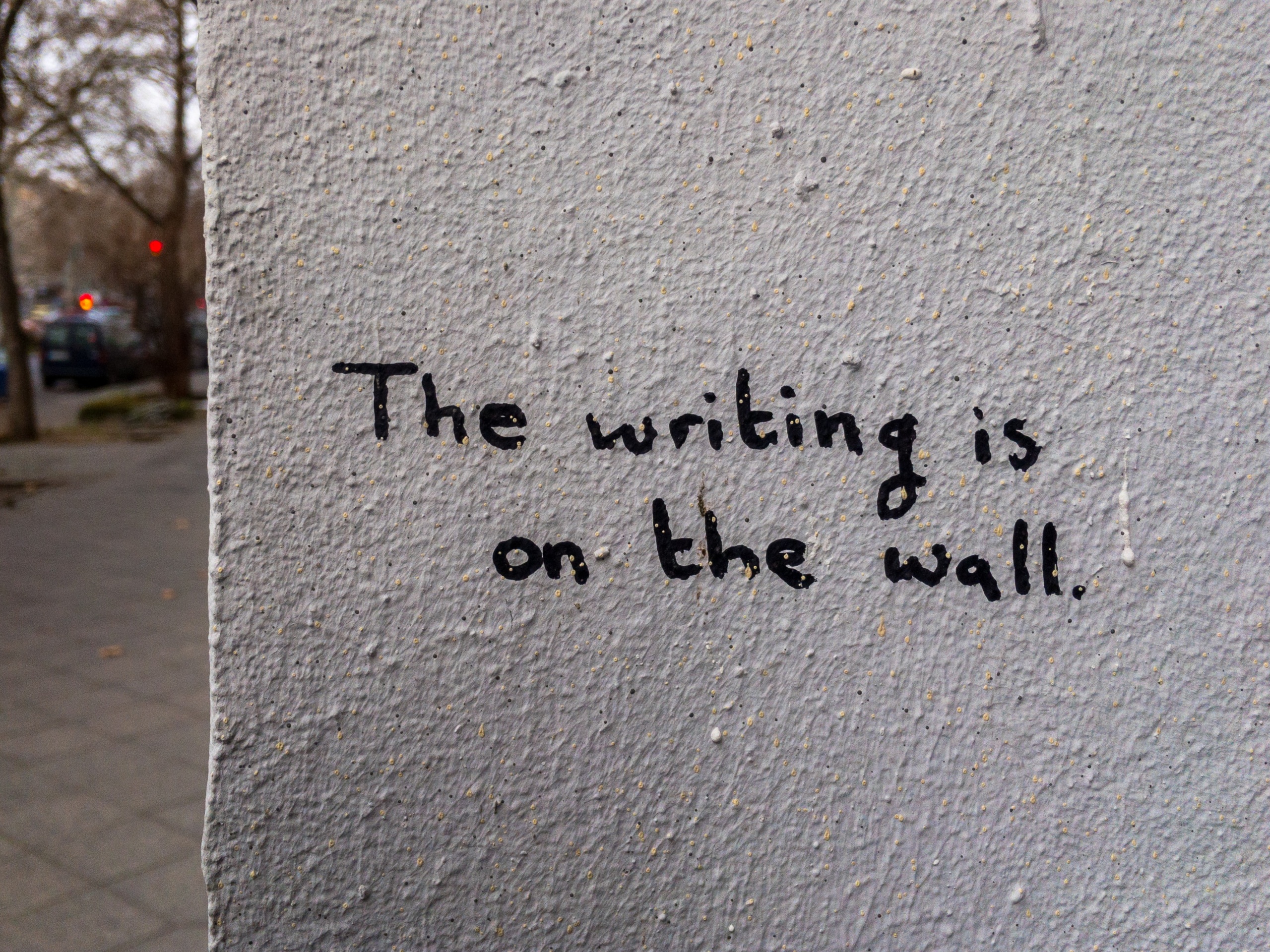 The writing is on the wall - time for action on prisoner healthcare is now. Photo by Randy Tarampi on Unsplash

Introduction by Croakey: A coronial inquest into the death in custody of Veronica Nelson, a proud Gunditjmara, Dja Dja Wurrung, Wiradjuri and Yorta Yorta woman, is highlighting inadequate and unjust healthcare in Victoria’s prisons, according to Andreea Lachsz, Nerita Waight and Sarah Schwartz, legal representatives from the Victorian Aboriginal Legal Service.

On its twelfth day, the inquest heard that Nelson had been screaming for help from pain in the hours prior to her death.

In their article below, Lachsz, Waight and Schwartz discuss imprisoned people’s right to healthcare, the shameful number of Aboriginal and Torres Strait Islander deaths in custody and the need to learn from previous lessons.

“The Victorian and Federal Governments do not need any more ‘examples’ of what can happen when healthcare is not equivalent to that in the community, and is not culturally safe,” they state.

Their article was first published in The Conversation.

Aboriginal and/or Torres Strait Islander readers are advised that names of deceased people are included in this article.

The Victorian Aboriginal Legal Service is representing family members of Veronica Nelson, Ms Calgaret, and Michael Suckling in coronial investigations/inquests into their deaths in custody.

When someone is placed in prison, they are entirely dependent on prison officers and prison healthcare providers.

Incarcerated people do not get to choose when they see a doctor or mental health practitioner, when they take medicine, or what type of care they receive.

They cannot call 000 and be taken to a hospital if they are dangerously ill.

In Victoria, if a person in prison is Aboriginal and/or Torres Strait Islander, they do not get access to culturally competent care through Aboriginal community-controlled health organisations.

In Victoria, prison healthcare is provided by for-profit private companies contracted by the state government.

Imprisoned peoples’ physical health and/or social and emotional wellbeing is at the mercy of prison officers and prison health-care providers.

Through our practice at the Victorian Aboriginal Legal Service, we have seen the differences between how people are treated in the community and how they are treated in prisons and youth prisons.

Read more: Does the pre-election budget address ways to realistically ‘close the gap’ for Indigenous people?

The right to healthcare continues when people are incarcerated

International law requires “prisoners should enjoy the same standards of healthcare that are available in the community”.

This healthcare should be “free of charge” and “without discrimination”. It also makes clear everyone has the right to the “highest attainable standard of physical and mental health”.

The Victorian Charter of Human Rights and Responsibilities requires that persons deprived of liberty (such as people in prison or police custody) be treated with humanity and respect.

The Coronial Inquest into the death of Yorta Yorta woman, Aunty Tanya Day, found that police and prison staff must ensure access to medical care for detained people.

Under law, incarcerated people in Victoria have the “right to have access to reasonable medical care and treatment necessary for the preservation of health”.

Yet incarcerated people in Australia are excluded from access to funding under Medicare and the Pharmaceutical Benefits Scheme. This impacts not only healthcare in prisons by Aboriginal health services, but also the ability to provide continuity of care to incarcerated Aboriginal people as they enter and exit prison.

In Victoria, healthcare in prisons is the responsibility of the Department of Justice and Community Safety, not the Department of Health. Healthcare is provided by a subcontracted and fragmented system of multiple, private health-care providers. This contributes to inconsistent healthcare across the prison system.

From our clients in prison, we hear about limited access to healthcare for critical conditions such as cancer, diabetes and heart problems.

Self-harm incidents among Aboriginal people in Victorian prisons have risen by more than 50 percent. Despite this, we still hear of lack of access to counselling, psychiatric care, trauma and grief support.

Read more: How the kidnapping of a First Nations man on New Year’s Eve in 1788 may have led to a smallpox epidemic

Imprisonment should not be a death sentence

There have been more than 500 Aboriginal and/or Torres Strait Islander deaths in custody since 1991. Last year, a Guardian analysis on the 30th anniversary of the report of the Royal Commission into Aboriginal Deaths in Custody found:

For both Aboriginal and Torres Strait Islander people and non-Indigenous people, the most common cause of death was medical problems, followed by self-harm.

However, the Guardian also found Indigenous people who died in custody were three times more likely not to receive all necessary medical care, compared with non-Indigenous people. For Indigenous women, the result was even worse – fewer than half received all required medical care prior to death.

This conclusion is chilling, given that incarcerated people, particularly Aboriginal people, have higher rates of underlying health conditions than the general population.

The Royal Commission into Aboriginal Deaths in Custody recommended prison healthcare be culturally safe and “be of an equivalent standard to that available to the general public”. This recommendation still has not been implemented.

Multiple upcoming coronial inquests will examine deaths in custody in Victoria’s prisons, and the adequacy of prison healthcare.

Aboriginal man, Michael Suckling, died of a suspected stroke at Ravenhall Correctional Centre. His death will be examined in a coronial inquest later this year.

The inquest will examine matters including the adequacy of the healthcare Veronica was provided in prison, and whether her Aboriginality affected the treatment she received.

Ms Calgaret, a proud Yamatji, Noongar, Wongi and Pitjantjatjara woman, died at Sunshine Hospital after being transferred from Dame Phyllis Frost Centre in a critical condition in November 2021. The death of a newborn baby at the same prison is also being examined in an upcoming coronial inquest.

Despite these deaths and widespread calls for the Victorian Government to invest in community not prisons, the government is proposing to expand Dame Phyllis Frost Centre.

The first Aboriginal community controlled health organisation was founded in Redfern in 1971, “in response to experiences of racism in mainstream health services and an unmet need for culturally safe and accessible primary healthcare.”

Aboriginal-led health organisations are essential to ensuring culturally safe health services are provided to Aboriginal people, and are a manifestation of Aboriginal self-determination.

In the Northern Territory and the ACT, Aboriginal community controlled health organisations have begun coming in to prisons to deliver primary health services in adult and youth prisons.

This is a crucial first step to providing culturally safe healthcare to incarcerated Aboriginal people. This will improve access to healthcare for those who are imprisoned, and provide support and consistency upon release.

This is vital when many of our community members cycle in and out of prison at frequent intervals, due to failures of the justice system.

Time to action the lessons learned

In prisons, officers and prison health staff make life and death decisions every day. When they are negligent, there must be accountability, space for truth, and justice.

The Victorian and Federal governments do not need any more “examples” of what can happen when healthcare is not equivalent to that in the community, and is not culturally safe.

Aboriginal people are dying in custody, becoming disabled, or living with the preventable development or exacerbation of mental or physical health conditions as a result of negligent practices.

The writing is on the prison wall.

This article was written with permission from Apryl Day to write about Aunty Tanya Day, and the family members, whom VALS represents, of Veronica Nelson, Ms Calgaret, and Michael Suckling.

Andreea Lachsz is the Head of Policy, Communications and Strategy at the Victorian Aboriginal Legal Service. VALS is representing the family members of Ms Veronica Nelson, Ms Calgaret, and Michael Suckling in coronial investigations/inquests into their deaths in custody.

Nerita Waight runs the Victorian Aboriginal Legal Service which receives funding from Department of Justice and Community Safety and Corrections Victoria. Nerita is currently a member of the Victorian Women’s Correctional Services Committee.

Sarah Schwartz is a Senior Lawyer / Advocate at the Victorian Aboriginal Legal Service and acts for family members of Veronica Nelson, Ms Calgaret and Michael Suckling in coronial proceedings into their deaths in custody.

Follow The Dhadjowa Foundation and #JusticeForVeronicaNelson on Twitter for updates on the coronial inquest into Veronica Nelson’s death.