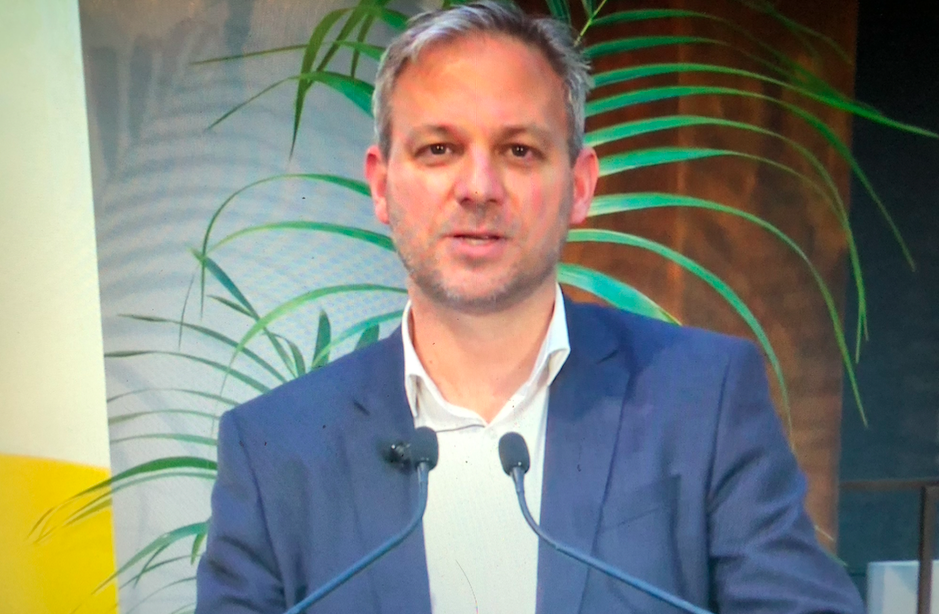 Victoria’s Chief Health Officer Professor Brett Sutton has called on health leaders to be “open to new data and new science” in the fight against COVID-19 and other looming existential threats, warning against the dangers of hubris, intransigence and group think.

It struck a different tone to a speech, the next day, from Australia’s former Deputy Chief Medical Officer Dr Nick Coatsworth, who castigated unnamed health professionals for “narcissism thinly cloaked as activism” that he said had put Australia’s COVID-19 recovery at risk.

Victoria’s Chief Health Officer Professor Brett Sutton has urged health leaders and practitioners to listen to the voices who contest their views, and to throw themselves into a “space of ambiguity and continual reflection” that rejects hubris, intransigence and group think.

In a speech to healthcare workers titled ‘Pain, pressure and progress’, Sutton last week told the Safer Care Victoria #GiantSteps21 conference that the COVID-19 pandemic was for him a crisis that was “at once transformative and stultifying”.

“We need to reflect on everything we’ve been through together – all the tragedy and trials, the change and churn and the hope and triumph,” he said, talking about Victoria’s journey through its devastating second wave, which saw 820 deaths, 3,561 health care workers infected and a 112 day lockdown, to now having 80 days without local transmission.

Sutton hailed the ‘Swiss Cheese’ systems model of pandemic defence, outlined by Australian virologist Ian Mackay in the New York Times last year, building on the work of Professor James Reason, where no single layer of defence works without many others.

But there are “challenges to the cheese”, he said.

Group think is a danger

Reflecting whether or not hubris comes from ego, narcissism or fear of being shamed, Sutton said it “really has no place” in a systems approach.

Neither did intransigence and, while orthodoxy has a place, it can also be “part of that inertia to change”. Group think, he said, “is a danger”.

“Always reflect, listen to the voices that are contesting your view and throw yourself into that space of ambiguity and continual reflection and then be open to saying, ‘Hey, I have a new view’ or ‘I got it wrong previously’ and ‘let’s move forward together’,” he told the conference, which was focused on safer healthcare delivery, under the theme “Crisis drives change”.

Referring to clear contested space around airborne versus droplet transmission, Sutton said “we need to be open to new science, new data, new empirical evidence around everything to do with this virus, including transmission and how to protect ourselves”.

Victoria’s lesson on transmission in healthcare settings — that in the first wave, just 22 percent of healthcare workers who acquired COVID-19 did so at work, versus 69 percent in the second wave — was “a really powerful one”, he said.

Sutton, who fronted the Victorian media nearly every day for months through the two state lockdowns, laughed when he opened the online presentation, saying it was funny to be in a room with cameras and “no aggressive journalists”.

Still he ended up making headlines anyway, with reports, later withdrawn, that he had (in another recent health conference) critiqued the State Government as steadfastly refusing to adapt or acknowledge mistakes.

He told The Sunday Age he was talking about the approach taken “by some people and agencies around the world” who did not act as early and robustly as they needed, and in no way about the Victorian Government. 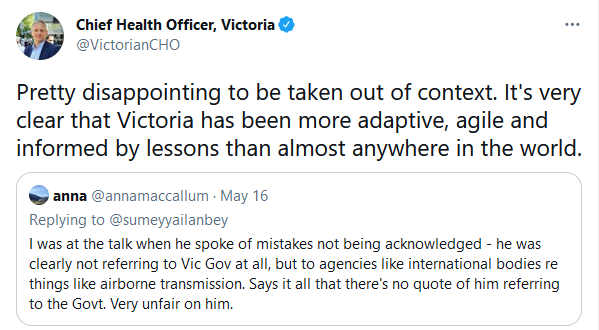 Talking about the personal impact of the pandemic on him and his work, Sutton referred to the the work of US psychology Professor Richard Tedeschi on post-traumatic growth.

Tedeschi, who has worked with army veterans, says that negative experiences can spur positive change, including a recognition of personal strength, the exploration of new possibilities, improved relationships, a greater appreciation for life, and spiritual growth. 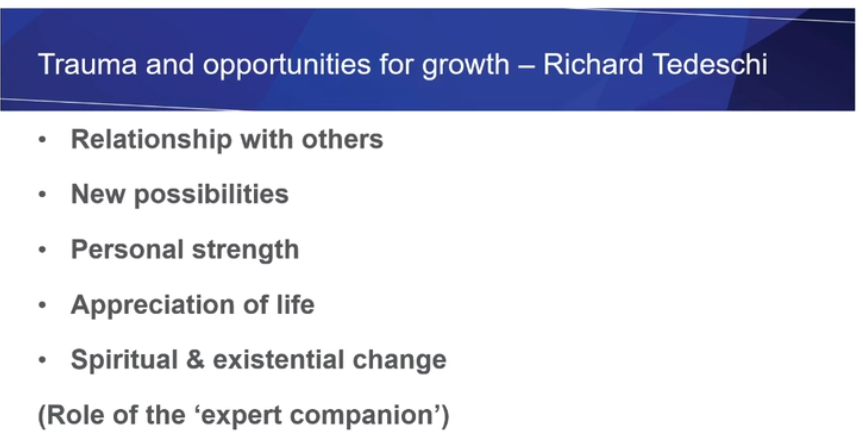 Sutton said the pandemic had given him a “heightened sense of preciousness” of the people in his life and to feel prepared for managing significant challenges in future.

For many, he said, the challenges of the past year or so could be an opportunity to “reflect on the most important things and take the time, if appropriate for you, to reset where want to focus your energies and purpose in life”. He had benefited from having what Tedeschi calls “expert companions”, with colleagues and family, particularly his wife.

Healthcare workers particularly have the opportunity to have that, as well as to “be that expert companion for others”, he said.

In his wide-ranging speech and Q&A session, Sutton told the conference there are many professional and global lessons to learn from the pandemic.

These include the need for better protections for staff and patients in both health and aged care settings, greater investment in prevention, a greater focus on inequity and the social determinants of health, and for development of a national health workforce strategy with “surge capacity” in public health.

Reflecting on high death rates in aged care during Victoria’s second wave (where one-third of those who developed COVID died), he said Australia should look to Singapore, which had more cases but only 30 deaths, in part due to how it looks after its elderly but also “the system elements they’ve got to protect aged care”.

At the other end of the age spectrum, asked about the impact on young people’s mental health, he said there is still a lot of contention around when and how to close schools, and how best to balance education and wellbeing of young people with efforts to halt transmission.

Beyond that, he told the conference, the health sector will have to prepare for ongoing existential challenges, including climate change and antimicrobial resistance.

“There will be profound increasing uncertainty in a world that changes day to day,” he said. “We’re in the middle of info tech and biotech revolutions, we’ve got issues of human and planetary connectedness that have played out in this pandemic, (we’re seeing) vaccine nationalism, and we’ve got reflections on how liberal democracies are challenged.”

Embedding a prevention approach to public health will be key to heading off another pandemic and those other existential threats, he said, warning of emerging evidence that antimicrobial resistance may kill more people globally than cancer by 2050.

Asked about systemic change, he said COVID had also shone a light on weaknesses and gaps, not just in hospital settings but across society, at issues like socioeconomic inequality, homelessness, crowded accommodation, big families, and insecure work.

“There will be different pandemics, different existential challenges…but I suspect the same core elements, the ‘causes of the causes’, the social determinants of health will be in play…and we need to address those and they often relate to inequity and inequality.”

Sutton said the power of preventive and population based health would help ease the pressure on the overstretched health workforce, and make huge financial savings in the long run.

But he said governments still need to invest longer term in a workforce strategy for both public and acute health, that factors in surge requirements, “so we’re not all going 16 months flat out without pause”.

“We can’t all be full capacity all the time, we need to allow for the ebb and flow,” he said.

In public health, that means going beyond just public health physicians like him to the broader workforce, including academics and researchers, “being able to mobilise a crisis response when needed”.

Sutton told the conference that Victoria is moving into “COVID normal”, with vaccination offering the path out of the crisis, though “not as fast as I’d like”.

He further raised concerns about vaccination rates today on Twitter, urging Australia to step up vaccination rates, saying that a number of countries — Mongolia, Timor-Leste, Vietnam, Laos, Singapore and Taiwan — that had also been enjoying no community transmission were now facing worrying outbreaks.

Messaging around vaccination was a key focus in a speech last week from former Deputy Chief Medical Officer Dr Nick Coatsworth, who slammed “elements of the (medical) profession” for being “less than helpful” in garnering community support for the vaccination program.

“There is a hardcore rump of activist doctors who have been anti-Astra Zeneca since the start of this year, misquoting and misrepresenting the phase 3 trial data and, in my view, substantially undermining the national program,” Coatsworth told the Royal Australasian College of Surgeons last Thursday, according to an edited version of his speech published in The Age.

Many of them were also “perpetuating the myth that federal and state government health advice has ignored the risk of aerosol transmission of COVID-19,” he said, describing Twitter as the “graveyard of nuance, the assassin of good public policy and the enemy of consensus”. 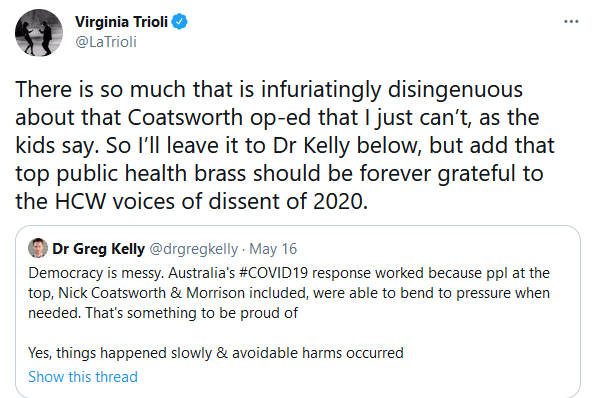 In the speech, Coatsworth said Australia must accept the return of COVID-19 cases as we gradually re-open our borders.

“It is clear we will not have our borders closed indefinitely, we will not have quarantine stations in perpetuity while we aim for the false idol of eradication, and we need to come to terms with the idea that we cannot, nor do we need to, ride this one out in an eliminationist bunker,” he said.

The original  feature image for this story was changed after publication for formatting reasons.

See Croakey’s archive of stories on safety and quality of healthcare.