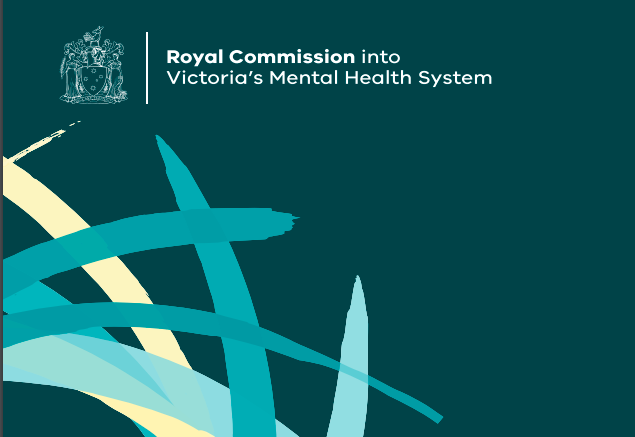 Our final report for #VMIAC2019 wraps the major recommendations from and responses to the Royal Commission, which will be of interest nationally as Australia considers wide-ranging reform proposals to provide better mental health care.

See at the bottom of the post too for analytics and links to our coverage of #VMIAC2019, and a full playlist of video interviews from the three-day event.

These steps are among nine urgent recommendations in the interim report of the Royal Commission into Victoria’s Mental Health System that was tabled in State Parliament on Thursday after nine months of consultations, roundtables, public hearings, surveys, and more than 3,200 submissions.

In its 680-page report (read a 28-page summary here), the Royal Commission found that Victoria’s mental health system, which it said was once admired as the most progressive in the nation, has “catastrophically failed to live up to expectations” and is “woefully unprepared” for current and future challenges.

It quoted one person’s view that it said resonated with all its hearings:

An often-repeated explanation is that the system has ‘cracks’ and that people will fall through them. I don’t know if [we were] just unlucky to continually step on those cracks, or if the cracks are so wide that you cannot avoid them.”

The report outlines in detail a system that is failing and in crisis: one key figure points out that Victoria Police had in 2017–18 attended about 43,000 events relating to a ‘psychiatric crisis’ or ‘suicide attempt or threat’, “amounting to a mental health callout about every 12 minutes”.

There is no question that the status quo must change.

One thing we have heard very clearly is that we are in the midst of a mental health crisis, that the system is failing and not meeting the needs of those who need it most. This must change.”

The Royal Commission’s interim recommendations are for:

But the Royal Commission has made clear there is much more to come in its final report due in October next year, saying that “transformational change is needed”. It said:

Our initial recommendations…do not fully describe the systemic changes that are needed. Instead, we have taken the opportunity of developing this report to recommend changes aimed at redressing urgent problems and preparing the ground for further reform.

Although the Commission is in the early stages of its reform work, what we can say is that well-resourced community mental health services—based on collaborative, multidisciplinary models of care—will be at the centre of a redesigned system.”

Premier Daniel Andrews promised to hold the Royal Commission into Victoria’s “broken” mental health system in the leadup to the 2018 election and said the interim report “shines a powerful light on the failings of a system that has let down Victorians and their families for far too long”.

His Government promised from the start it would implement “each and every one” of the recommendations – as it did with the Royal Commission into Family Violence.

It reconfirmed that on Thursday, while acknowledging there’s some work to be done on what type of tax or levy it will apply.

Both the Premier and mental health leader Professor Patrick McGorry, executive director of Orygen, who has played a key role in setting up the Royal Commission in Victoria, flagged the possibility of a national levy, including as something the ongoing Productivity Commission inquiry into mental health could or should be considering.

The Royal Commission report follows hot on the heels of the Productivity Commission’s draft report that was released late last month.

The tax/levy proposal also raised concerns for groups like the Victorian Council of Social Service (VCOSS) that the toll shouldn’t be felt more heavily by lower income Victorians, who are also more likely to be experiencing mental health pressures.

There’s also a question mark over whether the State Opposition will try to block the levy in the Upper House, where the government would rely on cross bench support.

While there is much reading to be done of the hefty Royal Commission report, the initial response has been warm from most stakeholders, except for deep disappointment from housing and homelessness groups that it makes no recommendation to address “the tragedy of the revolving door” for people exiting acute care, into homelessness, and back into acute care.

The state’s peak body, the Council to Homeless Persons, had urged the Royal Commission to acknowledge the critical role of housing in mental health, and to identify how much social housing and long term supported housing is needed to provide proper care to people recovering from mental illness.

It said the Royal Commission had revealed that more than one in six people who use public mental health services also access homelessness services.

But other groups commended the direction of the Royal Commission’s work, including the Victorian Aboriginal Community Controlled Organisation (VACCHO), which will play a key role in the creation and ongoing management of the new Aboriginal Social and Emotional Wellbeing Centre.

The report opens with an acknowledgement of the Aboriginal peoples of Victoria and the importance of Aboriginal leadership in improving outcomes, but also of “the devastating impacts and the accumulation of trauma resulting from colonisation, genocide, the dispossession of land and children, discrimination and racism”. It says:

The Royal Commission is conscious that its work is taking place concurrently with renewed efforts to achieve constitutional recognition of Aboriginal peoples and treaty processes that are underway in Victoria.

We commit to building on this momentum and to ensuring our work is shaped by the voice of Aboriginal people.”

In a statement, VACCHO says the Royal Commission has produced a report that “finally reflects and recognises the challenges faced by the Aboriginal community and our tireless work to support and care for our community with at times very limited resources and infrastructure”.

The report recognises what the Aboriginal community has been saying and fighting for over a very long time. 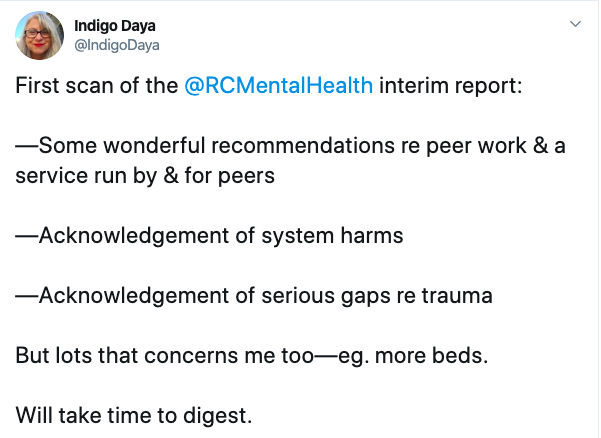 The peak consumer body, the Victorian Mental Illness Awareness Council (VMIAC), also says the interim report “has delivered welcome news”, despite early concerns that none of the four Commissioners had lived experience.

VMIAC has welcomed three recommendations in particular: social and emotional wellbeing support for Aboriginal Victorians, the residential service designed and delivered by people with lived experience of mental and emotional health issues, and the Lived Experience Workforce recommendation around improving career pathways, including learning and development processes in leadership positions.

The Interim Report validates what we’ve been saying and campaigning for over a long period of time.”

The carers peak body Tandem also said it was “thrilled” with the many innovative recommendations, “with specific recognition of the importance of supporting consumer and family lived experience workforce and providing alternative care options”.

The Royal Australian and New Zealand College of Psychiatrists was also “encouraged” by the report, welcoming new investment in mental health, immediate funding of more inpatient beds, an expansion of suicide prevention services and a greater focus on Aboriginal social and emotional wellbeing.

‘We are particularly supportive of the focus on an enhanced role for people with lived experience in the co-production of service design and delivery, which acknowledges their central role in establishing a more contemporary, humane, and fit for purpose mental health system,” it said in a statement.

The RANZCP Victorian Branch said psychiatrists were also pleased the report highlights the shortage and maldistribution of psychiatrists in the mental health workforce, particularly in rural and regional areas, the deficits in inpatients beds for people with complex needs, and the lack of treatment options for the ‘missing middle’ who do not meet the threshold for public mental health services.

But it warned that psychiatrists are exiting the public system “at alarming rates” due to broader problems within the system.

Mental Health Victoria welcomed the interim report and its emphasis on consumers, families and carers being at the centre of the design process for new services.

It echoed other stakeholders, including the Premier, in saying that “while the costs to transform our mental health system will be high, we know they will be an investment that delivers large economic returns to the state” .

The Australian Nursing and Midwifery Federation (Victorian Branch) welcomed the report as “game-changing”, in particular the boost to mental health funding and additional 170 adult and youth acute mental health beds within two years.

Orygen said it strongly supports the Commission’s analysis of the depth of the problems across Victoria’s mental health system and was pleased with its recommendation of a Victorian Collaborative Centre for Mental Health and Wellbeing, which has been “influenced by the ambition of the Orygen clinical model and the attention it has achieved nationally and internationally”.

Professor McGorry said the interim report placed significant emphasis on the value of interdisciplinary translational research to the development of the new models of care, service design and delivery that would be required to achieve the Commission’s recommended redesign of the mental health system in Victoria.

cohealth says the interim report shows the Commission is “on the right track for delivering real reform to a fundamentally broken system”. Chief Executive, Nicole Bartholomeusz welcomed the recommendation for a new mental health tax and said: “Bolstering the system via a new revenue stream will reduce the burden on emergency departments, police, the courts and social support services, and save taxpayers money in the long-run.”

She said more needs to be done integrate mental health care with multidisciplinary physical health care and social support services, a model such as that delivered within community health centres, and hoped this would be evidenced in the final report. 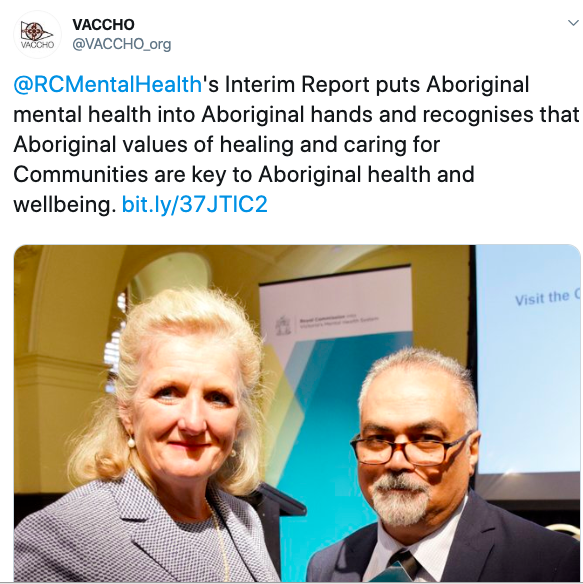 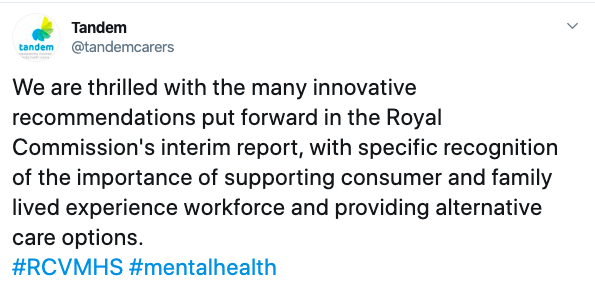 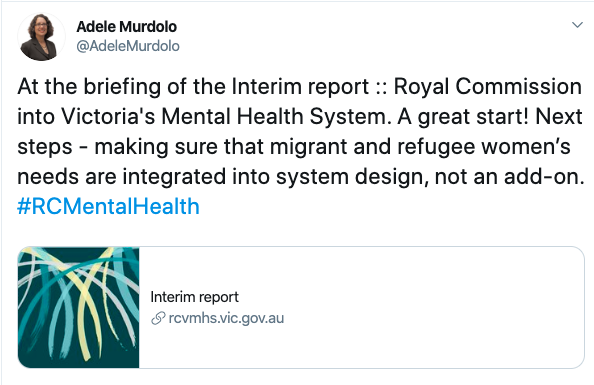 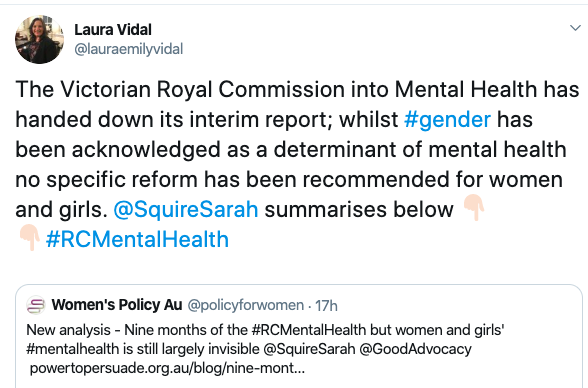 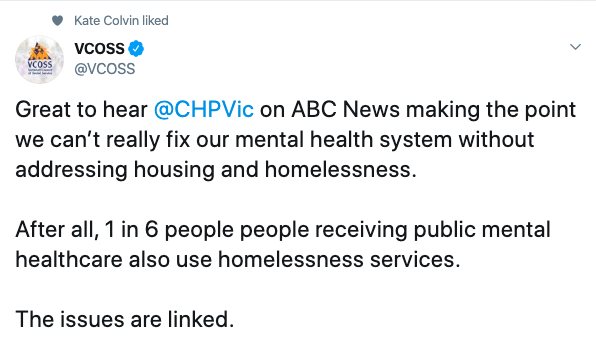 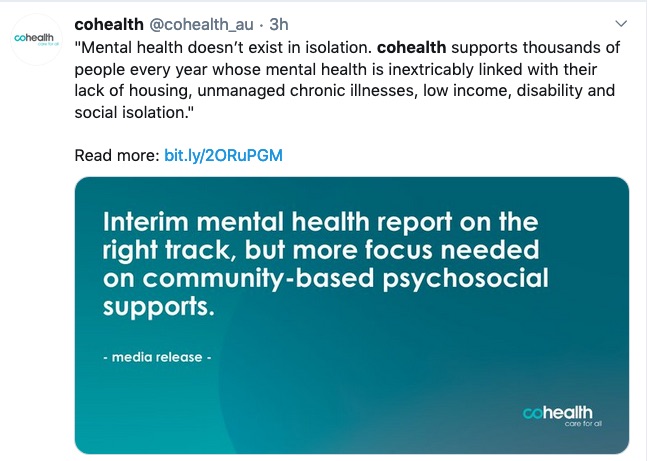 According to Symplur analytics, 171 Twitter accounts sent 1,835 tweets using the conference hashtag, creating more than 14 million impressions (during the period from 29th October to 26th November).

Watch all our video interviews

Watch this playlist of 10 interviews at #VMIAC2019, including with keynote speakers Matt Ball, Dr Daniel Fisher, and Elvis Martin, presenters Indigo Daya and Dave Peters, VMIAC leaders Maggie Toko and Tricia Szirom and from the newly formed National Consumer Peak Alliance. By 29 November, there were 2,312 views for the eight interviews broadcast live via the Periscope app.