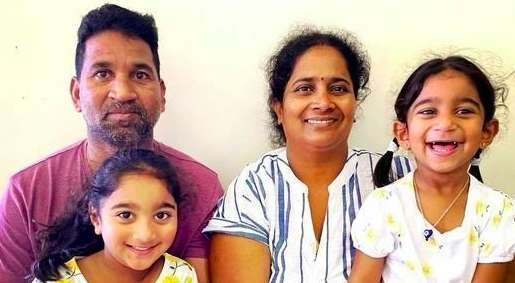 Tamil asylum seekers Priya and Nades Murugappan and their Australian-born daughters Tharnicaa and Kopika. Photo provided by friends of the family.

View from The Hill: the Morrison government has escape hatch in Tamil family case – if it wants to use it

The Federal Government could act, quickly and humanely and with little impact on its policies for closed borders, to free the Biloela Tamil family, writes veteran journalist Michelle Grattan, Professorial Fellow at the  University of Canberra, in this article originally published at The Conversation.

Foreign Minister Marise Payne said on Tuesday the government was considering two overseas resettlement options for the Biloela Tamil family, whose daughter Tharunicaa is in a Perth hospital after being medevaced from Christmas Island.

These were sending the family to New Zealand or to the United States.

It’s now said Payne was confused about where things stood. Nor had earlier comments that day by the Home Affairs Minister Karen Andrews been precise. In fact, the situation is clear as mud.

The family, whom the government wants to deport back to Sri Lanka, has been held on Christmas Island since 2019 while a legal battle over the handling of the visa application of Tharunicaa drags on. The parents have been found not to be refugees, but their two children were born in Australia.

It emerged on Wednesday that Immigration Minister Alex Hawke is currently considering a court requirement to look at the question of lifting the statutory bar preventing the family from applying for another sort of visa.

Such requirements are not unusual but it could give the government an escape hatch – if it wants one. Hawke has been a hardliner on borders, but it’s being noted he’s also the father of four children under six.

If Hawke lifted the bar, the family would presumably get a visa allowing them to return to Biloela.

If he doesn’t remove it, and Tharunicaa later won legal protection, the government could pursue resettlement in a third country.

But for it to try to dispatch the Murugappan family offshore, even to a nearby and welcoming place like New Zealand, would be an outrageous example of saving “face” at virtually any cost. It has already wasted millions of dollars of taxpayers’ money on incarcerating this family for years, just because it can, not because the national interest requires it. 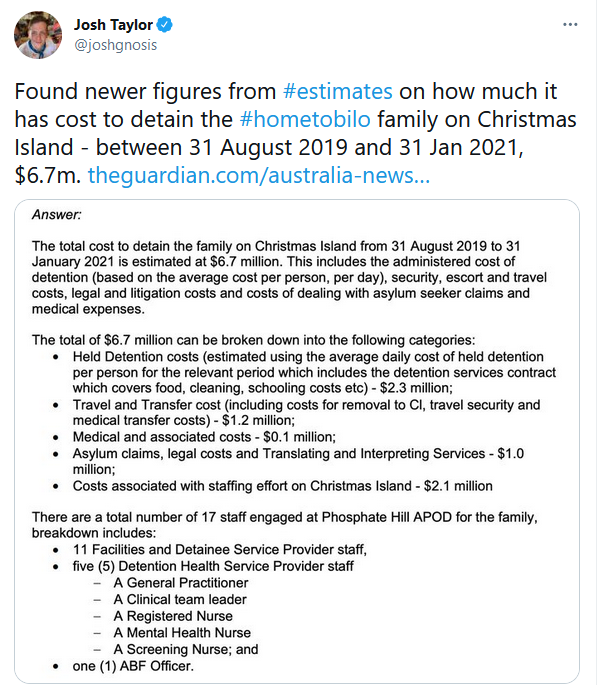 Obviously if the family were relocated to a third country, it would be infinitely better off than it is now.

But a government decision to take this torturous route rather than the simple one would be bizarre and frankly appalling. As has been the Murugappans’ detention for this long.

Read more: As a young child is evacuated from detention, could this see the Biloela Tamil family go free?

The argument that third country resettlement is necessary in this case for deterrence purposes, as part of protecting the border, is absurd.

The people smugglers are not about to snap back into action, assaulting our borders (that are proving impenetrable for many Australian citizens).

Anyway, in the unlikely event some people smugglers somewhere were energised, we can be confident the navy and Australian Border Force would be up to the challenge of dealing with the situation.

If the government took the logical course – to draw a line under the issue, and make an early decision on humanitarian grounds to send the family back to Biloela – what would be the consequence?

Yes, there would be a couple of days of “back down” stories. Not the end of the world for a government receiving extensive criticism over the more immediate issue of the vaccine rollout. Maybe some in the Coalition’s base mightn’t be happy but it’s hard to see them changing their vote.

There would be a relieved family, with the pause button on their lives released, and a happy local community.

And we could say that the values Australia is supposed to stand for had – at last, ever so belatedly – come to the fore.

Morrison and his government like to talk a lot about values. But it’s action that matters. One depressing aspect of this affair is the negative message it sends about Australia, which we want to be seen as a compassionate society committed to upholding human rights. And then there’s the message about the Liberals as a party.

Once, within memory, the parliamentary Liberal party had a strong, vocal and courageous band of small-“l” liberals willing to speak up for the decent treatment of people without protections, notably (but not exclusively) asylum seekers.

Ask John Howard, for whom the likes of Petro Georgiou and Judith Troeth, among a number of others, were sharp thorns in his side.

Where are the small-“l” liberals now? More or less an endangered species. Those that exist in the government’s most senior ranks – Payne would probably count herself as one – are rather like people who used to actively practise their religion but now have become nominal believers.

Payne, for example, was reluctant about receiving public praise for an initiative on foreign aid. She feared the “base” being upset.

It is possible cabinet ministers like Payne and Senate leader Simon Birmingham, also regularly named as a leading moderate, speak up in the government’s inner sanctum. If so, they make sure the door is not just closed but locked as well.

Read more: It’s time to give visas to the Biloela Tamil family and other asylum seekers stuck in the system

When Morrison meets US President Joe Biden during the G7 summit, he could inquire how the president is progressing with his effort to reunite families who (in the words of the US administration) “were unjustly separated at the United States-Mexico border under the prior administration”.

The process is slow and difficult. A report released this week indicated more than 2,000 children were waiting for reunions, and only a handful had been reunited so far.

It is a huge effort, with all sorts of policy ramifications and obstacles. Yet our government fiddle-faddles over the fate of a single family when, objectively, there are no complications.

PrevPreviousSurvey raises serious concerns about COVID vaccination rollout to prisons
NextBirthing on Country results prove the gap can be closed. Now such services need to expandNext