Among the stars at AIDS 2014, the 20th International AIDS Conference in Melbourne, were Bill Clinton, Bob Geldof and, perhaps lesser known outside HIV circles, Professor Françoise Barré Sinoussi, outgoing President of the International AIDS Society (IAS) and the Nobel Laureate who co-discovered HIV.

So Simoussi’s formal visit to the Indigenous Networking Zone during #AIDS2014 not only had people lining up for photos with her (see below, thanks to Clive Aspin) but sent a signal of support for efforts to put Indigenous issues higher on the HIV and AIDS global agenda. 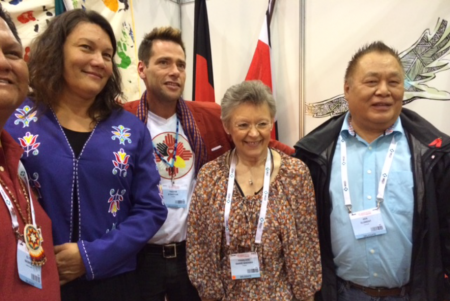 That had begun, she said, with the 2014 event: with an Indigenous Pre-Conference event affiliated with the main event for the first time and the first plenary address on Indigenous issues by an Indigenous person, Australia’s Associate Professor James Ward.

She said the way to put Indigenous issues alongside those of other “key HIV AIDS populations”  – men who have sex with men, people in prison, people who inject drugs, sex workers and transgender people – was for Indigenous people to work together with the others and bring their voice to the international society.

“It’s the way to go: the voice is coming from the Indigenous people themselves,” she said.

Australian Indigenous HIV campaigner Michelle Tobin agreed: “For the first time, it feels like we’ve been given a platform: we have a voice, and people are listening, we’ve been giving visibility as Indigenous people with HIV.”

See below for the formal farewell at AIDS 2014 from Maori researcher Clive Aspin, who was Global Village Rapporteur, and other news from both the Pre-Conference and AIDS 2014.

Indigenous peoples and cultures figured prominently in the Global Village. After 30 years of HIV and 20 international AIDS conferences, Indigenous peoples are laying claim to their rightful place at the table in addressing the impact of HIV on indigenous communities around the world.

With significant HIV disparities in many countries, and especially Canada, the Global Village provided clear evidence that Indigenous people with HIV are at the forefront of the fight to protect our human rights and to prevent HIV transmission within Indigenous communities.

Indigenous people on numerous occasions also called on the IAS and other international organisations to recognise them as a key population group affected by HIV, alongside other key affected groups, who continue to face stigma and discrimination, after more than 30 years of HIV.

We heard on Thursday from Laurindo Garcia, an HIV positive leader who told us that levels of stigma and discrimination experienced by people living with HIV and AIDS have increased in the two years since the Washington conference and this was reinforced here throughout the Global Village.

Sex workers too described ongoing discrimination and like other affected populations called on countries to recognise sex work as real work – and to decriminalise sex work so that sex workers might enjoy the same protection and rights as everyone else.

I attended a dynamic workshop in which sex workers from the Can-Do Bar in Chiang Mai in Thailand described how they had taken control of their own working conditions and how they provided innovative training in safe sex practices to both workers and clients.

We were reminded of the absolute importance of ensuring that sex workers are present at discussion and development of policy that impacts of their health and well-being and the condition in which they work.

In the many years that I have been coming to these conferences, this is the first time that I have seen such as strong and vibrant presence of trans people.

When it comes to stigma and discrimination, trans people, as well as women and men who have sex with men (MSM) living with HIV, continue to experience these to a far greater extent than anyone else.

Among the human rights abuses we heard about in the Global Village, we were reminded that they are often rejected by their families, they are denied access to anti-retroviral treatment, they are refused surgery, they are subjected to violence by authorities, and trafficking laws are used to restrict their travel.

Abuses such as these can only be eliminated through the repeal of bad laws and the implementation of good laws, initiatives that need to be supported and encouraged by the UN.

And we need to recognise the particular challenges faced by gender diverse communities, women who do sex work, women who inject drugs, women as mothers and caregivers.

Initiatives to promote the health of men in Arabic countries were highlighted in the Global Village. We heard about the launch of an exciting new initiative called M-Coalition that brings together networks across the Middle East and North Africa to fight discrimination and promote increased awareness of the needs of MSM in that region, a timely intervention to confront increasing rates of HIV among Arabic MSM.

The Main Stage of the Global Village hosted diverse and vibrant expressions of culture (see photos in this post), including from our neighbours to the north, Papua New Guinea –- from whom we heard about the particular challenges faced by people who live with AIDS and HVI, 85 per cent  of whom live in remote locations and have poor or no access to resources and treatment.

On numerous occasions we were reminded of the importance of working together in partnership with one another. The Indigenous peoples networking zone were honoured to host the President of the IAS who thanked and congratulated people on their achievements to date and reminded us all that we must keep on fighting, a message that applies to all people affected by HIV.

Finally, we need to remember that there are many people who have been living with HIV for many years and we need to celebrate the wealth of knowledge and experience that they bring to the struggle against HIV. There were many reminders throughout the Global Village of the contributions of people have been living with HIV since the earliest days of the epidemic. We need to learn from their experiences and celebrate their contributions.

As we prepare for the next Global Village in Durban in 2016, let’s not forget the sentiments of the Elders who welcomed us to country on Monday and who called on us to acknowledge and celebrate our diversity and learn from one another as we work together to overcome HIV.

Until we meet in Durban, go well, and let’s hope we can report action that will lead to a reduction in the stigma and discrimination faced by people and communities affected by HIV

Marie McInerney reports below on other news from the conferences:

The final report of the first Australian study on sexual health and drug use by 3,000 young Aboriginal and Torres Strait Islander people was released at the Pre-conference and provides new insights for emerging issues and gaps in services and also dispels some myths about Indigenous communities – urban, regional and remote.

It also underlines concerns about the growing number of HIV transmissions through injecting drug use among Indigenous people, with three per cent of participants reporting they had injected drugs in the past year and 37 per cent reporting the sharing of needles – “a much higher rate than reported in other Australian studies of people who inject drugs” – raising issues about drug use in regional areas particularly, and a lack of harm reduction services particularly around clean needle access. It found that meth/amphetamine and methadone were the most commonly injected drugs in regional areas and that the sharing of needles and other equipment there was higher than among urban participants.

The report found that overall knowledge among young people of sexually transmitted infection s(STIs) and blood born virus (BBV) transmissions were good, particularly around knowing that people can have STIs without any obvious symptoms (82 per cent) and that injecting drugs risked hepatitis C infections (84 per cent).

Of concern was a lower understanding of the complications of Chlamydia, such as the impact on fertility for a woman (60 per cent), that Hepatitis B can be transmitted sexually (57 per cent), and that using condoms did not make people safe from all STIs (62 per cent).

“War on drugs” a failure

AIDS 2014 saw high level urging for an end to the “war on drugs”, which Michell Kazatchkine, the United Nations Secretary General’s Special Envoy for HIV and AIDS in Eastern Europe and Central Asia said had “failed with disastrous consequences”, including a major health crisis.

It’s a call that has relevance in Australia, particularly in Indigenous communities where injecting drug use represents 22 per cent of Indigenous HIV infections compared to 2 per cent of non-Indigenous, and with Indigenous people more than 14 times more likely to be imprisoned.

Former High Court Judge Michael Kirby seized on comments made recently by Prime Minister Tony Abbott on 3AW (see clip below) that the war on drugs could never be won, though he noted that Abbott didn’t make the further inference that it should therefore be abandoned.

The AIDS 2014 session pointed to a growing trend to more effective social and health interventions on drugs, including the decriminalisation of cannabis in a number of US states, Jamaica and Ecaudor and “pathfinding” legislation in New Zealand to regulate psychoactive substances.

Populations and locations at risk

In one plenary session, Mark Dybul, Executive Director of The Global Fund to Fight AIDS, Tuberculosis and Malaria, spoke about the importance of targeting particular locations and populations in trying to end the HIV epidemic.

He referred to the UNAIDS Gap report, the first of its kind,  that analyses 12 populations at higher risk of HIV, and the reasons for the widening gap between people gaining access to HIV prevention, treatment, care and support, and people being left behind, and which says: “focusing on populations that are underserved and at higher risk of HIV will be key to ending the AIDS epidemic”.

Dybul said most plagues in history had been indiscriminate, hitting rich and poor equally.

“HIV is the discriminatory plague, it feeds on discrimination,” he said, leaving marginalised and vulnerable populations behind.

As a result, interventions had to go beyond the biomedical and address discrimination, including and particularly education for young women in developing nations.

The events showcased a range of programs and services that were helping to prevent HIV infection and to address stigma and discrimination, including:

• Tū Mai Takatāpui – designed by the New Zealand AIDS foundation to help whānau – Maori communities ­–  understand and support their loved ones who are coming to terms with their sexuality or gender identity.

Jordan Harris said the word Takatāpui (men who have sex with men) had nearly been lost to the Maori languae. Now 12 committees of Takatāpui work with tribes and elders across the country to work against stigma and discrimination.

Since 2010, New Zealand has seen a 20 per cent decrease in new HIV infections: “We’re doing something right,” he said.

• VACCHO launched its Deadly Sexy Health Kit at AIDS 2014, with a range of interactive tools for Aboriginal health workers including Myths and Facts, Safer Tattoo choices and Condom sequencing games, and the Yarning about Hep C DVD. 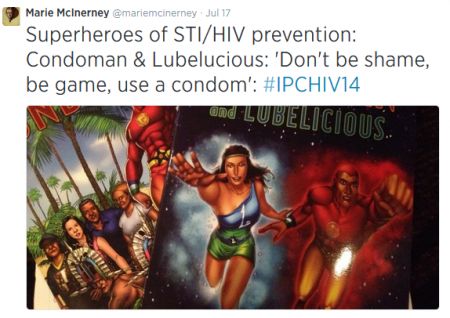 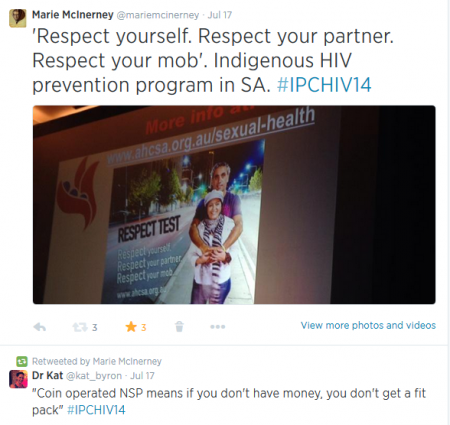 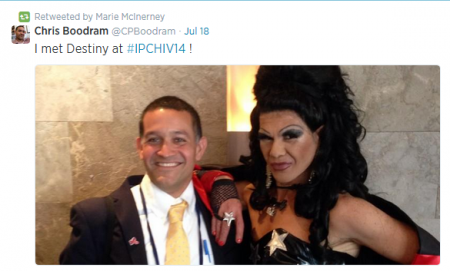 This post concludes Marie McInerney’s coverage of  the International Indigenous Pre-Conference on HIV and AIDS and the Indigenous sessions of AIDS 2014.

You can track Croakey’s coverage of the conference here.