WA backs away on “up to 150” remote communities to close, outlines process, but anger, anxiety continues

The Western Australian government has backed away from earlier statements that up to 150 remote Indigenous communities would be closed and promised that any change would be “gradual and incremental” – but it still expects a “significant” number to close over time.

The government’s plans for remote communities, which have caused great anxiety in communities and major protests across the country under the #SOSBlakAustralia banner, went yesterday from a drip-feed of information in the media and Parliament to a relative deluge.

Premier Colin Barnett and Aboriginal Affairs Minister Peter Collier yesterday issued their first formal statement on the plans (see it in full below), saying the government would be assessing the employment, education child protection and health care options available to Aboriginal people in remote areas “to determine how to ensure services were provided in the most efficient and effective way with less duplication and better coordination.”

Collier’s department has also published a range of fact sheets and other supporting information on the front page of its website (click on pic below).

Premier Colin Barnett’s concession that his past statements that up to 150 communities could close were “a stab in the dark” speaks to the way the issue has been handled and the distress it has caused across communities.

That anxiety is unlikely to be assuaged by yesterday’s announcements but at least there’s now a process and a promise to consult with the communities which up until now have heard to learn about the plans from the media. See Guardian Australia’s report on initial reactions, where Aboriginal leaders welcomed the announced review of the services to communities but said they needed much more detail and certainty for concerned residents.

Interestingly, while the statement notes that some communities have only only one house and one family (“That is simply not sustainable”), the website info notes that around 100 communities (including 69 that have no permanent residents) receive no direct government services. As this ABS snapshot explains, the population of a remote Indigenous communities can fluctuate dramatically due to social, cultural and seasonal factors. http://www.abs.gov.au/AUSSTATS/abs@.nsf/Lookup/4102.0Chapter9202008

According to media reports, Collier apologised for the dismay and alarm the prospect of closure had caused residents and said the reform was “nothing to do” with the loss of federal funding but part of a broader review the government had been working on for two years.

He told a news conference:

I’m sure that there will be some communities that will close. But that will be after enormous consultation with those communities. They will be empowered, for the first time they will actually be empowered to be a part of the process.

Redman was quoted in WA Today as saying that there would be a plan for remote communities within six months, “significant change” within five years, and “transformational change” within a generation. It reported:

He said it was not the intention to force Aboriginal people to choose between a connection to country and being part of a modern economy and while he did not expect the reform to be all “smooth sailing”, he did expect to come up with a plan that indigenous people supported.

Barnett first raised the closure proposal last November, but five months later the government had yet to consult with key Aboriginal advisors, much less the communities themselves.

The government first raised the issue as a financial and federation one, after the Federal Government shifted responsibility to the States to fund essential services  to the communities but it has also warned increasingly of social outcomes and abuse and neglect of young children that are “a disgrace to this state”. Yesterday he told media that access to education was a “not negotiable” factor.

Here’s the full statement issued by Barnett and Collier:

Reform to improve the lives of Aboriginal people

The State Government today announced major reforms to the way services will be provided to Aboriginal communities to ensure better outcomes in health, education and job prospects, particularly for children.

Premier Colin Barnett said the era of billions of dollars being spent, with few improvements in the lives of Aboriginal people, had to end.

A State Government review of Aboriginal services in the Roebourne area in 2013 found there were more than 200 services delivered by 63 providers to 1,410 people. These cost more than $58 million a year but there was little evaluation of how effective these services were.

“This is a commitment to ensuring children are safe, that there are education and employment opportunities and social and economic stability in remote communities,” Mr Barnett said.

“We will identify communities that are working well and will continue to invest in services that are effective and provide the best chance of positive outcomes.

“It is not the Government’s intention to force people off their land or to prevent them having access to country but it is essential that Aboriginal children are safe and are going to school.”

Aboriginal Affairs Minister Peter Collier said the Government would assess the employment, education, child protection and health care options available to Aboriginal people in remote areas to determine how to ensure services were provided in the most efficient and effective way with less duplication and better co-ordination.

“This is a long-term plan that will be put in place in close consultation with Aboriginal communities and local governments. That consultation process starts within weeks,” Mr Collier said.

“There are about 12,000 Aboriginal people currently living in 274 communities in Western Australia, some with only one house and one family in them. That is simply not sustainable.”

Reform will be led by Child Protection Minister Helen Morton, who will oversee human services and Regional Development Minister Terry Redman who will oversee remote infrastructure and development.  Both Ministers will report to the Aboriginal Affairs Cabinet Sub Committee, chaired by Mr Collier.

The Premier said the Government was prepared to spend more on improving opportunities for Aboriginal communities, with funding allocated through Royalties for Regions and departmental budgets.

A new reform unit will lead the changes, and in the coming weeks the Government will call for nominations from Aboriginal leaders to join Regional Strategic Advisory Councils for the Kimberley and Pilbara, which will act as a liaison between government agencies and local communities.

District Leadership Groups will also be formed with Aboriginal service organisations, local councils and relevant State agencies to engage locally with community members, and decide which services will best assist their communities.

The reforms will initially focus on the Kimberley and Pilbara.

There are about 12,000 people living in 274 remote communities in WA

$4.9 billion in State and Australian Government funding is spent on WA’s Aboriginal population each year 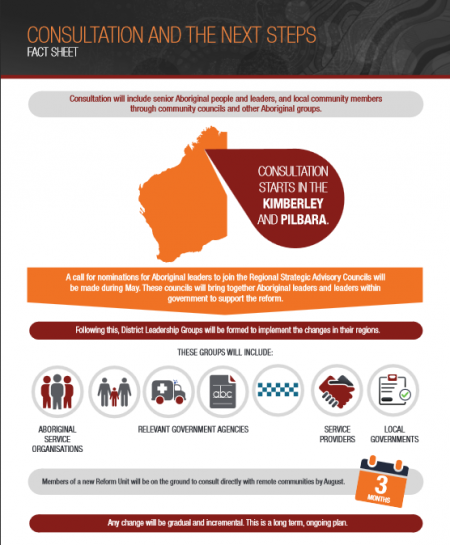 And more information about location based expenditure review findings for the Roeburn and Martu communities, referenced in the statement (click twice to enlarge): 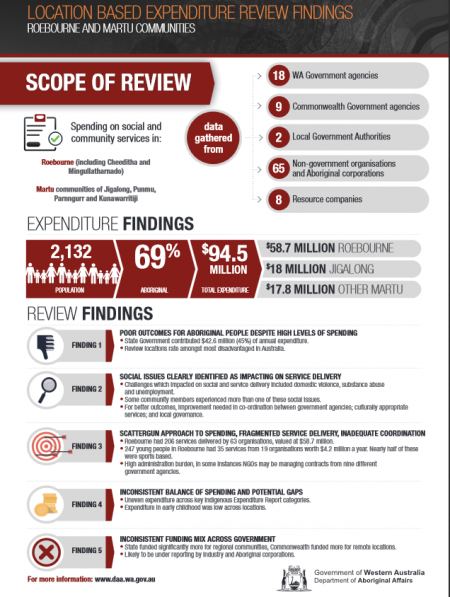 See also this Op Ed in the Herald Sun from Nyunggai Warren Mundine, chair of the Prime Minister’s Indigenous Advisory Council on the closure proposals: Lift the shackles and remote communities will thrive

PrevPreviousUsing a systems approach to tackle obesity: insights from the UK
NextWill we add more years to our lives? The flawed longevity assumptionNext