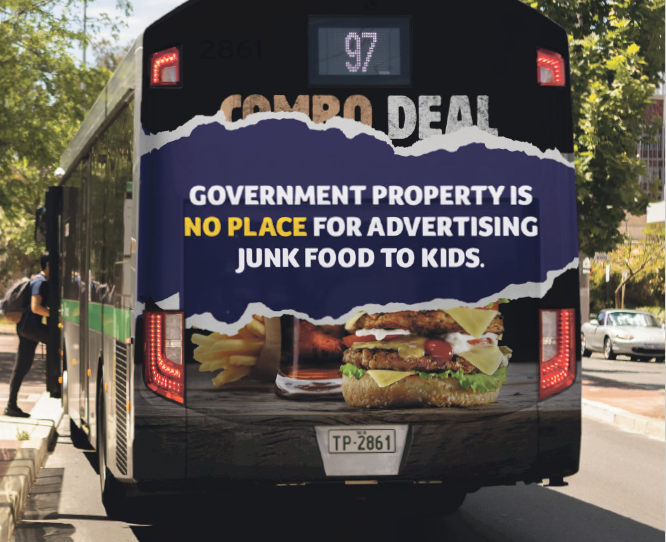 Western Australian health groups are calling on the State Government to put an end to junk food advertising on public transport, billboards and sporting venues.

As the ABC reported today, they have released a new report which says it will not only improve people’s health but will help save the State Government hundreds of millions of dollars over the next decade in the fight against obesity and other chronic diseases.

In the article below, Kelly Kennington and Ainslie Sartori from the Cancer Council Western Australia and Kathryn Backholer from Deakin University’s Global Obesity Centre outline the findings of the report which they say makes the case for governments in the face of industry lobbying against advertising restrictions, which looks to have watered down an earlier bid by the Queensland Government to take strong action.

In a united show of strength, health agencies such as Cancer Council WA, the Telethon Kids Institute and the Australian Medical Association took out a full page advertisement in The West Australian newspaper today, urging the Western Australian Government to act without delay.

This coincides with the release of a  report – Unhealthy food and beverage advertising in outdoor spaces and on publicly owned assets: a scoping review of the literature — by Cancer Council WA and the Telethon Kids Institute.

It  shows that restrictions which  aim to protect kids from exposure to unhealthy food marketing are not only feasible, but are likely to improve health outcomes.

Obesity-related costs to the Western Australian health system are expected to sky-rocket in future years, reaching an estimated $610 million annually by 2026.

Yet  State and Territory governments across Australia continue to sell advertising space to promote the very foods and beverages that make us sick.

Junk foods and drinks from companies such as McDonalds, KFC, Hungry Jacks, Pepsi, Coca-Cola, V, Mother and Red Bull are incessantly marketed to us and our children in ways that insidiously influence our attitudes, preferences and consumption of their products across the life-course.

It’s no coincidence that much of this advertising is placed where children go about their daily routines. Advertising is clustered near schools, at train stations, near junior sporting venues and even on the buses that take our kids to school.

Children are particularly vulnerable to the influence of food marketing as they are less aware of the selling and persuasive intent of advertising compared to adults.

The call to put the health of our children before profits is not new.

Similar policy recommendations have been made in the WA Preventive Health Summit 2019 Summary Report, the Final Report of the Sustainable Health Review 2019, the Food Policy Index Progress Update 2019 and the World Health Organization’s recommendations on the marketing of foods and non-alcoholic beverages to children.

It provides evidence-based counter points to the arguments used by the food and advertising industries to oppose such policies.

Key results from the report include:

The report is a game-changer for other jurisdictions, who are watching Western Australia  closely to ensure any policy proposal does not suffer the same fate as the Queensland Government’s attempt to protect children from unhealthy advertising.

In 2019, the Queensland government approved a policy that would see unhealthy food and drink advertising banned on government assets.

The announcement was criticised in the media by the outdoor media advertising sector, which complained that their industry would lose revenue, that unhealthy foods were too hard to define and implementation would be too problematic, and that they were being targeted as “low hanging fruit”.

From the tobacco industry’s playbook

Public health experts were concerned when a watered down policy was issued for a second targeted consultation to select stakeholders, including the Obesity Policy Coalition.

Gone was the mandate for the removal of unhealthy food on government assets and instead, the policy was realigned to focus on foods that should be allowed to be advertised.

Policy makers would argue that if the policy objective is to remove unhealthy food advertising, then these are the category of foods that must be defined in the policy.

The revised policy attempted to define ‘healthier foods’, however many of the foods suggested as approved products were not recommended by the Australian Dietary Guidelines.

This sudden shift in language was surprising, given the availability of the COAG Health Council’s national interim guide to reduce children’s exposure to unhealthy food and drink promotion which was developed for this very purpose – for Governments to use to define the foods that cannot be advertised.

The revised proposed policy sent to stakeholders also permitted exemptions for the advertising of children’s meals sold in quick service restaurants if they met generous nutrient criteria, which meant the policy failed to restrict marketing of the very products the policy was originally trying to regulate.

Also permitted in the revised policy was the inclusion of master branding (for example, advertising that showed a brand without a product), enabling companies to continue fostering brand loyalty and signage directing people to food outlets.

Finally, the policy included references to the industry’s own quick service restaurant code and definitions in the policy, rather than evidence based definitions and guidelines.

Some nine months later, the fate of the policy is still unknown, with all references to the original policy, and the subsequent stakeholder consultation removed from the Queensland Health website.

During the process, the OMA scrambled to offer a voluntary compromise to the Queensland government, and tried to gain support from health agencies that advocated for the original Government policy.

The OMA suggestion was an industry-led policy to restrict advertising for discretionary food and drink products within 150 metres of schools.

Sensing public health momentum to the contrary, they moved swiftly in February 2020 to release what they billed as a ”world first” OMA Health and Wellbeing Policy.

The supporting policy documents used imagery, logos and text that implied the endorsement of public health experts and Australia’s leading health agencies and campaigns. Outraged, health groups acted quickly to demand the OMA remove references to their agencies, and the campaign and policy materials were subsequently edited.

The OMA activity is straight from the tobacco industry playbook. Unsurprisingly, opposition to policy interventions by the food, media and advertising industries was also identified in the report released today as the greatest challenge to policy adoption.

Australian State and Territory governments are now armed with evidence that counters each industry argument and leaves no excuse for ignoring the strong recommendations by public health experts.

The report also highlights the importance of collaboration and coalitions between public health agencies, backed by strong and influential political leadership and championing.  For example, in London, the Mayor of London was the political champion, Public Health England and other NGOs played a large role in public sector lobbying and advocacy, the Greater London Authority and Transport for London drafted the policy, Transport for London implemented the policy, London boroughs and the London Food Board provided general policy support and local universities were responsible for policy evaluation.

Whilst the food and advertising industries are a formidable force against regulation, the health groups that have signed up to call for a Western Australian policy are undoubtedly more formidable, more powerful and more organised in our methodical and evidence-based approach to build the case for this important reform.

It’s now up to the Western Australia government to show leadership, to put health before profits, and to drive this policy agenda forward, paving the way for other States and Territories to follow suit.

PrevPreviousUnderstanding health literacy among young Aboriginal men and boys in the NT
NextNo, a hug isn’t COVID-safe. But if you have to do it, here’s what to keep in mindNext