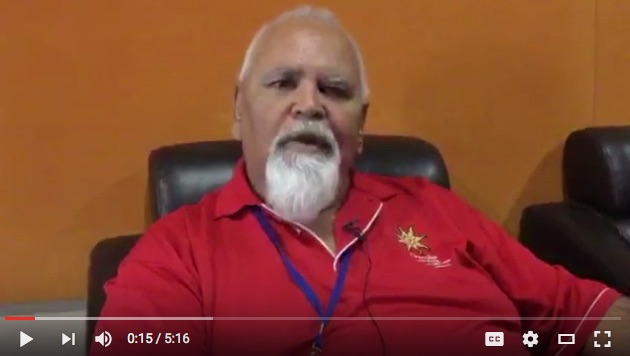 At the inaugural Aboriginal and Torres Strait Islander Suicide Prevention conference in Alice Springs, Summer May Finlay conducted a number of Periscope interviews with conference participants and speakers. Please watch them below.

The post also includes her video-reflections on day one and at the conclusion of the conference.

JD, a 40-year-old Indigenous trans man, says the conference has been hugely important, showing the amazing work being done in communities. It has been vital for exchanging ideas and creating action, he says. Understanding your identity and having a sense of belonging and connection are vital for helping to keep people alive, he says. He also urges people to be gentle and kind to each other, to be supportive and open-minded and “to recognise that small things can effect big changes”. He adds: “If people reach out to you, please don’t turn your back.” Follow him on Twitter at @JayDelaneyau. Read more here.

Joe, a Wiradjuri man from Wagga Wagga in NSW, describes his history of bipolar disorder, his recovery plan (including healthy eating, exercise and lifestyle), and how he uses his sporting profile to share his story widely with the community as part of healing work with his charity, The Enemy Within. He also describes the impact of colonial oppression, discrimination and racism upon mental health and wellbeing. Read more about his work here, and follow on Twitter: @joewilliams_tew

Tauto Sansbury, a Narungga Elder from South Australia’s Yorke Peninsula, is attending the conference to find some solutions to take back to SA, “to start a different conversation”. He highlights the harmful impacts of incarceration, loss of country, and loss of self-determination, and also describes the expertise of Aboriginal and Torres Strait Islander people and communities. “I think government should hear what the people are saying,” he says.

Ken Riddiford, CEO of the Kimberley Stolen Generations Aboriginal Corporation, describes the impacts of transgenerational trauma in Stolen Generations people. This conference is important because of its focus on preventative strategies for youth suicides, he says. He describes the important role his own grandmother played in his own development as a youth, in keeping him away from harms such as drugs and alcohol.

Richard Weston, a descendant of the Meriam people of the Torres Strait, says the conference is “super important”, and stresses the importance of  urgently addressing the suicide crisis facing some communities. He says: “We know from our work that much of the distress for Aboriginal and Torres Strait Islander people today is generated by the trauma of Stolen Generations policies and colonisation. Our work is about working with communities to address trauma through cultural healing.” Locally designed and led healing and prevention strategies are important for breaking the cycle of crisis and to prevent suicides, he says. He also describes the intellectual power, wisdom and cultural strength of those contributing to the conference organisation and presentations. He distinguishes between “Government” and “bureaucracy”, and says Government may be challenged by the notion that Aboriginal and Torres Strait Islander people have solutions embedded in their knowledge and culture. “They need to change the system, to tackle the processes of policy making and the processes of engagement…If we don’t have that, then we won’t see successful outcomes,” he says. “If Government doesn’t get the message, then we will get more of the same – half baked ideas…” he says.

John Paterson, chief executive of the Aboriginal Medical Services Alliance NT (AMSANT), says the conference is about hearing from other service providers and organisations facing similar challenges in their own communities to see what may be working, and to enable collaboration among those trying to address and prevent suicides. He hopes that conference participants can develop an agreed approach forward, to steer away from duplication of services, to identify any gaps, and to continue supporting useful programs and services while learning from them. He urges anyone contemplating self-harm to pick up the phone, ring a friend or family member or someone they trust to seek support. “Don’t think that you are alone,” he says. Aboriginal communities are about sharing and caring and looking after everyone in the community, he says.

Reflecting on the first day of the conference, Summer May Finlay says solutions must be driven by Aboriginal and Torres Strait Islander people. Governments need to understand that if they want to make a difference, she says. Coming to this conference shows how strong we are as peoples. “I really wish people could see us as I see us,” she says. “We’re strong, passionate, driven people that really are a hell of a lot more than the crap that we have to put up with. These conferences and hopefully the interviews that I’ve done demonstrate to people that we are knowledgeable, we are able to actually work on our own solutions, and we just need to be given the time, the money and the space to do that.”

Vanessa Lee says the conference has been empowering, in bringing together people from the same historical background with shared experiences of colonisation, including of oppression, inequality, and discrimination. She presented at the conference on “Domestic Violence, Suicide and Aboriginal and Torres Strait Islander LGBTQI”, and talks about the need for Aboriginal and Torres Strait Islander suicide prevention to be inclusive of sexually and gender diverse people. “Let’s stop the suicides, let’s stop the domestic violence,” she says.

Indi Clarke, 23, is a Muthi Muthi and Lardil man, currently employed with Mallee District Aboriginal Services  in Mildura in north-west Victoria, as a Youth and Community Engagement Facilitator. He loves his role, working with his community and giving back. His work includes mentoring, work experience, cultural awareness and emerging leaders programs. He describes the negative stereotypes around Aboriginality, which should instead be seen as an “amazing thing”. He promotes the positives to youth and the community. He is part of the National Empowerment Project. “Mental health is something that touches us all,” he says. He looks to family and friends when feeling overwhelmed himself. “Some people don’t have that, and we’ve got to provide those opportunities for those guys,” he said. He was part of the panel on racism, and would like to see a recommendation for governments to address racism, including in their own backyard, for example through doing Acknowledgement of Country in Parliaments.

Scott Avery, the Policy and Research Director at the First Peoples Disability
Network (Australia), talks about the importance of capturing the narratives and lived experiences of Aboriginal and Torres Strait Islander peoples with disability. Disability is largely invisible in many social policy areas, including in suicide prevention. The conference has shown the complexity of issues involved in Aboriginal and Torres Strait Islander suicide prevention, and that governments aren’t well organised to respond to this issue. On Twitter, follow @ScottTheHolWrld.

At the end of the conference, Summer May Finlay reflects on a “long couple of days” and her feelings of vulnerability during some of the heart-breaking discussions. The take-home message from the conference is the power of the collective to make a difference, she says. “I just wish…that Government would see us for our strength, and sit up and pay attention.” Suicide and self-harm are a symptom of larger issues, she says, and we need to not be working in silos but need to work across sectors such as health, justice and education. She says: “I’ve spent the last couple of days with some amazing people who have so much strength, despite having gone through so much. If we could just harness that strength and work with Government, we could do so much more than we are now.”

Summer May Finlay is reporting on #ATSISPEP for the Croakey Conference News Service. Her expenses for attending the conference have been covered with a bursary and she will also be presenting on Croakey’s #JustJustice project. We also acknowledge and thank Frank Meany of OneVision for his donation to cover Croakey’s editorial production and design costs associated with conference coverage.