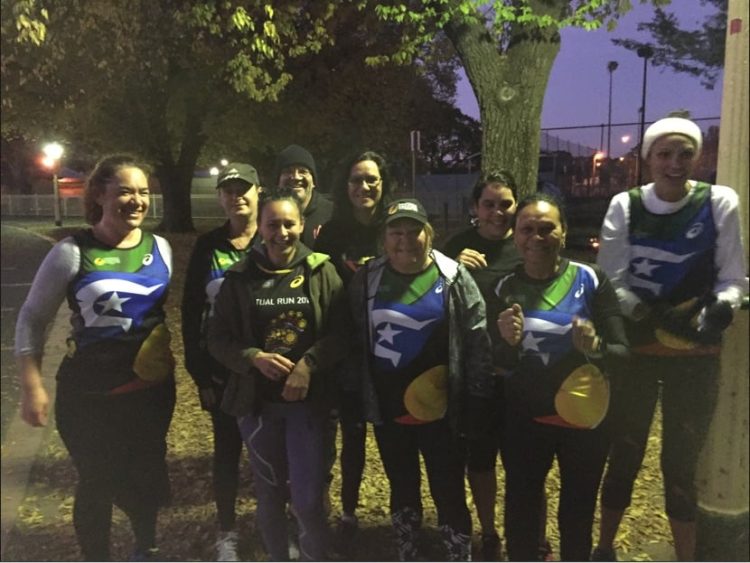 In action early on #IHMayDay17 - the Queanbeyan Deadly Runners

With the sun just rising in the background, Professor Peter Radoll and Aunty Annette Christou, 62, open #IHMayDay17, talking about why they get up so early three times a week – “rain, hail, shine, snow, whatever” – to go running together. They are members of the Queanbeyan Deadly Runners, founded by Aboriginal woman Georgia Gleeson after being selected for Rob de Castella’s Indigenous Marathon Project. Now there are Deadly Runners groups across the country, looking to keep fit and healthy and to enjoy the fun and social benefits of running in a group.

Radoll talks also about the need for a national Indigenous university student mentoring scheme to address “appalling attrition rates” among Indigenous students, whose completion rates are around 47 per cent versus about 70 per cent for non-Indigenous students. He said he has benefited from having mentors since he was an undergraduate student. He also advocates for Aboriginal and Torres Strait Islander academic staff, that their time on institutional committees as Indigenous representatives is counted in their performance agreements.

Brad Moggridge, from the Kamilaroi Nation in northern and north-west New South Wales, talks about his research at the University of Canberra into Indigenous knowledges and water management, where he is examining the Australian context as well as international best practice.

He discusses the challenges in validating Indigenous knowledges within the constraints of Western science, the need for more Aboriginal and Torres Strait Islander people to work in science, and how his passion for science is driven by its power to influence policy and the way we manage the landscape. Read more here: https://kini.waterpartnership.org.au/…

With #IHMayDay17 tweets rolling on a screen in the background, Mr Wayne Applebee, an Elder and PhD researcher at the University of Canberra, and Professor Peter Radoll discuss the far-reaching effects of over-incarceration on the lives of Aboriginal and Torres Strait Islander people – including exclusion from employment and education that can amount to a “life sentence”.

Applebee talks about the promise of programs like restorative justice and Justice Reinvestment, which invests in communities to prevent crime and intersections with the justice system rather than funding spiralling prison numbers. Hear more from him via the #JustJustice project at Croakey.

The #IHMayDay17 moderators discuss key themes, discussions and their takeaways from this year’s 16- hour program, co-hosted on Ngunnawal country by the University of Canberra, in conjunction with Croakey.

In this #IHMayDay17 preview, guest tweeter Richard Weston, CEO of the Healing Foundation, interviews his mother, Mrs Thelma Weston, 81, about her long career in health.

Mrs Weston now manages the needle syringe program and is the administration receptionist at the Winnunga Nimmityjah Aboriginal Health Service in Canberra, and is a board member of the National Aboriginal and Torres Strait Islander Health Worker Association.  She is a staunch advocate for Aboriginal Health Workers and the community controlled sector, concerned also governments often pull the funding rug from under effective health programs.

Richard Weston reflects on the powerful lessons his mother gave him, including a focus on education. “You’ve been the rock and the glue that’s held us together over many, many years,” he tells his mother during the interview. (Read more in this #IHMayDay17 preview article).

Click this link to see all the Croakey stories related to #IHMayDay17.

PrevPreviousIHMayDay17: Indigenous representation in action
NextSelling your health message on Facebook: insights from an insiderNext