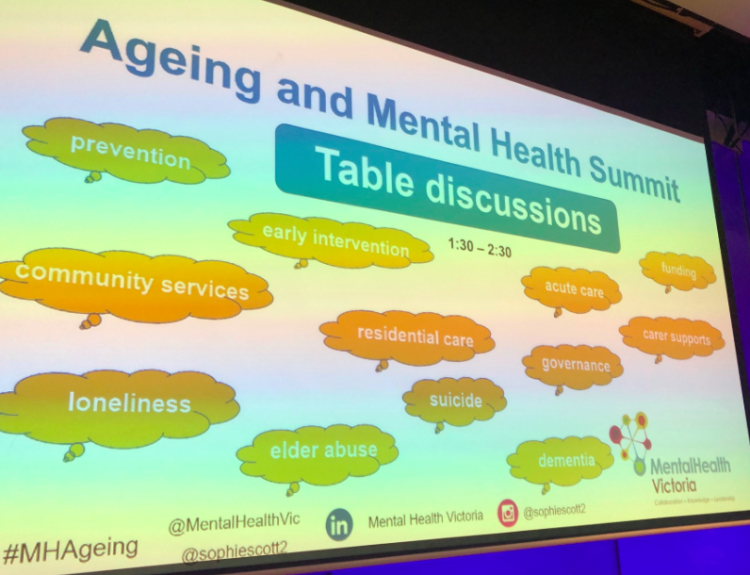 There’s growing concern that the mental health needs of older Australians struggle to get onto the health reform agenda and that their informal carers – family and friends – are also “invisible” in the system, and at risk as they age of moving “from carer to client”.

Many of these issues and some solutions were highlighted at a recent Mental Health and Ageing summit hosted in Melbourne by Mental Health Victoria, the state’s peak body.

Marie McInerney covered #MHAgeing Summit for the Croakey Conference News Service. Below are interviews with a number of key speakers from the event.

On isolation, loneliness & experiences of the mental health system

Gerard Mansour, Victoria’s first Commissioner for Senior Victorians and its Ambassador for Elder Abuse Prevention talks about his role, a first in Australia, and outlines the findings of workshops he recently held with mental health consumers and carers to get a sense of what’s it like to be engaged in the Victorian mental health system from an older person’s perspective.

Professor Marita McCabe from Swinburne University is leading the Resident at the Centre of Care Program, funded by the National Health & Medical Research Council, which is being rolled out at 39 residential aged care centres after a successful trial at nine.

She talks about how it came about – because aged care staff were doing training programs in better care and reduced reliance on medication to manage behavioural or mental health issues, but not given the agency or permission to change the way they worked. McCabe says it is showing great promise, allowing aged care residents to express wishes and preferences and build relationships with their carers, and all at little extra cost.

“We don’t talk enough about rights”

“How do we support people to continue to exercise autonomy and self determination as they age and to be listened to and heard?” That is at the heart of concerns about older people and mental health for Victoria’s Public Advocate Dr Colleen Pearce, who warned that people become “more invisible” as they age in our society.

She told the summit that it’s critical to ensure the human rights of older people are respected, and that particularly needs to happen in residential aged care, where we see an “over-reliance on medications to control behaviours that aren’t necessarily related to a psychiatric condition”. She is calling on the Federal Government to introduce an oversight mechanism on so-called ‘chemical restraint’.

“The mental health system relies very heavily on informal care even though it doesn’t acknowledge it.”

Marie Piu, CEO of Tandem, Victoria’s peak body for carers of people with mental illness, told the summit that the contribution of carers is estimated to be valued at $3 billion a year, but they are largely unsupported and often “completely excluded” by the mental health system

Tandem has assisted nearly 130 families to make submissions to the Royal Commission into the Mental Health System in Victoria, and its submission highlights four priorities: 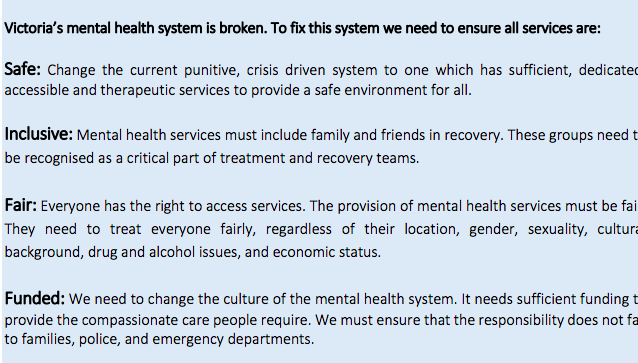 “Awareness is being raised”

He believes there is enough goodwill in the sector and government to ensure the respective inquiries “will be collaborative and dovetail into each other appropriately”, and that events like the summit help to explore and amplify relatively new discussions on mental health for older Australians.

“Awareness is being raised: that’s the beginning of creating good policy responses both within government and within the service system,” he said.

You can watch all the videos above via this #MHAgeing playlist. All interviews were originally broadcast live via Twitter’s Periscope app, where they had been watched by 320 viewers as at 5/8/19.