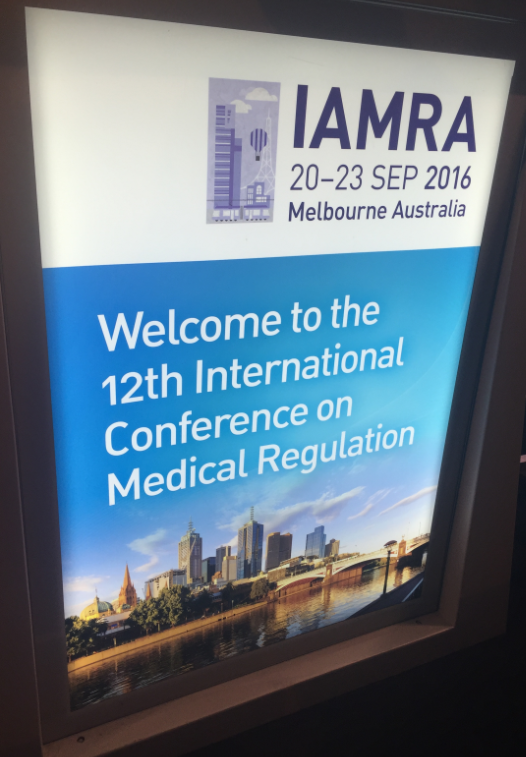 You can watch Croakey’s interviews with some of the presenters and delegates at the conference in the post below and track our coverage of the conference here.

Dr Vivian Lin talked to Croakey about the global and regional challenges in medical regulation, with a focus on social, political and cultural issues across the Western Pacific region.

Lin is Director of Health Systems at the World Health Organisation’s Western Pacific Regional Office. She said the region needs a “paradigm shift” in medical regulation to face big challenges on the “demand side” (including a rapidly ageing population and non-communicable disease “crisis”), undeveloped primary care, issues with traditional healing, and a tradition of respect for authority that can stop poor practice being addressed.

Here’s our conference report on the session where she spoke.

Dr Gyikua Plange-Rhule from the Medical and Dental Council of Ghana talks about the issues facing regulators in her country, including traditional healing concerns and workforce shortages that mean rural communities think ‘it’s better to have a bad doctor than no doctor at all’.

A paediatrician who studied law after getting involved in medical regulation, she said that if she had a bucket of money, she would spend it on better medical education and lifelong professional development.

The in-depth study, that has already informed change at the Australian Health Practitioners Regulation Agency, found consumers who lodged complaints about doctors were generally unhappy about the process because they were seen and treated as an “informant” rather than a participant with a stake in the outcome, including bringing about broader system improvement.

You can also read our story about the research.

Canadian regulator Dr Heidi Oetter, Registrar of the College of Physicians and Surgeons of British Columbia, talks about the implications for medical regulation of Canada’s landmark Supreme Court ruling that legalised medically-assisted deaths. She also discusses medical regulation in relation to cultural safety issues in health care for the First Nations, Inuit and Métis people of Canada.

Dr Margaret Mungherera is Vice Chair of the Uganda Medical and Dental Practitioners Council and former President of the World Medical Association, the first African woman to hold the position. In that role, she helped to fight moves by Uganda’s President to force doctors to inform on gay patients.

She talks here about the range of social, political and cultural challenges in Africa for patient safety and sustainable health care. Dr Mungherera was elected the chair-elect of the International Association of Medical Regulatory Authorities, to take up the role in 2018.

You can also read our story here on the global challenges session at which she presented.

Quickchat: Kieran Murphy, Past President of the Medical Council of Ireland, talks about regulatory issues in Europe, Ireland and the UK, and a session he chaired on ‘health, impairment and fitness to practice’.

Quickchat: Kathleen Haley, Executive Director of the Oregon Medical Board, talks to Croakey after addressing a plenary session on ‘What keeps me awake and the challenges ahead?’ She talks about what her Board has done to try to “hear the stories” of patients in some complaints processes, sparked by a wake-up call when one practitioner sexually abused 100 patients.

Quickchat: Incoming chair of the International Association of Medical Regulatory Authorities (IAMRA) Dr Humayun (Hank) Chaudhry, a gradulate of the Harvard School of Public Health, talks about his priorities for medical regulation.

You can bookmark our coverage here.

PrevPreviousTowards proactive medical regulation – preventing fires as well as putting them out
NextJust imagine this: the scale of the shake-up required to put health equity at the heart of researchNext