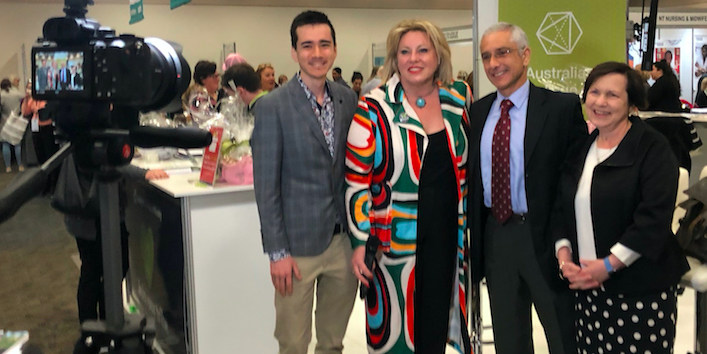 The Australian College of Nursing (ACN) 2019 National Nursing Forum last month shone a spotlight on the work of nurses across Australia, celebrating success and innovation but also highlighting barriers that they say prevent best practice and contribute to inequities in access to and outcomes in health care.

Journalist Marie McInerney covered #NNF2019, which brought together more than 600 nursing leaders from across Australia to nipaluna/Hobart.

Below you can watch interviews with keynote speakers, presenters and delegates that were originally broadcast live via Periscope and have logged more than 3,000 views to date.

You can also catch up on our #NNF2019 stories here.

Getting a seat at the table (and in Parliament)

Digance told Croakey the landmark legislation to protect remote nurses was, for her, “unfinished business” until it was rolled out across Australia.

In her keynote address, she urged nurses to get more involved in policy and politics, asking them to imagine waking up after the 2022 federal election to the news that a #WeCare movement powered by Australian nurses and midwives had stormed Parliament to create a new power base that put “people before politics, policy before power”.

She talks here about barriers for nurses to influence change, including many stereotypes, and offered tips for engaging with politicians: “You may not have success straight away…(but) have the courage to say I know I’m right, this has to change.”

“We need to be louder”

"We need to be louder": Assoc Prof Georgina Willetts #NNF2019

Another keynote speaker, Associate Professor Georgina Willetts spoke about the future of nursing from a unique historic perspective: four Florence Nightingale trained nurses founded the profession in Australia at the behest of  Willetts’ great great grandfather Sir Henry Parkes, the ‘Father of Federation’.

In the interview, Willetts urges nurses and the broader health community to better value their unique roles, skills and insights, including those gained through so-called “body work”, which is so often maligned but is “at the heart of the trust” between nurse and patient.

“I think time has come now where we need to step forward…to really have our voices heard. I think that will be beneficial to all of health care,” she said.

You can also listen to this ABC Radio interview with Willetts, who delivered the 13th Henry Parkes Oration in 2015 on: From Nightingale nurses to a modern profession: the journey of nursing in Australia

Melanie Robinson, CEO of the Congress of Aboriginal and Torres Strait Islander Nurses and Midwives (CATSINaM), gave a wide-ranging interview after her keynote address, talking about truth telling, the Uluru Statement, and the “disappointing” focus that international nursing is placing on Florence Nightingale in the Year of Nurses and Midwives in 2020.

She talks about the need for non-Indigenous people to step up on cultural safety, particularly in the wake of the tragic death of Naomi Williams at a NSW hospital in 2016, and also to create culturally safer workplaces for Aboriginal and Torres Strait Islander health professionals.

“We are all culture bearers”

"All people are cultural bearers" #NNF201

University of Southern Queensland academics Adjunct Professor Odette Best and Dr Melissa Carey talk about their research into how well Schools of Nursing and Midwifery are prepared for new requirements for teaching Indigenous health within the curriculum.

You can also watch this interview with Odette Best at the ACN’s 4th History conference, where she talks about the importance of creating a historiography of Aboriginal and Torres Strait Islander nurses, and about the “contradictory (but) interesting” work that Florence Nightingale did around the health and wellbeing of Aboriginal people.

The essential role of nurses in palliative care

Yates, Chair of the ACN’s End of Life Care Policy Chapter, said the White Paper summarised the evidence showing what nursing can contribute to better end of life care, particularly around symptom management, goals of care discussion, co-ordinating care management, and particularly for communities that are typically under-served in palliative care.

She also talked about the implications for nurses with the advent of voluntary assisted dying in Australia – with laws now operating in Victoria and under discussion in Western Australia and Queensland. It’s critical to make sure health professionals are adequately prepared, including for working in a system “that may sometimes challenge their own values”, she said.

“Why do we do things the way we do them?” Challenging health’s carbon footprint

Here the panelists Melinda Goode, Nick Hayward, Catelyn Richards and Luke Yokota talk about their biggest concerns and calls to action for health professionals and the sector.

Working in the Pacific: on the frontline of climate change

Sally Sutherland, a nurse educator, who had just returned from working in the South Pacific, talked about her poster presentation about a mentoring project and observing firsthand the impacts of climate change on health systems and health.

Registered Nurse Luke Yokota launched the Men in Nursing e-book at #NNF2019, his first major initiative after being appointed last year as the inaugural Chair of the ACN Men in Nursing Working Party.

His appointment came after he put a question about the stereotypes ad other barriers faced by men in the profession to Health Minister Greg Hunt at the 2018 National Nursing Forum.

While men make up only just over 10 percent of nursing’s ranks, Yokota says the working party doesn’t have a specific higher target in mind, but wants “to make sure any young man or boy anywhere in the country who wants to pursue nursing can”.

Shifting health from its “horse and buggy” beginnings

Chris O’Donnell, Director of Nursing at Queensland Health and the Queensland chair of the ACN, talks about his journey into nursing via advertising, choosing nursing over medicine, and the importance of having more men in the profession – “the composition of nursing has to reflect the community it serves”.

He also talks about the need for policy, funding and practice to unlock the clinical potential of nurses, allowing them to work to their full scope of practice.

Watch these vox pops with delegates

Learning from history: Marilyn Gendek, chair of the ACN community of interest in history, talks about some of the lessons and highlights from the pre-NNF 4th History Conference,  and gives a wrap of Day 1 keynotes from Luke Yokota (men in nursing), former SA MP and nurse Annabel Digance and nursing academic Associate Professor Georgina Willetts.

Military nursing and Nazi nurses: Commander Wendy Thomas and Captain Amanda Garlick on serving as a nurse in the Australian Defence Force, plus Professor Linda Shields on nurses in Nazi Germany.

As three days of discussions ended, #NNF2019 participants celebrate the power of coming together to showcase leadership, raise barriers to better practice, and efforts to raise the profile and influence of nursing in Australia, and internationally through the Nursing Now campaign.

#NNF2020, to be held as part of the international Year of Nurses and Midwives, will take place from Wednesday 19 – Friday 21 August 2020 in Canberra.