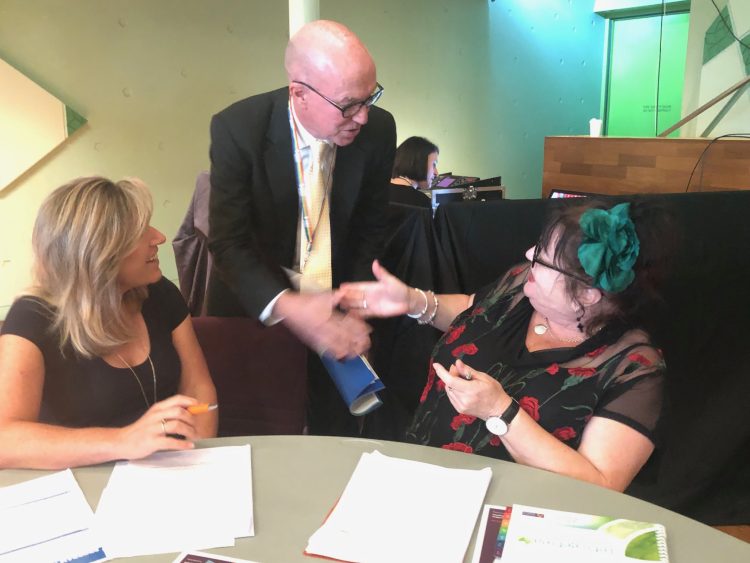 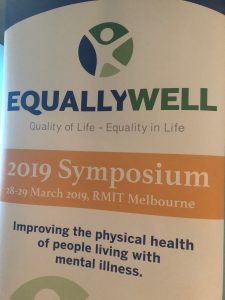 People living with mental illness experience much poorer physical health than others, for a range of reasons including their medications, silos between physical and mental health services, stigma and discrimination, and ‘diagnostic overshadowing’.

Journalist Marie McInerney covered the recent #EquallyWellAust symposium which brought together more than 200 representatives of more than 80 agencies and organisations that have committed to the 2017 Equally Well Consensus Statement.

Watch these interviews discussing solutions and barriers that were highlighted at the two-day event in Melbourne.

“It’s not a knowledge gap, it’s an implementation gap”

Rosenbaum says only about one-third of all Australians are doing enough exercise “and that’s without the additional barriers of living with a mental illness”. The challenge in mental health care is to create “the right culture, services and support”, such as the South East Sydney Local Health District has done to support young people with psychosis.

He said improved physical health of people with mental illness “really is an issue of equality and equity, making sure we meet the needs of people so we can support them to get active,” he told Croakey.

“We know what to do, we know how to do it, we just have to make sure we fund it, and actually do it,” he said.

See this earlier Croakey story about his work with mental health consumers in Australia and refugees in Bangladesh.

A PHN asks: how do we make physical health checks routine in mental health?

In a vox pop interview ahead of the symposium, keynote speaker Libby Dunstan, from the Brisbane North Primary Health Network, and her colleagues Kasey McDonald and Cathy Faulkner, talk about why they were attending the inaugural event and what they hoped to take home from it.

“The tragic headline is that today in Australia in 2019 someone with severe persistent mental illness has a life expectancy 24 years shorter than the rest of the population. That’s just a tragedy by any strength of imagination. What makes it more tragic is these deaths are preventable.”

In this interview, she talks about how traditional siloed approaches to health care and training are barriers to addressing this profound inequity, and how important also to good care is addressing the social determinants of health, including housing, gender equity, community services and urban design.

Aotearoa/New Zealand pioneers Helen Lockett and Caro Swanson talk about the creation of Equally Well, which was founded in New Zealand in 2015, and the gains made and lessons learnt. They include addressing the concerns that people living with mental illness had in its early days that a new focus on their physical health might represent just another layer of scrutiny and stigma.

“We have a lot to learn about equity and experiences, that whenever there is a group that experiences disadvantage or a lack of power, it’s too easy for the system to blame the person rather than to look at the system,” Lockett said.

They also discuss here how they have built a diverse collaboration in New Zealand that is now beginning to produce strategic shifts in health policy and health care, such as having routine screening of people using mental health or addiction services as a priority area in New Zealand’s National Diabetes Strategy.

See also this story on their joint keynote presentation to the symposium.

Equally Well in the UK

In this 6 minute video recorded for the symposium, Andy Bell, Deputy Chief Executive of the Centre for Mental Health in the UK talks about how the Equally Well movement was formally begun in the UK last year, including through contact with Helen Lockett, one of the pioneers of Equally Well in New Zealand (see interview above).

Other major developments were the publication of a report – Improving the physical health of adults with severe mental illness: essential actions – by the Academy of Medical Royal Colleges and the implementation of the Mental Health Five Year Forward View by the NHS in England.

Bell says Equally Well in the UK works on three core principles: 1. That improving physical health for people with mental illness requires collective action,  “it has to be everyone’s business”. 2. That the crucial answers are brought about by shared actions of people with professional expertise and those with expertise from lived experience. 3. That we know what is needed and what works: “All of the solutions, we believe, are being done somewhere by someone” – the aim is to share ideas, insights and understandings to bring about the change.

Maggie Toko, CEO of the Victorian Mental Illness Awareness Council (VMIAC), spoke about the development of Victoria’s Equally Well Framework, which was launched at the symposium and is the first framework of its kind in the state, praising it for the “unprecedented” level of consultation with people using mental health services.

She later talked to Croakey about the physical health priorities for mental health consumers, with over-medication of psychiatric drugs high on the agenda, including lack of consultation about the side effects of medications.

“It’s really hard to concentrate on losing weight when you are taking medications that make you eat…slow down your metabolism and slow you down so you are unable to be motivated to do anything, so all those things have to be taken into consideration.”

What should psychiatrists do to improve physical health?

Dr Kym Jenkins, President of the Royal Australian and New Zealand College of Psychiatrists (RANZCP), spoke to the symposium about what psychiatrists need to be doing to better address the physical health inequity experienced by their patients. She said:

“I think we have a really important role in addressing stigma, monitoring side effects of all medications, not just antipsychotics, advocating and helping patients in lifestyle interventions. We need integration and communication with other health practitioners, I can’t underscore that enough, and we need to advocate for systemic change.”

She talked to Croakey on a number of initiatives by the RANZCP to put physical health on the agenda in training, practice and prescribing, and about her own very personal lesson on ‘diagnostic overshadowing’.

The project arose from growing concern at the significant side effects of antipsychotic medications, notably obesity, diabetes and increased risk of cardiovascular disease.

“We’re treating all these patients for their illnesses by reducing the psychotic symptoms but we’re also killing them slowly through this emergence of these cardiovascular risk factors and diseases,” David told Croakey.

Smoking is a social justice issue

Brophy, who is Professor of Social Work and Social Policy at LaTrobe University in Melbourne and a Principal Research Fellow at Melbourne University, presented at the Equally Well symposium with Mind Australia peer worker and researcher Nadine Cocks on the Quitlink: A Peer supported Smoking Cessation Research Project.

She later told Croakey that smoking should be seen as a social justice issue for marginalised groups, with a range of social and structural factors involved, including stigma and discrimination, and the costs of nicotine replacement therapy.

In this interview at the close of the event, social policy researcher Dave Peters, a keynote speaker, consumer representative and co-chair of the Equally Well Implementation Committee, wraps up #EquallyWellAust and the ongoing challenge for the 80-plus organisations and agencies that have signed up to the Equally Well Consensus Statement.

“Everyone is really enthusiastic about the need for change but actually making it happen in a deliverable timeframe is the next challenge,” he told Croakey.

He talked about the importance of bringing together people from across sectors, specialties and experiences of mental illness to discuss the issue, of the need to seriously address the impact of mental health medication and treatment on physical health, and of feeling “invigorated” about the possibility of better physical health outcomes for people living with mental illness.

This is the final article in our #EquallyWellAust series.

All our interviews from the symposium have been compiled into one playlist. Some were broadcast live on Periscope via Twitter, others were pre-recorded and later uploaded to CroakeyTV on YouTube. As at April 23, they had been viewed a total of 1,511 times across Periscope and YouTube.

Croakey’s live Periscope streaming of key sessions of the symposium had 1,196 viewers.

Symplur analytics for the period of Croakey’s coverage show there were 288 participants on Twitter using the hashtag, sending 2,475 tweets, and creating more than 14.59 million Twitter impressions. Read the Twitter transcript.