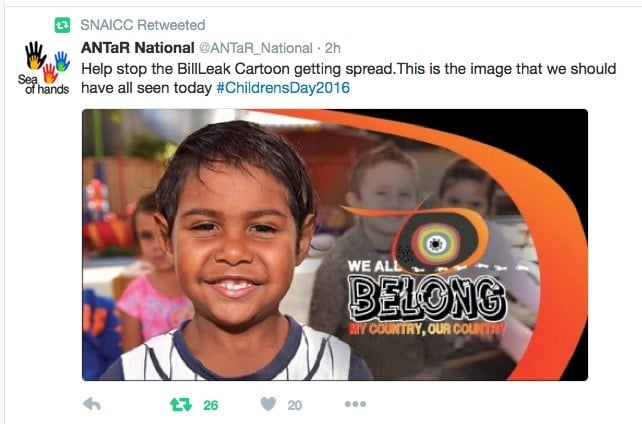 “We are better than this”: Indigenous organisations and leaders respond to racist cartoon

(This post was updated on 9 August to include a VACCHO statement).

Indigenous and non-Indigenous leaders today reacted angrily to a cartoon by Bill Leask depicting Indigenous Australians and published in the Australian.

The cartoon was criticised for being racist, derogatory and particularly insensitive given that it is National Aboriginal and Torres Strait Islander Children’s Day.

VACCHO is outraged by racism being perpetuated by The Australian newspaper

Ms Louise Lyons, Acting CEO of the Victorian Aborignal Community Controlled Health Organisation (VACCHO) has written to the Editor in Chief, Paul Whittaker to convey our utmost despair that the Nations own newspaper, The Australian, could make such an uninformed editorial decision that saw the publication of the Bill Leak’s blatantly racist cartoon on 4 August 2016.

On National Aboriginal and Torres Strait Islander Children’s Day, The Australian should be taking the opportunity to celebrate the strength and culture our communities and families have in raising Aboriginal children.

Educating the public on the crucial impact that community, culture and family play in the life of every Aboriginal and Torres Strait Islander child is a shared national vision to close the gap.

Instead, our national newspaper has made a deliberate decision to publish an outdated, overtly racist cartoon that plays to the majority uninformed public, further inciting stereotypical misconceptions of Aboriginal culture and parenting practices.

Racial discrimination is well documented as a contributing factor to poor health outcomes for Aboriginal and Torres Strait Islander Australians. Racial stigmatisation of Aboriginal parents will not reduce the over-representation of Aboriginal children in the youth justice or child protection system but further disadvantage the most vulnerable in our community.

A political cartoonist’s primary role is to push boundaries and provoke discussion but not in a manner that is prejudice and unlawfully aggravates racial hatred.

It is well documented that members of communities targeted by racism can feel anxious, unwelcome and less confident to participate in public life and debate.  “I am surprised that an Editor of our national newspaper, has twisted the words of a respected Aboriginal academic to justify the publication of Leak’s cartoon as pursuing a national debate,” said Ms Lyons.

VACCHO has offered Bill Leak and colleagues the opportunity to participate in VACCHO’s Cultural Safety Training, as education always triumphs over ignorance. VACCHO also urged the Editor in Chief to apologise to their readers and our Aboriginal community.

It is important to stamp out racism, and VACCHO would like to remind the wider population that racism must not be tolerated and must be reported.

If you experience or witness racism, report it to reportracism.com.au or antihate.vic.gov.au.

The National Congress of Australia’s First Peoples expressed their dismay at yet another example of the prejudicial attitude of many Australians.

“Bill Leak’s cartoon that was published in today’s copy of The Australian is yet another symptom of the endemic racism that exists within Australia. The very fact that those involved did not see this as racist has come as little surprise and proves yet again that the ‘BIG R’ is alive and well.

The cartoon suggests that Aboriginal men, in particular, are alcoholics and that they are irresponsible parents and community members.

The Australian and Mr Leak obviously did not think or consider the social impacts that the cartoon may have. At a time where race relations in this country are tenuous it is of grave concern that the Fourth Estate perpetuates racism. Mr Leak should take a long hard look at himself.

The fact that our political masters have allowed this level of institutional racism to fester and become acceptable is an indictment on the politicians of this nation.”

In response to the cartoon, CEO of Reconciliation Australia, Justin Mohamed, said:

“The appalling cartoon we have seen from Mr. Leak today speaks to the racism, discrimination and denial of history that still mars the nation, and the relationship between First Australians and non-Indigenous Australians.

“A cartoon of this nature is unacceptable in today’s Australia, but it is particularly disappointing to see it on National Aboriginal and Torres Strait Islander Children’s Day. Children’s Day is a time to share pride in our nation’s Aboriginal and Torres Strait Islander children, and support these children and their families to stand tall and strong.

“We call on all Australians to show zero tolerance towards the disgraceful denial of history, deep-rooted racism and thoughtless acceptance of hurtful stereotypes on display from Mr. Leak today. As a nation, we are better than this.” 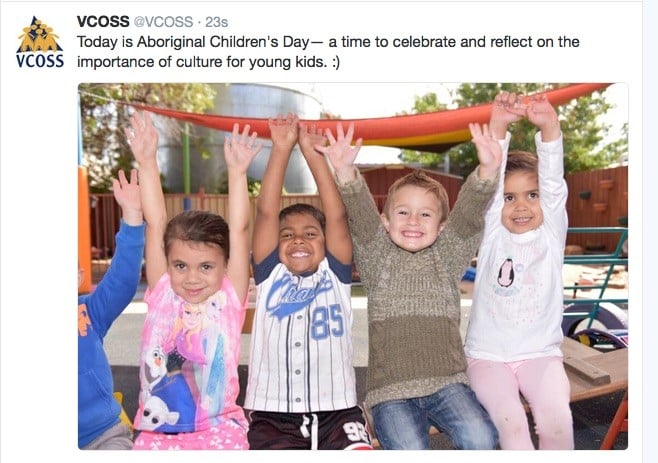 SNAICC, a national peak body for Aboriginal and Torres Strait Islander families and children released a statement saying that “the cartoon published today in The Australian, one of this country’s largest newspapers, was disgusting, disrespectful, and hurtful.

Those involved in publishing such a clearly racist cartoon should be ashamed and should issue a public apology to all Australians. Responsibility, professionalism and duty of care have all been abandoned in this unforgivable act.

All SNAICC members are unified in their call condemning this racism, made all the more disgraceful by its publication on Aboriginal and Torres Strait Islander Children’s Day – Australia’s largest day to celebrate our kids and families.

SNAICC intends to lodge complaint with the Australian Press Council on this matter, in line with actions from several other leading organisations.”

The NSW Aboriginal Land Council (NSWALC) also announced that it will lodge a complaint to the Australian Press Council urging action against a racist cartoon in today’s edition of The Australian.

“Sadly, racism and discrimination is a fact of life for Aboriginal people who have lived on and cared for this country for more than 60,000 years.

“The hurt and humiliation that victims of racism experience is real and has a terrible toll on the health and well-being of Aboriginal people.

“The Land Rights network in New South Wales works hard to ensure Aboriginal people are proud of their identity and culture.

“Bill Leak’s cartoon is ugly, insulting and it is embarrassing for Australia’s national newspaper to publish it.

“It is time the decision-makers at The Australian accept personal responsibility for the hurt they have caused Aboriginal people today.”

Minister for Aboriginal Affairs, Nigel Scullion, said he was appalled by the racist cartoon.

Minister Scullion said the publication of Bill Leak’s cartoon today was particularly tasteless, given it was National Aboriginal and Torres Strait Islander Children’s Day, a day to celebrate and show our support for Indigenous children throughout Australia.

“Although Australian cartoonists have a rich tradition of irreverent satire, there is absolutely no place for depicting racist stereotypes,” Minister Scullion said.

“I am heartened that various voices from across the political and social spectrum have come out and strongly condemned the cartoon.

“I would urge the Australian to be more aware of the impact cartoons like the one published today can have on Indigenous communities.

“Mr Leak may also wish to reflect on BeyondBlue’s campaign, No one should be made to feel crap just for being who they are, that is highlighting the impact of various forms of racism on the mental health of our First Australians.”

PrevPreviousMinor parties and Independents in the Senate: a guide
NextMake #MyCensus count for public healthNext