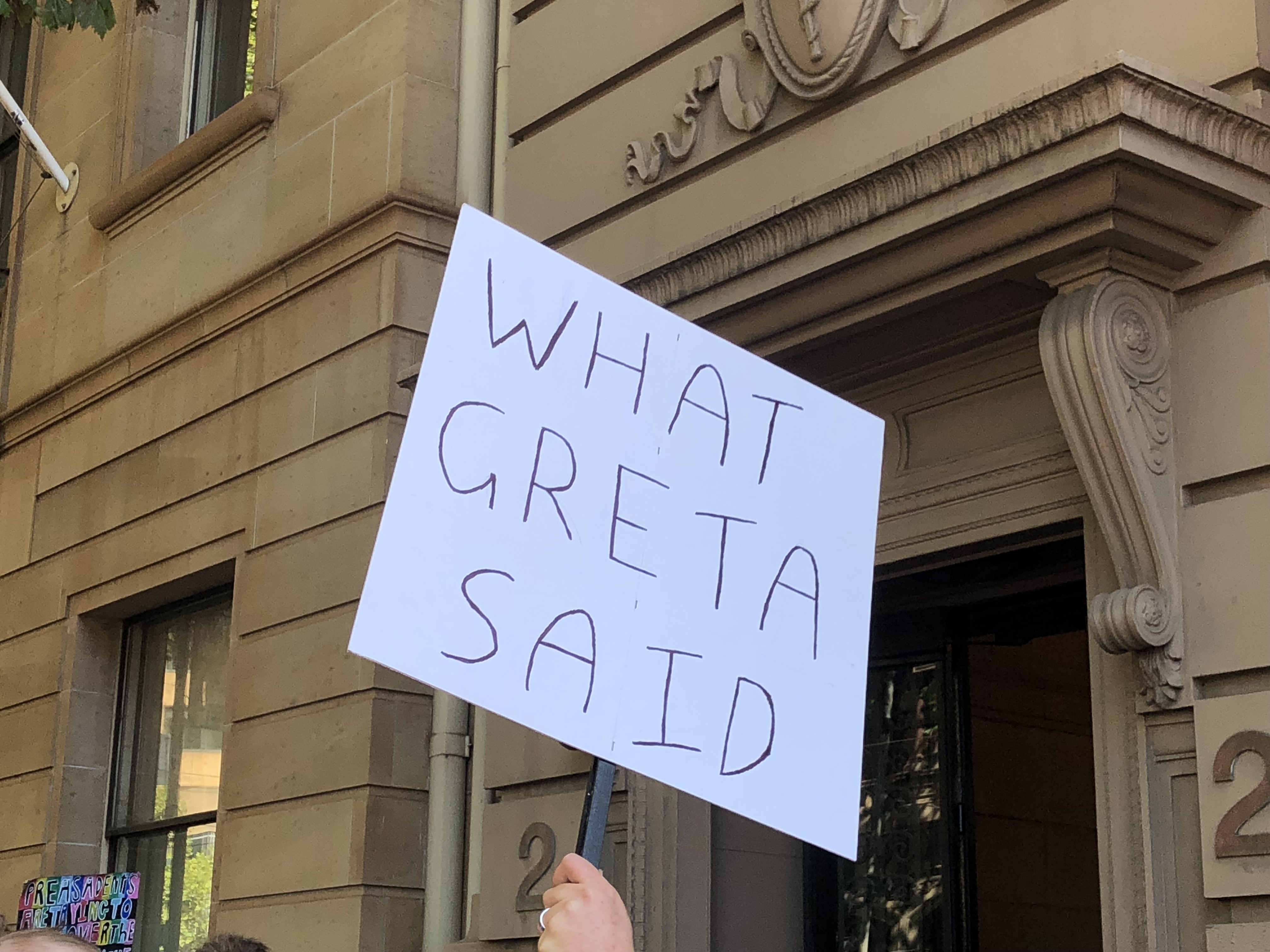 Sign from the school strike in Melbourne in March. Photograph by Melissa Sweet

Introduction by Croakey: After the global school climate strike in March, the BMJ published an article by editor in chief Dr Fiona Godlee and others urging health professionals to support the activism of schoolchildren and groups such as Extinction Rebellion.

Greta Thunberg (who has just been described by former United States President Barack Obama as “one of our planet’s greatest advocates”) and other schoolchildren around the world had shown a commitment that others, including health professionals, had not managed, the authors said in the article, titled Schoolchildren’s activism is a lesson for health professionals.

Despite the efforts of groups like the Global Climate and Health Alliance and the Lancet Countdown on Health and Climate Change, the commitment of health professionals to this issue had been “patchy, intermittent, and sotto voce”, they said.

Ahead of this Friday’s strike (see details of Australian events here), the Public Health Association has issued a statement of support, and many others in the health sector are planning to attend and support the strikes. According to the organisers, more than 1,600 Australian businesses are supporting staff to attend, more than 30 trade unions have endorsed the strike, and the Victorian Government has also shown support.

If you can’t get away from work, here are some suggestions for how to support the action from workplaces. For example, more than 600 doctors in North America have put their names to this letter urging teachers to allow students to attend strike.

The BMJ article says health professionals and their organisations must support and learn from the schoolchildren’s action, finding more effective ways to help people and politicians understand that climate change is by far the biggest threat human health has ever faced.

The authors say climate breakdown is an immediate health threat, not a distant environmental inconvenience:

Now is the time for health professionals to share the demands of schoolchildren and Extinction Rebellion activists, to insist that all governments tell the truth about climate change, declare an ecological and climate change emergency, and act urgently to halt biodiversity loss and to reduce greenhouse gasses to carbon net zero by or before 2030.

To facilitate this, we call on governments to create and be led by citizens assemblies on climate change and ecological justice, and on health professionals to vote only for representatives who prioritise climate change.”

Meanwhile, a Year 12 student who is one of the Melbourne strike organisers, Maiysha Moin, urges Croakey readers and the wider health sector to join with her and her colleagues in their fight for a safe future.

We’re in the thick of a climate crisis. It’s outstanding incomprehensible that walking on the streets, there aren’t lights flashing and horns blaring that we’re in a code red situation: our planet is on fire.

With worsening extreme weather systems, from inundating floods to ravaging bushfires, the prediction of our atmosphere heating up 4℃ above pre-industrial levels by the end of the century is possible.

These numbers and the sizzle of the summer to come have set a fear within the bones of young people.

On September 20th, we’re going on strike. Putting our education and voices to the test. We young people have three key demands:

I want to give you an insight into how climate change affects several dimensions of who I am. From my identity as a young Australian to my Bangladeshi heritage and to my visceral concern for public health.

My identity as a young Australian is paramount to my involvement with School Strike for Climate. I, an Australian citizen, am the embodiment of privilege: attending a well-resourced school, armed with the right to vote and free to raise my voice to the stars.

We, young people, have just eleven years to undo the mistakes of the generations before ours. Our voices are most powerful because we are the ones who will be living the future. The world will only change if the young give a damn.

And we do. That’s why we strike. It is not only our Australian privilege that empowers us to stand up in the face of the fossil fuel lobby, who are adamant to destroy our futures, but also Australia’s unique opportunity to become a world leader in renewables and clean energy.

We are home to the sunniest land on earth and our coast offers the natural resources of wind and ocean currents. Young people are seeking solutions to the greatest threat to humanity, and if Australia has some of the best wind and solar resources in the world, then why don’t we harness that to become a leader of change? 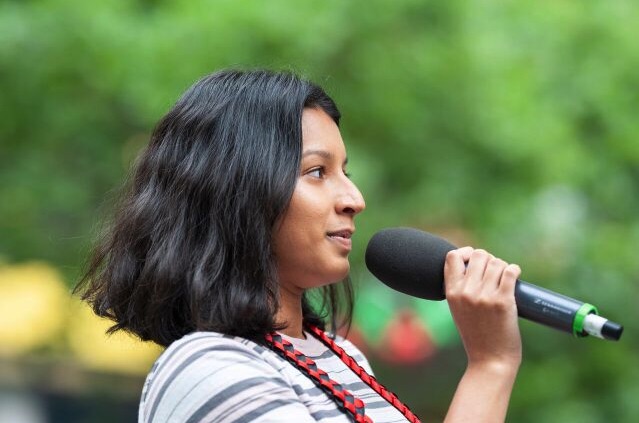 Fighting for my heritage

We don’t need to be part of the problem, we can be the solution. This is what we fight for. We fight for a safe future. We fight to become champions of climate action.

As the eldest Australian-born child to Bangladeshi immigrants, I have grown up deeply connected with and immensely proud of my heritage. To this day, I feast on the wonderful tales about the fertile lands of the tropical Bangladesh, the unconditional affection for family, the lively weddings and birthdays – a myriad of wonderful stories that have weaved a wholesome image of my parents’ motherland.

But all that could be washed away before I reach my 50th birthday. It is the amalgamation of Bangladesh’s flat topography, dense population and weak infrastructure that positions it to lay vulnerable to the unpredictable forces of climate change.

Bangladesh is no stranger to the volatile and dangerous concoction of floods, tropical storms and other natural disasters; however, climate change will exacerbate these ancient forms of destruction, this time sweeping away more human life, animal stock and vital infrastructure than necessary.

Rising sea levels pose the risk of pushing the nation underwater, and erasing with it a hub bubbling with food, celebration and culture. With Bangladesh producing only 0.4 percent of total world emissions, it is suffering the brunt of the consequences of climate change.

This is what I fight for. I fight to protect one of the most vulnerable countries. I fight to save my heritage from being washed out by the actions of those profiting from climate inaction.

Most importantly, as a Year 12 student contemplating a career in health sciences, public health is at the forefront of my mind when considering the impacts of climate change.

The Australian Medical Association recently joined ranks with the American Medical Association, the British Medical Association and the World Health Organization in declaring a climate emergency and acknowledging climate change as one of the greatest threats to public and global health in the 21st century. Infectious diseases are expected to increase, along with morbidity from heat stress and incidences of mental ill-health.

One of the major issues facing my generation is mental health. Already as a student and part of School Strike 4 Climate, I have seen a number of young people’s mental health deteriorating with stress, anxiety and depression pertaining to climate inaction.

Nothing dislodges your heart more than watching a friend drown in the helplessness of failing climate policy and the lack of national action. Like healthcare, we need to address the root of the issue: stop greenhouse gas emissions.

While the future does seem bleak and desolate, we have a narrow time frame to enact change to preserve human civilisation as we know it.

Join us on September 20th, three days out from the Emergency Climate Summit in New York, to urge world leaders to step up into the roles which they have been elected. Come and stand shoulder to shoulder with First Nations people, young people, workers and those affected by climate disasters.

For many it can be a challenge to strike from work, especially if you’re working in the healthcare sector, we acknowledge that.

School Strike 4 Climate encourages workers who are restricted from attending the strikes, to wear a SS4C sticker or badge to work. Or even wear some funky socks or deck out in green to start conversation around climate action and to stand in solidarity with the movement. We also encourage all workplaces, in support of climate action, to publish a statement of solidarity with the strikers.

Let’s show the world what people power looks like and tell our leaders to do what is right, not just what is easy.

• Maiysha Moin is a Year 12 student based in Melbourne. Her environmental activism journey came into public focus with her interview on the Today Show and various media outlets in promotion of the School Strikes across Australia in November 2018. Since then, her passion for climate change and sustainability has manifested in the new initiative, Climate Leaders, and her tenure as Environment Captain at her school. She continues her advocacy with School Strike 4 Climate as a Melbourne strike organiser and spokesperson. Maiysha’s interests also extend to women’s rights and social equality. 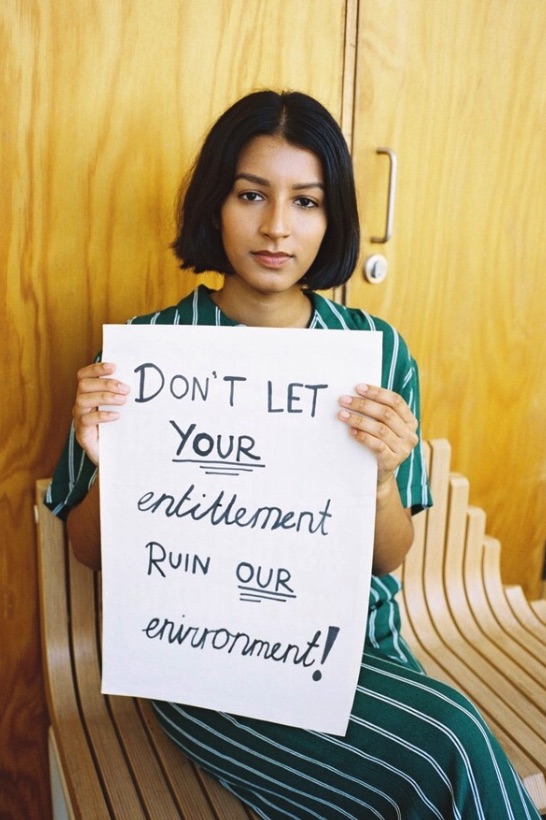 • This article is published as part of the Covering Climate Now initiative, an unprecedented collaboration involving more than 300 media outlets around the world that is putting the spotlight on the climate crisis in the leadup to a Climate Action Summit at the United Nations General Assembly in New York on 23 September. It is co-founded by The Nation and the Columbia Journalism Review (CJR), in partnership with The Guardian. Croakey invites our readers, contributors and social media followers to engage with these critical discussions, using the hashtag #CoveringClimateNow. See Croakey’s archive of climate and health coverage.