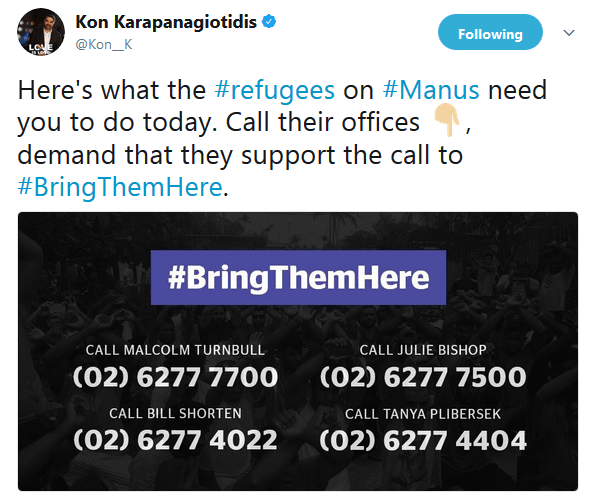 “We have become refugees for a second time in this hellhole”: fears for health, wellbeing at Manus

Australians who are outraged and distressed at the treatment of asylum seekers at the Manus detention centre are being urged to keep up calls to Prime Minister Malcolm Turnbull’s office, demanding the men be brought to Australia or elsewhere to safety.

The calls come amid growing fears of a “potential crisis of health and mental health” among the 600 refugees and asylum seekers who are barricaded inside the closed detention centre on Manus island, with essential services like food, water and electricity and access to their medications cut off. There are reports they are collecting rainwater to drink in wheelie bins.

Two of the men sent desperate messages to the #BringThemHere rally in Melbourne on Saturday, pleading for help and safe sanctuary in “a free, democratic, secular society that welcomes refugees”.

Iranian refugee Behrouz Boochani, who has written powerfully for years about the injustice of Manus and last week won Amnesty International Australia’s print and online media award for his ongoing reporting from the centre, said it is “like a war zone”. He said:

“We have become refugees for a second time in this hellhole, abandoned and left to fend for ourselves as best we can.”

Click on the link below to hear his brief message:

“Most of us have never known safety in our lives.  The situation in Manus is getting worse and we need your help.”

The rally heard a furious speech from Greens MP Adam Bandt, accusing the Federal Government, backed by the Labor Opposition, of ceasing to act as a government and instead unleashing terror. He said:

You can watch his speech here below.

Thanks to the Refugee Action Coalition for providing Croakey with the audio clips from Manus.

On Friday Professor Louise Newman, Director of the Centre for Women’s Mental Health at the Royal Women’s Hospital and Professor of Psychiatry at the University of Melbourne, warned of a potential crisis in health and mental health among these detainees.

“Some of these people are treated with medication, usually antidepressants, and some feel that this provides them with some symptomatic relief. Detainees I’ve spoken with have informed me that medications will no longer be supplied,” she wrote at The Conversation.

“There are significant risks associated with sudden withdrawal of medication particularly when facing increased anxiety and stress. In the case of detainees, these withdrawal symptoms could include agitation, depression and a greater risk of suicide or self-harm.”

“Governments need to seriously consider that the consequences of failure to provide treatment to people under their care are significant and can be seen as gross negligence and human rights abuse,” she said.

She also warned about the serious questions that both Manus and the Nauru offshore processing centre raised about the possibility of providing much-needed care in such environments and the way doctors’ ethics and practice are compromised.

Her warning followed an investigation by Buzzfeed and the ABC into life-threatening medical delays at Manus and Nauru.

“In my view, the current situation on Manus is one of the most extreme forms of medical neglect ever countenanced by the Australian government and one where the consequences will have reverberations throughout broad health professions.”

“We have serious concerns about the welfare, safety and well-being of the roughly 600 men who remain in the accommodation compound, who are too frightened to leave.

We call on the Australian Government, as the Party who interned the men in the first place, to immediately provide protection, food, water and other basic services which have been cut off since authorities shuttered the facility on 31 October. Australian contractors/service providers have now left the island.

The High Commission reminded the Australian and Papua New Guinean governments of their responsibilities under international human rights law and the 1951 Refugee Convention:

“to protect the men from harm; to ensure their right to seek and enjoy asylum; to guarantee access to fundamental economic, social and cultural rights, including adequate housing, water, food, sanitation, and health care; as well as to fulfil other humanitarian obligations.”

“Moreover, the men have said they fear they will be subjected to violence at the hands of locals if they leave the compound – and, given there have been violent incidents in the past, we believe these fears should be respected and satisfactorily addressed,” it said, urging the Australian Government to transfer the men to mainland Australia.

But it seems we still won’t even let a small number of them go to New Zealand, at least until the US has confirmed how many people it will take under its deal with Australia, despite new Labour Prime Minister Jacinda Ardern again offering to take 150 refugees who have been subject to the offshore processing legislation, ahead of her weekend visit to Australia.

Last week the Australian Medical Association issued a strong statement in response to “disturbing reports that were emerging from Manus about lack of access to food, water, and medications, and unsanitary conditions such as blocked toilets and unsuitable accommodation.”

AMA President Dr Michael Gannon said that putting the asylum seekers into a dangerous and unhealthy situation was totally unacceptable.

“The Government has a responsibility to ensure the safety, health, and wellbeing of all the detainees on Manus, and we will be seeking assurances to that effect,” Gannon said, adding that many asylum seekers have complex mental and physical health needs.

“It is unacceptable that access to electricity and water has been cut off, as reported.

“It is even more unacceptable that medical care and medications may have been used as an inducement to move people to another location.

In the meantime, there are growing reports of ill-health being experienced by the Manus detainees, with the Asylum Seekers Resource Centre appealing to health professional for help with putting together a “medical team” able to provide help over the telephone (see tweets).

ASRC CEO Kon Karapanagiotidis has been tweeting details of the medication that many of the men were on, and can no longer access, asking medical professionals to advise what risks they now face.

PrevPreviousHow the tobacco industry is infiltrating policy processes and harming the environment
NextMental health services are causing trauma, rather than healingNext