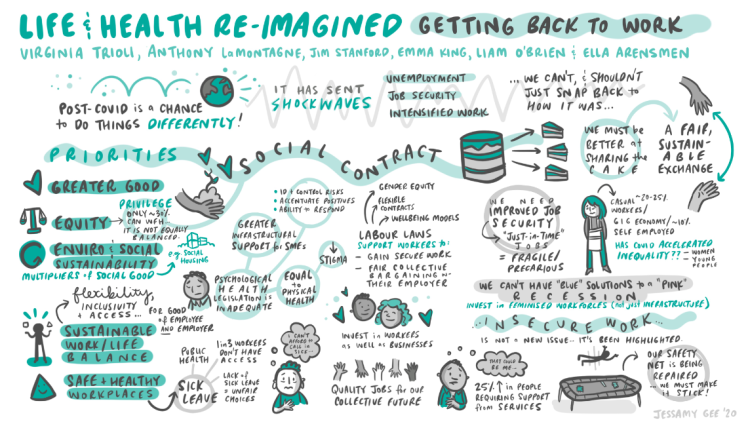 We must not “snap back” to unhealthy workplaces and practices

The Croakey Conference News Service is covering the VicHealth Life and Health Re-imagined series over five weeks. Below is a wrap of the discussions at the first event on the role of work as a determinant of health, which we previewed here.

Next week we will cover the session on: Good food for all, how do we get there? Our preview and VicHealth’s paper for the discussion will be published on Monday, with the event broadcast for free on Thursday 25 June at 2pm AEST. Please join in or follow via Twitter at #HealthReImagined.

An expert panel on healthy jobs and workplaces has warned that Australia should not “snap back” to high levels of insecure work and inequity in the workforce that have created “huge vulnerability” for the country in the coronavirus pandemic.

The panel discussion, convened by VicHealth to look at the future of work as the Australian economy reopens, heard calls for Australia to halt the march of the gig economy and other globally high levels of job insecurity, to maintain new levels of welfare support, and provide “precarious workers” with stronger bargaining power.

It also raised the need to strengthen mental health and labour rights supports particularly in small and medium firms, and direct stimulus funding to child care and affordable and social housing.

“We’re very worried that this pandemic has accelerated inequality…[and] about what a second wave would be like in this country, with one in three workers without sick leave,” said panelist Liam O’Brien, Assistant Secretary of the Australian Council of Trade Unions (ACTU).

How can we reshape work to benefit everyone?

That was the question put to the panel by VicHealth in the first of five weekly “life and health re-imagined” discussions it is hosting on lessons from the pandemic for addressing critical determinants of health.

You can watch a full recording of the one-hour discussion, moderated by ABC Radio host Virginia Trioli, and read the paper co-authored for the discussion by Professor Tony LaMontagne, from the Institute for Health Transformation at Deakin University and Professor Maureen Dollard from the Centre for Workplace Excellence at the University of South Australia (which LaMongagne summarises in the recording). 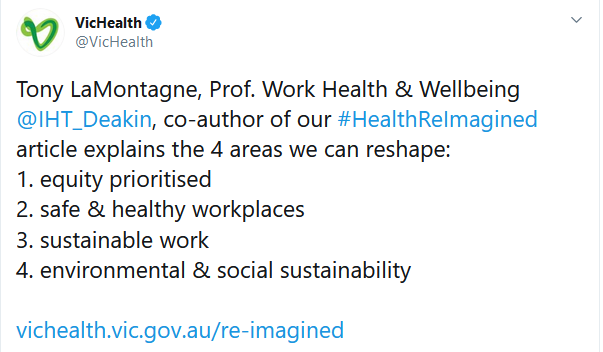 See below more from the discussions via participants on Twitter (using the series hashtag #HealthReImagined), including about structural weaknesses in Australia’s labour market and the benefits and risks of working from home (and the “double injustice” around who is most likely to be able to do this). Speakers also talked about “pink versus blue” stimulus funding, and how we should follow the lead of New Zealand, Canada and Scotland in measuring wellbeing alongside traditional targets like GDP growth.

Here’s our preview article too which focuses on the risks of precarious work, and options like a four-day week. The Per Capita thinktank is also warning on the individual and aggregate level risks of Australia’s worryingly high rate of underemployment – at around 12 percent it is double the rate of other OECD nations.

The cost to individuals both now and in the future “limits their capacity to progress their careers, affects their mental health, and is likely to make them more risk-averse, which limits job switching and pay bargaining”, warns Matthew Lloyd-Cape in a paper titled Slack in the System, echoing many of the issues raised during the VicHealth webinar.

Surgeon Dr Neela Janakiramanan raised criticisms on Twitter about the panel’s lack of diversity, saying the announced panels for the first two of the five sessions in the series did not “reflect the community nor the make up of academia”. In response, VicHealth said it was “working to include a range of diverse voices, backgrounds and experiences in our coming panels”. 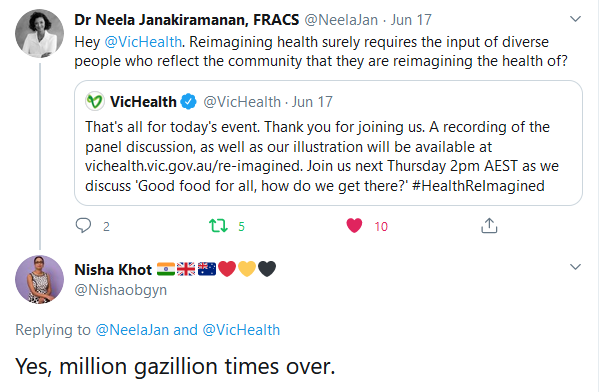 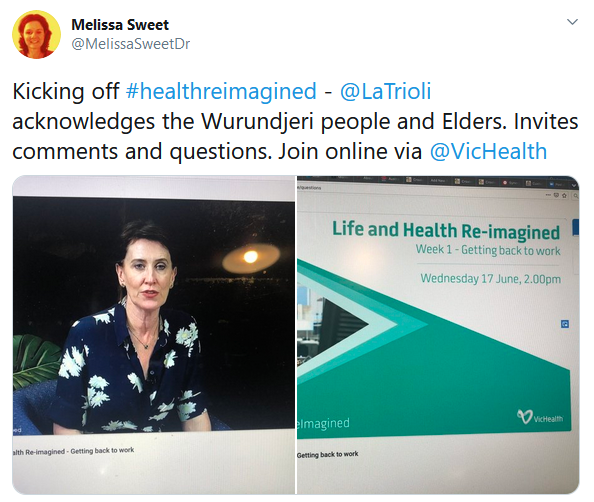 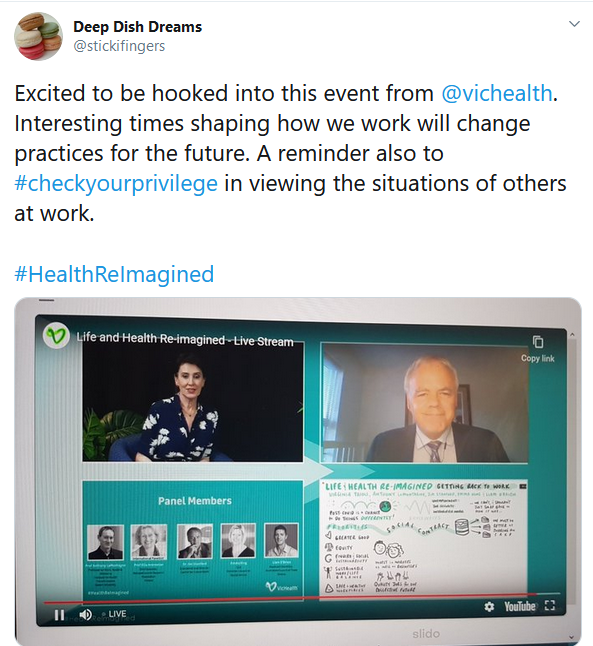 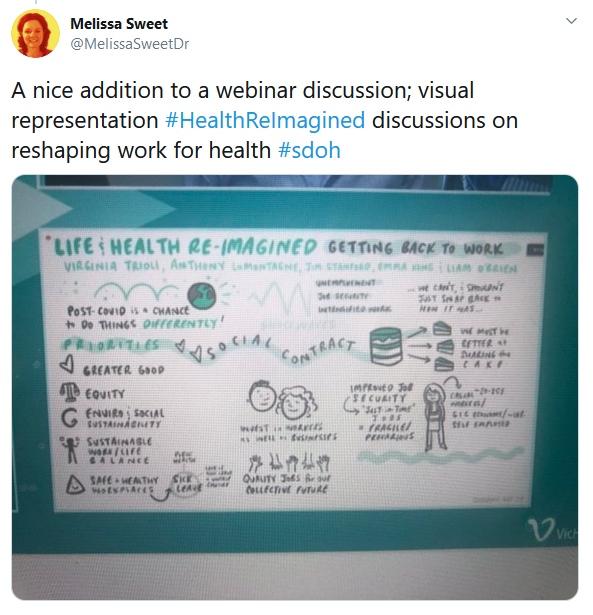 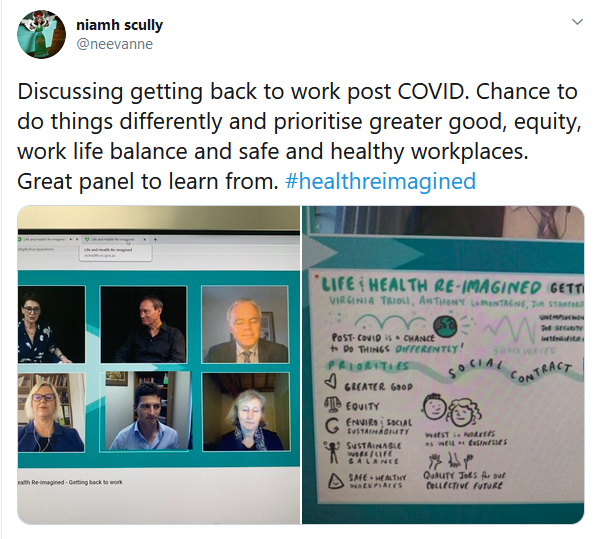 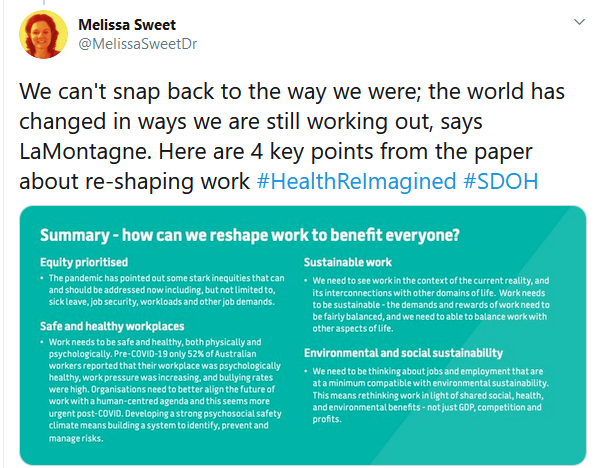 The panel heard a number of calls for small and medium enterprises (SMEs) in particular to “lift their game” on workplace wellbeing.

A 2019 ACTU report, Work Shouldn’t Hurt, found that three in five working people had experienced mental illnesses or injuries like stress, depression, or anxiety at work as a result of their employer or workplace failing to manage poor working conditions. These are higher levels of mental health injury in workplaces than physical injury but don’t appear at those rate in worker compensation cases, according to Liam O’Brien, who said mental health is a “glaring omission” in work health and safety laws.

International guest, Professor Ella Arensman, Chief Scientist of Ireland’s National Suicide Research Foundation, had particular concerns about SMEs (enterprises with up to 250 employees), which she said had recorded significantly increased levels of distress, depression and anxiety, even before the pandemic, versus larger firms which could apply more focus and resources.

Jim Stanford attributed part of that weakness in SMEs to the “huge gap between the rhetoric of being your own boss” and the reality of small business whereby fewer than half of the 350,000 SMEs set up each year in Australia survive beyond the first five years.

Many of those exist in a “hypercompetitive environment”, where they don’t or can’t access the sorts of supports they need, including management training, access to capital and around labour standards, “so wages and entitlements tend to be poorer, probably one of the reasons why mental health stresses are more severe there,” he said.

“We have to help SMEs lift their game, so they can become fully fledged participants and contribute to the quality of life of their employees as well as their customers.”

Working from home: handy but “a double injustice”

Working from home has been an “important cushion” in the pandemic, Stanford said, allowing those who could to keep working and earning and for the economy to keep going “at least at partial speed”.

He expected about 30 percent of workers to keep doing that and said employers should ensure it is done properly, including addressing issues like safety, fair compensation for costs incurred, and how to draw the line around home and work to make sure people “are not on call every evening and weekend”.

But Stanford said the capacity to work from home was not evenly distributed across the labour market, being concentrated among managers and professionals who in any case earn above average incomes.

“In some ways, it was a double injustice, the people able to keep working are the people with more resources to fall back on if they didn’t work,” he said. 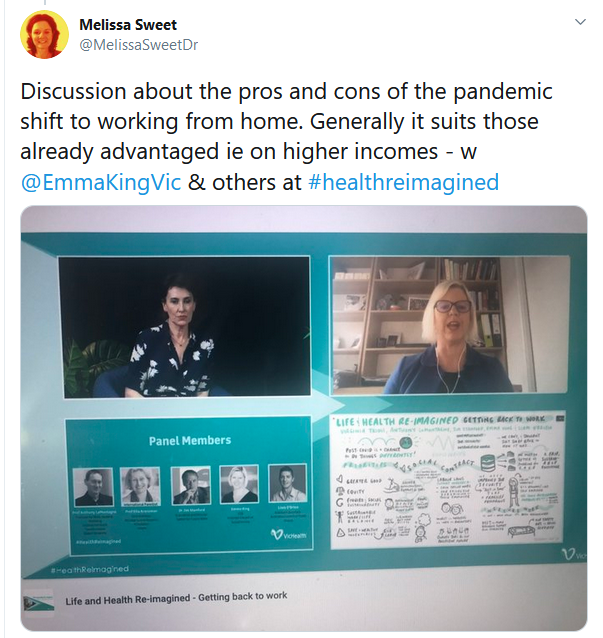 Not pink batts but “pink stimulus”

Rather than invest in high end renovations to jump start the economy, LaMontagne’s paper welcomes the joining of traditional “enemies”, the Master Builders’ Association and Construction, Forestry, Mining & Energy Union (CFMEU), coming together to propose a government financed social housing initiative, saying stimulus funding should look for “the multipliers of social good in government investment versus high end renovations.

But Liam O’Brien said the stimulus focus needed to be on women and work disproportionately done by women, who have been most affected by the pandemic.

“Whenever we think of stimulus, we tend to think of infrastructure: bricks and mortar,” he said.

He said it was counterintuitive at a time of massive unemployment that has disproportionately affected women that the government would “pull out the rug” from child care support. “This has been a pink recession, but we keep coming up with blue solutions”. 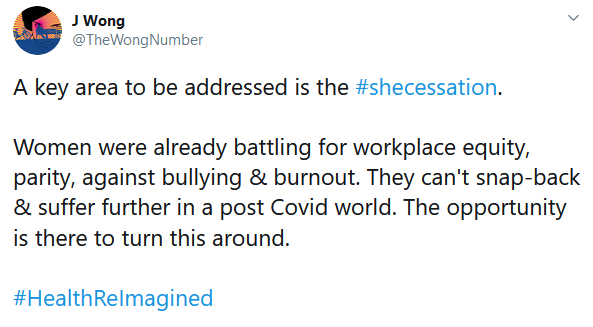 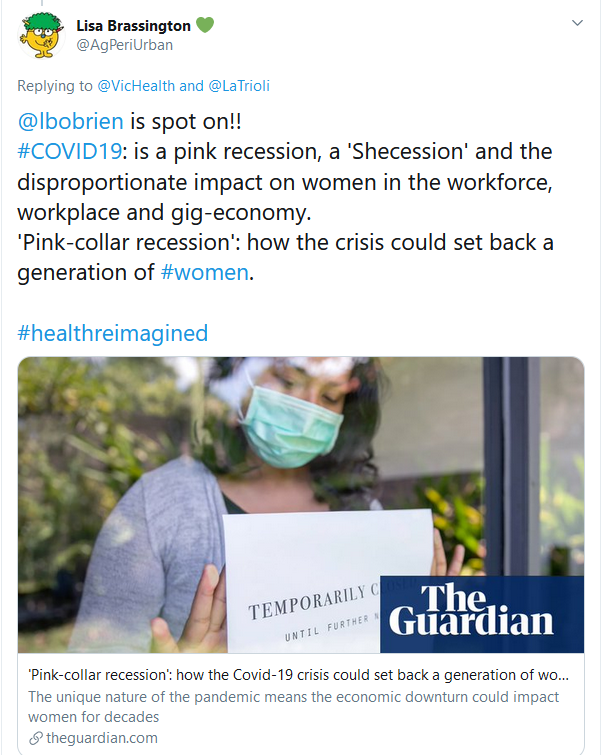 Protecting at risk workers and workplaces

The panel found a silver lining from the pandemic in increased payments under Job Seeker and Job Keeper, as well as the hope that governments and others may stop ‘vilifying’ people on benefits, now that we have a massive number of people relying on government support.

VCOSS CEO Emma King urged the maintenance of the higher Job Seeker payment, saying Australia’s pre-pandemic safety net was like an ageing trampoline, becoming worn and full of holes. It still has gaps, with people on temporary protection visas still falling through, but is far better now than before, she said.

Jim Stanford agreed, saying the high numbers of those relying on government support may now “change the political calculation” and open up the opportunities to make the improvements in social supports “permanent, and in fact make them even stronger”.

His Centre for Future Work is calling for a Marshall Plan style response to the pandemic, with a revitalised workplace health and safety regime that can protect at risk workplaces like meat processing plants and aged care, and that delivers permanent paid pandemic leave across the workforce. 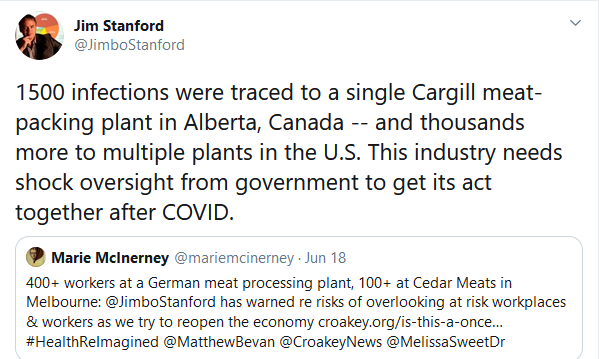 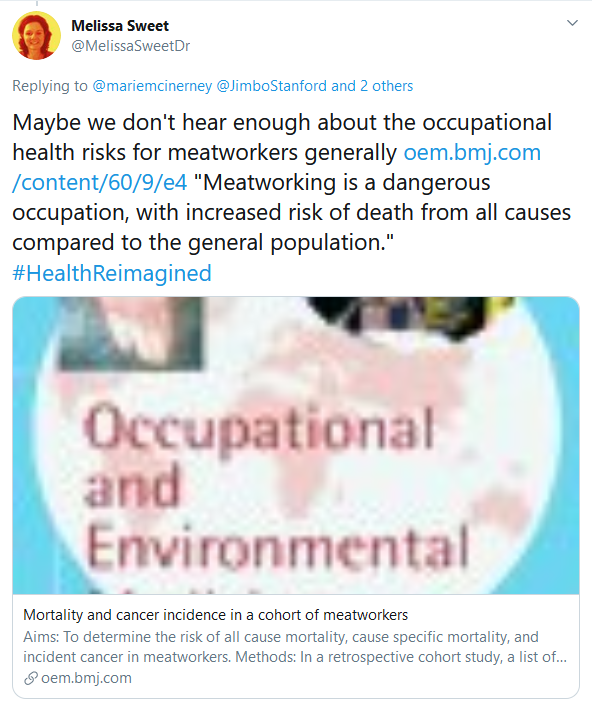 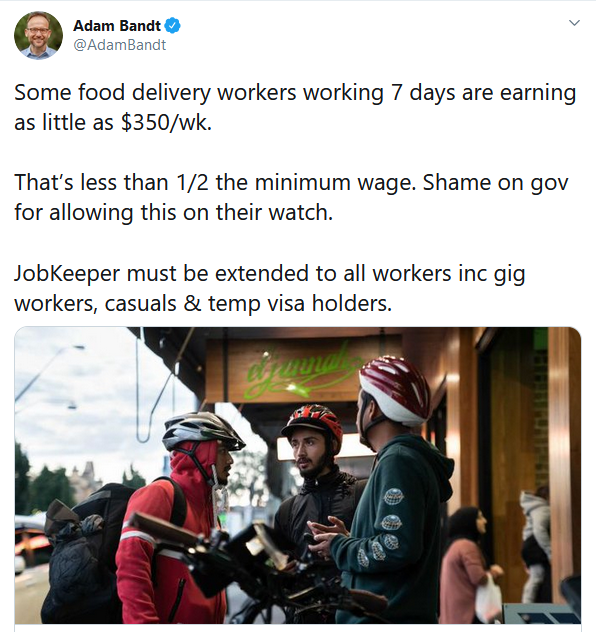 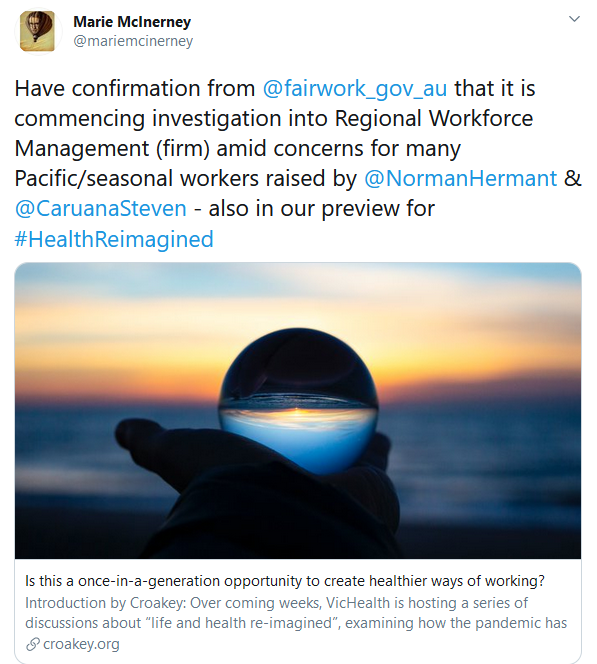 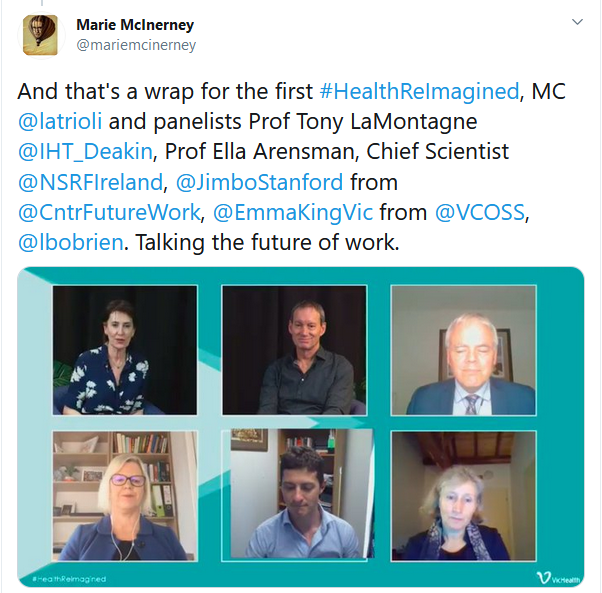