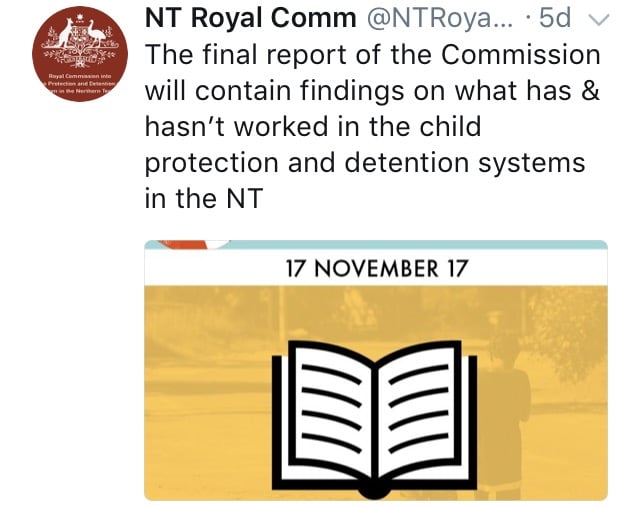 “We will be vigilant, we will be monitoring” – state and federal governments must act on NT Royal Commission findings

There’s one more important event you shouldn’t miss this week. Today (November 17), the Royal Commission into the Protection and Detention of Children in the Northern Territory will release its findings and recommendations.

Commissioners Margaret White AO and Mick Gooda, will mark the end of the process with a community event in the NT Legislative assembly at 11am today.

In an Editorial published in The Australian this morning, the Commissioners wrote that their findings were disturbing on many levels, “not least of course because it has occurred on our watch and in our country.’

In the process of the inquiry the Commissioners said they visited many communities throughout the Territory:

We listened to men and women speak of their love for their children, their deep sadness when they were removed or detained, their recognition that many parents need a lot of support to be good parents and their strong belief that they, themselves, must be partners in improving their children’s health and welfare and creating conditions where they can flourish.”

Children’s voices are at the centre of this inquiry.”

The Commissioners said the human costs of the current system were dire, with many children “crossing over” from the child protection to the justice system,

The Commissioners also obtained a cost benefit analysis from Deloitte, which found that, if their recommendations for changes to to youth justice and detention are adopted, it will deliver savings of $335.5 million by 2027. They wrote:

Ahead of the report’s release, Aboriginal Peak Organisations Northern Territory (APO NT)* held a media briefing earlier this week, to provide some background on youth detention, and flag some of APO NT’s priorities.

John Paterson (CEO of AMSANT and one of the APO NT CEOs) told the briefing that he believed the Royal Commission’s investigation had been extensive, with “a very meaningful community engagement process to hear and share stories about youth detention”.

In addition, experts from as far afield as Scotland, Ontario Canada, New Zealand and Mississippi USA had been called to give evidence about youth justice programs that work.

He said it was clear that the status quo was not acceptable, and the system needed a major overhaul. “We’re looking for wholesale reform.”

“Introducing a single Act would create a whole-of-system ‘paradigm shift,’ resulting in a trauma-informed, therapeutic approach that prioritises the needs of children, young people and their families, and addresses over-incarcertaion of Indigenous youth.”

The need for meaningful reform to the youth justice system in the NT and beyond was also the subject of an impassioned op ed in the Sydney Morning Herald by human rights lawyer, Ruth Barson.

Barson called the response to the Royal Commissions findings “a moment of reckoning for Australia” in terms of how our governments respond. She wrote:

The NT Government should accept each and every recommendation and commit to time-bound implementation. There should be no picking and choosing recommendations.

Likewise, if the Northern Territory is to achieve change, the Commonwealth Government must commit to resourcing implementation.”

The Change the Record Coalition earlier this week, called on the Federal Government to take national action on youth justice issues through the development of a National Youth Justice Action Plan.

The Coalition noted that the mistreatment and torture of children in youth detention was not confined to the Northern Territory and, since the Royal Commission was announced, has been found to occur “in almost every jurisdiction”.

The revelations of abuse and mistreatment of children in prisons across Australia demands national action, involving COAG and our communities, to make a difference to the lives and future opportunities of all of our children.”

International human rights bodies have put Australia on notice to improve… It is time the Federal Government took action.”

APO NT CEO John Paterson also spoke to Croakey’s Summer May Finlay at the NHMRC Symposium on Research Translation co-hosted with the Lowitja Institute, earlier this week, in this short video.

Paterson said the Aboriginal peak organisations would make sure the findings were heard and acted upon.

We will not sit on our hands and watch this report be put on the bookshelves to gather dust (like so many others)… We will be vigilant, we will be monitoring…to ensure that the federal and NT governments act.

We believe there is a joint responsibility for both levels of government to commit the appropriate resources and funding to be able to enable governments, and preferably the Aboriginal controlled health organisations, to take the lead in implementing those recommendations.”

Their response, along with links to the report, can be found here.