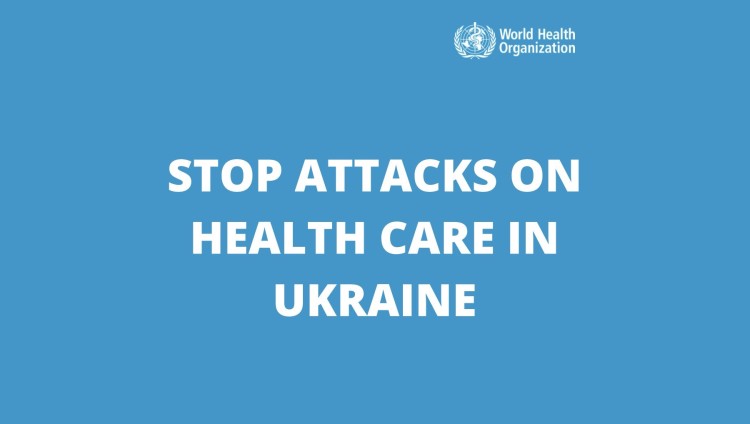 Weapons of mass destruction: what are the chances Russia will use a nuclear or chemical attack on Ukraine?

Introduction by Croakey: An estimated three million people have fled Ukraine since the war began three weeks ago, with several million internally displaced.

By 13 March, the World Health Organization (WHO) had documented 31 attacks on healthcare – and this was before news broke of Russian troops holding health workers, patients and civilians hostage at the Mariupol regional intensive care hospital.

Health Policy Watch reports that Russian soldiers are using the hospital as a base to attack Ukrainian forces, and using the hostages as “human shields”, citing as its source the Media Initiative for Human Rights (MIHR), a human rights monitoring group in Ukraine.

In a joint statement on 13 March, UNICEF, the United Nations Population Fund (UNFPA) and the WHO called for an immediate ceasefire, and cessation of all attacks on healthcare in Ukraine.

“To attack the most vulnerable – babies, children, pregnant women, and those already suffering from illness and disease, and health workers risking their own lives to save lives – is an act of unconscionable cruelty.”

The WHO said it was working around the clock to provide medical supplies across Ukraine, noting that there had been more than 4,300 births there since the start of war and 80,000 Ukrainian women are expected to give birth in next three months. Oxygen and medical supplies, including for the management of pregnancy complications, are running dangerously low. 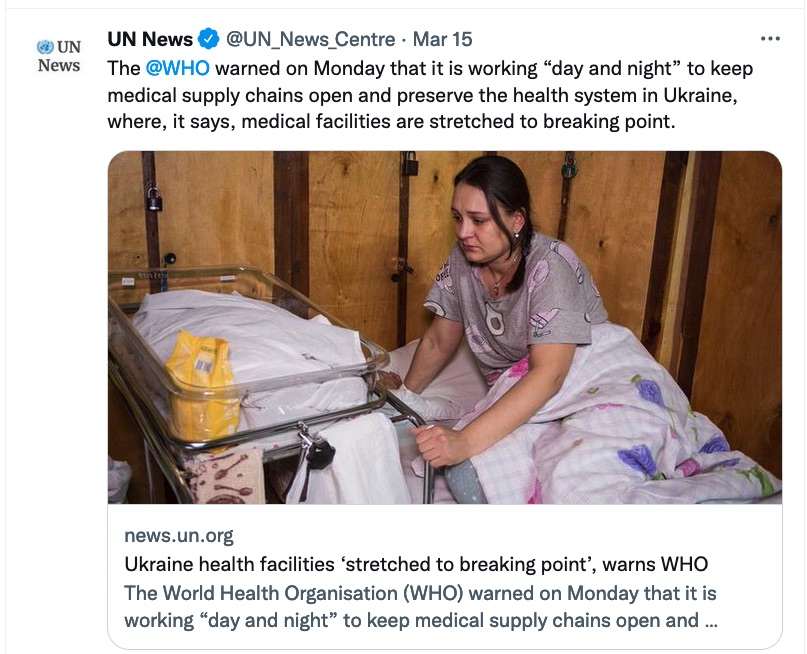 The United Nations World Food Programme (WFP) has warned that the Ukraine crisis is set to exacerbate desperate levels of hunger in war-torn Yemen because of the impact on food prices.

The number of people needing food assistance in Yemen has risen to 17.4 million – an increase of 1.2 million people compared to last year – and is forecast to reach 19 million people in the second half of the year if funding is not forthcoming, the WFP said.

Meanwhile, Syrian and American doctors have arrived in Ukraine via the Union of Medical Care and Relief Organizations (UOSSM), a coalition of humanitarian, non-governmental, and medical organisations providing relief and medical care to victims of war in Syria.

A UOSSM statement said its doctors are uniquely positioned to support aid efforts in Ukraine having operated under similar conditions in Syria for the past 10 years, including dealing with war wounds/injuries, displacement, chemical attacks and a major humanitarian crisis.

Dr Monzer Yazji, a Syrian American doctor, co-founder of UOSSM/UOSSM USA, and leader of the mission, said the same horrors and war crimes witnessed in Syria are being documented in Ukraine, such as the bombing of the Mariupol hospital.

Meanwhile, in the article below, University of Tasmania researcher James Dwyer examines the potential for Russian to use nuclear or chemical weapons. This article was first published at The Conversation.

About three weeks into the Russian invasion of Ukraine, it’s safe to say things aren’t going Russia’s way – and it has yet to achieve objectives that were planned to be completed in the first few days.

The longer Russia’s advance is bogged down, the greater the chance it will consider taking drastic action, which may potentially include using weapons of mass destruction.

As improbable as this is, it’s not impossible. Under what circumstances might weapons of mass destruction be used?

Read more: 3 ways Russia has shown military ‘incompetence’ during its invasion of Ukraine

The weapon of mass destruction most likely to be used is a chemical weapon. Russia once possessed the world’s largest stockpile of chemical weapons, ranging from nerve agents such as Sarin and VX, to mustard gas and the toxic gas phosgene.

Although Russia claims to have destroyed its arsenal by 2017, the use of the nerve agent Novichok during assassination attempts in 2018 and 2020 demonstrates it continues to possess chemical weapons, although the quantities and types (aside from Novichok) are unknown.

According to reports, US and allied officials suspect Russia may be planning (or considering) a “false flag” operation involving the use of chemical weapons, to establish a belated justification for the invasion of Ukraine, despite the obvious logical inconsistency. 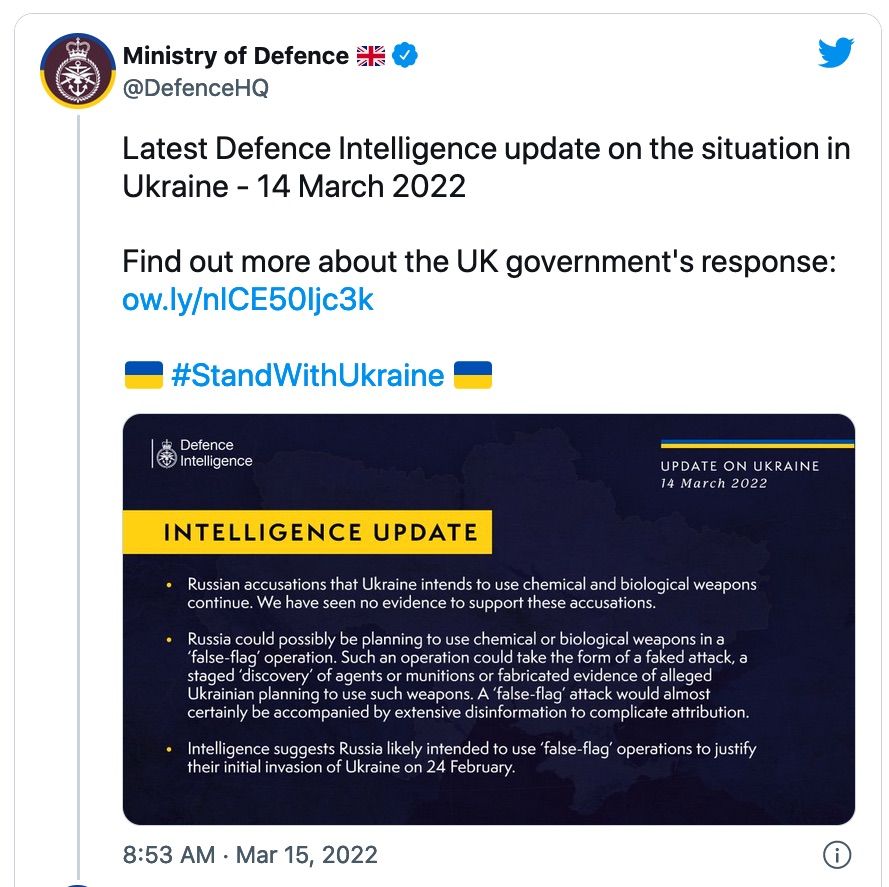 In this context, Russia could launch a chemical weapon attack and blame Ukrainian forces, or attack a small portion of its own forces with chemical weapons to “justify” a response in kind.

Or it may locate a stockpile of “Ukrainian” chemical weapons and use this as a post-hoc justification of the invasion, similar to how the United States used the claim of alleged weapons of mass destruction to justify the invasion of Iraq in the second Gulf War.

While this is all speculation for now, it demonstrates how the spectre of chemical weapons looms over the Ukraine invasion.

If chemical weapons were used, the effects would be horrific – not just in terms of loss of life, but also because the areas impacted would become uninhabitable.

Many chemical weapons persist in the environment. In the case of some (nerve agents in particular), a single touch on the skin is enough to cause death in seconds or minutes. Decontaminating affected areas would be enormously difficult and dangerous.

For now, we have not seen Russian soldiers equipped with the protective equipment needed to operate in a chemical-hazard environment. This suggests chemical weapons use is not imminent.

The other mass destruction threat relevant here is nuclear weapons, both tactical and strategic. It’s estimated Russia has the world’s largest nuclear arsenal, with a total of 4,477 nuclear weapons (of which 1,912 are thought to be tactical nuclear weapons).

Given their focus, they may have lower explosive yields than strategic weapons – but not necessarily. Most modern tactical nuclear warheads have far greater explosive power than the nuclear bombs dropped on Hiroshima and Nagasaki by the US during the second world war.

Operationally, tactical nuclear weapons would be capable of blowing wide, deep holes in opposing lines. As such, they could facilitate a breakthrough of Ukrainian defences, or provide a way to destroy significant targets such as airfields or key staging areas.

Preparations for such an attack would be difficult to detect. Many of the weapons systems being used by Russia are “dual-capable”, meaning they can deliver conventional and nuclear weapons.

While nuclear weapons use is unlikely, Russian President Vladimir Putin has increased the alert level of his nuclear forces, and issued poorly veiled threats alluding to Russia’s nuclear arsenal as a deterrent to NATO intervention in the conflict.

The risk of nuclear weapons use by Russia could increase, however, if Putin is further backed into a wall and Russia feels its progress is being increasingly derailed. This is extremely unlikely, but not impossible.

What is unknown is how the West would react to the use of nuclear weapons. While there would be justified outrage, it may well deter the West from further involvement so as to avoid being drawn into a full-scale nuclear conflict.

This would well and truly be uncharted territory. Nuclear weapons have never been used during a time when multiple nations possess them.

Should the conflict escalate and NATO get involved, the worst possible outcome would be a strategic nuclear exchange between NATO and Russia. In this scenario, both sides would seek the complete destruction of the other, targeting cities and other key strategic targets.

If a conventional conflict between NATO and Russia occurred (which Russia would almost certainly lose), Russia would immediately seek to “de-escalate” the conflict as per its nuclear doctrine.

While this might sound great on paper, in practice it is anything but. What this strategy actually alludes to is: escalate to de-escalate. Russia would aim for a rapid escalation, to the point of using nuclear weapons, to force NATO to back down.

While this is alarming, it’s also coldly logical. Russia calculates NATO may be willing to risk conventional conflict, but not nuclear war. So an immediate escalation across the nuclear threshold could well give NATO pause.

Should it come to this, Russia would likely not target cities or large troop concentrations (as this would risk galvanising support among NATO populations for retaliation).

Instead, Russia would either conduct a final warning shot (such as by detonating a nuclear weapon over the ocean), or hit several strategic targets while minimising NATO and civilian losses. This could include important airfields, ports, road and rail junctions, munitions dumps or fuel storage facilities, as some examples.

The Russian government of course denies it would use this strategy. It insists it would only use nuclear weapons to defend Russia, and not in a preemptive manner.

However, various statements by Russian defence officials over the years indicate a doctrine of de-escalation and preemptive nuclear threats. The US has openly said it considers de-escalation to be Russia’s guiding nuclear doctrine.

Events may transpire that could easily lead to the situation escalating, in which case the risk of a full nuclear exchange is significant.

For example, there have been demands for NATO to enforce a no-fly zone over Ukraine. While this might initially sound reasonable, it means NATO aircraft would need to engage and shoot down Russian aircraft operating over Ukraine. Russia would likely retaliate, and the conflict may well spiral out of control.

NATO intervention of any kind would bring the world closer to nuclear war than at any time in the post-Cold War era. And the potential devastation can’t be ignored.

PrevPreviousOn the road to the South Australian election, politicians need to think beyond hospitals
NextTwo years later, and we’re not out of the woods yetNext