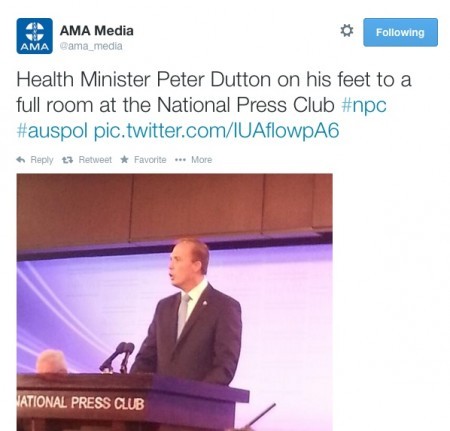 Health Minister Peter Dutton’s expression appeared most sincere today at the National Press Club when he spoke about strengthening Medicare, which he described as “much-loved” by the public and the Government.

No matter that the Budget reveals a clear lack of commitment to enhancing universal health care, as well as a distinct lack of interest, whether you look in the health portfolio or elsewhere, in improving or even maintaining the community’s health.

Given the level of concern in the community and the health sector about the Budget’s impacts – particularly for Aboriginal and Torres Strait Islander peoples, and for the poor, sick and vulnerable (like unemployed youth) – I was expecting Dutton might face some tough questioning from the floor.

There was not one question about the impact on Indigenous health – despite the concerns that are being raised by many groups (from VACCHO to ANTaR and the Close the Gap campaign).

Not one question about the impact on health inequalities, though surely an exacerbation of the health gap between well-heeled and under-healed Australians is a fair prediction.

(I saw only the online version of the session – and would be delighted to be corrected, if there were in fact some probing questions on these issues that did not make the cut).

Maybe the lack of such questions was because the audience, as Dutton himself suggested, was mostly quite well off. Or maybe they were just left speechless after so many examples of unreal speech, where something is so sincerely declared although the reality is something else altogether.

So we heard from the Minister whose Government that has dropped a bomb on years of painstaking national health reform negotiations:

“I have dedicated myself and the Government has, to making sure that in this budget we can provide you with a Medicare system of which you can be proud, of which as you and your parents age, it will provide you with the world-class standard that you know today. That is the undertaking that we have given to the Australian people. And all of the evidence supports the conclusions that we’ve drawn and the direction in which we wish to head.”

And so we heard from the Minister whose support for copayments is widely predicted to worsen access to health care for those who need it most, as well as having worrying implications for public health and control of communicable diseases:

“Access is incredibly important – we don’t want to deter people from going to doctor.”

And so the Minister gave every appearance of believing his own rhetoric that the “Senate should listen to messages of doctors and patients across the country…if they hear that message they will be supporting changes of which we can all be proud.”

Perhaps he thinks the Senators won’t have picked up on campaigns like #stopthecopaycuts from Australian Doctor (seems most unlikely that the magazine would do a campaign like this if it wasn’t sure of readers’ support) or this #copaynoway from the RACGP or the grassroots #copaystories campaign.

Perhaps he thinks they will be deaf to the noise about public hospital funding cuts...

…and oblivious to the evidence about the impact of copayments on immunisation rates. 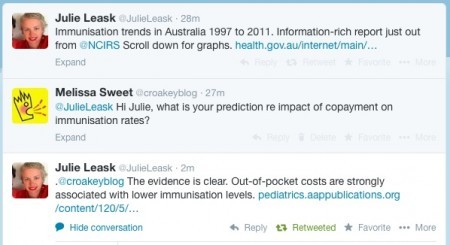 This Budget is going to do damage to the health system that will take decades to repair.

My key take-home messages from today are:

1) That the Government sees the health system primarily as a Budget issue – every issue is approached in terms of its impact on the Commonwealth’s bottom line.  This means that once a cost is shifted off the Commonwealth’s balance sheet (to consumers, states, PHI etc), it is basically off the Government’s radar, regardless of the impact of the cost shift on overall health care costs, health status or efficiency of the system.  On this basis the Government can ignore any arguments about the impact of the GP co-payment on hospital costs – as a consumer and/or state health issue it is no longer the responsibility of the Commonwealth.

2) The Government will be looking for deals on the co-payment with the balance-of-power senators which preserve the symbolism of the co-payment but address some specific issues that have been raised by stakeholders – so no backtracking on the principle of an up-front payment, but perhaps some wiggle room in its application, particularly for people with chronic conditions.

3) The Government has no idea what private health insurance should be doing in relation to primary care but would quite like a private health fund to come and take over some of the responsibility for getting the primary health care sector (minus all those ‘extra layer of bureaucracy’ Medicare Local staff who will no longer be around to help) to focus more on prevention and population health (and receive the flack if it doesn’t work).

4)  Quoting previous Labor leaders and other health experts as saying that the health system is ‘unsustainable’ only works to a point.  When it involves outlining a 25-year history of political leaders warning of imminent health system collapse, punters may legitimately become cynical about the political expediency of using these threats to justify budget cuts.

5) Medical researchers around the country must be simultaneously excited by the prospect of new research money but somewhat terrified by the cavalier predictions of the Minister that the National Medical Research Fund will find cures for dementia, cancer and any number of other diseases. 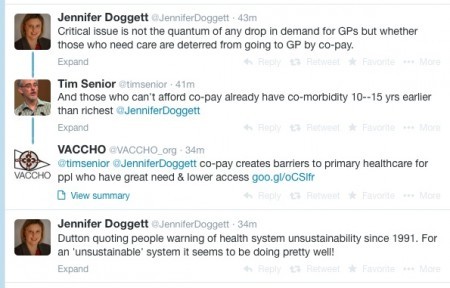 An excellent analysis (by Jennifer Doggett), and I concur.  Would add that I think it’s quite possible that the tendering process for the new Primary Care Networks will allow PHI funds to be involved.  Would they want to?  Have not been all that eager to enter the primary care space and I recall that one of the CEOs said that such activities would substantially increase the cost of health insurance. 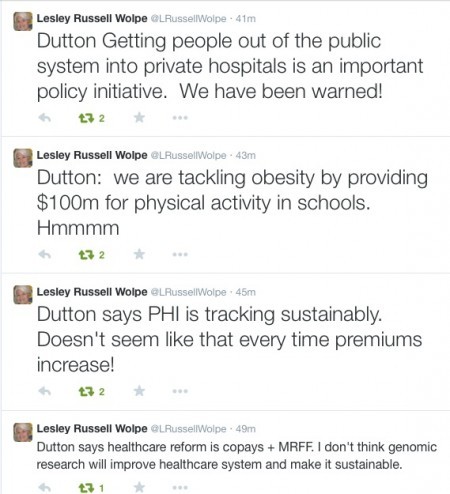 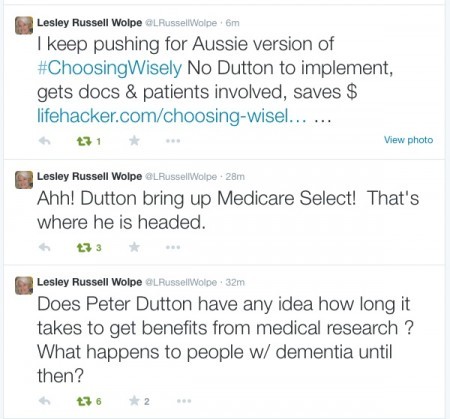 Asked for her take-home message from the event:

Meanwhile, Alison Verhoeven, CEO of the AHHA, has called for Dutton to release the modelling which predicts the copayment will lead to only a one per cent drop in GP visits. 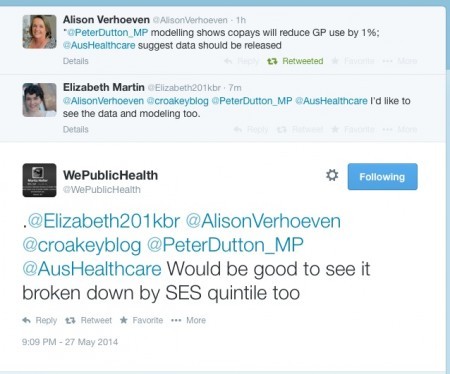 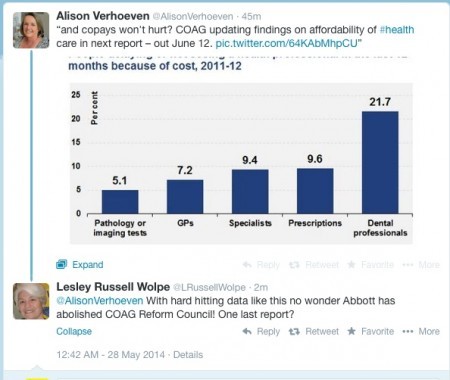 Some were impressed by the Minister’s delivery.

On a similar note, Mark Metherell, a former health correspondent for the SMH, said:

“He spoke without referring to notes at all as far as I could see, the first health minister to do so at a press club address that I can remember. Like most politicians he did not directly answer many of the questions but he appeared to be very much on top of the details of his brief even if that brief remains unclear on ensuring the sustainability of the health system.  Peter Dutton is shaping up as a tough operator.“ 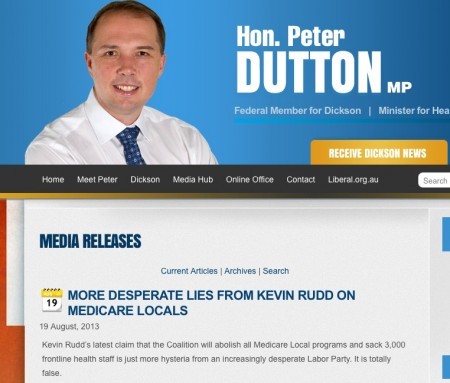 PrevPreviousThe Federal Government’s broken promises on health will take a serious toll, warns major health group
NextA challenge to Budget Estimates Hearing – give us some clarity on the extent of Indigenous health cutsNext