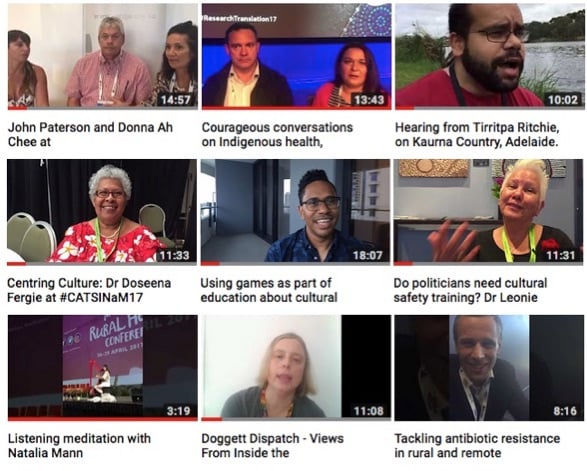 Welcome to your summer viewing guide – from Croakey TV

This year, we published more than 170 videos at Croakey’s YouTube channel.

They include interviews from #CroakeyGO walks, and from conferences and other events attended by members of the Croakey connective, and canvassed topics ranging from climate change to Indigenous health, mental health, and tobacco control.

They ranged from recordings of “listening meditation” at the National Rural Health Conference in Cairns to a joint interview in Canberra with Minister Ken Wyatt and Ms Linda Burney about the significance of the 20-year anniversary of the Bringing Them Home report (watch this interview here).

Highlights included Foundation CEO Richard Weston interviewing his mother Thelma Weston about her long career in health (watch this interview here), Marlene Longbottom talking with visiting Water Protectors Janelle Cronin and Zachary Wamego about the need to “start taking care of Mother Earth”, and Croakey editor Jennifer Doggett’s report on the 2017-18 Federal Budget and why it was a “medicine budget and not a health budget”.

Below we offer a dozen of our favourite clips for your summer viewing interest. Enjoy! (And there is plenty more to see here).

Indigenous health researcher Professor James Ward was at the #ResearchTranslation17 conference in Brisbane when news broke  of the #MarriageEquality survey results. Watch his elated reaction:

As the Nobel Peace Prize was being awarded in Oslo to the International Campaign to Abolish Nuclear Weapons (ICAN), supporters gathered in Melbourne to hear from Karina and Rose Lester, daughters of the late Yankunytjatjara Elder Yami Lester, who helped bring about the Royal Commission into British nuclear tests in Australia. They continue his campaigning work, highlighting the disproportionate impact of testing on Indigenous peoples.

Dr Rick Brennan, an emergency physician from Australia who is director of emergency operations at the World Health Organization, is interviewed by Amy Coopes after delivering a keynote presentation to an Australasian College for Emergency Medicine conference in Sydney, #ACEM17. He describes the “unprecedented” demand upon the WHO to respond to global crises.

At the Victorian Mental Illness Awareness Council (VMIAC) meeting in Melbourne, Marie McInerney interviews Indigo Daya, senior consumer adviser to the Office of the Chief Mental Health Nurse in Victoria – about trauma, rights, and barriers to consumer participation and influence.

Almost a year after he left Perth on an epic walk for justice across the continent, Clinton Pryor arrived in Canberra in September to a warm welcome on Ngunnawal country from a crowd gathered at the Aboriginal Tent Embassy in front of Old Parliament House. People travelled from Perth, Melbourne, Kalgoorlie and other places to bear witness to 27-year-old Pryor’s arrival, greeting him with cheers, tears and speeches calling for justice. As he walked across the continent, Pryor, a Wajuk, Balardung, Kija and Yulparitja man, was making history, gathering stories, connecting up people, and inspiring many – including six-year-old Isiah Hobba. This clip shows how the Canberra event reunited two old school friends who hadn’t seen each other for 60 years – Dr Noel Nannup and Kim Leevers.

Public health researcher Dr Therese Riley was interviewed during a #CroakeyGO walk in Melbourne about Prevention Tracker – working with communities in modelling and influencing prevention systems.

Tirritpa Ritchie, a Kaurna man, occupational therapist and academic, hosted a #CroakeyGO in Adelaide in October. In the interview below, he discusses how he uses a walking classroom in teaching students at the University of South Australia.

Veteran health journalist and now an academic Dr Ray Moynihan is interviewed by Marie McInerney at a Choosing Wisely conference about overdiagnosis. He is excited by the serious attention now being paid to “too much medicine”, and describes a growing social movement.

Dr Liz Hanna, president of the Climate and Health Alliance, is interviewed after the launch on 22 June 2017 of a “Framework for a National Strategy on Climate, Health and Well-being for Australia”. The framework, reported in detail here, is an example of civil society showing leadership in the absence of political leadership to address climate and health concerns.

At the #ResearchTranslation17 conference in Brisbane, Summer May Finlay talks with Dr Carrie Bourassa, a senior researcher from Canada and a Métis woman, about “the elephant in the room”  – the importance of racism as a determinant of health.

PrevPreviousThe health of future generations is at stake: Helen Clark
NextA call to civil disobedience as we face a planetary health emergencyNext